New Year's Eve, my husband, The Gryphon and I partied with friends at The White Rabbit's place, who was hosting his annual party. 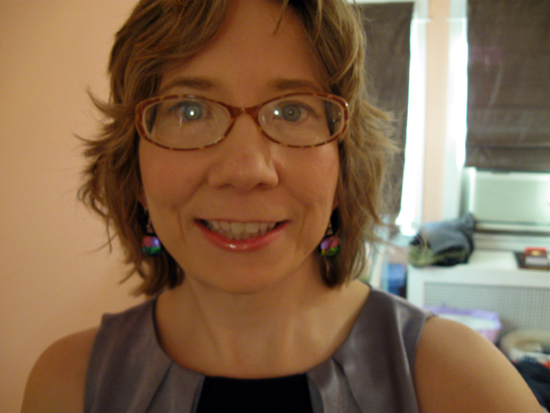 Me, ready to party
(Faster-loading version)

After taking care of some errands and dropping our doggie, Una, at the pet sitter, I drove through bitter winds, arriving about 5 p.m. I approached the front door, loaded with items.

The Gryphon, who had arrived before me, helped me carry the rest of them inside. We'd brought a few food items to share, including some clementines, some crackers and cheese, and some chicken which would be grilled later.

I wore a new Vera Wang shirt I'd bought from Kohl's at a deep discount (love those post-holiday sales), and The Gryphon wore his favorite paisley shirt. 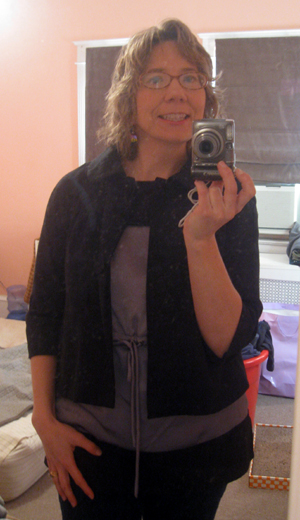 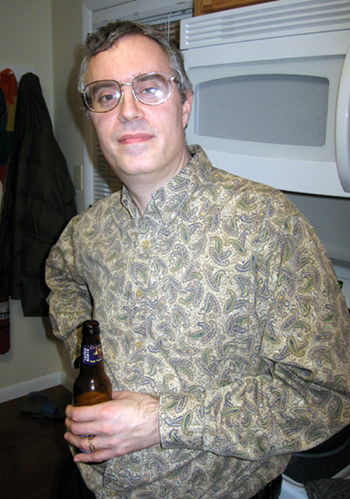 A number of people had already arrived, and over the course of the evening we had record attendance, considering that some of the usual guests, such as The Court Wizard, could not make it (in his case, due to snow where he lives). Over the course of the evening, in addition to The White Rabbit, The Gryphon and I, the guests included: The Martial Artist, The Book Lover and their son; The Cousin, The Photographer, their two daughters, and a friend of the daughters; The Cheshire Cat and The Paper; The Fruit Lady, The Quiet Man and their daughter; The Bhoo and his two daughters; The Dormouse, The March Hare; Batman; Batman's Roommate; The Warrior Princess; The Paralegal; The Pop Junkie; The Con Ops Guru; The Voice; My College Roommate's Ex-husband; The Devil's Advocate; The Big Kahuna; and a fellow Otakon staffer for whom I currently don't have a nickname, but who previously ran the AMV Contest.

I served the clementines, cheese and crackers, which were all popular. I was happy to learn The Paper had brought some ready-made fajita fixings: some tortillas; delicious chicken; a healthy mixture of pineapple, beans and cilantro; salsa; and both regular and light sour cream. She's always so considerate: bringing things that appeal to a variety of people.

In addition, I loved the baked pumpkin crisp brought by The Cousin. (By the way, I would love the recipe, for both that and for the tortilla fixings).

There was plenty more to try, and even though I had little pieces, it wasn't long before I was full. Well, if you can't splurge on New Year's Eve, when can you?

Since there were lots of people there, guests had come prepared, such as these spaghetti fixings, brought by The Bhoo. When I spotted the pot on the stove, I called out to him, "That's not how you make spaghetti!" He didn't hear me.

Someone else, nearby, though, quipped: "Yes, it is. You put it in a pot on the stove. What's wrong?" Well, kinda left a step out... 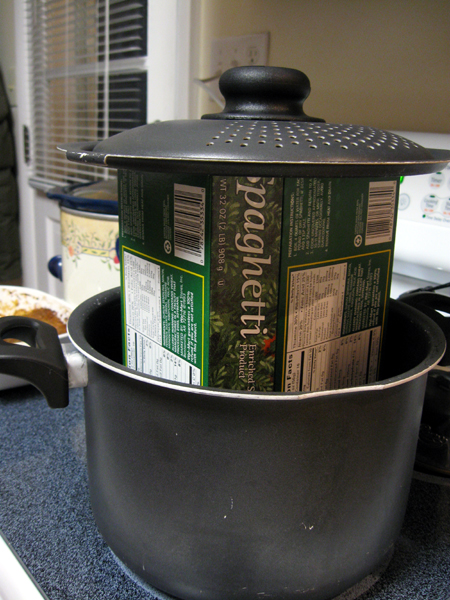 The White Rabbit had planned to do a little grilling out back, which is reasonable when it's winter. But no one expected it to be so windy and cold. I can't remember the last New Year's Eve when it was this bitter. Getting the grill going was easy enough, but The White Rabbit soon discovered that the grill would not stay lit with the lid open.

After re-lighting it, he devised a solution: close it up, set a timer and wait in the warm house until it came time to flip the meat. This solution produced well-done meat, but at least it was reasonably trouble free. I felt bad for both The White Rabbit and The March Hare, who was helping him with what I called Extreme Grilling. 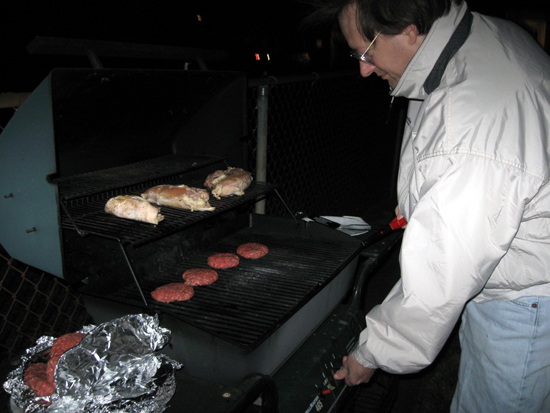 I tried to get around to different rooms and talk to various people, and over the course of the evening, the topics varied widely: from snarky repartee to pop cultural discussions, involving a high-spirited discussion about Internet culture with The Warrior Princess and Batman, who were finishing each other's sentences, laughing wildly and then giving each other a high five. In an entertaining exchange, Batman said he was thinking of taking another job overseas. He'd taught English in South Korea for a couple years and enjoyed it.

While most of the party guests urged him to stay in the U.S. so that we could see him more often, The Warrior Princess insisted he ought to take a job in Germany so she could visit. She has recently become enamored with German rock music and has become fascinated with the pop culture. I asked her why she didn't just take a job in Germany, and she said her job wasn't so easily moved (she's a landlord for several properties in Southwestern Pennsylvania). This theme kept occurring throughout the evening, and at every opportunity she'd say, "I know! You should move to Germany."

I also got to see the adorable toddler of The Martial Artist and The Book Lover, who is between the ages of my niece and nephew. 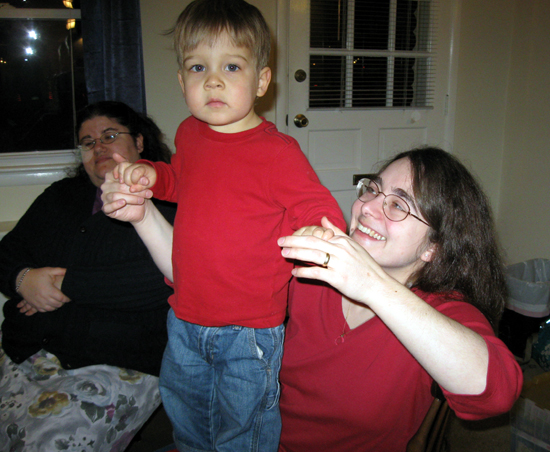 Compared to previous years, there weren't as many board games played. The Devil's Advocate, who had brought a number of games, explained why the next day. He told me that he usually waits until there's a natural lull in the conversations. As long as people are having fun socializing, he doesn't suggest a game. This is just an idea of how animated the discussions were.

The teenagers, though, did hang out downstairs, playing Guitar Hero and the board game, Monopoly. I walked down briefly to check it out and got to talking with The Pop Junkie, who was waiting his turn to play Guitar Hero. As we argued over whether Keanu Reeves was a horrible actor (hello, Bram Stoker's Dracula. I mean, like whoa, the guy is bad.) Our conversation was interrupted by a commotion at the Monopoly board, where things had taken a surprisingly physical route, with the girls play fighting over a discrepancy. Then one of them shouted, "Earthquake," and pounded her fists on the table, making all the houses bounce around.

Agent Smith and his wife, The Costumer, were there in spirit. He called and talked to a number of people, sending his New Year's Eve wishes.

About 10:30, I noticed that The Devil's Advocate, The Big Kahuna and The Con Ops Guru were setting up a game. I asked if I could join them. They said sure. It was a space-based German card game, similar to Citadels, Bohnanza, or Puerto Rico. Unfortunately, I can't currently remember the name, except it had the word "Space" in it. [ETA: The Gamer tells me that it's called The Race for the Galaxy. Thanks!]

This one had some added complications, with multiple icons and special notations on the cards, which made it difficult for me to track as a first-time player. Your goal was to build worlds, typically planets, space stations or mining sites. You can produce goods on them, which can be traded for cards that will allow you to build more planets. The ultimate goal is to acquire the highest number of victory points, acquired by selling goods, building worlds, or taking advantage of special cards. It's the kind of complex, strategy-based game The Devil's Advocate loves.

I actually did pretty good for a first-time player. Although I was last, I was just behind the third-place finisher. I wouldn't have done as well, however, without the help of the other players, who offered plenty of advice.

When I looked up from the game, I realized The Photographer was wearing the fez I'd seen him wear occasionally at previous parties. It seemed to suit the festive mood. 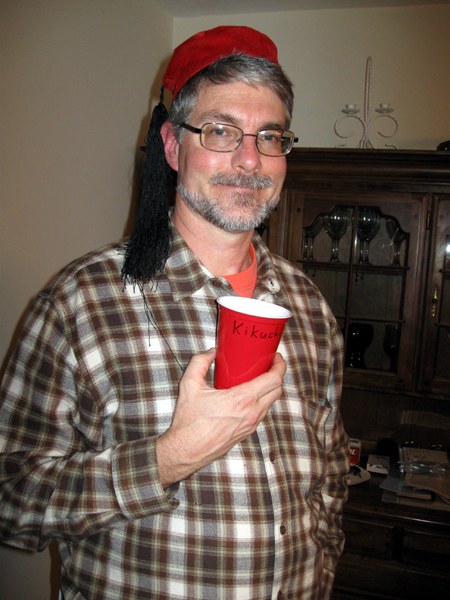 For fun, The Devil's Advocate tried it, as well. It looked so good that we said next year we should bring fezzes for everyone. 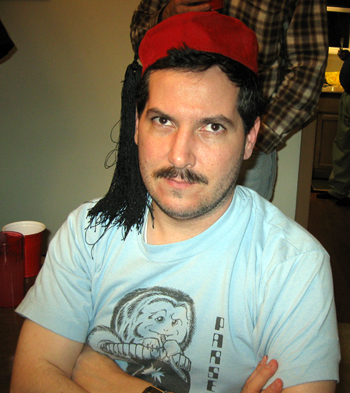 As midnight approached, The White Rabbit began taking requests for either champagne or sparkling grape or apple juice. The Pop Junkie and I helped get all the champagne flutes and wine glasses. 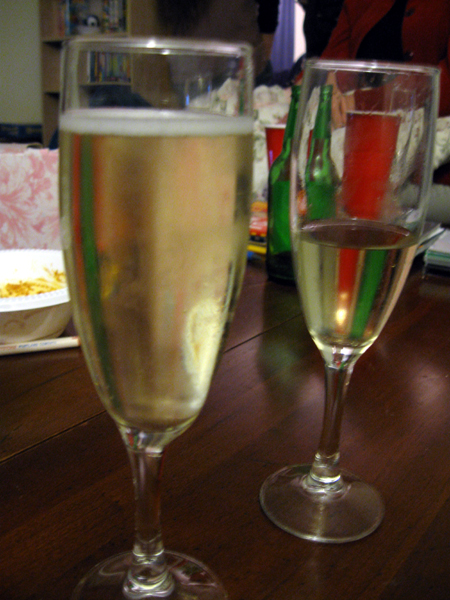 He pulled out a TV and turned it to the network that got the best reception. This happened to have Ryan Seacrest hosting. We wondered aloud if they could just drop the ball on him.

I gave The Gryphon and big kiss before snapping a few pictures of the midnight festivities. Someone began singing "Auld Lang Syne," and a small group joined in. 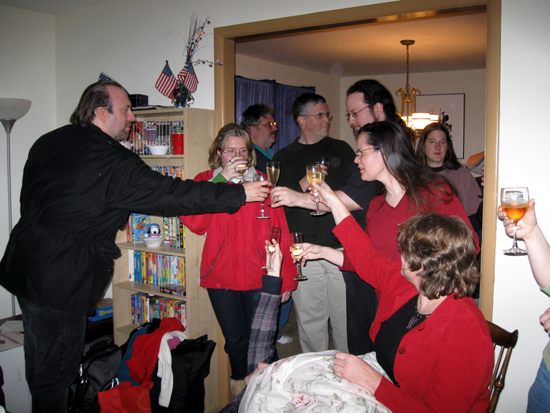 The Photographer and his oldest daughter, who had already prepared his miniature carbide cannons on the front porch, set them off. We heard a few firecrackers elsewhere in the neighborhood. It was so cold and windy that the cannons didn't work properly at first, although they did manage to get a few successful fires.

Most of us didn't stay outside too long, because it was so cold, retreating to the warmth of the living room.

Shortly after midnight, a number of people left, including those with children, if they weren't staying overnight. The rest of us stayed up for a couple hours longer, talking, until everyone began to droop. That's when we threw air mattresses, pillows and blankets down to claim our square footage of crash space.

I would have slept really well, except that our air mattress has developed a leak. As we neared morning, we sunk closer and closer to the floor. When I awoke, the place was clearly in need of some tidying up. It's amazing how much more cluttered and messy a room looks once all the guests are gone. 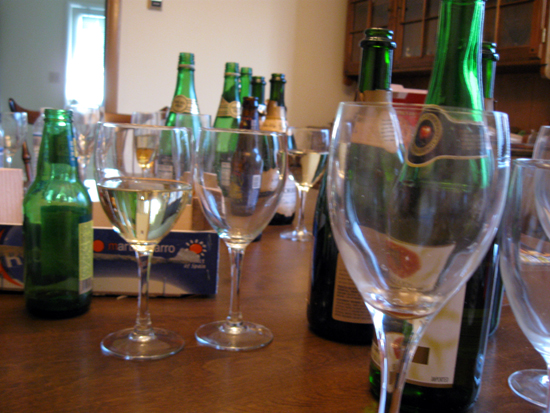 Our somewhat uncomfortable sleep didn't stop The Gryphon from getting up and making everyone a delicious breakfast, called a Dutch Baby. It's a German pancake which is sort of like a Yorkshire pudding, light and filling at the same time. He makes them occasionally for me, and I love it with either a little sugar on top or some fruit preserves.

Everyone loved the breakfast, partly because of the wonderfully Swiftian name. "You ate what?"

We relaxed around the table, eating breakfast, drinking coffee, and chatting until people packed up and made their way home, wishing each other one last time, "Happy new year!"

Moral:
Grilling is easier in the summertime.