This was a good weekend for me, because not only did I get a chance to relax, but I started making progress towards my resolutions. In fact, with the help of my husband, The Gryphon, I've already crossed off one short-term goal. 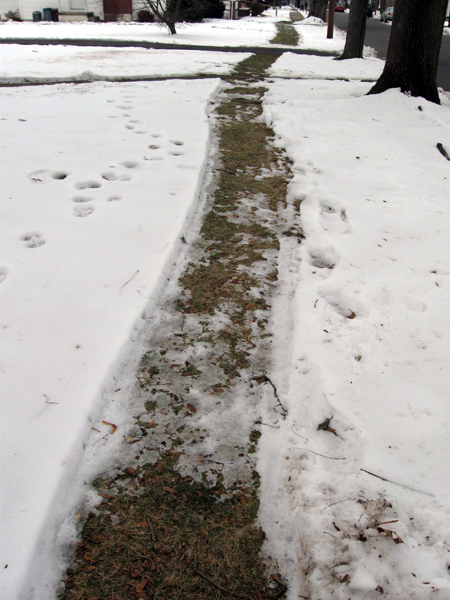 The path is clear
(Faster-loading version)

On Saturday, we didn't sleep in as late as we usually did, and we decided to dress a little nicer than we normally do on Saturdays to have breakfast at Maia. Then, we would drive to MicroCenter to pick up a new burnable DVD drive for my computer.

The new burnable DVD drive would allow me to use store data on DVDs, which can store more than CDs. This will help me with my archive project, during which I intend to create digital archives of all my old photos and radio shows.

While in MicroCenter, we picked up some blank DVDs and looked through the computer books for something The Gryphon could use when redesigning Wild Violet, which we intend to start as soon as I get the Winter issue finished.

We also stopped at a Staples to see what sort of filing cabinets they have. I've decided to replace the one in my office that is, effectively, a two-drawer filing cabinet, since one of the drawers is broken. I might as well use that space more efficiently.

At home, I worked on Wild Violet for much of the afternoon, and I got page layouts done for the entire fiction section. Then I helped The Gryphon prepare our dinner, a homemade turkey and root vegetable calzone (The Gryphon's idea, based on items we had available, plus a few items from the grocery store).

That evening, we watched The Circle of Iron (The Silent Flute), a movie that had been recommended to me by The Cousin. She had told me about the historical context of the movie, which got me interested. The film was based on an idea from Bruce Lee, and he'd helped write the original script, written by two of his students. Not produced until after his death due to various complications, the movie starred David Carradine in four roles that would have been played by Bruce Lee.

The lofty goal of the film: to incorporate Zen philosophy into a martial arts film. The problem was that the martial arts scenes weren't very well-choreographed, so the movie never achieves the impact of even the early Bruce Lee films. While the fight scenes would have been better, had Bruce Lee done them, it's unlikely he could have pulled off the acting required by the four roles. Still, the movie is interesting as a cultural artifact, for someone like me, who's interested in Bruce Lee.

I stayed up a little bit later to go through my poems for a project the next day. The neighbor whom I'd previously referred to as The Rasta Guy because of his dreadlocks, which he keeps under a knit cap, got to talking with me while I was walking Una. I found out that he's a jazz musician and is working on a new album, to feature spoken word and jazz. When I told him I was a poet, he invited me to record a couple tracks. I'd told him to contact me after the holidays, and on January 1, he called me. We made arrangements to get together in his home studio on Sunday.

For the session, I took along my entire second poetry manuscript, because I wasn't certain what would work. I'd put a few poems on top that I figured were the best choices. When I arrived, he let me in, and I saw that his small apartment was set up mostly as a studio. In addition to a small couch and a small table, most of the floor space was taken up with keyboards and his digital mixer. Stacks of CDs and floppy disks were all over. The floppy disks, it turns out, is how he saved prerecorded rhythms on his keyboard. They weren't in any apparent order, but he seemed to know where everything was.

I sat down and talked to him about the poems I'd brought, reading a few out loud. The Gryphon had urged me to use "Do Something Ultimate!" I wasn't sure, because I thought it might not be right, but The Jazz Keyboardist (as I'm now renaming him), really seemed to like it.

He set about finding a background rhythm that would work. When we first tried the poem with it, I felt it was fast, so he slowed down the tempo. He laid down about 3 minutes of rhythm on the first track. Then he showed me how the mixer worked and how I would record my track by hitting record when I was ready, then the music and then reading my poem into the microphone, on track 2.

At first, I stumbled over my words a couple times, but then we found a version we liked. He played that back, with the background, and added more keyboards. Then he mixed the whole thing down to a total of just above 2 minutes long.

In the meantime, The Jazz Keyboardist's lady friend arrived. They exchanged Christmas gifts, and he gave her some earrings she'd left behind. She sat at the table and watched us work, commenting about how impressed she was with the results. It was nice to hear that from someone who admits that she doesn't read a lot of poetry. If she enjoys it, than maybe others will, as well.

We decided to do one more poem, so I settled on "Tether Me to My Sponge of Cells," which was published last year in Mad Poets. It's a very different poem: free verse, and more serious. That made it a little more challenging to read with the music. This time, after selecting a prerecorded rhythm track, The Jazz Keyboardist added more keyboard before having me read my poem on another track.

This time it only took me two tries, but we all decided we liked the first take better. He mixed that one down and put them both on a CD for me to take with me. He cautioned me, though, that I should wait until I secure the copyright and publishing rights before sharing them online. As soon as I get that taken care of, though, I promise I'll share them.

I don't know if both tracks will make it onto the album, but I wouldn't be surprised if he used "Do Something Ultimate!" We all agreed it was superb, and The Gryphon loved it when he heard it later.

This wasn't my first time recording, but I hadn't sat behind a board since my WPSU days, so I was a little rusty. Still, even though it's digital now, the principles are the same, and it came back to me quickly. I've missed it.

Like Anderson Cooper, though, I can be a bit hyper critical about the sound of my voice. Much as I try, I've never had those rich, resonate tones of professional radio announcers. Still, I reasoned that there's a certain, nerdy charm to my voice. After all, three people already told me they liked it. Hopefully, when I share them with the wider world, others will enjoy the tracks, as well.

By the end of the weekend, I was in really good spirits. Sunday, The Gryphon installed my new burnable DVD drive, allowing me to cross off the first short-term goal in my Archive Project. My next short-term goal will be to move the older digital photos from my hard drive to archival DVDs (with backups). I'll also make sure those photos are uploaded to my Kodak Gallery account, so that I have an off-site backup.

It's just my first weekend after New Year's, and I'm already making progress towards my resolutions. This week, I'll work on some of the other short-term goals.

Moral:
Once you learn something, it's easier to relearn it.