This was another productive weekend for me, as I accomplished some important tasks related to Otakon, home decorating, and Wild Violet. 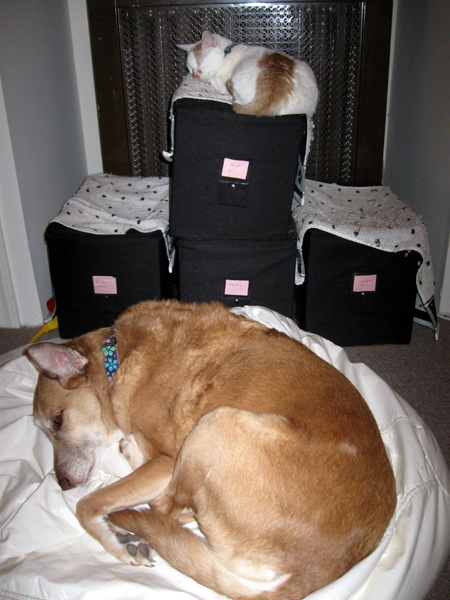 Una and Luke, not crossing things off their "to do" lists
(Faster-loading version)

On Saturday, I met with The Pottermaniac, the previous head of Press Relations for Otakon. She wanted to give me some materials and to discuss the general duties of the job. As I might have already mentioned, I will be running Press Relations for the 2009 Otakon.

The Gryphon came along, bringing his laptop to keep himself occupied. We met at the Cosi in Bryn Mawr and talked over lunch.

I've already had my first Otakon 2009 nightmare. Last night I dreamt I was vacationing with my family when I realized it was Thursday night of Otakon and I was hours away from Baltimore, where I should be setting up the Press Relations room. Worse than that, I hadn't done anything. I hadn't even found a staff, so I had nobody I could call and give instructions on setting up the room.

In my dream, this was frustrating, but in real life, I know that I would call one of the Otakon officers, as well as my immediate supervisor, the head of Guest Relations, and apprise them of the regrettable situation.

The "punchline" of the dream was that I was thinking, "It seems like just yesterday that I was talking to The Pottermaniac about what needed to be done. I can't believe Otakon is already here."

After our meeting, which ended much more auspiciously than my dream, The Gryphon and I drove to Furniture-Rama in Lansdale. We had scoped out a couch back in November, so it was probably the easiest sale that this particular sales associated ever made. As we walked into the store, he greeted us, and he asked if he could help us.

"Yes, we're here to buy a couch," we said, and marched right up to it. I pulled out my notes, confirming that it was the same model and color that we'd liked: the Ashley Cityscape in Taupe. "We want that one."

So he happily introduced us to the man behind the counter who would help us with the transaction, telling us to call him "Uncle": ''We're all family here." They took our payment information and arranged to deliver it next Saturday. They'll be calling us to confirm delivery sometime Friday, he said.

Major redecorating task accomplished. Ah, it feels so good to cross things off!

On the way home, we stopped to eat at a Mexican restaurant in Norristown we've been to recently, Taqueria La Michoacana. This time I tried something a little different: shrimp in a chipotle sauce, served with peppers, Spanish rice and guacamole. I've noticed that they really go to town with the sauces, putting so much on the plate it's almost like soup! The sauces are good, but they could stand to be a little more moderate.

Saturday night, we watched the rest of the first disc from season one of Dexter, which had been recommended to us by one of The Gryphon's coworkers. I must admit: when I watched the first episode, I wasn't sure why anyone would want to follow this character. He is, after all, a serial killer, even if he targets other murderers. The show definitely grows on you, a blend between a drama and a police procedural with an intriguing continuing mystery, as he tracks an elusive serial killer known as The Ice Truck Killer.

At home, I watched the rest of The Band's Visit, an independent Israeli film about an Egyptian band, who get lost on their way to play at the dedication of an Arab cultural center in Israel. For one night, the band members depend on the locals, interacting with them and making bonds across cultural differences.

While the film is quiet, it is also charming. I liked the way the director stitched together the story through the use of music, whether performed live or in the soundtrack. Watching the making-of documentary, I learned that the actors were excited about the project, because it's rare that Israeli and Palestinian actors get a chance to appear on the same screen. In a way, the movie itself is a testament to the possibility of bridging cultural differences, a message that seems so important today, in the face of the Israeli-Gaza conflict.

For dinner, we ate at one of our favorite Center City restaurants, Passage to India. It's an Indian buffet with a continuing array of interesting foods, including many vegetarian offerings. We also love their desserts, which contribute a sweet ending.

I dropped The Gryphon at his weekly meeting of PAGE (Philadelphia Area Game Enthusiasts), then came home and worked on Wild Violet. I got almost completely done designing the poetry pages for the Winter issue.

In other Wild Violet news. The Gryphon and I have been talking about what to do with the redesign. He has some new ideas based on a platform he's using at the Web design company where he works. Sunday he showed me a couple examples, which looked promising. We'll be continuing our planning discussions over the next couple of weeks, especially after I'm finished with this issue.

Working on the short-term goal related to publishing my second poetry manscript, I ordered books from two of the poetry publishers recommended to me by fellow Philadelphia poet Peter Krok. That way I can evaluate the quality of the publishing and decide whether to submit my work.

I also caught up with a little e-mail correspondence. Sometimes, when I want to write more than a sentence or two, it takes longer for me to get around to writing it.

And, of course, I sent in my ballot for The Real LJ Idol, which this week was a contestant-only vote. We were supposed to provide the moderator with a list of the 25 people we wanted to vote for. Considering there are 74 contestants, this was a difficult choice, to be sure. I eagerly await today's results, which will be coming sometime this evening, after all the votes are received and counted. Wish me luck!

Moral:
Crossing off items is a great way to feel good about the weekend.