This weekend, as promised, Furniture-Rama delivered our couch. They called the night before to give us a window for delivery, and on Saturday, we ate breakfast at home and tried to keep the animals upstairs, so they'd be out of the way.

We also took our old couch out to the curb. Without its cover, it looked very worn and forlorn. 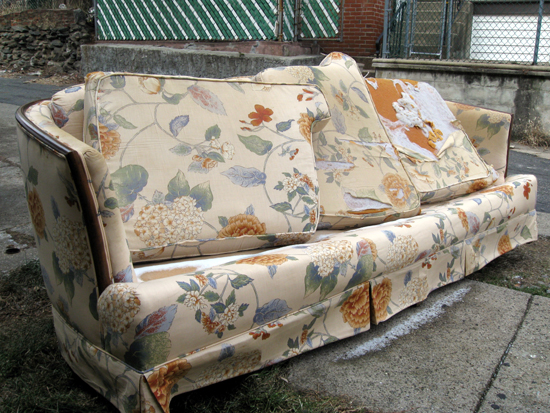 Our old couch on the curb, ready for the trash man
(Faster-loading version)

I inadvertently hit on the perfect solution: take a nap. Our doggie, Una, and kitty, Luke, like to take naps with me. So we were all in the bedroom when the delivery men arrived. The Gryphon shut the door on us, and I kept the animals company while our new couch was delivered.

Our new couch fits perfectly and is comfortable. It makes our living room look decidedly nicer. One of the best aspects of it: when we return after a long trip, we don't have to put the cushions back and straighten out the couch cover. When Una lies on it, the cushions no longer move. 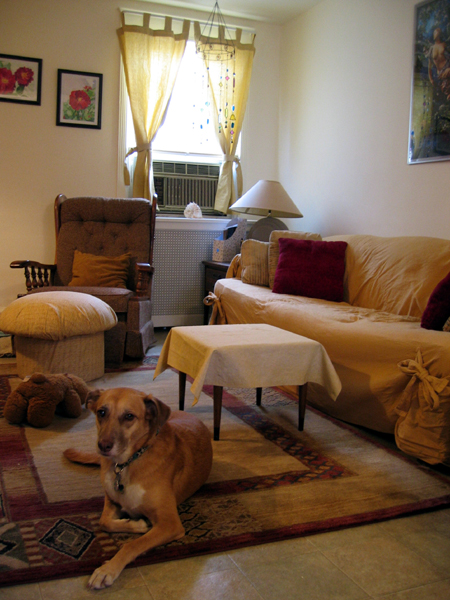 Una looking a bit forlorn in front of our old couch,
covered with a gold couch cover.
(Faster-loading version) 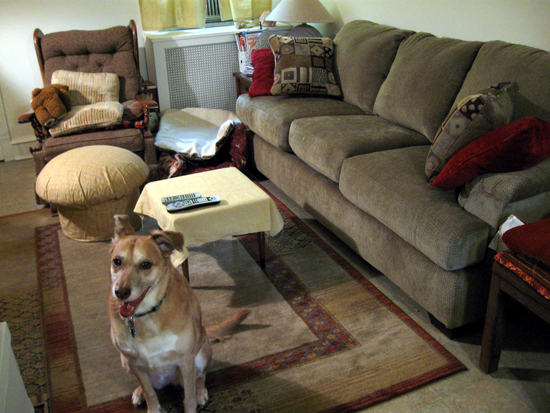 I spent some time this weekend working on Wild Violet. Of course, I couldn't do as much as I wanted to on Sunday, because I woke up with a migraine and spent half of the day recovering.

I also had some interesting dreams this weekend. Let me tell you about a few.

In the most vivid of them, I was walking in suburban Philadelphia with my camera and happened across a group of young people dressed in formal wear. I surmised they were getting ready for a wedding. Two women were apparently the bridesmaids, and they were wearing dramatic dresses that reminded me of some I saw in the Faeriecon runway show. They had fitted bodices with full-length pouffy skirts. The dresses were in two different colors but seemed to go together.

The groomsmen, all of whom looked to be in their early 20s, wore retro Victorian-looking suits in different neutral covers. A little boy, probably the ring bearer, wore a similar suit, with a very ruffled shirt.

One young man seemed a bit more nervous than the rest, and his suit was a little different, a little more modern. I surmised he was the groom. They were all waiting around for the bride to arrive, no doubt.

As I approached, two young guys with long, bleached-blonde hair, wearing jeans and T-shirts, were going off with a photographer to be photographed for a record album. Somehow I knew that, while they were friends of the wedding party, they weren't participating in the wedding.

There was no other photographer in sight, which is probably why, noticing my camera, one of the groomsmen asked me when the pictures would be ready. I told him I wasn't the person to ask. But since I had my camera, I took some candid shots of the wedding party waiting for the wedding to start.

Then, as if on cue, everyone broke into action, entering a nearby cottage-style rowhouse, going down in the basement to a large community room for further preparations. I caught the groom's attention and asked for his e-mail address, promising to get him copies of the pictures. But I had to fumble around in my camera bag for my business card, since I'd just been to an event where I collected a lot of them, and I kept pulling out other people's cards. Finally, I found one.

I wanted to make sure I'd be able to get him the photos, though, because people often get really scattered after their wedding, so I still wanted his e-mail address. I dug out a pen and a small notebook from my camera bag (which would be nice things to carry in real life), and he wrote down his addy for me. Only after he'd disappeared inside the building did I realize that it was barely legible. Of course, this is not unusual for a dream, when text is usually unreadable.

As far as dreams go, this was a fairly pleasant one. I happened into a situation and made myself useful. I'm not sure what it means, except that, being wedding related, it probably has something to do with me wanting to get back to work on my wedding book. Of course, I've postponed that for the time being to finish the next issue of Wild Violet.

Another dream was far less detailed but left me with a far different feeling. On Saturday evening, the same night I got a headache in the middle of the night (not waking up to take pain medicine until morning), I dreamt my sister was chastising me. She was calling me a fraud and saying that I called myself a writer but didn't spend enough time working on my writing. I started to cry, believing that she was right.

My sister and I are close, and often when I dream about her, she really represents another aspect of myself. Clearly, I'm feeling my usual subconscious anxiety of not achieving enough.

Honestly, I've been working towards all my short-term goals set in January. Some will take longer than others. I think that I have every reason to be optimistic about what I'll achieve this year.

In an unrelated dream, I had just fed Luke when another cat, a gray tabby, arrived, happy and purring. I recognized her as a cat I owned more than a decade ago, Squeaky. "I forgot that Squeaky was living with us," I said to my husband, The Gryphon. Sadly, in the waking world, Squeaky died by being run over by a car. Usually, when I dream about someone who's dead, I realize they're dead in the dream. This time, I didn't.

In the dream, Squeaky was young and healthy, her coat shining. It was like I'd been given another chance.

Moral:
I have a deep need to set things right.