This past weekend was my dad's birthday, so we invited him on a visit to celebrate. He arrived Friday night by dinner time, and I had made some barbecue chicken, quinoa, sautéed mushrooms and steamed vegetables. Then I had to do my evening work assignments. Dad watched some TV downstairs and socialized with The Gryphon once he came home.

The next day, we got up bright and early, got ready and headed into Center City on the high-speed rail, stopping at 30th Street and heading up to the main lobby area to meet up with Dad's girlfriend, The Adventurer, who was coming in on Amtrak. Her train was a little late, but we had no trouble connecting when we arrived, and we all took the next local train to Market East and the Pennsylvania Convention Center for the Philadelphia Auto Show. 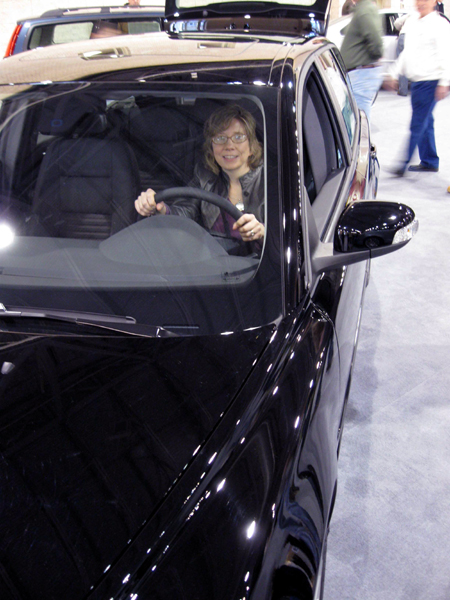 Me testing out a car
(Faster-loading version)

We visited the auto show with Dad a couple years ago and back then didn't quite know what to expect. This year, it seemed like there were fewer people, but it might have been because it was the first weekend, as well as being Super Bowl weekend. Or, of course, it could be an indication that fewer people are looking for cars. This meant we didn't have too much competition or too much waiting to look at the cars that interested us.

The cars that interested the four of us were quite different. The Gryphon and I were interested in practical cars, while Dad and The Adventurer loved the sports cars. Of all the cars that The Gryphon and I viewed that day, our favorite was the Honda Fit [SITE HAS SOUND], which had really good gas mileage, had a low base price, and offered a lot of interesting features. Plus, when we sat in the car, we liked how it felt and how it was laid out.

This year, we started by looking at the side rooms, which featured cars that have been modified or custom painted. The last time we visited, we waited until we were leaving to view them and encountered a lot of crowds. This time, we had no trouble. We saw a lot of outstanding, impressive work, including some custom motorcycles. 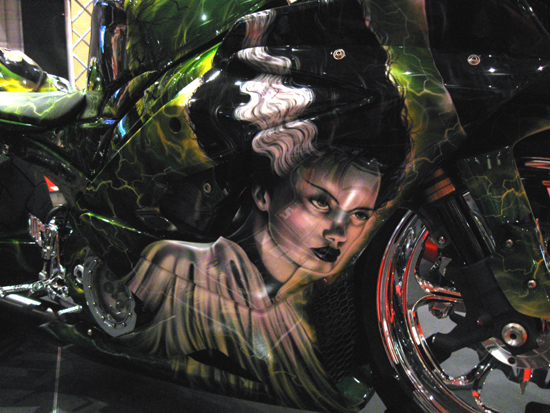 A motorcycle with a Bridge of Frankenstein motif
(Faster-loading version)

Next, we went to the Upper Level Ballroom, which had some of the more expensive cars, including Audi, Jaguar, Infiniti, Rolls Royce, Bentley, Maserati, Aston Martin and Lamborghini. Those were, of course, out of our price range but were fun to examine up close, and even in some case, to get behind the wheel. 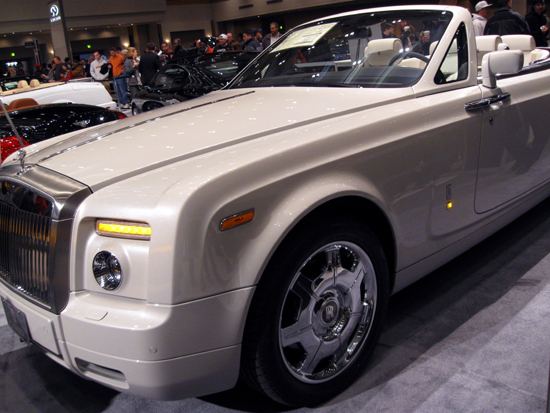 A very long Rolls Royce convertible with "suicide doors"
(The doors open the opposite way from normal.)
(Faster-loading version) 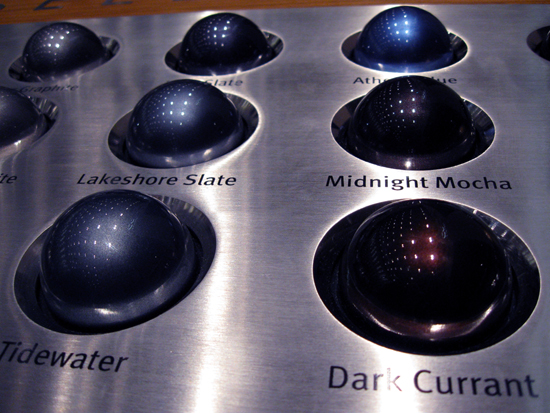 Paint selections for the one of the manufacturers
(Faster-loading version)

I found it interesting that, in this room particularly, people stood by whose main job was to polish the cars and wipe away the fingerprints after people had touched them.

Then we headed to the Grand Hall, which was the biggest display. We started in the right corner and viewed Volvos, Chevrolets, Hondas, Volkswagens, Acuras, Pontiacs, Hummers, and GMs. Then we were hungry for lunch, so we got stamps at the front gate and walked across the street to the Reading Terminal Market to get something to eat.

The Adventurer said she felt like a corn beef sandwich, so The Gryphon led us directly to Hershel's East Side Deli. I wasn't sure what to get but knew we'd be walking a lot so decided to splurge: I got potato latkes and a broccoli knish, both of which were delicious. If I had to choose, the potato latkes were better.

We looked around initially for tables in the terminal market, and finding none, The Gryphon suggested we cross the street and head down to the Gallery food court, where we easily found an empty table. It was also nice to get away from all the noise we'd heard, both in the auto show and in the terminal market.

Then we returned to the show, picking up where we left off and viewing Saturns, Saabs, Buicks, Cadillacs, Lincoln/Mercurys, Fords, Nissans, Dodges, BMWs, Subarus, Toyotas, Jeeps and Chryslers. Most of the time, we stayed together, but sometimes the two couples would split up, meeting up later. This worked fairly well except for one time when we got separated longer than expected, but eventually we located each other.

Here are some photographic highlights. 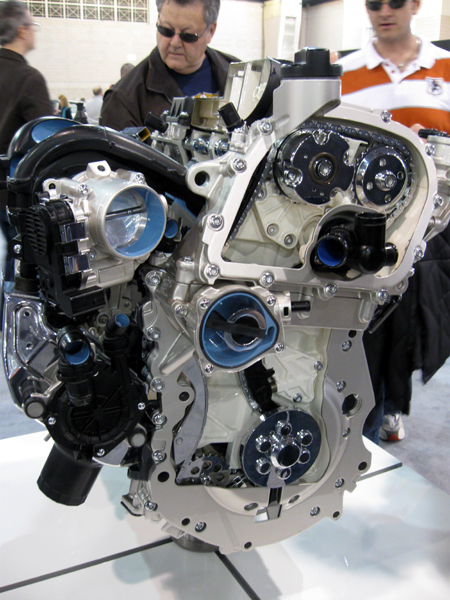 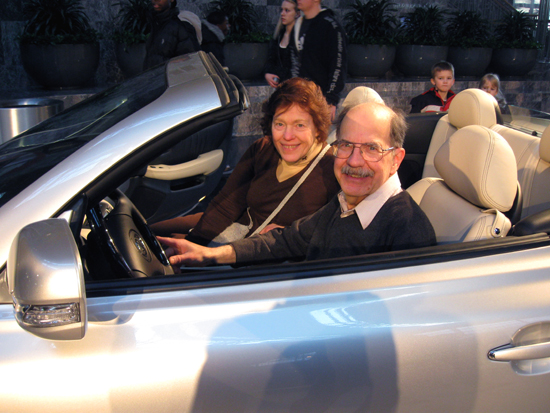 Dad and The Adventurer in a Lexus convertible
(Faster-loading version) 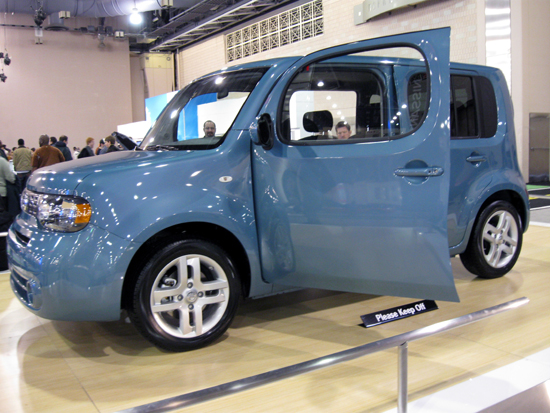 The Nissan Cube, one of the most interesting-looking cars
(Faster-loading version) 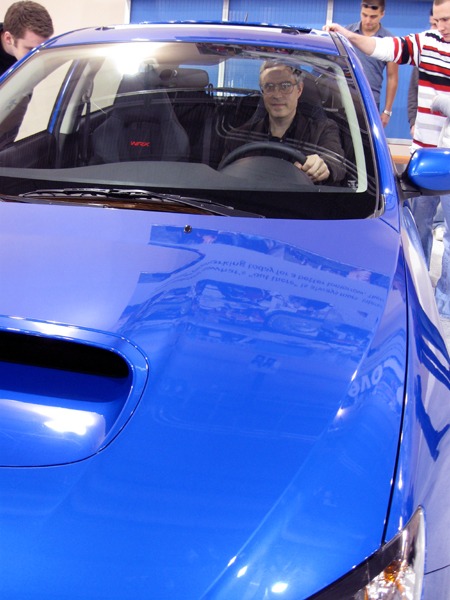 The Gryphon in the very popular Subaru WRX
(Faster-loading version) 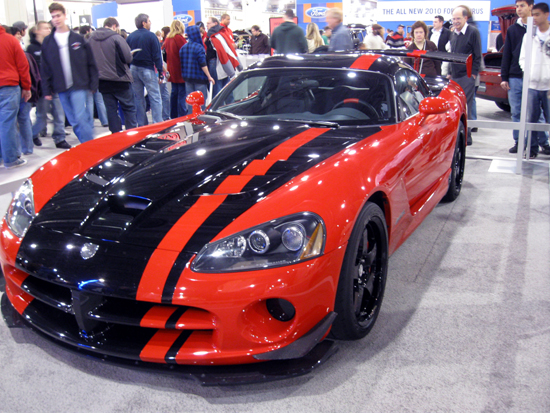 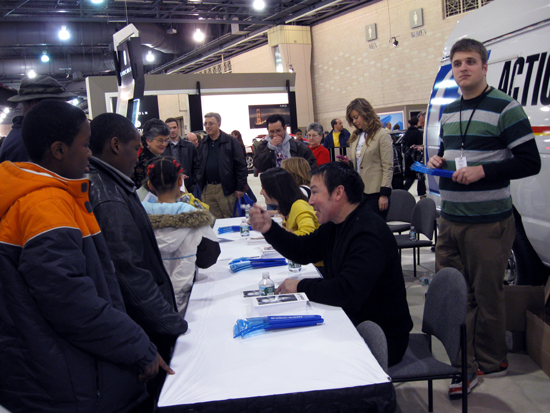 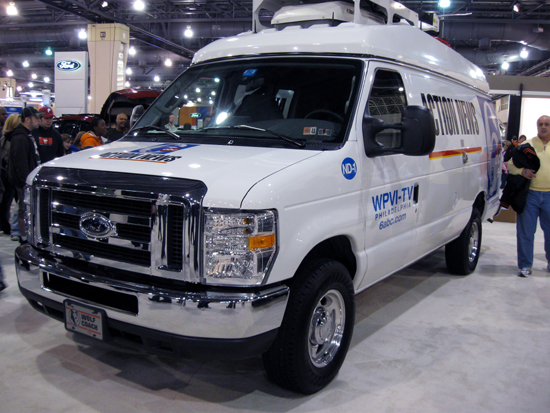 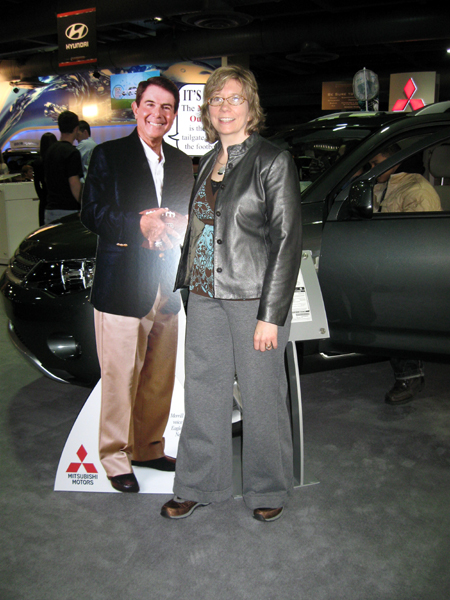 Before we left, there was one last room to view, Hall D on the Lower Level, which included Mitsubishi, Hyundai, Scion, Land Rover, Porsche, Lotus, smart, Suzuki, Mini, Kia and Mazda, as well as several special exhibits and vendors. We saw a sales person demonstrating Sham Wow and were impressed enough to buy some. Not only was the demonstration amazing, but I'm prefer to use reusable cloths.

Of course, then we had long rolled up Sham Wow tubes to carry the rest of the day. Fortunately, I already was using my reusable nylon bag, and they fit very well inside, sticking out the top but making them easier to carry.

One of the highlights in that room was a display from the Simeone Foundation Museum, which just opened last summer and displays the collection of Dr. Fred Simeone, who collects racing vehicles, tracing back to the earliest days of automobiles. We picked up some information about the museum and looked at the handful of cars from the museum that were on display. 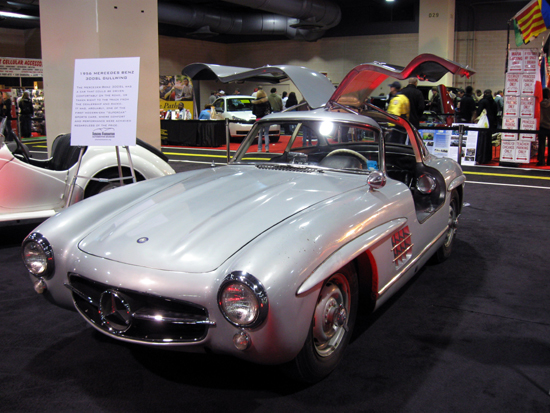 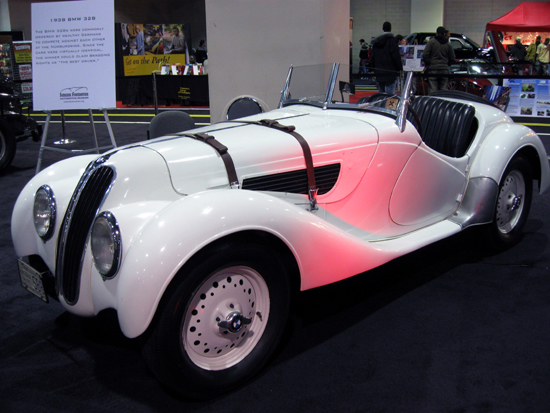 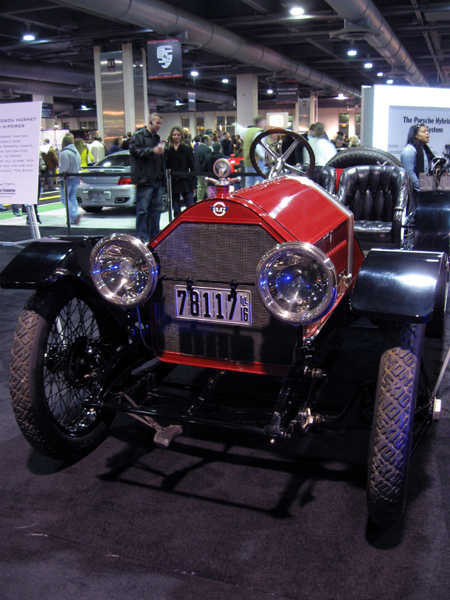 In a separate section were cars from the Buckingham Concours Exhibit, which were also unique classic cars. Next to it were some other classic and antique cars, in the Concours d'Elegance of the Eastern U.S. Exhibit. 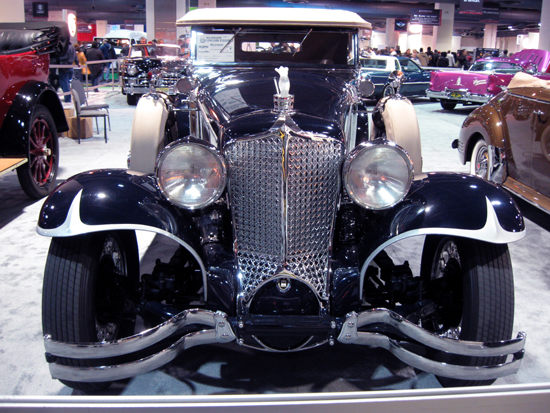 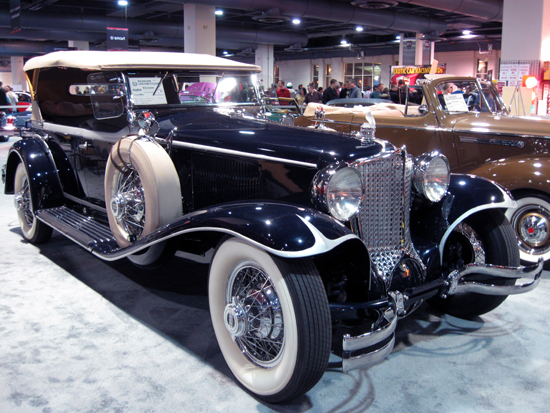 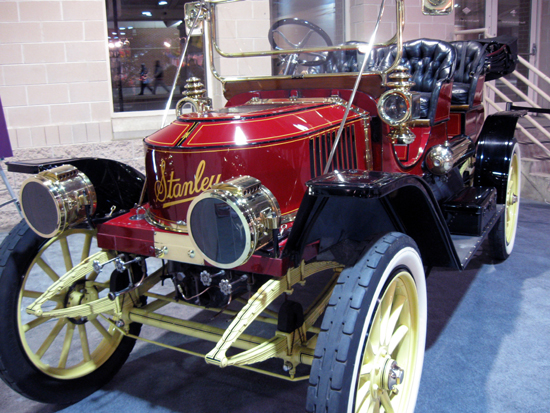 Another interesting classic car was the 1936 Jensen-Ford "Clark Gable" model, which was custom-designed for the actor, who loved flashy cars. The car on display was one of only two that were made. Gable had ordered a silver model, but when he arrived to pick it up, they also had a black one, which had been ordered by another customer. Immediately, the actor changed his mind and unsuccessfully tried to convince them to sell him the car. Finally, he posed for pictures with it, although he never owned it. I'm not sure if he ever claimed the silver car after that, either. 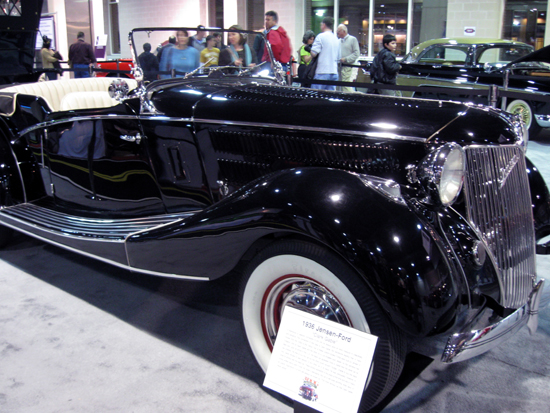 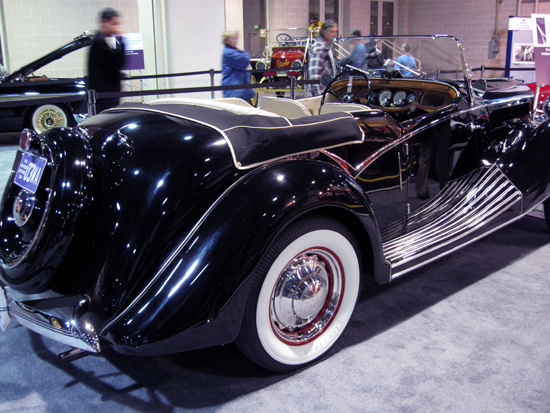 The Jensen-Ford "Clark Gable" from the rear
(Faster-loading version) 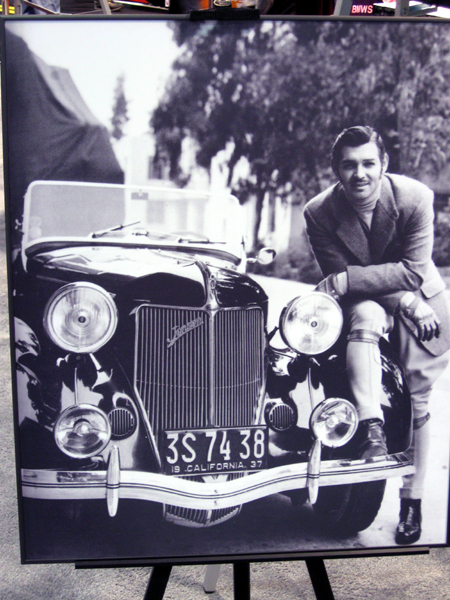 A couple interesting points about this. First, it's funny to think about a famous actor basically going up to a car and saying, 'Can I get a picture?" Almost like a fan asking for an autograph. The other interesting thing is that Jensen Motors, a small British firm run by Richard and Alan Jensen, generated enough interest through their association with Gable to get them a deal to do a run of Jensen-Fords with Jensen bodywork on a Ford chassis and kicked off their car company.

Another very interesting car, one of the last we saw that day, was the smart car. It's an environmentally-sound, lightweight two-seater with high gas mileage but very little storage. The Adventurer glanced at it and said she wouldn't feel safe in a car that small. It's also not practical for The Gryphon and I, especially when you consider that we often bring Una along with us when we travel. 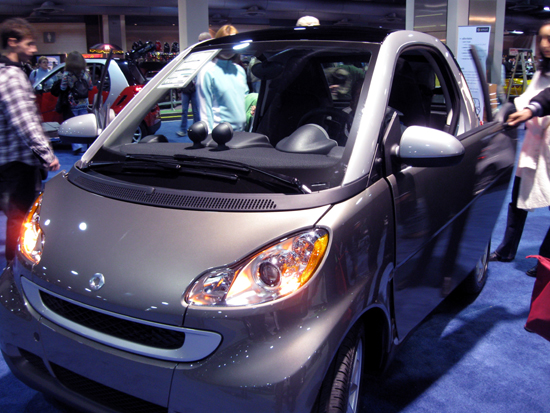 Once we'd seen everything, Dad and The Adventurer wanted to check out the vendors, but The Gryphon and I told them we'd wait near the exit in the Mazda section. We checked out a couple Mazdas, but they were the only car manufacturer we found that didn't have adequate information posted about the cars. Most of the manufacturers posted stickers on the car windows or on a nearby sign, giving the gas mileage, the base price plus the cost of the features on the model being shown, plus additional information about the environmental rating of the car and the special features. Many of the Mazdas had no information or just a standard vehicle sticker. I'm not sure why they were being displayed that way, but we joked that maybe they didn't want to actually sell any.

One of the first things we looked at when we viewed a car was the gas mileage. The second was the base price, and then the special features. Without that information, we weren't terribly interested in looking further at those cars.

While we waited we sat on the edge of the platform where their featured car was displayed. Again, strangely, they didn't have anyone giving a presentation about the car, like most of the other manufacturers did.

When we all met up, we collected our coats and The Adventurer looked at her train ticket so we could figure out a dinner plan. Her train left at 8:45, and it was about 6:30, so we decided to eat somewhere nearby. Fortunately, there are many restaurants near the convention center, which is a couple blocks from Chinatown. After a brief discussion, The Gryphon suggested a Thai place he'd heard about called Siam Cuisine, which was just a couple blocks away on Arch Street. We were seated immediately.

The service was fairly fast, although they brought out two of the entrees far in advance of the others. I had the Red Curry with Shrimp, and it was tasty. It's been a long time since I had a real Thai curry.

We made our way back to Market East Station and caught a train to 30th Street, where we helped The Adventurer figure out where her train would leave. Unfortunately, our high-speed train to the suburbs left before her train, but she understood that we couldn't wait the entire time.

On the way back, we talked about what were our favorite cars. I don't know, though, how many sales will come out of this year's sparsely attended show. Of course, those who did go will no doubt talk to their friends about what they saw. The relatively quiet auto show demonstrates we're in hard times.

At home, The Gryphon got on his laptop to check some things while Dad and I watched some shows I'd taped on our DVR (which we recently got from the cable company, since the digital converter box means we can no longer record shows on The Gryphon's old VCR while watching something else on TV).

Then we watched Saturday Night Live, setting it to record and waiting 10 minutes before starting. This allows you to forward and rewind as desired during the live program. Particularly useful when I'm watching SNL, because I always seem to drift off in the second half. Dad also fell asleep, then woke up and headed for the guest room. I rewound to what I'd missed and rewatched it.

We didn't make any plans or set any alarms for the next day, agreeing to play it by ear. As it turns out, we would go to the Simeone Foundation Museum to view many more cars. I will write about that later in the week, probably on Friday.

One more note: considering that I still need to look through the booklet and teach myself to use my camera effectively, I was very pleased with the pictures I took using the automatic settings. Whereas many of the pictures I took in similar conditions in the past were fuzzy, these turned out pretty good.

Moral:
The Auto Show is more fun when it's less crowded.