Last weekend, my dad visited to celebrate his birthday. I've already written about our experiences at the Philadelphia Auto Show.

On Sunday, Dad, The Gryphon and I decided to check out a new museum, the Simeone Foundation Museum, which is a collection of race cars acquired by Dr. Fred Simeone. The museum just opened last summer. 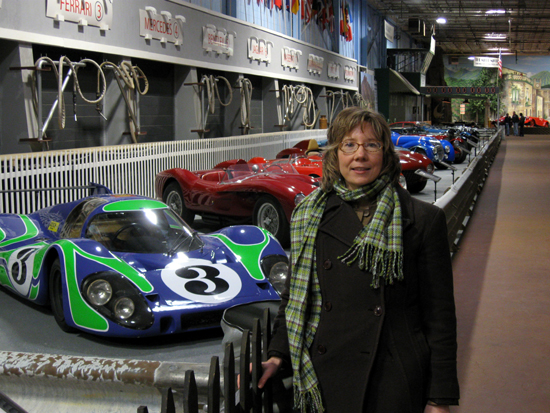 Me with some of the cars, including a
1970 Porsche 917 LH (blue and green)
(Faster-loading version)

First, we got breakfast at IHOP and then drove to the museum, which is located off I-95, near the Philadelphia Airport. It's on a very industrial road, but as we learned later from talking to the gift shop coordinator, the location offers enough space for car demonstrations during the warmer months.

Sunday was quiet, perhaps because it was Super Bowl Sunday, or because most car enthusiasts were at the Auto Show. We had the museum mostly to ourselves, although we saw a couple other visitors.

We caught a glimpse of Dr. Simeone. We weren't sure of it at the time, although I thought that he looked very much like somebody who might be important, just from the way he dressed and carried himself. Also, he walked up the stairs in one section of the exhibit to an upper area clearly reserved for staff.

The collection was really interesting, consisting of about 60 cars. The curators had done their research (although I'd imagine some of that knowledge came from Dr. Simeone, who no doubt knows a lot about the cars he acquired). Instead of being arranged chronologically, the museum was arranged by type of racing and racetrack. The initial section talked about the earliest types of racetracks, which were primarily dirt, and it showed the types of cars that raced on those tracks, along with some silent film footage of such a race.

Next we learned about another type of racing, where cars had to climb hills and deal with road obstacles. Then, we walked through displays about several international tracks. In a side room, sporty cars and the history of NASCAR racing was explored. Most of the rest of the cars illustrated some of the major international race tracks, such as Le Mans.

We were impressed with the collection, as well as with the condition of the cars, many of which seemed original. Here are some photographic highlights. 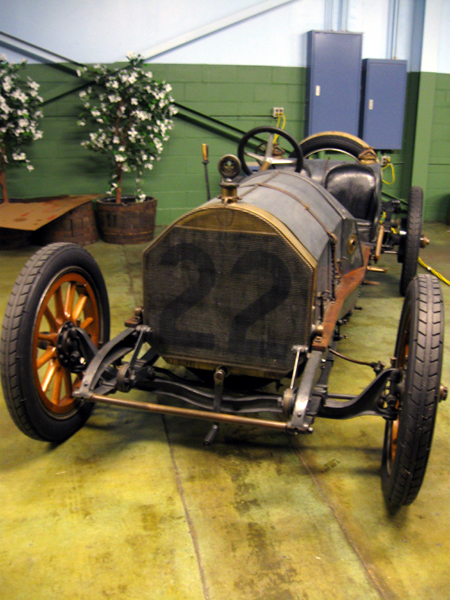 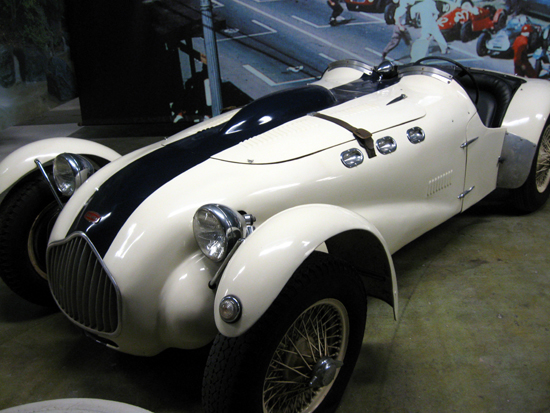 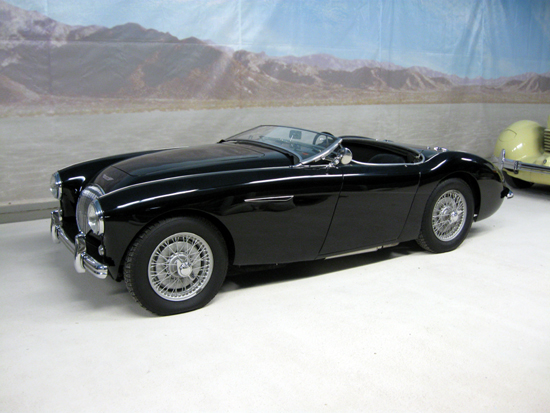 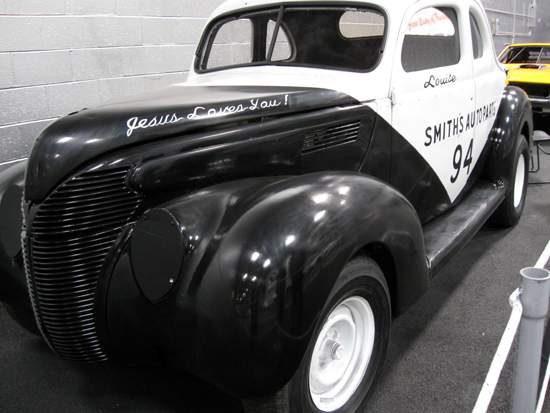 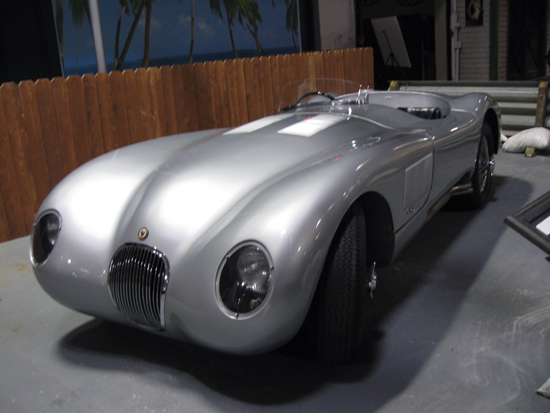 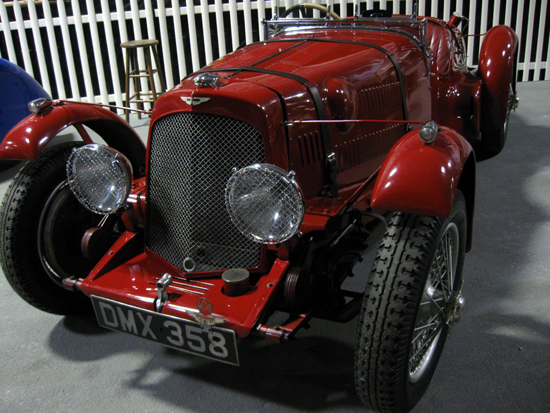 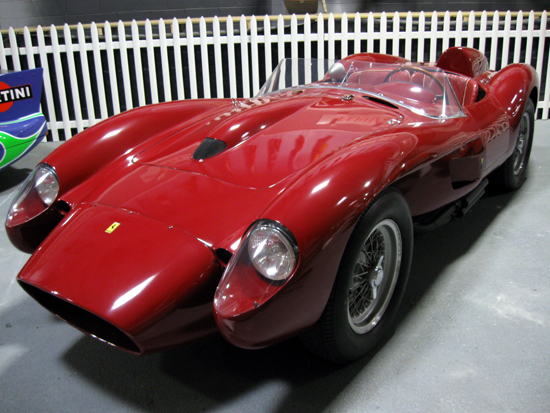 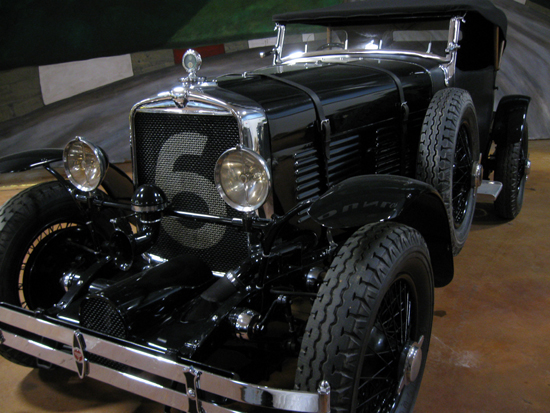 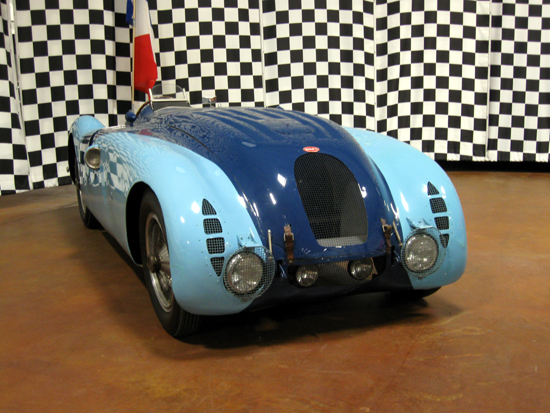 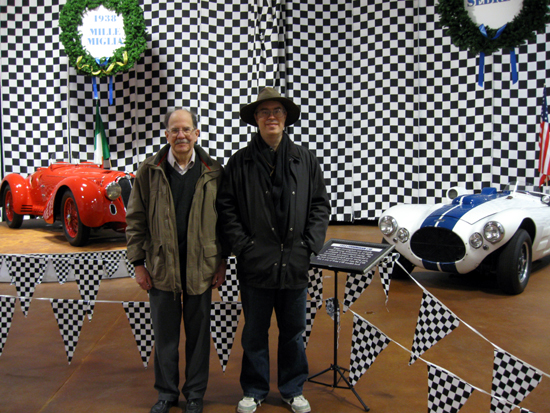 Dad and The Gryphon in the Winners' Circle
with (at left) a 1938 Alfa Romeo 2900B MM
and (at right) a 1952 Cunningham car, designed by Briggs Cunningham
(Faster-loading version)

At the close of our tour, we spoke to the gift shop coordinator, as we browsed the T-shirts, model cars, books and videos. He was knowledgeable about the collection. I asked him which of the cars were actually working, and he ran through a long list of the cars that were already in working order, and which cars had repairable problems. He told us they'll be demonstrating some of those cars on the track out back when it gets warmer. According to him, auto enthusiast and talk show host Jay Leno knows Dr. Simeone and has actually driven some of these cars.

To be honest, I don't know a lot about cars, but I'm always interested in history, especially cultural history. I'm fascinated by what it says about how we've changed over the generations. In history classes in school, most of the chapter would deal with political history and wars. A very small section at the end of the chapter summarized cultural and technological advancements. I always wished those sections were longer.

I also enjoy the aesthetics of classic cars, especially some of the antique cars that are vastly different from what we drive today. It's fun to see how things have changed, from vehicles that looked very close to horseless buggies to streamlined, modern vehicles.

Dad enjoyed the museum, as well, and I think The Gryphon did. He and Dad know much more about cars than I do and talked about some of the finer points of the information they read on the signs.

All in all, it took us about two to two and a half hours to get through the museum, because we were reading every sign and watching every video loop. That was another interesting aspect of the museum, the vintage film and video clips they showed describing the tracks being described, along with examples of similar cars to those on display. In the stock car room, there were oversized newspaper articles and ads about the cars.

The museum is worthwhile for any car enthusiast, especially as more activities become available.

It was about 2:30 by the time we headed back to our place. We'd had a long day the day before, and Dad didn't want to be on the road very late, so I heated up some leftovers for him. There would have been no way to go out to eat and return in time for him to get on the road at the time he wanted.

After Dad got on his way, The Gryphon and I also enjoyed some leftovers, and I got some work done on Wild Violet. Of course, I didn't get as much done as I would have liked, because I spent a lot of time going through all the photos I'd taken that weekend!

Moral:
The history of technology tells you a lot about people from different time periods.