Time with My Valentine

This weekend, of course, The Gryphon and I celebrated Valentine's Day, although I also spent a lot of time working on the new issue of Wild Violet. 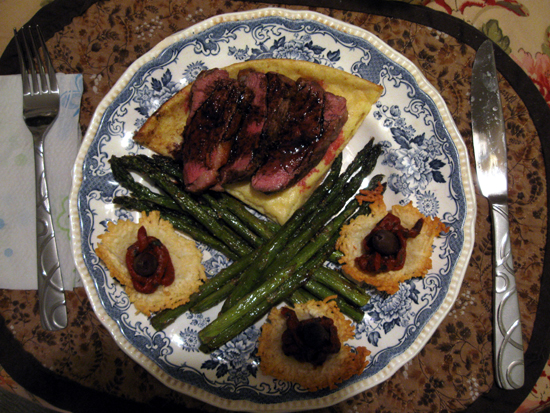 The dinner The Gryphon cooked me Sunday

On Saturday, we exchanged cards and gifts. The Gryphon bought me a number of products from Bath and Body Works, so that I can pamper myself.

The gift bag included a small bottle of really good hand lotion (for the dry skin I get during winter), and a tube of aromatherapy headache relief, which you're supposed to rub on your forehead if it gets tight. I hope it will be a good addition to my preventative arsenal.

I got The Gryphon the most romantic gift you can get a gamer: a gift card for EB Games. We haven't yet had a chance to redeem it, but he was happy to receive it.

In addition, I had a miniature rose plant and a large Hershey's kiss delivered to him at his office on Friday. Hopefully, the rose will continue to bloom and make his office more cheerful.

That evening, The Gryphon had made reservations for us at Bridget Foy's [SITE HAS MUSIC] on South Street. He had learned about their Valentine's Day special menu, which sounded great to us. Another consideration, of course, was that the place where we had originally wanted to go was completely booked by the time we made the reservations.

We were dressed up for the occasion. I wore a dress I'd bought last week at the Dress Barn: a great low-cut black-and-white patterned knee-length dress. It's got a fitted top and an A-line skirt, which is perfect on me. The Gryphon wore a dress shirt, his black pants, and his sports jacket.

Since we arrived early for our reservations, we sat at the bar and got black-and-tans while we waited. It didn't seem like it took very long: probably only about 15 minutes (which is how early we'd arrived).

Once seated, we looked at the menu. You got to choose an appetizer, an entree, a desert for two, and a cocktail. For appetizers, I ordered the roasted beet salad, while The Gryphon got the cheese plate, and we shared both. For an entree, I ordered the crab cakes, while The Gryphon ordered the Filet Mignon, both of which were cooked to perfection. For our cocktails, we each selected Love Potion No. 9, which consisted of vodka, cranberry juice and Chambord. It was a wonderful bright red color.

For our dessert, we shared a fondue platter, which was terrific. They brought out a little ceramic container of chocolate, which was kept warm over a little candle. Along with the chocolate, we received a rectangular plate with squares of pound cake, sliced strawberries, and squares of brownies. The Gryphon noted that there were five of each item, an odd number, which seemed strange since it was designed to share. We each had two of each and then split one. We joked that some relationships might not survive the fondue platter, if the couple can't decide who gets what.

On Sunday, The Gryphon had a special meal planned for us. In the morning, he made us buckwheat pancakes from a mix I picked up in the natural food store a couple weeks ago. They were delicious, and good for us, too.

I spent most of the afternoon working on Wild Violet as well as on some work for pay. Then The Gryphon made us dinner. He refined his recipe from the week before for a Yorkshire-style pudding, serving it with duck breast topped with a blood-orange gastrique, along with asparagus and parmesan fricos with tomato and olives. The meal was served with a bottle of Proprietor's Red from Chaddsford Winery, a good local winery.

For dessert, we each had a red velvet cupcake he'd brought home from his office Valentine's Day celebration.

About an hour and a half later, we drove to the movie theater to see Coraline, which had been highly recommended by a fellow Otakon staffer, The Godfather. I can see why he liked it. For one, it's stop-motion animation, which is almost a lost art. It's nice to see a full-length feature using that technique. I should note that we saw the 2-D version, which I loved, but I'm eager to see the 3-D version while it's still in the theaters.

Secondly, it's a classic girl adventure tale, in this case based on a novella by Neil Gaiman. In it, Coraline finds a secret passage into a fantasy world, where she encounters both amazing delights and terrifying dangers.

(WARNING: Possible spoilers below. If you don't want to know anything about the plot of Coraline, don't read further.)

As we were driving home afterwards, I thought about the similarities between Coraline and two other girl adventure stories: Alice in Wonderland and The Wizard of Oz.

In all three, the girls enter a fantasy world through a secret passage. For Alice, it's a rabbit hole. For Dorothy, it's a tornado (which is sort of like a moving tunnel). For Coraline, it's a miniature door in her old house. I find this very interesting, because going through a tunnel also represents the beginning of a shamanic journey, which then opens an expanded vision for the shaman, leading to spiritual insights.

All three enter a dreamlike world, where the rules are different, but which all contain hints of the "waking world" lives they left behind. For example, they might meet someone who looks or acts like someone they knew in the waking world. In Coraline's case, she meets slightly altered versions of her neighbors, as well as her "Other Mother," who looks just like her real mother, except that she has button eyes. Unlike her real mother, her Other Mother has the time to garden and cook Coraline delicious dinners.

The three girls also have totem animals who help them on their journeys, which is another shamanic device. Dorothy has her little dog, Toto. Coraline befriends a stray black cat. Alice has at least two: the White Rabbit, who leads her into Wonderland, and The Cheshire Cat, who seems to be based on her waking-world cat. He pops up periodically and gives her advice.

Another interesting connection between the three stories is that all the girls fight off a nemesis who is a deadly, threatening woman. Dorothy must defeat the Wicked Witch of the East, who will stop at nothing to get her ruby slippers back, the same magical objects which are the key to Dorothy returning home. Alice faces off against the Queen of Hearts, who wants to put everyone on trial and then cut off their heads. Coraline must find a way to defeat La Belle Dame, but I won't say any further, so as not to spoil too many surprises.

All of these girls succeed, ultimately discover that the way to succeed is to face their fears and stand up for themselves. When you think about it, then, their shamanic journeys all bring them similar lessons. As they move through the fantasy world, filled with childlike wonder, they must face very scary realities, many of which are initially confusing. These girls don't know who they can trust and have to find their own ways of assessing people.

All of these girls are prepubescent (about 8 to 10), but are no doubt aware that their lives will very soon be changing drastically. In all cases, the nemesis figures represent their deepest fears of growing up: whether it is saying good-bye to the wonders and imagination of childhood (Coraline), being subject to unfair and capricious societal rules (Alice) or being isolated and lonely (Dorothy). By facing down those fears, they gain the tools they will need as they grow up.

I find it interesting that all three of these tales were written by men (Alice in Wonderland by Lewis Carroll, The Wizard of Oz by Frank L. Baum, and Coraline by Neil Gaiman). I don't know if girl adventure tales written by women tend to be different. Would the girls face different challenges? Battle a different sort of nemesis? I'd love to hear thoughts on that, should anyone like to share.

Coraline is a well-crafted film that evokes the sometimes exciting, sometimes terrifying days of childhood. I think that, like Alice in Wonderland and The Wizard of Oz, it is destined to become a classic.

Moral:
Nothing says love like a home-cooked special meal.