I often find loose playing cards while walking my dog. How they end up, stranded on sidewalks, is a mystery. But since they are so common, I usually let them lie. I have, however, found some more unique playing cards from other games.

The first three were found on separate days near a church, and they appear to be biblical trading cards. Perhaps the children got them as a bonus for attending Sunday school, or as a reward for being particularly well-behaved or singing a hymn really well. Each of the cards features a cartoon image of a biblical figure, along with a kid-friendly bio.

Jonah has the best picture: a comical depiction of him being coughed up onto the beach by a very adorable whale. His bio reads: "God told Jonah to go to Nineveh to preach about God, but Jonah did not want to go to Nineveh! Instead, Jonah decided to board a ship going in another direction God sent a storm, and the ship's sailors threw Jonah overboard. Then God sent a great fish to swallow Jonah. For three days and three nights Jonah prayed. God heard Jonah's prayers. When the great fish spit Jonah onto land, Jonah obeyed God and went to Nineveh. The people listened to Jonah and were sorry for doing bad things."

Clearly, this bio was aimed at children, who could learn from this card that it's important to follow through on commitments, to pray, and not to do bad things. 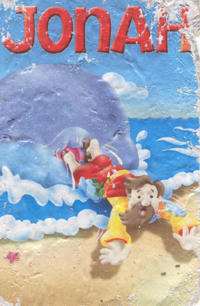 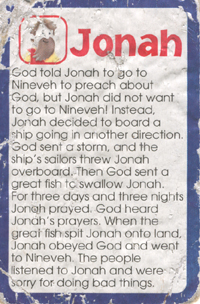 Modern readers note: this is only a fraction of the time spent on Boston's Big Dig, and the resuilts were considerably better. I want to know, though, how does one become the cup bearer for the King? Did he also have a spoon-bearer, a plate-bearer and a napkin bearer? 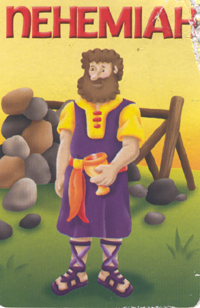 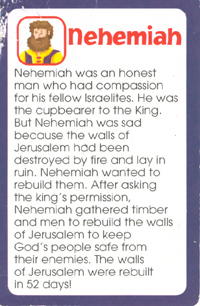 The final biblical trading card features John the Baptist. In his picture, he's got his arms held out at his sides and a broad grin on his face, as if he's a stand-up comedian, telling jokes in a cheesy hotel. His bio reads: "John the Baptist, son of Elizabeth and Zechariah, was Jesus' cousin. John wore clothes made of camel's hair and ate locuts and honey in the desrt. John's purpose was to tell people about Jesus. People came from all over to be baptized by him. Even Jesus came from Galilee to the Jordan River to be baptized by John! As soon as Jesus was baptized, the Holy Spirit descended upon him like a dove." 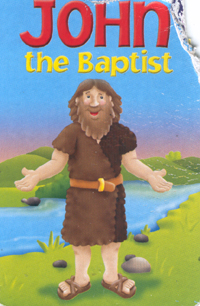 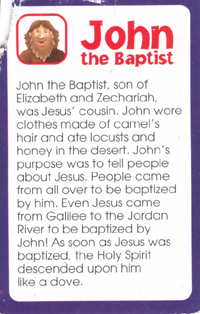 The next found item appears to be a game piece for a children's game. It's a cartoon seahorse on a yellow square. I don't know what this game is, but I want to play it!

Another card clearly came from a trivia game. It has the title "People" across the top and reads: "Question - Which rhythm and blues singer was shot and killed by his father in April, 1984? Answer- MARVIN GAYE."

Of course, I don't know the age group intended for this game, but very few of today's young people would know anything about a singer who was popular in the '60s and '70s. Who knows? Maybe it's a game that's intended to build cultural literacy. Either that or to make sure the parents can trounce the kids every time they play. 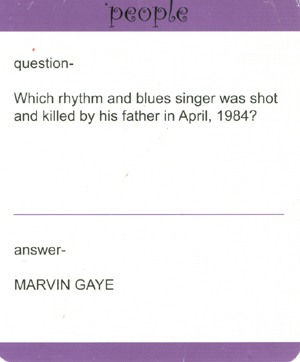 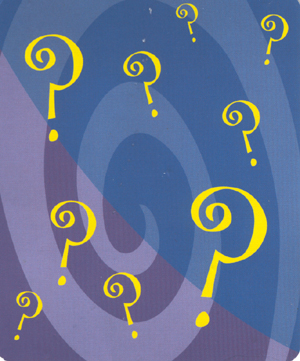 The last card is my favorite, because it is so delightfully weird. This comes from a game designed to teach kids about nutrition. It features a cartoon image of a dinosaur wearing a baseball uniform and munching on a head of cabbage. Underneath, we see that he's named "Cabbagesaurus." Above his head, it reads: "The Leafy Greens Council is proud to introduce the Cruciferous Crusaders All-Star Cancer Fighting Team."

On the back, we learn about his "Vital Statistics": "Team Captain - Oldest member of the team. Strength is in high mineral and vitamin content." Below that is a word find where kids are asked to find 11 secret words: "broccoli, cabbage, calcium, kale, carotene, fiber, iron, vitamins, lettuce, protein and spinach." 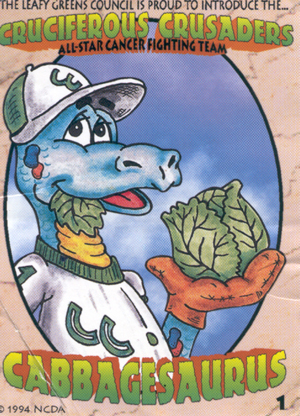 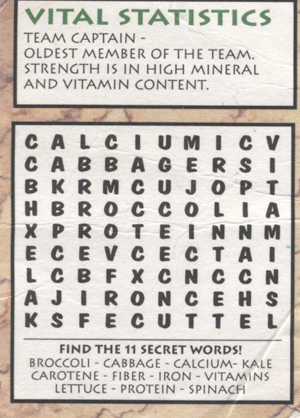 I just love this. It's actually goofy enough that kids might find it interesting. If you liked this as much as I do, go to the Leafy Greens Council site and learn more about the Cruciferous Crusaders. I simply have to have a Kale-o-Don card, as well as a Spinachraptor and a Lettuceratops.

Moral:
Games are a fun way to learn.