This weekend, my husband, The Gryphon, and I visited my sister and her husband in Northern Virginia. This was our first visit to their new place since they moved to the state about six months ago.

As we were driving down, I could tell exactly why they'd chosen to move to Virginia. Many of the landscapes reminded me of Central Pennsylvania, with the low, rolling green valleys and shallow, rocky rivers. To her, it must feel like coming home.

With The Gryphon as my navigator, we found the place easily on a quiet, residential street. The place they're renting was one of the smallest homes on the block but has a large, fenced-in yard. I think it's the nicest place they've shared, partially because the usable space is arranged more conveniently.

My sister had told us to call when we got close, and she must have been standing in the front entranceway, watching for us, because she dashed out as soon as we pulled in. It was so good to see her in person; we've been communicating over e-mail and phone, but it's not the same. 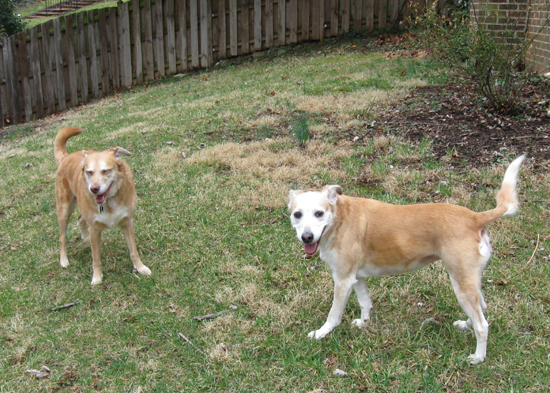 Una and Emma are happy to hang out together
in my sister's back yard.
(Faster-loading version)

We took Una through the house and immediately let her outside with her sister, Emma. She was initially confused about being allowed outside without a leash and wouldn't leave the deck until we walked into the yard with her. We hoped the dogs would run and play, but these nine-year-old puppies no longer have the same energy. Instead, they walked around the borders of the yard, sniffing things and eating grass.

My sister gave us a tour of the house. It's a split level. Upstairs is a living room area, dining room area, and a decent-sized kitchen, along with three small bedrooms and a small bathroom. They're using one bedroom as an office, one as storage and one as the guest room. Downstairs is a somewhat larger living area with a fireplace, as well as the master bedroom and a large bathroom with a large, luxurious tub. 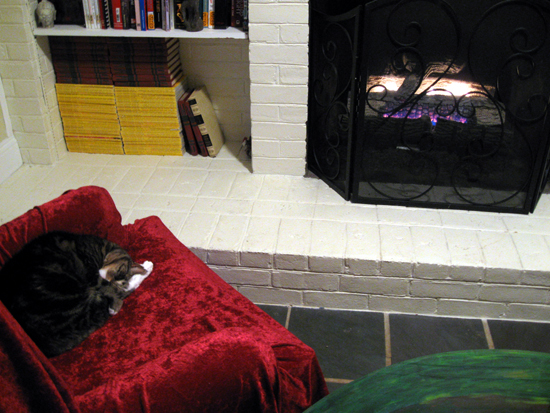 Beanie, short for Bonanza Jellybean, relaxes in front of the fire.
(Faster-loading version) 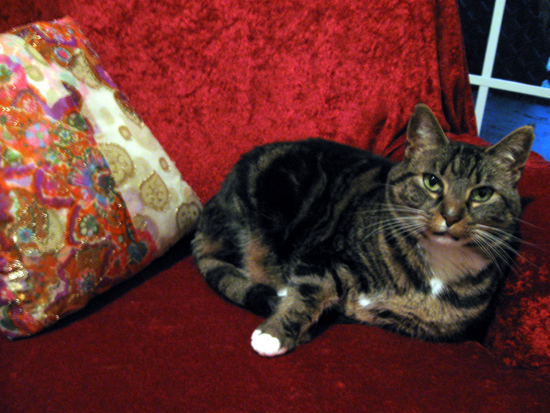 Beanie, also known as the world's most attractive cat,
reclines on a velvet-covered chair. Of course.
(Faster-loading version)

After we got our stuff brought in, my sister and her husband wanted to show us downtown Winchester, so we hopped in their car. We stopped first at their fantastic public library, the Handley Regional Library, which is absolutely gorgeous. 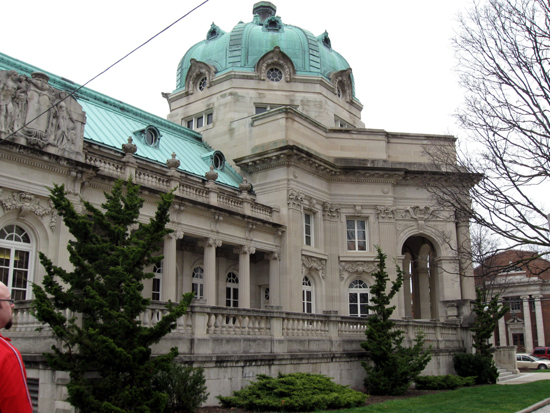 This fantastic building is the public library in Winchester, Virginia.
You can see my sister's husband in the bottom left of the picture.
(Faster-loading version) 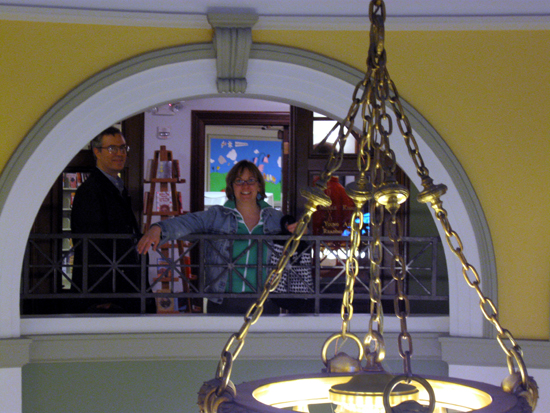 My husband, The Gryphon, and my sister across
the open area of the balcony on the second floor
of the Handley Regional Library in Winchester, Virginia.
(Faster-loading version)

The downtown appeared to be thriving, with a mix of different types of stores. It reminded us of what Central Pennsylvania used to be like 25 years ago, before the malls came along and killed off all the mom-and-pop stores. My sister tells me the only mall in that area is small and not terribly exciting. So either the downtown didn't face serious competition, or the communities found other ways to keep businesses open.

We walked down an open mall, where stores lined either side of a brick walkway. Along it were some stores that seemed more modern, while other seemed to be older, with vintage signs. I took photos of some of the things that caught my interest during our tour. 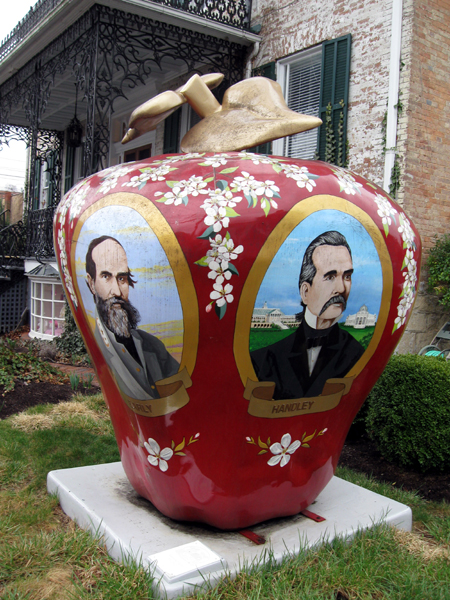 All over the town of Winchester were apples that had been painted
in preparation for the upcoming Apple Blossom Festival.
This one features portraits of historical figures.
(Faster-loading version) 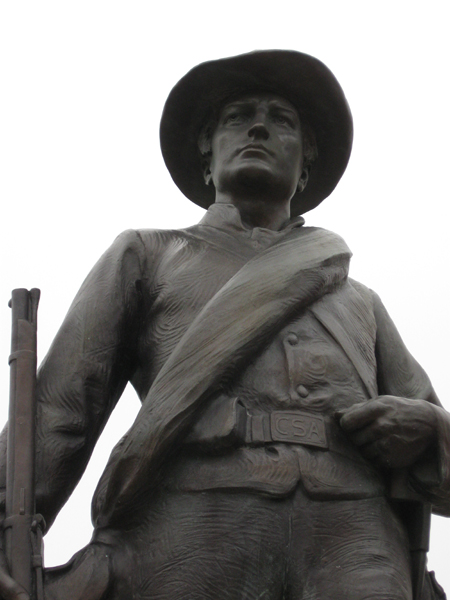 A close-up of the memorial to Confederate soldiers
that stands in front of the Frederick County Courthouse.
(Faster-loading version) 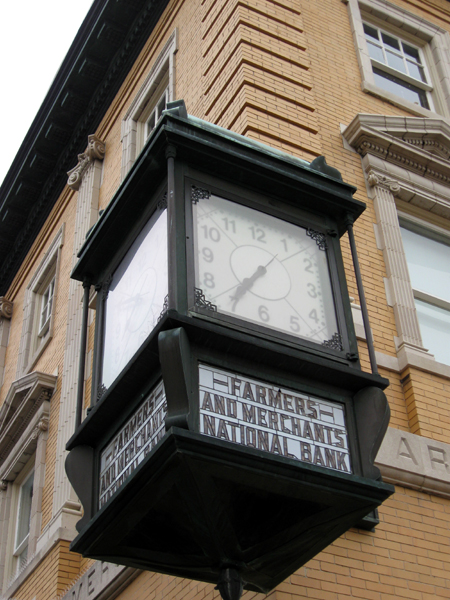 I loved this fantastic clock for a now defunct bank.
The letters are in stained glass, and the clock still works.
(Faster-loading version) 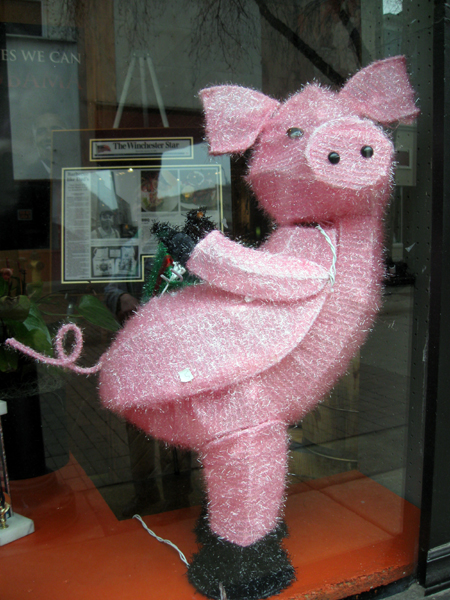 This odd, beatle-shaped pig was in the front window of a barbecue shop.
We thought that he looked like he was gesturing to himself
and saying, "You can have all. Of. This."
(Faster-loading version)

We stopped, then, at the grocery store, to pick up some items for a potluck my sister was having in celebration of her birthday. She had invited some coworkers to join us. My sister's husband picked up ingredients for a jambalaya, and The Gryphon, on my urging, got some tomatillos, then picked up some potatoes, a pablano pepper and manchego cheese to complete the dish.

The store sold choose-your-own six-packs, where you could fill a cardboard sleeve with six bottles of your choice. Of course, I couldn't resist. One of the beers I chose was a light beer with a raspberry flavor, which I would later enjoy.

Back home, the men cooked while I helped my sister find an outfit. Una relaxed, seemingly happy to have us home. 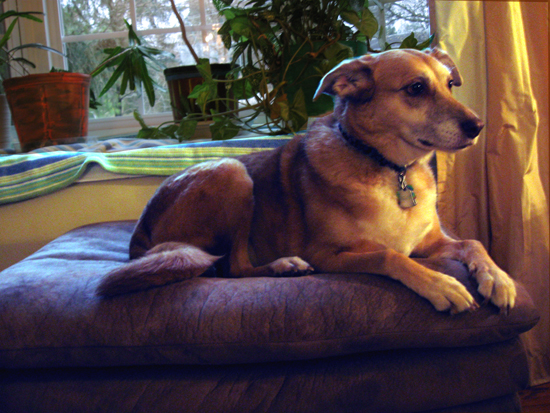 Una seemed to think the ottoman was a dog bed.
(Faster-loading version)

I helped my sister make sure everything was ready to receive the guests, including putting Melinda Doolittle's new album on the stereo and lighting some candles. Then, because she wanted to get a picture to show off her new haircut, I took some portraits of her. 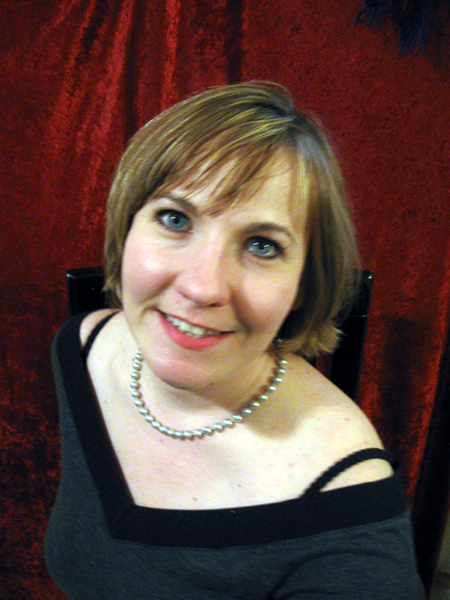 A portrait of my sister, who just got a new haircut.
(Faster-loading version) 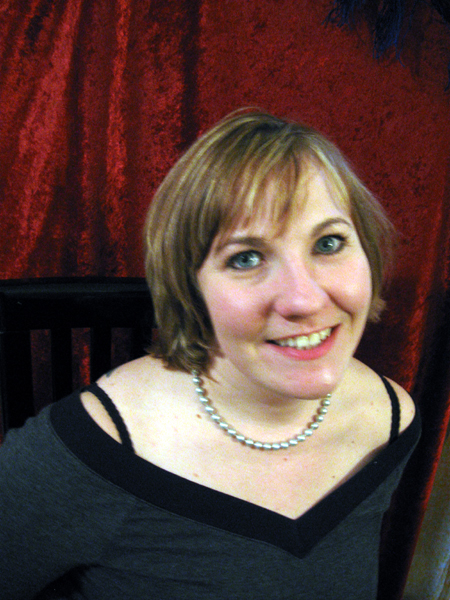 Another shot of my sister
(Faster-loading version)

Soon, the guests began arriving, bringing food and gifts. While we waited for more people to arrive, we got involved in conversations about the pets. Everyone seemed to take a liking to them, making the rounds petting my sister's cat, Ludo (who I somehow didn't remember to photograph this trip), and the two dogs. 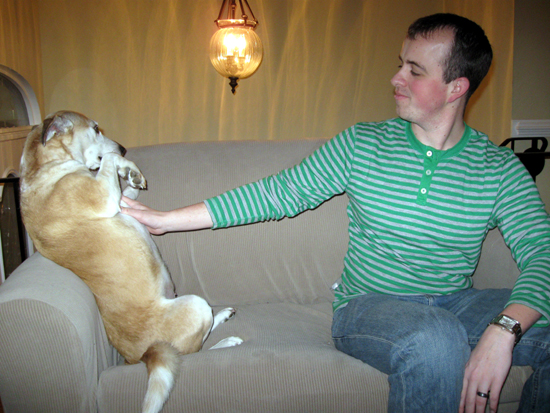 Emma convinces a dinner guest to give her a sitting-up belly rub.
Because that's how she rolls.
(Faster-loading version)

When we had a good group, my sister handed out plates, and we all took some of the goodies. In addition to the jambalaya and the tomatillo hash, there was KFC fried chicken and sides, some cooked pork, and some grocery store cake rolls. I think that my sister's coworkers aren't much for cooking!

I didn't realize that her boss was there until later in the evening when someone called her by name. She was so relaxed and down-to-earth that she seemed like just another coworker, dressed in a sweatshirt and track pants.

The conversation got entertaining when everyone started swapping driving stories. One of my favorites was about somebody's friend, who puts on sunglasses, slumps back in his seat, and pretends to be sleeping until people beep at him! (Do not try this at home.)

As soon as the boss announced she was leaving, nearly everyone else did, too. One woman, my sister's best friend at work, stayed behind along with her boyfriend. He had brought the game Cranium, and even though my sister had planned to go to see a band, we figured we could get in a game first.

We played as couples, and I was pleased that The Gryphon and I did better than the first time we played. Back then, we hadn't been dating very long and didn't work well as a team. This time, we came in second place, and we had some great successes, such as when I managed to make him guess the word "lumberjack" by moving his hands into the shape of an axe and having him chop the wall. He also guessed both "bunny slope" and the movie title Snakes on a Plane from my terrible drawings, which I had to do with my eyes closed. Everyone was amazed, including me!

My sister and her husband won. I think there's an unwritten rule that the host always wins. We still wanted to see the band, but The Gryphon was tired and wanted to stay home with the dogs. This was probably for the best, because Una had been whining for attention for about half an hour.

We got a ride from the other couple, who were heading home, and they dropped us at Sweet Caroline's [SITE HAS SOUND]. First, he had to move a bunch of stuff out of the back seat, since he's a medical courier. This included a cooler, but he assured us there was currently nothing in it.

When we arrived, the place was already packed. After paying our cover charge, we were greeted by a woman with a large tub full of ice and beers. You could buy one from her right there or go to the bar for special drinks. There was a coat rack directly behind her, where my sister and I left our coats (the woman warned us not to leave a leather coat there, but both of ours were unlikely to appeal to thieves).

A DJ was on-stage playing music. Turns out he was actually a member of the band, and he was taking pictures of the audience, saying, "Who wants to be on the Web site?" So far, though, I haven't spotted anything on their site.

People were already way drunk. It's always weird to show up somewhere that people have been drinking much longer than you. They were stumbling around, crashing into us as we tried to dance. My sister could see I was irritated and asked me, "Haven't you ever danced in a crowded bar?"

By the time the band started, I gotten used to it and decided to just enjoy myself. The band is called The Souled Out Band, and we expected them to do more soul. They did start out with some classic tunes we recognized, but then they got into other covers on different themes, such as the rock block, fronted by a young guy who normally does their sound, apparently.

Then they segued into a Southern rock/country set. It was very stream-of-consciousness, starting with "Sweet Home Alabama" and then that Kid Rock song that samples it (at which point everyone stopped singing along). Then they played another song that has the lyrics "sweet home" in it, then into a snippet of "The Devil Went Down to Georgia," but cut it off before the chorus, much to my irritation. They went from that into some really country stuff, such as "Cotton-Eyed Joe." They completely cleared the dance floor by announcing, just before that song, "All right. This one's for all the hillbillies!"

An elderly woman pushed through and did a hoe-town with some younger dancers, but many of the younger people left the floor. Then the band slowed it down for a few songs, and while my sister and her husband slow-danced, I joined a long line of single ladies at the restroom.

I joked around with the woman behind me, who was in her 20's. We started singing along with to the band with our own lyrics, all about our situation of waiting in line for the bathroom. It was a great moment. 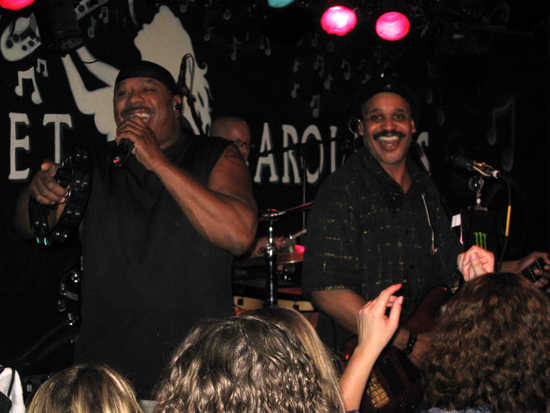 Bev Williams and Lydell Patterson of The Souled Out Band
perform some soul classics.
(Faster-loading version) 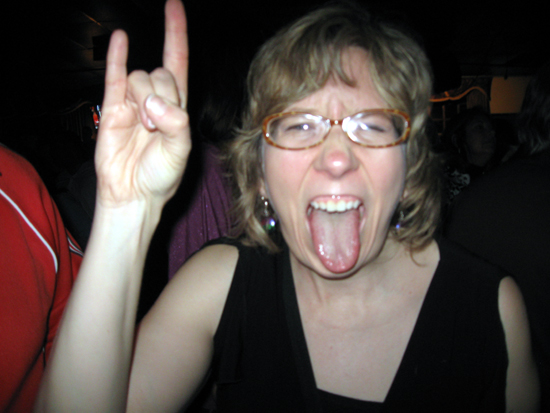 Me rocking out during the rock set. Oh, yes. I'm so bad ass.
(Faster-loading version) 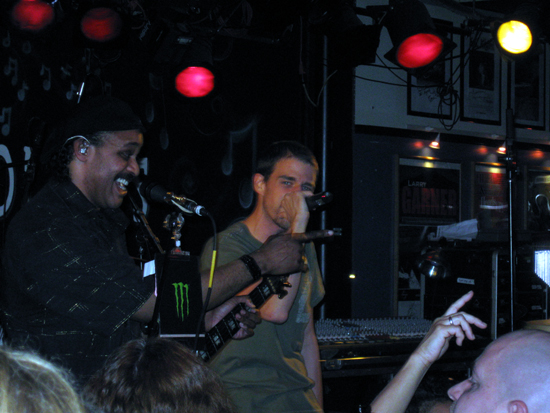 Lydell Patterson and Matt Liscio of the Souled Out Band
perform a rock set.
(Faster-loading version)

After the slow songs, my sister and her husband found me and said they were ready to head home, so we walked back to their place. The Gryphon was watching TV downstairs, and we joined him until we all started nodding off.

Moral:
Just because a band has the word "Soul" in their name doesn't make them a soul band.