On Sunday, none of us slept in terribly late, because we knew we had a short amount of time before my husband, The Gryphon, and I would need to get on the road for our long journey home. 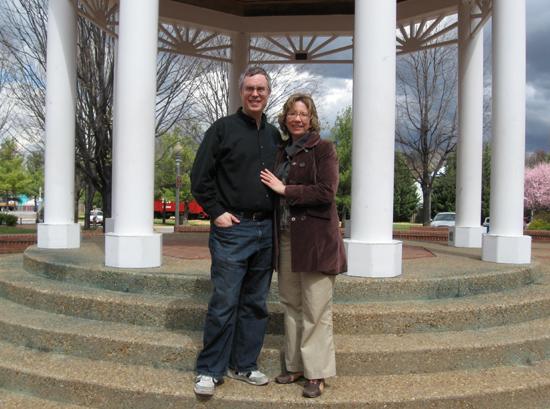 The Gryphon and me in front of a gazebo in Port Royal.
(Faster-loading version)

My sister let me take a bath in the luxurious large bathtub in the master suite. She turned a radio on for me, but the station slipped into static, so I lost track of time. Una fell asleep on the bathroom floor. When I finally made my way upstairs, I heard, "Oh, good. Now we can have breakfast."

Breakfast was a creation of my sister and her husband. You take a toasted bagel (in my case a whole-grain bagel), spread some cream cheese on it (in my case, fat free), add a slice of tomato, some lox, and complete it with a fried egg. The sandwich is very filling and has some vegetables, protein and fiber (if you use a multi-grain bagel). What's better: it adds up to a lighter meal than more you would get in a restaurant.

We did discover that you should fry the eggs hard, because otherwise the yolk squirts out all over your nice tablecloth.

After we'd had breakfast, we talked about what to do. My sister suggested several options. One was to take the dogs for a long walk around Winchester and see more of the town. Another was to find out if any nearby museums or historical sites were open. Winchester has a connection to George Washington. He lived there as a youth and actually surveyed the town. There are several little memorials and historical sites dedicated to him.

Instead, we opted for the third choice, which was to visit another town, so we drove to Port Royal. It promised some shopping and historic buildings, and it's also the county seat of Warren County.

We took the scenic route, which is to say that my sister's husband turned on the GPS but then continued to ignore the instructions. It kept trying to send him on a highway, and we wanted to see the countryside. The poor GPS kept saying, "Recalculating... recalculating..." Eventually, he just turned it off.

The day was sunny and a little warmer, even feeling a bit like spring. When we parked in a little parking lot, I was happy that The Gryphon had suggested I bring my spring coat. My sister saw a sign in the parking lot, announcing that the limit on parking was four hours. "Oh, no! We better hurry!" she joked.

We strolled down the main street, which was lined with flowering trees. I'm not sure what they were, but they were beautiful. 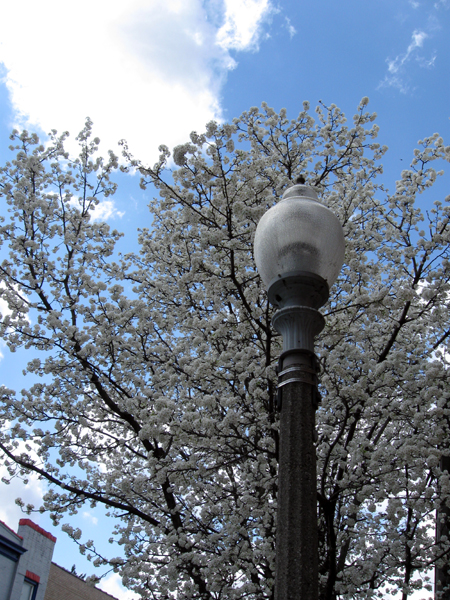 A lamp post against a flowering tree in Port Royal, Virginia.
(Faster-loading version) 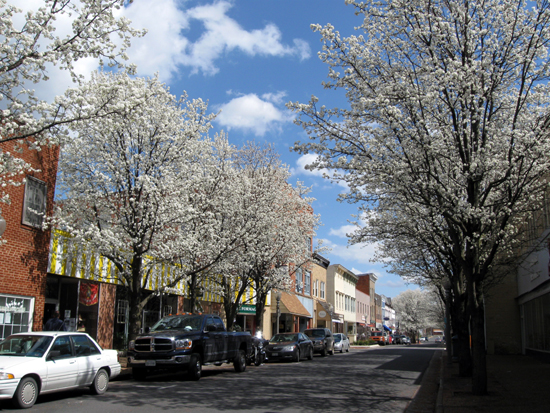 While the stores we saw in Winchester seemed to be either practical or hobby-oriented, plus a few gift stores, this town seemed more touristy. A lot of the stores sold antiques or decorative items and gifts.

We went inside one vintage store because the clothes in the window caught our eye. My sister, her husband and I browsed the clothing. Her husband tried on a blue '80s windbreaker with rainbow trim which we agreed was not a good look. My sister would have tried on a polka-dot dress but the price was too steep. This store was operating as a boutique, offering nicer items, and pricing to match.

I did, however, find a great necklace. It's vintage from the '60s or '70s. The necklace has plastic beads in autumn colors with dangling ovals between them that remind me of leaves. I think it could be really amazing with the right outfit. Here's a picture I took this morning. Please excuse the hair (bad hair day). 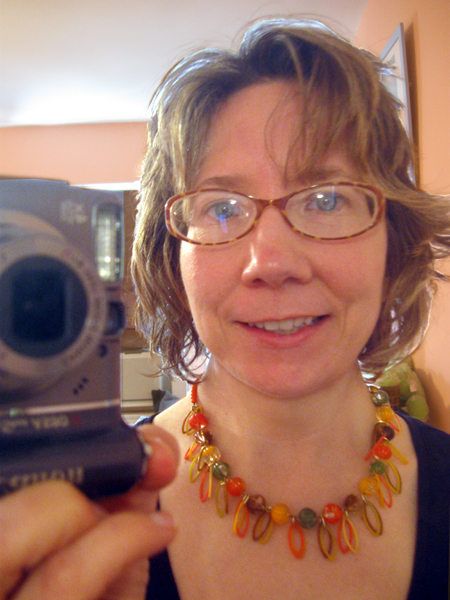 We thought of going inside one shop that was offering free beer tastings, but The Gryphon didn't want to do that on an empty stomach. Of course, none of us realized it was getting towards lunch time until he said that. My sister continued we walk to the end of the block and then swing back by the coffee shop for something light. 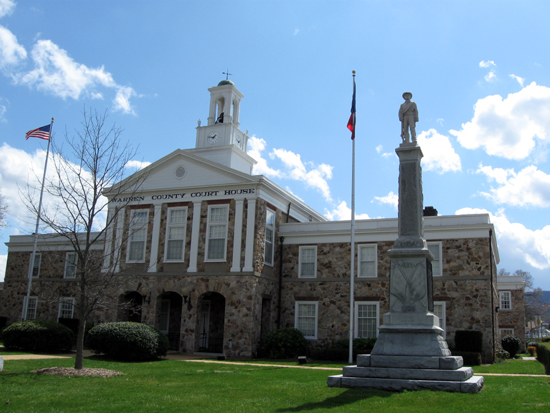 The courthouse for Warren County, Virginia.
The statue in the front right corner is in honor of Confederate soldiers.
(Faster-loading version) 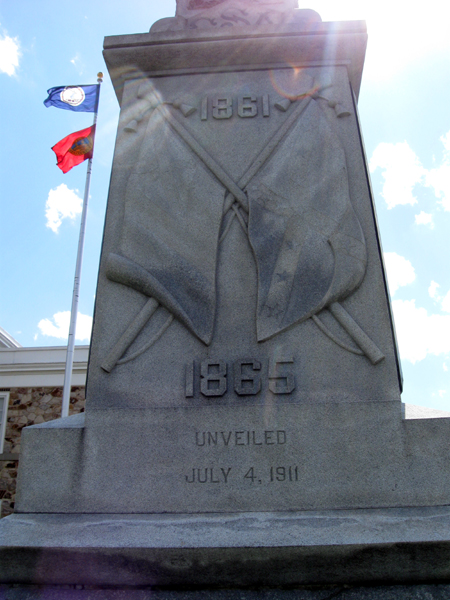 This monument in front of the Warren County Courthouse
is in honor of Confederate soldiers. Here you can see
the crossed flags of the two opposing armies.
(Faster-loading version)

On our way back to the coffee shop, we passed an electronics store and were checking out a really small laptop in the window. Some young teens came by and asked us for spare change, and we claimed not to have any. They all looked perfectly clean and well-kept, not street punks. We decided they should be asking their parents for money, or working a part-time job.

In the coffee shop, which was part of a chain called The Daily Grind, The Gryphon and I ordered nonfat lattes and sandwiches while my sister and her husband just got coffee. We liked the name of the place, since a coffee shop called The Daily Grind used to be a favorite hangout in State College back in the day, in part due to the free refills they offered until people began to abuse the privilege.

Since it was a nice day, my sister suggested eating outside. The Gryphon and I were waiting for our food inside when a server told us she'd bring it out to us. I'm not sure how long it took, but their kitchen was clearly backed up. Still, my veggie wrap on a spinach tortilla was one of the best I've ever had. I loved the blend of hummus and veggies.

By this point, the wind had picked up and the clouds had darkened. Plus, the time was creeping towards mid-afternoon, so we knew it was time to leave. At a gazebo near the parking lot, I had my sister get a picture of me and The Gryphon, so we could have at least one nice one of us from the trip.

We took a different scenic route on the way back, which turned out to be more scenic than we expected. My sister exclaimed, "Is that a giant octopus?" Yes, indeed. It was part of Dinosaur Land, a roadside attraction that also features a whale and, according to the Web site, plenty of dinosaurs. We agreed we'd come back the next time we visit. 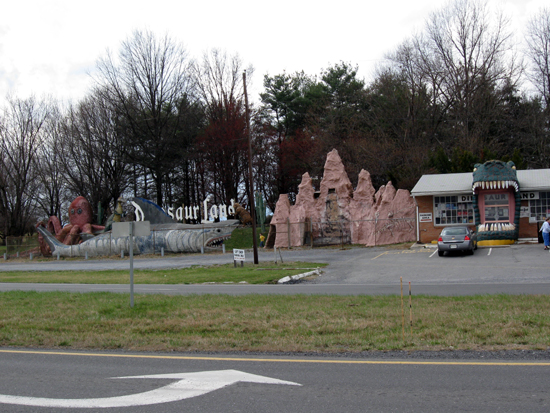 Before The Gryphon and I got on the road, I took a nap in the guest room. I was starting to fade and wanted to drive safely. Ludo, who is perhaps the most mellow kitty I've met, was already lying on one side of the bed. When I joined him, he looked over at me, then nuzzled my face a bit and went back to sleep.

I would have slept longer, except that Una was restless. She could hear people coming in and out as they loaded up the car. Every time, she would bark and run out to see what was happening. I eventually locked her out, but even this didn't solve the problem. Every few minutes she came back and butted her head against the door, trying to push it open. I did drift off for a while, dreaming about dull repetitive sounds, and then finally gave up.

Just as we were leaving, the Girl Scouts arrived with a cookie order for my sister and her husband. They were kind and didn't open them in front of me, knowing that I have will power issues when it comes to Girl Scout cookies. If I see a table where scouts are selling cookies, I just give them some money instead.

The drive back went smoothly and featured some unexpected delights. The first was a rainbow in Maryland. I wanted to pull over on the highway, but The Gryphon nixed that idea, so I got off at the next exit and pulled into a Sheetz parking lot. This turned out to be a perfect place: you could see both ends of the rainbow, spread over a green, rural landscape. I took several pics until I was sure I had at least a few good ones. They're without a doubt the best rainbow pictures I've ever taken. 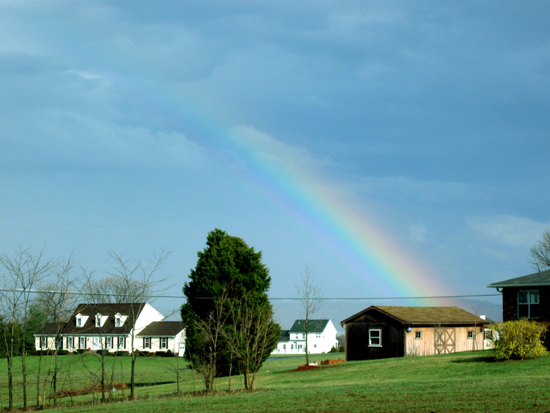 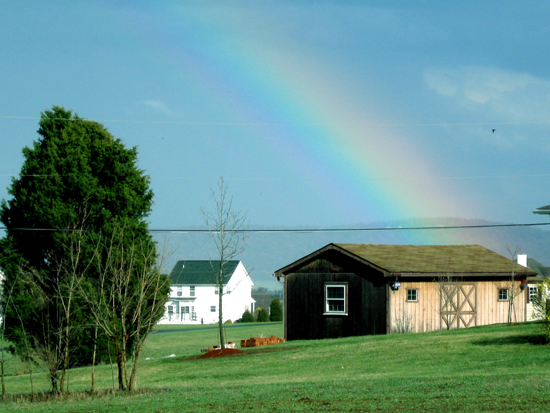 A rainbow spills over the outbuildings at a country home in Maryland.
(Faster-loading version) 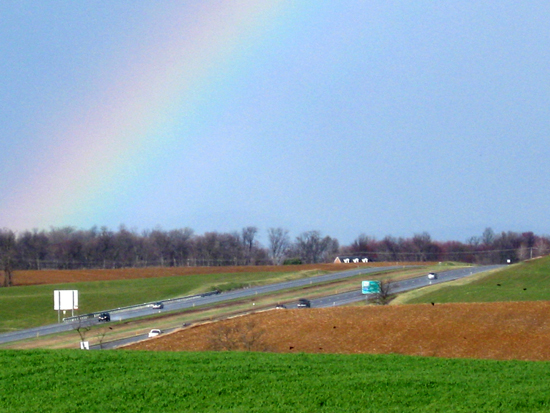 A rainbow over a Maryland landscape, with rolling hills and a road.
(Faster-loading version)

Soon afterwards, we stopped at a rest area in Maryland to see what they had for dinner. I was beginning to lose hope, looking at all the menus offering deep-fried items. Then The Gryphon suggested Sbarro's. Turns out that, in addition to pizza, they serve pasta. If you order it with a salad and turn down the extra garlic bread, it's a reasonably healthy dinner.

It wasn't long after that we saw another natural weather phenomenon. We could see lightning through clouds in the far distance. The skies were clear where we were, so it was amazing to watch these flashes of white and yellow light burst again and again inside the charcoal gray clouds.

I guess we were at the right place in the right time, which seemed to be the story of the day.