NaPoWriMo: Day 12 (Just Barely Made It!)

I am participating in National Poetry Writing Month, where the goal is to write one poem a day for 30 days. During the month of April, I will be using the writing prompts at ReadWritePoem.org and posting the results.

Day twelve prompt (where do you come from?)

Today, think about where you grew up. The country, the state, the town, the street, the house, the bedroom, the bed. Be specific. Be sensual (as in capture the smells, the sounds, the taste, the scratch of your towels without fabric softener). Write a poem that shows where you come from in all its unique glory. 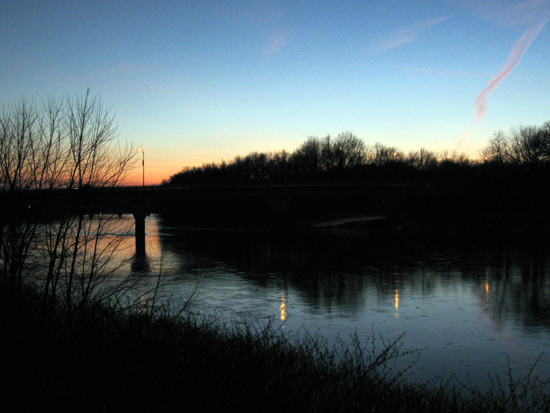 The sunset over the river in December

On a beautiful evening, Mary Belle Lontz
is planting flowers in the small garden
next to the United
Methodist Church. She pulls the flowers
out of an empty Eggo box. Spring
is kind to this town. Everything is in bloom,
including American flags. There are five growing
from a planter on one porch.

I am walking
my dog to the park
where I used to ride on my bike almost
every day in summertime,
spend the day in the swimming pool.
I'd come home, breathless, having inhaled
half the chlorine pool into my lungs.
How I stayed chubby
is anybody's guess.

I remember my brother's
baseball games, bringing fold-up chairs,
sitting on sidelines. The outfield
still looks the same. The infield:
brown dust with chalk lines. A low fence
to keep the grounders on the playing field. A lone
ambulance, sitting by the bleachers.
There's one field with a real
scoreboard and bleachers. That's only
for the best teams. When
my brother's team would win, we'd get
ice cream at the Tastee Freez. Sometimes
even if they lost.

The people here
avoid meeting your eyes. To find people
more taciturn, you'd have to move
to Minnesota.

Una's happy anyway. Smell of vinegar
on French fries. People cheering for their young
athletes, maybe the one time
they'll shine. I don't remember my brother
being this young.

The one exception
to the "no eye contact" rule:
elderly people on porches. They're
used to the days when people
took walks in the evening, greeted
each other. To them
it's perfectly natural. Was it TV
that killed that neighborliness?

Una and I visit
one of my favorite haunts: Harmony
Cemetery. We're here
to find my tree. My mom taught me
to walk next to the headstones
so you don't trample
on anyone. Two broken
headstones lean against a tree.
Wrong tree. And a little further on,
I think that's my tree. No,
mine was further in. You couldn't
see it from the road. "Sheep."
There's a stone reading
"Sheep." All of these family
names are still
here today: Ritter, Miller, Kurtz,
Noaker, Showers, Coup.
Not Sheep, though. Clewell,
Eisley, Wolfe, Karchner, Cromley.
Strine, Bubb, Noraconk.

So calm right here. The breeze
is always perfect. "I watched
the sun come up here, Una."
Blessed be.

We make our way quietly out. Godcharles, that's
a benevolent name. A bunny! And a cardinal! What is this
stone gate all about, the symbolism? Nobody
leaves but those who can walk?
"When you were a puppy,
I used to bring you here, Una, remember?
Remember?" She thinks she knows
where she's going. She's leading me

past the fabric company, the dye house, over the industrial
railroad tracks — smell of tar, broken down houses.
I didn't exactly live
in the best part of town
when I was a reporter here. Then there's
the steel company, bought by some Russians who promise
to start it back up. I wonder
what Una will do
when we walk past
the old house. Una's going to run
up to the porch and think
we can go inside,
and everything
will be right back where it was
three years ago.

There's the corner
where my cat was killed. For months
afterwards, you could still see
the bloodstains. I think
they've repaved it.

Una didn't even hesitate
in front of The Crackhouse.
Guess it's only me
that has these hang-ups. The landlords
still haven't reattached
the mailbox to the wall
on the porch. Probably
haven't repaired one thing.

And here we are,
back downtown. Una bounces on her toes, smiling
at each new scent. I imagine
what it must be like, seeing
this town through her eyes.
A wealth of flowers, and
bees and other dogs. Maybe
her memories are like that, too. A wealth
of scents, most of them good.

I was suffering from a terrible sinus headache for most of the day, and after eating dinner, when it abated, I had to work on our taxes. Finally, I managed to get to this poem, with only an hour left in the day. I chose to write my own "found" poem, drawn from an earlier entry I'd written about walking around my small town, called, "Small Town Cruising."

Although it's not mentioned in this poem, I spent the first five years of my life in the business district of this industrial Central Pennsylvania town. Then my family moved across the river to a more rural village, although I still attended high school in this town. I returned here after Penn State to spend several years as a reporter for the local newspaper, during which time I lived in the industrial section.

Moral:
If prose is poetic enough, it makes a fair enough poem.