It's been too long since I shared some found items. Since it's taking me longer than I expected to watch Oliver! (the next movie in the Oscar series), I'll take a time out and share some finds with you. In honor of the rapidly warming weather and the resulting spring fever, I bring you some finds to make your mind wander.

First, a little paper version of Independence Hall, found this week. Each of the details is actually a separate piece of paper, glued onto the red card stock. It's really quite astounding. Too bad it was a wet day when I found it: the tower is faded.

There's some adhesive on the back, which suggests it had been part of a larger creation. I'm imaging a whole scene of Old City Philadelphia, made of carefully glued-together paper. Maybe I'll find more buildings. Maybe the paper craft Liberty Bell.

Next is a CD I found quite a while ago. It's labeled, "My New Haircut - Fucking Skanks." It contains four tracks, which are the same musical track repeated four times. It seems to be the first few bars of "I Wear My Sunglasses at Night" by Corey Hart, looped. The music is the background music for the comedy video, "My New Haircut" (funny but NSFW due to language) by L2X productions.

The original video seems to have spawned a slew of parodies, which are a great time waster. Some use the same music, while others don't. Since Brett Tietjen and Mike Allen, the minds behind the video, are based in New York, it's probably not their copy of the music. It might, however, be the music somebody else burned in order to produce their own haircut video.

Reader involvement is encouraged for the last two items. First is a piece of paper that seems to be part of a child's game. A piece of paper had been folded up, and written on it were the words "sapphire," "jewels" and "star?" Tell me what game you think the children were playing. 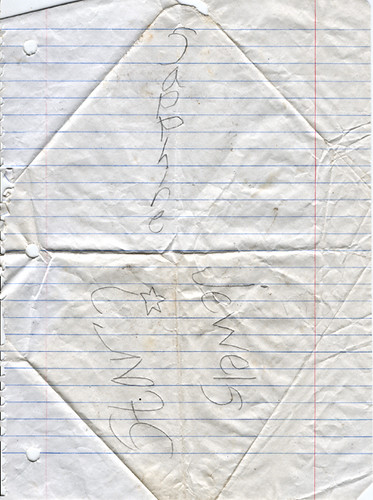 The final item is a doodle found on a piece of green lined note paper. It is a very simple drawing, just a smile, but it has a particularly manic, almost alien feel to it. Tell me what this drawing evokes for you. What could make you smile like this? 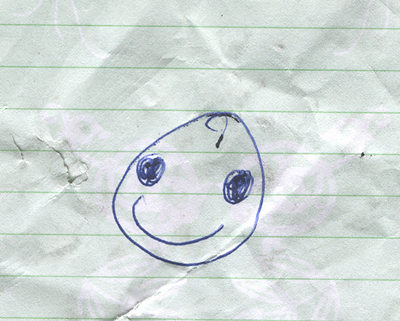 May you have an enjoyable day, whether you're getting stuff done or just staring out the window.

Moral:
Anything can be food for thought when spring fever takes hold.