This was the weekend of my dad's medical convention, which made for a busy weekend, starting with Friday night and the black-tie-optional dinner. Saturday we met him and his girlfriend for dinner and saw a couple bands at Milkboy Coffee in Ardmore. 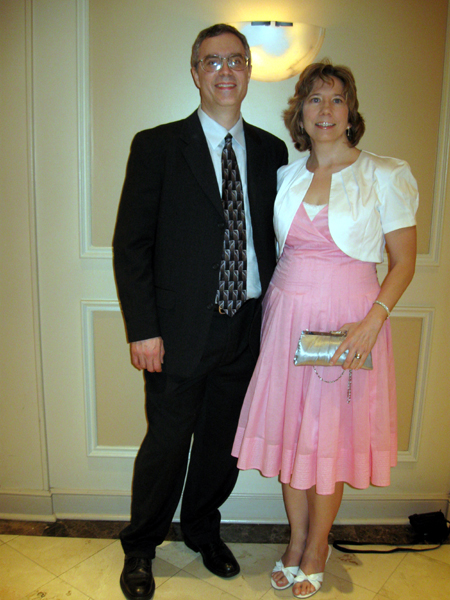 The Gryphon and I at the dinner

My husband, The Gryphon, and I always try to get there in time for cocktails, and we always get there a little later than we intend. Dad was waiting for us in the lobby, and we took a couple minutes to get pictures of us in our nice outfits. Then we went to the club area for the cocktails.

It was really dark in there, and everyone was jammed into a small area between the bar and the table with fruit and cheese (there wasn't really any dance music playing, so people avoided the dance floor). I was already hungry, so I loaded up a plate with fruit and a little bit of brie. I was proud of myself for declining a couple hors d'oeuvres that were brought around on trays.

This year, we'd gotten a table closer to the stage at the insistence of my Dad's girlfriend, The Adventurer. She might not have bothered, though, if she'd know what the sort of music the band would play. 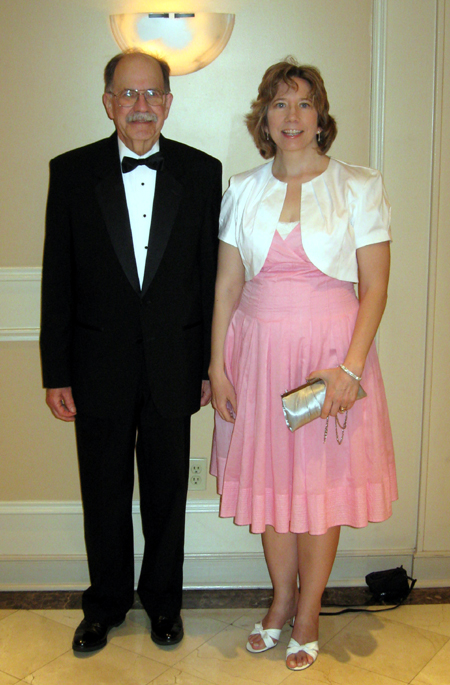 Dad and me at the dinner
(Faster-loading version)

For dinner, we had a salad, some pasta, steak with a twice-baked potato and asparagus, followed by a delicious chocolate cake (which you already know if you've been following my camera-phone diet entries). I was really full by the time I finished, figuring I'd dance it off. Again, I didn't know what I was to expect. 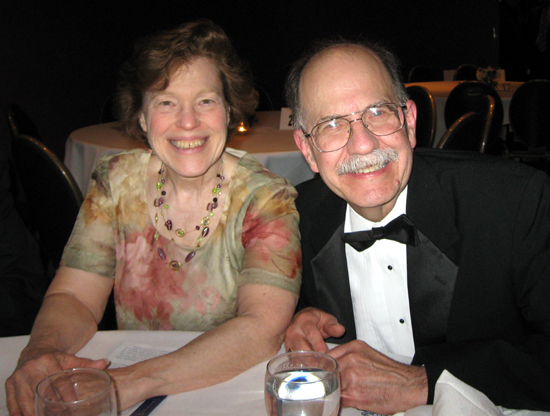 The Adventurer and Dad at dinner
(Faster-loading version)

After the usual procession of speeches and presentations, the Mummers came out and put on a great show. I got up and danced, along with The Adventurer, and my Dad's med school buddy, The Life of the Party, and his wife. 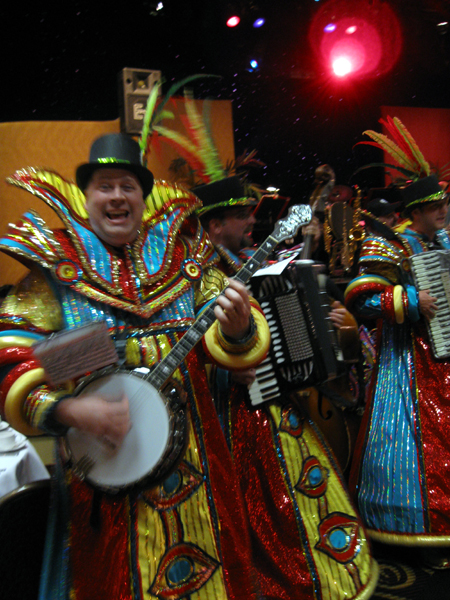 Mummers love to have their picture taken, as his smile shows.
(Faster-loading version)

The band that provided the rest of the evening's entertainment, however, was a bit of a disappointment. They played a lot of jazz standards but didn't pay upbeat or swing. So unless you were interested in slow dancing, you were left out. This was disappointing to our table, because we love to cut a rug on the dance floor. In previous years, they've usually had bands that played popular songs, or at least music that was upbeat enough for dancing. 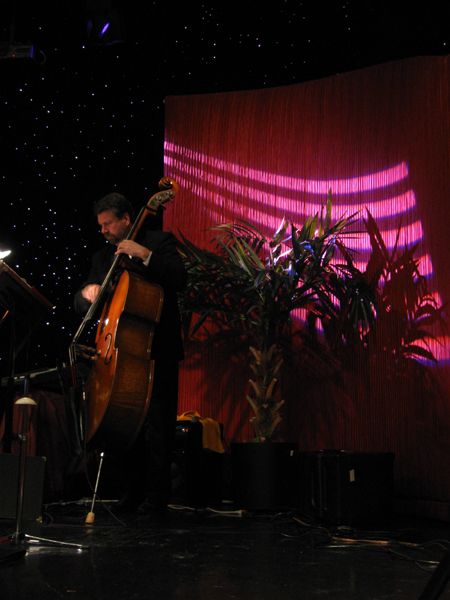 The bassist is intent on playing
(Faster-loading version)

This year, not only had I eaten a huge dinner, but except for a few slow dances with The Gryphon, I couldn't work any of it off. By about 10:30, The Gryphon was tired (he'd had a long week), so we said our goodnights, promising to e-mail pics to everyone once I have them in an online album. 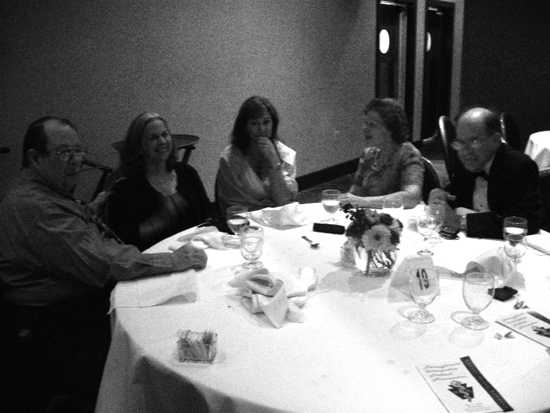 (from left) The Life of the Party and His Wife,
Mrs. Doctor (without her husband, Mr. Doctor), The Adventurer, Dad
(Faster-loading version)

At home, I searched online to find something to do with Dad and The Adventurer the next day. Dad had suggested maybe something involving music, so I searched fruitlessly until someone in an online Philadelphia community suggested checking the Milkboy Coffee event calendar. I struck pay dirt: finding a concert involving three groups described as "folk rock," which would be of interest to Dad, a folkie from way back.

So on Saturday, Dad and The Adventurer drove to our place in time for dinner. After giving The Adventurer a quick tour of the place, we talked about where to eat. We settled on Taqueria La Michoacana in Norristown, one of The Gryphon's favorite places for Mexican food. Even though it wasn't terribly close to the coffeehouse, we figured we had time to get there and back.

This turned out to be a great choice. We got seated right away, and there was something on the menu to suit all of us. I wasn't terribly hungry, because I'd had a late lunch, so I ordered the tortilla soup, along with a Mexican salad (with pickled peppers, tomatoes, avocado, and cheese).

We made it to Milkboy Coffee in Ardmore early enough to get our pick of seats. I also ran around and collected four cushions for our hard chairs, since I knew that otherwise it might be an uncomfortable evening! 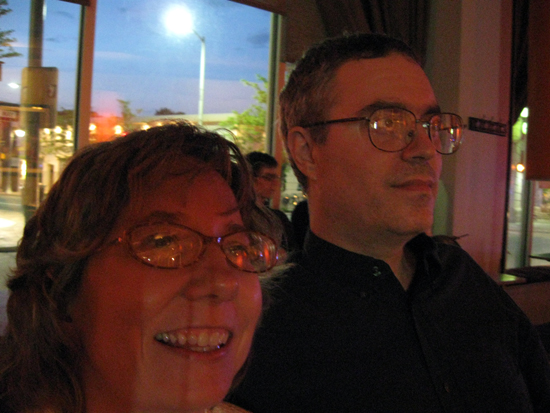 Me and The Gryphon at Milkboy Coffee
(Faster-loading version)

Turns out the opening act hadn't shown up, so Bill O'Meara and Dave Applegate, both of whom were scheduled to appear with their bands, took turns playing solo. Since the guy who hadn't shown up was named Brandon Hayes, Bill called himself "Hayes" and Dave called himself "Brandon" during their opening act. This turned out to be a great thing, because we got to hear them on the stage with just a guitar, focusing on the music and the lyrics.

I bought a Bill O'Meara CD during the break and signed up for his mailing list, because I was very impressed with his evocative lyrics and clear vocals.

Next, Dave Applegate took the stage with his band, The Beekeepers, which consists of Dave on vocals and guitar, with brothers Graham Osbourne (bass) and Owen Osbourne (drums). At the beginning of the show, I didn't know what to make of them, because they seemed very loose, but as the set continued, they grew more comfortable on stage. They actually did some fairly impressive things musically: such as pausing a song for a couple beats and then picking up in a different tempo. As they did this, they didn't even seem to give each other's cues. It seemed like they were reading each other's minds.

I was impressed with Dave's song writing. While Graham had teased him from the stage that no one listens to lyrics, I do, and I found his lyrics to be insightful and sometimes funny. I thought that he was a great storyteller. 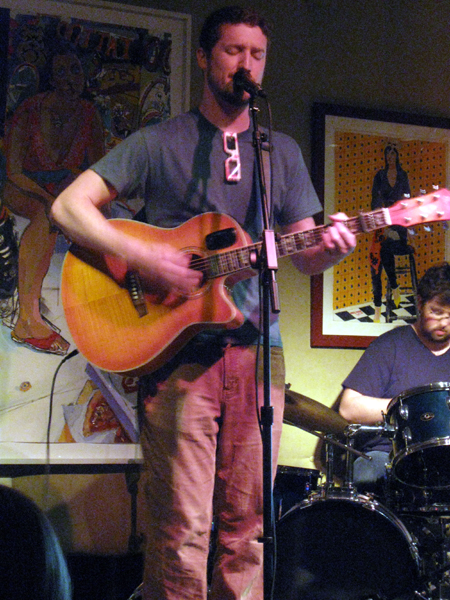 Dave Applegate performs with his band, The Beekeepers
(Faster-loading version)

During the break, I wanted to buy one of his CDs. It was ten bucks, but I only had a twenty and he was fumbling for change. Noticing he had another CD for sale, I told him I'd buy that one, too. The second CD was only seven bucks, so he three in an EP with five songs to round it out.

If you check out his MySpace page, listen to "This is Not a Song About You." A warning, though: it might be in your head all day!

Then the Bill O'Meara Band came up. They were very professional, playing a very tight set of folk rock with some other influences. Some tracks reminded me more of southern rock. They put on a great show, commanding the stage and keeping the audience riveted (except for a few teenagers who were apparently just there to have a place to go on a Saturday night). The Gryphon and I were particularly impressed with his guitarist, Erik Sayles. We were a little disappointed to learn that he wasn't the guitarist on the album I'd bought. Hopefully, Bill O'Meara will do a new CD with his current band.

If you check out his MySpace page, my favorite song of his is "Seven Mountains." I also like "Passing Time '08." 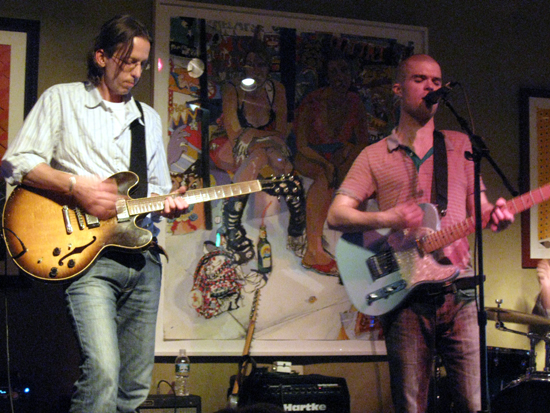 I love seeing live music, and Dad liked it, too. The Adventurer liked The Beekeepers better, finding the Bill O'Meara Band a little too loud. Ultimately, though, it was a nice way to spend time with them, in a relaxing setting. And even though we didn't get to dance, we got to sample some local music.

Moral:
As much as I listen to music, nothing compares to feeling that bass through the floor.