Last night, my husband, The Gryphon, and I saw Spinal Tap in the Keswick Theatre. They were on their "Unwigged & Unplugged" tour, where they were playing acoustic versions of their songs, along with songs by The Folksmen, the folk group followed in the mockumentary, A Mighty Wind, directed by Christopher Guest. Since it stars a lot of the same people, the movie is considered a cousin of Rob Reiner's famous rock mockumentary, This is Spinal Tap.

We had arranged to meet our friend, The Dormouse, at the theater. Then we all walked across the street and ate at the Keswick Tavern. I had the crab cakes, which were served with a Thousand Island chipotle sauce, along with vegetables and garlic mashed potatoes. I also had a side salad. The sauce was a little too spicy for me, but the mashed potatoes were delicious. However, they gave me so much I couldn't finish them all.

Then we picked up our tickets at Will Call (which was being handled from a folding table in the lobby) and made our way inside. There was a very nice merchandise table with all sorts of T-shirts, many of them featuring art from the various Spinal Tap and Folksmen albums (most of which, of course, were never actually released but were mentioned in the respective mockumentaries).

Our seats were in the back section, just three rows from the back wall, but it was still a decent seat. The Keswick Theater is fairly small. I think they can only fit a couple thousand people in there. So while we couldn't see the facial expressions of the people on-stage, we still had a good view.

Harry Shearer, Michael McKean and Christopher Guest took the stage, which was bare except for their instruments and a large projection screen. Sure enough, they were "unwigged," dressed in regular street clothes, rather than the costumes of either of their on-screen personas. Harry wore a long-sleeved dark green shirt with dark pants, Michael a button-down shirt and a sports jacket with jeans, and Christopher a button-down shirt with jeans. Most of the talking throughout the evening was done by either Harry or Michael, with Christopher interjecting funny comments. The chemistry between them was great, underscoring Michael's preamble of the show, where he asked the audience to think of the concert as just sitting around an apartment, listening to friends play for you.

After the applause died down, they kicked off the show with an a capella song I didn't recognize but probably came from the Folksmen, and then led into an acoustic version of the Spinal Tap song, "Hell Hole." I found it simply brilliant. The audience was laughing as they got to chorus and we finally recognized the song. Let me tell you: there is something absolutely fab about hearing those hard-rocking Spinal Tap songs done acoustically. From that, they led into a Folksmen song, "Never Did No Wanderin'," which blended almost seamlessly with the previous song.

Throughout the concert, they gave background information on the songs, which was a wise move. I'd guess that only a fraction of the people in the audience had seen every one of their movies together, namely This is Spinal Tap (1984) (all four on screen), Waiting for Guffman (1996) (Christopher on screen and directed; Michael and Harry wrote songs), and A Mighty Wind (2003) (all four on screen; Christopher directed). I have seen them all, as well as Best in Show (2000) (Christopher directed; Christopher and Michael on screen) — what can I say? I love improv comedy — but I'm sure many audience members needed some education.

A particularly amusing aside came from Michael, who was introducing "Rainy Day Sun," which was a Spinal Tap '60s psychedelic track, the B-side of "Listen to the Flower People." He sort of paused and then said, presumably for the younger people in the audience, "You see, there used to be a thing called records." He then went on to describe what records were and how they worked. Hilarious.

Of course, even if they hadn't been so good about setting up their songs, you would have been able to tell which group did which song by a couple key indicators: for the Spinal Tap songs, they tended to take a wide-apart "rocker" stance, particularly Michael; for The Folksmen songs, Harry Shearer often played an acoustic bass and Christopher a mandolin.

I was trying to remember the set list in my head, and I know that the first half is correct. Here it is in order, with a few notes from their introductions:

a capella fragment
"Hell Hole" - Spinal Tap
"Never Did No Wanderin'" - The Folksmen
"Clam Caravan" - Spinal Tap (a typo for "Calm Caravan," never noticed by the band)
"Loco Man" - The Folksmen (their only calypso tune)
video of the first TV appearance of Spinal Tap, on Reiner's pilot, The TV Show
"Bitch School" - Spinal Tap (video for which was too sexist for MTV)
"This Bulging River" - Blaine Theater Group (an outtake from Waiting for Guffman)

As a preamble to "This Bulging River," they showed a video clip of Christopher as Corky St. Clair, the artistic director for the small-town theater group featured in the film. He is dancing oddly across the room, working out choreography for the group's original musical. That elicited a lot of laughter and applause.

At about this time, they invited a keyboardist to join them on-stage. At this point, much as I tried, my short-term memory short-circuited, so the rest of the set list is in only approximate order (and if anyone who was there would like to correct me, I'd appreciate it):

Let me pause and explain the "3-D" part. Before that song, they announced that it was a special audience participation song, but for only one audience member. They announced random seat numbers until they hit on somebody willing to come up: seat FF4. When she got to the stage, they gave her a pair of 3-D glasses, explaining to the audience that they didn't have enough for everyone, so we'd have to appreciate the experience vicariously. Then, as they played "Listen to the Flower People," with her standing in the orchestra pit near the stage, they occasionally came swooped up to her with their guitars or made trippy motions with their fingers. She was a good sport, and everyone loved it.

Again, I have to pause to describe "Big Bottom." They not only played it acoustically, but they played a sort of Beatnik coffee-house version, with the audience snapping their fingers and an interpretive dancer joining them on-stage. I can't remember the last time I laughed so hard.

"Do What the Good Book Tells You To" - The Folksmen (joined by Michael's wife, Annette O'Toole, who has a terrific voice)
"A Kiss at the End of the Rainbow" - Mitch and Mickey

A little explanation of that last song. Mitch and Mickey were played by Eugene Levy and Catherine O'Hara in A Mighty Wind, one of several faux folk bands followed by the mockumentary. Mitch and Mickey had once been lovers, flying high when they wrote this signature song, traditionally ended by a kiss. By the time of the mockumentary, they're estranged, which makes it awkward to perform in a comeback performance. In this show, Michael and his wife Annette sang the song, and she kissed him sweetly afterwards before waving at the audience and leaving the stage.

They also did a second encore, but for the life of me, I don't remember what it was. Perhaps that's because I was so distracted by them coming back out wearing Phillies jerseys! The audience loved that. They joked that, ironically, they wear them to every show.

Throughout the show, they threw in several fun extras, including a fan-produced video for Spinal Tap's latest single, "Back from the Dead," featuring people dancing in someone's back yard, wearing makeup and a skull mask. They also played a Lego version of the Spinal Tap song, "Tonight We're Going to Rock You Tonight." Michael said he loved the fact that everyone in the audience was holding their hands up in a "C" (which is, of course, the way that Lego people's hands are formed). He encouraged us all to hold our hands up that way, which became a running joke throughout the show.

Another fun extra was a dramatic reading of the censorship notes made by a standards and practices guy at NBC before This is Spinal Tap aired for the first time on network TV. Some of the notes made sense, such as swearing (the audience recognized the lines and cheered), but some of them were ridiculous, such as censoring the line "armadillos in our trousers." I'm fairly sure that blanking that out only made it seem like they'd said something worse!

Near the end of the show, they turned up the house lights and took questions from the audience. Some of the questions were very astute, clearly demonstrating a knowledge of their combined body of work. Others were typical fan-boy questions, like, "Can I have a guitar pick?" One poor guy stumbled over his words and used the phrase "not a real group" when he was trying to ask them about the fact that some musicians have genuinely been influenced by Spinal Tap. Harry tweaked him about this, saying, "You think we're hurt that you say we're not a real group, but you paid money to be here." The fact that they're "not a real group" became a running joke for the rest of the show.

One of the jokes about Spinal Tap, of course, was that they took themselves way too seriously. They were dim bulbs who wrote tough-sounding lyrics that were unintentionally funny. Yet, they did have a sensitive side, as evidenced by their earlier songs (shown in the movie and also included on the soundtrack). Always products of their time, Spinal Tap wrote earnest '60s pop and indulgent '70s rock anthems. Through it all, though, you could sense the true meaning behind many of their lyrics: they just wanted to please their listeners. Almost every song was begging the audience, "Love me, 'kay?" I think that was one of the reasons This is Spinal Tap became a cult hit. The band might have been deluded about their talent, but they were always earnest. They really loved the music, and they wanted their audience to love it, too.

In much the same way, The Folksmen were old-time folkies who maintained a professional demeanor despite big changes in their personal lives (such as Mark Shubb, played by Harry, deciding he wanted to become a woman). Whereas Spinal Tap were all about machismo, The Folksmen are the opposite: sensitive dreamers who wanted to relay important messages. While Spinal Tap just wanted to be loved, The Folksmen wanted the world to love each other.

Behind all of these characters are Michael, Christopher and Harry, three friends who still clearly love what they do, and who love to make the audience smile. This concert, as promised, was like hanging out with friends while they performed for us and told us stories. It was a great time, and I highly recommend catching them on their further tour dates if you get a chance. 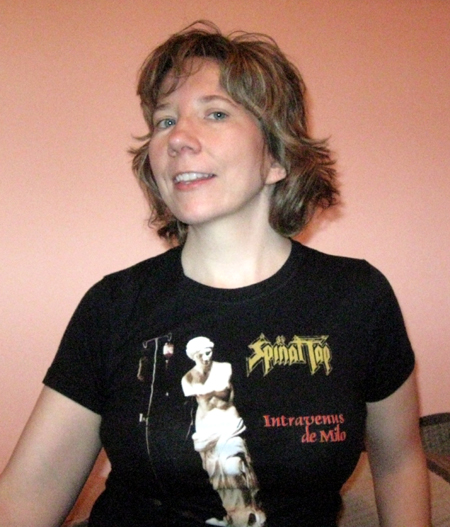 Me in the Spinal Tap shirt I bought

Moral:
If you love what you do, the audience will love it, too.