On Saturday, my husband, The Gryphon, and I attended an Otakon meeting in the Baltimore area. We got there early enough for the board meeting, since The Gryphon is on the board. 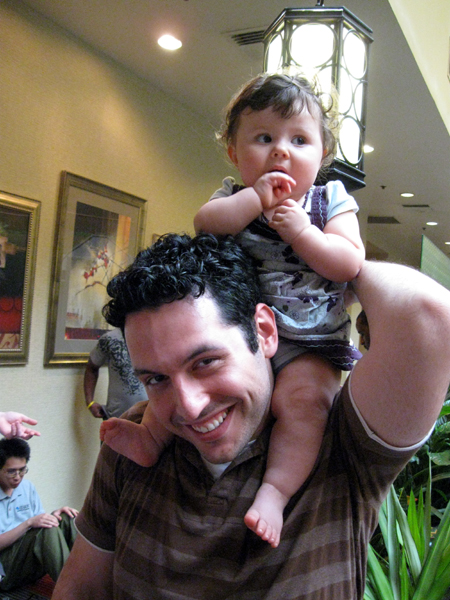 A friend with his cute baby
(Faster-loading version)

The non-board members had to wait in the hall, and we got into an entertaining conversation about pop culture, such as the new Star Trek movie and superhero cartoons.

We came up with the idea of Spock-quaman, who would swim around the ocean with his hands behind his back and mind meld with all the fish. He would be a big fan of being logical.

The meeting went smoothly. One officer joined us via teleconferencing, which I think might be the first time we've done that. Technology grows in leaps and bounds.

Since I'm a multi-tasker, during the meeting, I sifted through more Otakon Press Relations mail, approved some more press passes, and worked on a couple press releases that should be going out soon. During breaks I connected with a lot of people to take care of logistical concerns for Press Relations.

One of the highlights of the meeting was to meet in person, and actually hold, the publications head's adorable daughter. She is only a few months old and extremely photogenic, laughing easily at just about anything. She also can make a raspberry sound really good and was making a repetitive raspberry sound after we got her started, which everyone nearby found entertaining.

At the end of the meeting, a bunch of us were talking about where to eat. The Godfather, who is head of Guest Relations and my superior, invited us to join him and a group of people at a Japanese fusion restaurant, the Rumor Mill, recommended by The Invisible Man's roommate. By the time we headed out, there were 16 total people. Fortunately, we'd called ahead.

They gave us an entire section of the second floor. Since the space was ours, we were free to mingle between tables or even call out a comment across two tables. Considering the size of our group, the service was excellent. I've been to many places with large groups and had the servers be completely overwhelmed, but through a combination of an astute server and good communication with the kitchen, he kept the food flowing without anyone feeling overlooked. 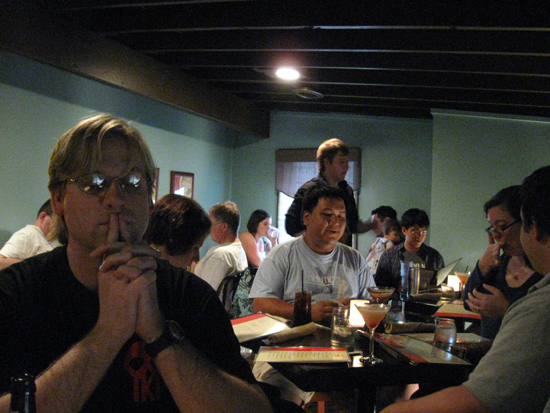 Since there are so many great small dishes on the menu, both The Godfather and our president, Matt the Minion (who acquired his nickname when he held a lowlier title), ordered several small dishes as their meals. The Gryphon and I started out by sharing some sweet potato French fries and duck won tons. For my main course, I had sweet and sour chicken with rice, and for dessert, The Gryphon and I shared banana won tons. They were crispy and delicious, with chocolate poured over top. The coffee ice cream had large chunks of chocolate in it. I wish I could have eaten a whole bowl!

Everybody seemed to enjoy themselves. The Invisible Man's roommate was pleased that the group liked the restaurant choice so much. I have a feeling many of us will be back.

Ellicott City, where the restaurant is held, has interesting historical buildings, containing little shops. We would have liked to do some window shopping, but it was too late by the time we were done eating. While the rest of the group headed back to the hotel to socialize (since many of them were traveling from afar and staying overnight), The Gryphon and I drove home to Philly. On the way back, we saw some fantastic heat lightning, lighting up the sky without noise or rain.

Sunday was a quieter day. We went to breakfast at a diner we hadn't tried before: the Llanerch Diner in Havertown. It's a small place that looks very dated inside, but they offered a number of tempting breakfast items. I ordered an egg white omelet with lox and onions. It was a bit strange to eat lox warmed, but I thought it was tasty, nonetheless.

Back home, I worked on more Otakon stuff, while The Gryphon played his favorite online game, EVE Online. At dinner time, we decided to check out a Greek festival at a Greek Orthodox Church, since we'd seen signs about it at the diner. We had to park a little far away, and then walk back, because they had the street in front of the church blocked off.

As we neared, we saw carnival booths with prizes such as huge inflatable dolphins. We could hear traditional music drifting from the stage, and we were greeted by a friendly woman at the info booth who handed us a pamphlet and told us there are Greek festivals all over this summer, if we'd like to attend more.

We were hungry, so we went inside first to order entrees (outside were mostly booths containing snacks). I ordered the moussaka, which is like a Greek lasagna, with layered meat and vegetables but without noodles. It was served with a side salad containing two types of olives, some green beans, and a vegetable dish. The food was delicious, but I couldn't finish all of it, and I got a box from the cashier to take about half of it home.

Then we looked at some art that was for sale by a local painter. His paintings of Greece were the best, mostly because of his use of vibrant color. There was also a display of religious icons, but neither of us was interested enough to look at them up close.

Outside, we stopped at the baked goods booth and ordered one serving each of baklava. We found two seats in the front, facing the stage, and enjoyed our dessert while listening to a band playing some traditional Greek music. I was going to get a little closer and take more pictures, but the show ended.

A couple groups of dancers performed: children from a Greek school. Although the program said that the purpose of the festival was to introduce people to Hellenic culture, the guy who announced the dancers did so only in Greek! Of course, a majority of the people in attendance probably understood him.

The first group of dancers seemed to be beginnings. They were more hesitant and relied heavily on watching two dancers, a boy and a group, at the head of the line who had more skills. 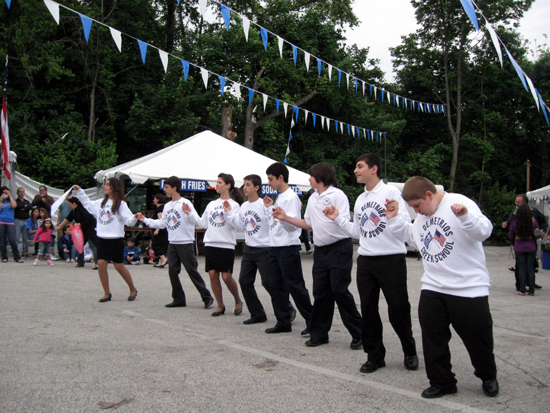 The second group of dancers was much more coordinated and seemed more at ease. 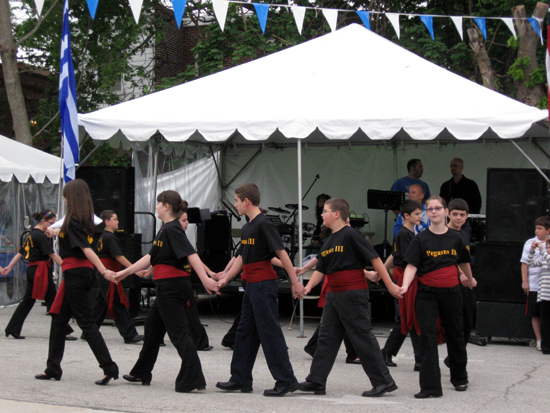 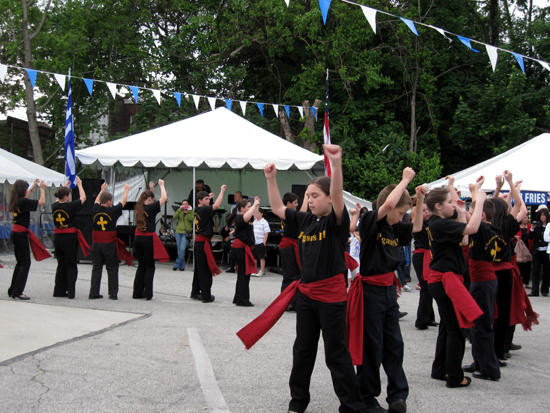 One thing I noticed about this type of dancing: the dancers themselves often get a better view than the audience. Since they are revolving in a circle, facing inward, half of the time, the audience could only see their backs.

I always love to see folk dancing from different cultures. I wish that I could have gotten up and joined them. So did a little girl who was about 2 and kept bouncing around happily and then trying to join the dancers.

We left after the second group because it was unseasonably cold and windy. Back home, I caught up on some social networking sites, just for fun. Of course, I'm behind in all such things, because I've been prioritizing my work for Otakon. Then we both watching an episode of Medium I'd recorded on the DVR.

Also this weekend, I watched Mama Mia. I remember that earlier this year, a male friend of mine confessed that he'd loved the movie and was surprised by how much he'd liked it. I, too, expected the movie to be hokey, but while there are some deliberately campy moments, there is also some great acting. Don't forget: Meryl Streep was nominated for a Best Supporting Actress award for this movie.

Streep acts not only when she's speaking but also when she's singing. Unlike the leads of some famous movie musicals of the past, she sang her own songs, and she did an excellent job.

After watching it once, I watched it with the director's comments and learned that Streep was as serious about the making of this movie as she is about a drama. She actually re-recorded one of the songs voluntarily after seeing the rough cut, saying she could do better. Streep also made useful suggestions that enriched the film.

Like the paintings we saw at the Greek festival, the colors are extraordinary in this film, which seamlessly connects the on-location shots with the studio shots.

In some ways, Mama Mia reminded me of Across the Universe, since it took songs that had already been written and worked them into a narrative. I think that's easier with Abba songs than with Beatles songs, since they tended to write about common human experiences using very general language, whereas the Beatles would tell stories about very specific people, rich with detail.

I also watched Frost/Nixon this weekend. It is based on the series of interviews that British journalist did with former president Richard Nixon immediately after his resignation, in which he managed to get him to admit wrongdoing.

The story of the interview is an interesting one, and the film follows the crew through the process of obtaining, researching and filming the historic interview. Much of the film has a West Wing quality to it, showing people working behind the scenes and talking strategy, all in the interest of helping out the one person who has to get up publicly and make it work.

The filmmakers paid careful attention to detail in the setting and the costumes, much of it based on period photographs.

Both Michael Sheen, who plays Frost, and Frank Langella, who plays Nixon, do an excellent job. Interestingly, the DVD includes an extra that shows some clips from the actual interview. Nixon, in real life, was a bit more subdued, but his body language was clear as day. Langella played up the emotion in order for his portrayal to carry more impact.

The Gryphon like this movie, as well. We both like movies about historical events, particularly when they contain new information. Seeing the behind-the-scenes drama unfold was fascinating, I thought.

Any history buff will love this movie. While it does tend to be "talky," it should appeal to other viewers, as well, including West Wing lovers, of course.