Today I'm starting a new feature I hope to do on a regular basis. I'll be sharing old photos or passages from old journals, letters and other memorabilia.

Earlier this year, I visited my dad and helped him look through his photos for pictures of him as a young man. My sister wanted to include such a picture in a locket she received as a Christmas gift. Since my Dad has all of my Grandma's photos, as well, we found some interesting pics.

In particular, I was interested in some photos from Halloween 1982. As the photos show, both my sister and brother had very impressive costumes. Me, however, not so much.

My sister went as a raccoon in a costume sewn by my mom. When my sister was young, Mom liked to sew her costumes from patterns she got at the craft store. Usually, they were cute, fuzzy animals. This continued for several years until my sister insisted she'd like to go as something human, for a change. 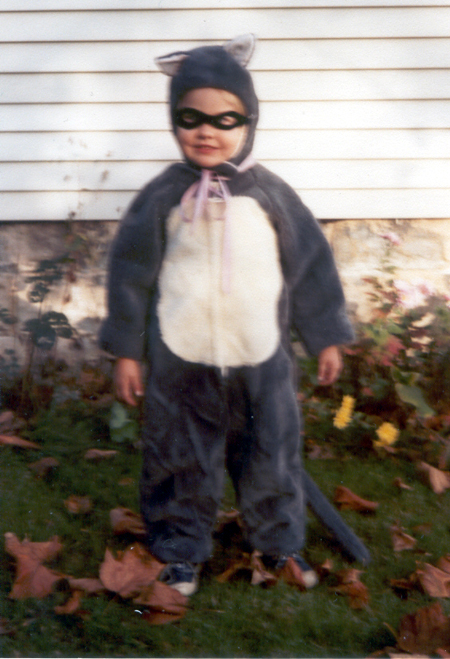 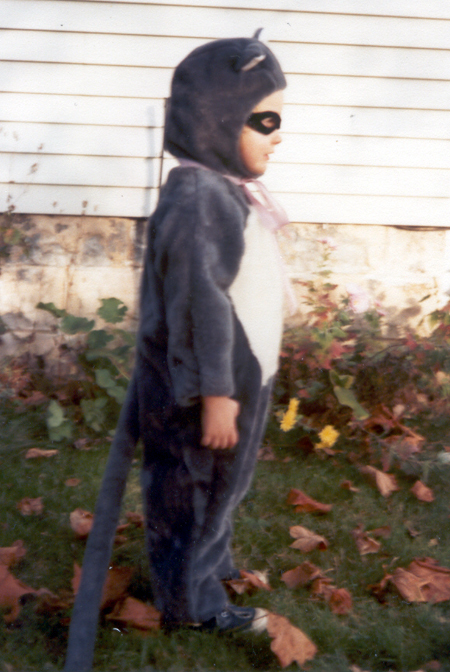 My brother was wearing his most fondly-remembered costume: Pac-Man. I can remember he and my parents working on it in the yard, painstakingly sizing and painting cardboard, fastened together to form the familiar shape. That year, he won a costume contest at the community party. None of us ever won costume contests, but this was the height of Pac-Man fever, and his costume was well made.

If you look carefully at the front view, you can see my brother's eyes. 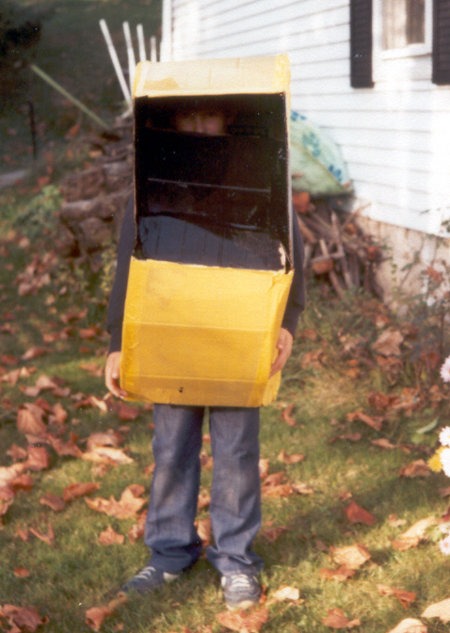 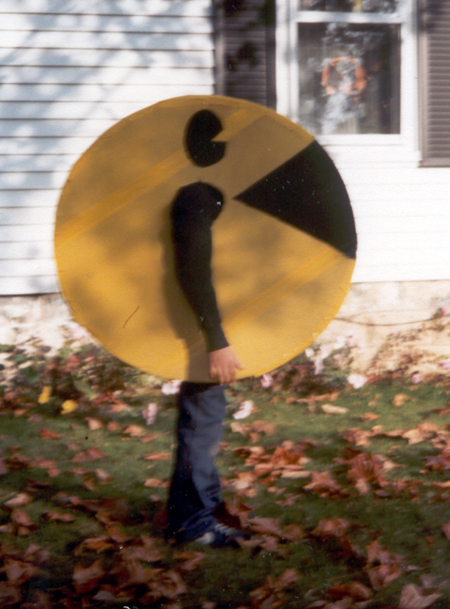 You can tell these photos were taken by my grandmother, who believed in proper coverage for archival purposes. Thus, we have front and side views of the costumes. She didn't take nearly as much care to document my costume, and when you see it, you'll understand why.

Now, it's been a long time since this particular Halloween, and I'd completely forgotten what my costume was the year my brother wore his famous Pac-Man costume. Turns out there's a good reason.

At first glance, it's not immediately obvious I'm wearing a costume, dressed as I am in what appears to be fairly typical '80s street clothes (a pink shirt under a white glittery V-neck, with decal jeans and black pumps). I have, however, added a few accessories: namely a set of what we called "deely boppers," or a plastic headband topped with wobbly spring stalks and Styrofoam shapes covered in glitter. In addition, I have a bandana tied around my leg and am carrying a fake microphone, made from some sort of a stick and a big lump of aluminum foil. I'm also wearing a half mask, which was probably my effort to signal: "Hey, this is a costume, everybody!"

Perhaps because someone had suggested that it was difficult to figure out what my costume was, I wore a sign around my neck, which read, "THE GREATEST ROCK STAR EVER." Because, of course, all rock stars wear deely boppers, bandanas and appliqués. I assure you, that's not what rock stars looked like, even in 1982. 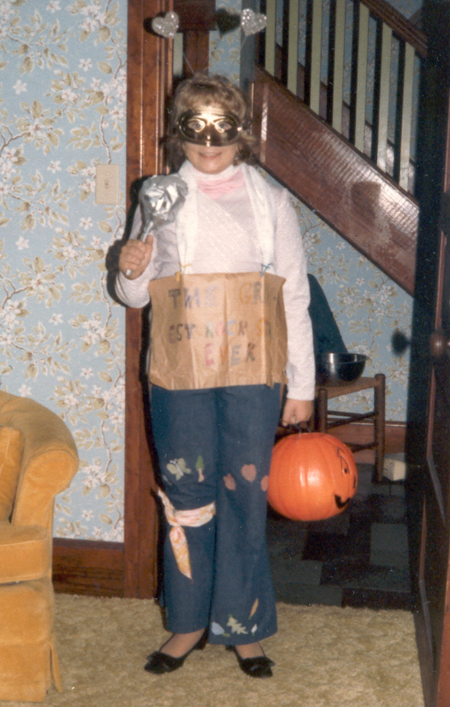 And no, I wasn't supposed to be a specific rock star, just a rock star, as evidenced from this diary entry from October 27: "Tonight was the Halloween party down at the park. I went as a rock star. [My brother] and [my sister] got prizes. [My brother] was PAC-MAN. [My sister] was a cat." That's odd. I could have sworn from the pictures that she was a raccoon. I guess it's the black felt mask and lack of whiskers. I wonder if they would have given her the award if they'd realized she was a cat and not a raccoon. But I digress.

Back then, I used store-bought diaries, compulsively filling the space allowed for each day, or about half a page. So there was no room to explain exactly what was going through my head when I put together this costume. I read back through several weeks of entries to see if I'd written anything about planning the costume, but there was nothing. In addition, I have apparently blocked it out of my memory. Again, for obvious reasons.

At first glance, it might seen unfair that my parents spent so much time helping my younger brother and sister, and clearly let me fend for myself in the costume department. But since I know myself, I'm guessing that I'd probably assured them I didn't need any help. I've always prided myself on being independent and would probably have refused any help they offered. If I had told my mom I wanted to go as a rock star, she might have sewn me a glam outfit, or an Elvis cape, or a punk-rock costume. But I can just imagine my 12-year-old self shaking off such a suggestion: "Elvis? Come on, Mom. Don't be ridiculous."

I will now show you further photographic proof of how far this costume was from being the best costume ever. My grandmother had a better costume. 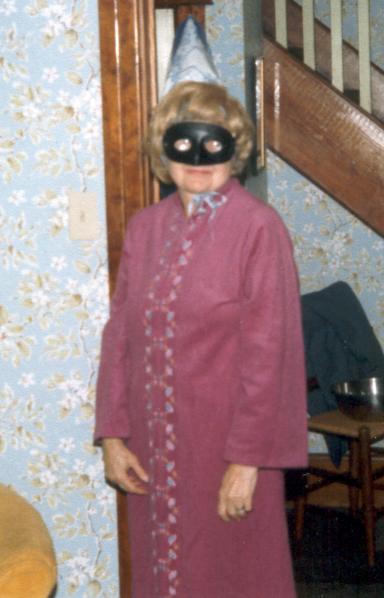 While there's no mention of it in my diary, I'm guessing from the long robe, the wig and the pointy hat, that Grandma was a wizard. Just by wearing a bathrobe and a half-mask, my grandmother put together a better costume than mine.

Although I didn't find any insights into my costume planning, I did find some funny entries. Even at this early age, I was already beginning to note interesting details about the world around me. For example, this amusing paragraph from the October 22 entry:

A cat wanted to get into school. Stephen Canfield said, "Aw, let him in. He just wants to be educated." He smelled fish, because it was lunch time.

I found it an amusing anecdote, slipped into an otherwise ordinary day. In particular, I found it interesting that, even at such a young age, I was using proper punctuation. It also struck me as funny that I felt the need to suggest a reason the cat might have been trying to enter the school. Always analyzing, this Virgo.

But it was this paragraph about a school dance on October 21 that made me laugh out loud:

There was a sock hop in the Jr. High Gym for Jr. High students only. It started at 6:30 and it ended at nine. I wanted so bad to dance with Marv Miller but somebody punched him so hard he couldn't stand up and he had to go home.

Apparently, I was so upset about this incident, I forgot all about proper punctuation. Of course, again, since I was keeping my entry short to fit the space provided, there is no additional information. Who punched him? Why? Perhaps he faked his own incapacitation to avoid dancing with me. Quite frankly, looking at my Halloween picture, I can understand.

Interestingly, rereading these entries, I could remember nothing about Marv Miller, even though I apparently had a crush on him at the time. I was finally able to find a photo of him in a junior-high school yearbook from eighth grade (which was a couple years after this). He looked a lot like another guy I liked at the time: skinny with light brown, wavy hair and freckles. He must have moved away soon afterwards, because there are no further pictures of his. This would explain why I no longer remember him. Either that or I'm blocking out some even more embarrassing 12-year-old behavior. Perhaps it's for the best.

Moral:
If Mom offers to sew you an Elvis cape, take her up on it.