As part of the LJ Idol contest a few months ago, I wrote a piece called "A Little Less Lucy," about how I was more like Lucy Van Pelt than her brother Linus growing up: bossy and fiercely independent. Well, I can now provide you with proof of these tendencies, through my mother's own words.

A little while back, I borrowed my baby book from my mom, with the intention of creating a high-resolution scan as part of my digital archives project. I have since been distracted with other tasks, and so the baby book sits in my in-box, along with a host of other items. But I flipped through it last night to determine what I could share as part of the Memory Box series on my blog.

Most of the book is handwritten by my mother, who sought to fill in the multiple sections about my growth and development from years one to seven. She also mounted some photos in the book, sometimes in accordance with directions and sometimes, I imagine, because she simply liked them. The book also bulges with additional items my mother tucked inside: studio portraits of a drooling baby Alyce, certificates from a Salvation Army baking class, and newspaper clippings of me as a spelling bee winner (a task I didn't achieve until I was much older than 7).

A two-page spread provided space for keeping track of "mischiefs" and "disasters." My mom wasted no time filling this in, since I was apparently already starting trouble at the tender age of 4 months. 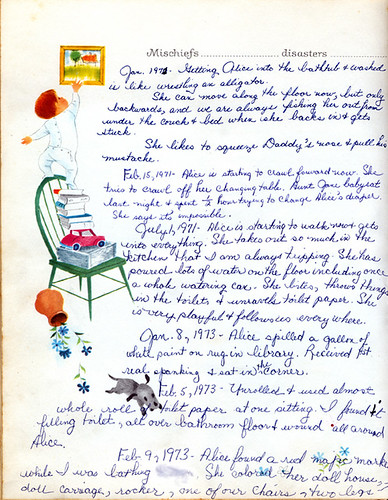 Don't be confused by the fact that my mother spells my name "Alice," because that is the legal spelling. I changed it, unofficially, when I went to college and have been confusing banks and bill collectors ever since. What do you expect from a Lucy?

Jan. 1971 - Getting Alice into the bathtub & washed is like wrestling an alligator.

She can move along the floor now, but only backwards, and we are always fishing her out from under the couch & bed when she backs in & gets stuck.

She likes to squeeze Daddy's nose & pull his mustache.

This entry is proof of my independent spirit. Why should I let it hold me down that I can only go backwards? If only I had figured out how to navigate better. And I was not the first baby, incidentally, to enjoy squeezing Dad's nose. His nose is very squeezable.

The second entry is dated about a month later:

In my defense, the cloth diapers my mother used for me were, I imagine, darned uncomfortable. Besides, didn't anyone understand I needed to crawl somewhere, now! I had baby things to do, baby people to see!

My mischief got worse as I became ambulatory, as the third entry shows:

July 1, 1971 - Alice is starting to walk now & gets into everything. She takes out so much in the kitchen that I am always tripping. She has poured lots of water on the floor including once a whole watering can. She bites, throws things in the toilets & unravels toilet paper. She is very playful & follows us everywhere.

Years later, my mom asked me if I remembered taking pots and pans out of the kitchen. I told her that I did. She asked me if I remembered why. Was I trying to help her cook? No, I admitted. In fact, I was trying to play music. You see, I'd seen something on Sesame Street where they made drums out of pots and pans. They also changed the sound of some of them by adding water. I suspect that explains my obsession with pots, pans and water. Far from evidence of an early interest in cooking (I mean, really, do you KNOW me?) this seems to be early evidence of my interest in the arts.

The toilet paper, though, I don't remember. At all.

There were no entries for almost two years, probably because my mother got pregnant with my brother and was busy with another baby. My parents did some redecorating about the time that my brother got old enough to need his own room, which probably explains the next entry:

Jan. 8, 1973 - Alice spilled a gallon of white paint on rug in library. Received 1st. real spanking & sat in the corner.

By this point, the charm of having a young, mischievous baby girl was wearing thin, as you can tell by the much sparser entry. I also don't remember the white paint, so I can't tell you if I spilled it on purpose. There's about a 50/50 percent chance that I did.

The next entry sounds like a photo you'd see on a tacky greeting card:

Feb. 5, 1973 - Unrolled & used almost whole roll of toilet paper at one sitting. I found it filling toilet, all over bathroom floor & wound all around Alice.

I think my mom is missing the significance of the fact that I was making an effort. I mean, I was 2 1/2 years old and apparently wanted to use the toilet by myself. While I don't remember this incident, I imagine that my behavior was driven by fascination at watching the toilet paper spill off the roll. Whee! 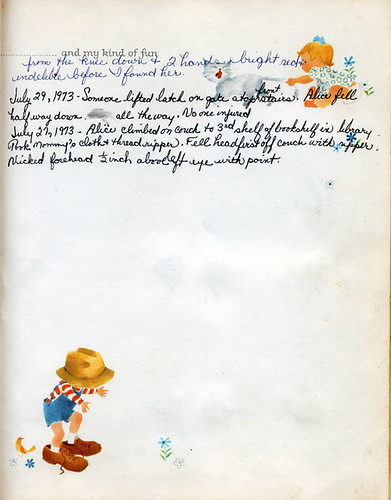 You remember that Steven Wright line, "Small world, but I wouldn't want to paint it"? Well, sounds like I tried:

Feb. 9, 1973 - Alice found a red magic marker while I was bathing [her brother]. She colored her doll house, carriage rocker, one of our chairs, two legs from the knee down & 2 hands bright red & indelible before I found her.

Funny as this entry is, I can only imagine my mother's horrified reaction when she discovered what I had done. Not to mention the weeks of explaining my unusual tint to the neighbors. Although it's not included in this entry, I suspect this incident precipitated my second real spanking.

The next entry may or may not be my fault:

July 29, 1973 - Someone lifted latch on gate at top front stairs. Alice fell halfway down. [Her brother] all the way. No one injured.

How does Mom know that I was the one who lifted the latch? Maybe my brother did it, and I was just trying to rescue him from the stairs. Then again, given the increasingly self-destructive nature of my mischief, I probably was the "someone" who lifted the latch. I probably also didn't realize this would lead to a dangerous fall but believed I was a big enough girl to walk down on my own. Clearly, I overestimated my own abilities at navigating stairs.

This was only one of several terrible falls on those stairs, not one of them leading to serious injury. Maybe we had a Guardian Stair Angel, cushioning our fall.

The final entry, in July 1973, was terse, and though there was a lot of space left on the page, she neglected to write any more. I suppose that keeping track of my mischief was no longer as much fun, now that she had my brother to watch, as well.

I have no idea why I climbed on the couch to get the seam ripper. Most likely, I was fascinated by it, since I'd seen Mom rip out hems. If I hadn't fallen, I suspect my next move would have been to do some clothing alterations. My mom, by the way, had a name for this sewing tool: Jack the Ripper.

Reading through these entries, I am not only indebted to my mother for putting up with all my shenanigans but also somewhat amazed that I grew up relatively unscathed, despite all my "mischiefs" and "disasters."

In just the first few years of my life, I gave my mom plenty of reasons to want to take me back to the baby store, but she continued to bandage my boo-boos, correct my missteps, and tell me that she loved me. Her attention to this baby book shows she was capable of looking past the misdeeds and seeing the curious, creative, independent-minded girl behind them. 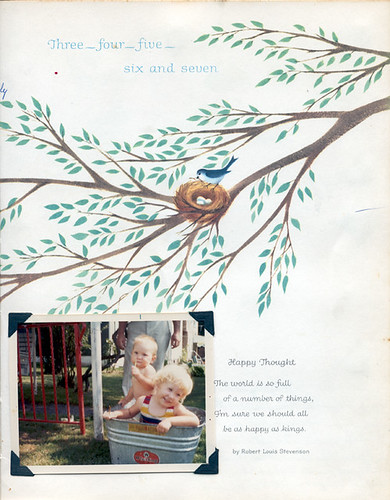 One of my favorite pages in the book has always been this one, which was just a filler page, really, containing a drawing of a tree, along with a fragment of a Robert Louis Stevenson poem:

The world is so full
of a number of things,
I'm sure we should all
be as happy as kings.

Next to it, my mom affixed a photo of my brother and me, dressed in bathing suits and "swimming" in a metal tub in my grandparents' yard. The smile on my face in this picture, I believe, is the Alice my mother never stopped seeing, no matter what I did. Instead, she found the humor in the situation, turning my exploits into funny stories, some of which have since become part of family legend.

I'm going to visit her in a couple weeks, and even though I've already sent her a Mother's Day gift, I think I'll tell her just how much I appreciate it. 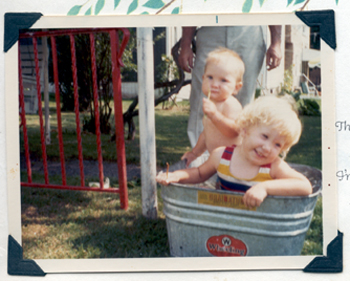 Moral:
Even a mischievous toddler eventually grows up.