I'm back in Philly, and it seems small and quiet compared to New York. My husband, The Gryphon and I traveled to the Big Apple to spend time with a college buddy, The World Traveler, and attend a party held by Doc the Stampede.

I have tons of pictures and a lot to say, so I'll spread it out over several days. Highlights include seeing a Mets game, seeing the John Lennon exhibit at the Rock 'N' Roll Hall of Fame Annex, checking out Central Park, the party, and dim sum in Chinatown.

Friday, after dropping our doggie at the pet sitter's, I returned to finish getting ready, which involved packing and finishing up some Otakon Press Relations business. We stopped at the bank and the video store before getting lunch at a little coffee shop. Finally, we headed for 30th Street Station, dropping the car in the long-term parking and purchasing our round-trip tickets. We missed our train by about 5 minutes and had to wait an hour for the next one.

So we waited in a coffee shop, where The Gryphon fired up his laptop and sent an e-mail message to The World Traveler to tell her what happened. This would throw a wrench in the plans. We were supposed to go to her office, get her apartment keys, drop our luggage and then meet her back there, thus saving time for the trip to the stadium.

I spoke to a woman who had a notebook marked "Poetry." Turned out that, like me, she's been writing it since she was young. Afterwards, I wrote a poem, since it seemed fitting.

The trip was otherwise uneventful. Trenton Station was still undergoing improvements, so there were plywood barriers everywhere, just in different places than last time.

After arriving at Penn Station, using instructions from the World Traveler, we took the subway to her place. Whenever we needed help, we seemed to find it, such as a young woman in a green dress who was standing next to the machines where you bought a Metro card and confirmed they were the right ones. She was also walking towards the same train, so we followed her. At the platform, a very nice gentleman reassured us we had the right one and even sat near us, watching us to make sure we took the right stop. I felt like I was paid back a little karma for having giving instructions to tourists in Center City Philadelphia.

Due to missing our train, we arrived at The World Traveler's office building just as she was leaving. But our timing turning out to be a boon. We were meeting a male friend of hers, and he was running late, too. As it turned out, we arrived at the meeting place before him.

This was the first time that either of the New Yorkers had been to the new stadium, Citi Field, which still had that new car smell (not literally, but it sure was brand spanking new). I took this shot as we first walked up to it, showing the sign and the people milling about, waiting for the game. 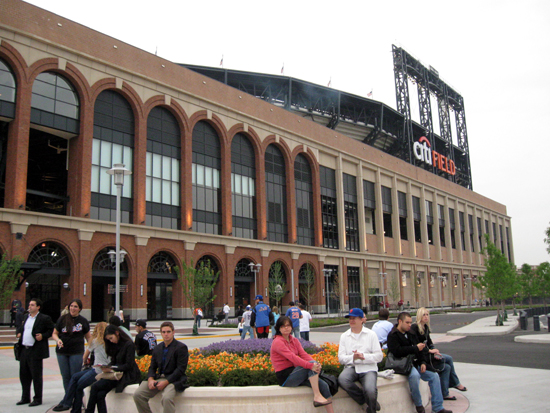 Inside, there were shops at ground level, and you took a central escalator to the game seating. The World Traveler got our tickets from a season ticket-holder, her chiropractor, who wasn't using them that game. So they were pretty decent seats; we had a great view of the outfield (grin). We also got lucky with the weather. Although it had threatened to rain, we only got a few sprinkles, not even enough to don the ponchos I'd brought.

Here are some shots of the field I took from the stands. 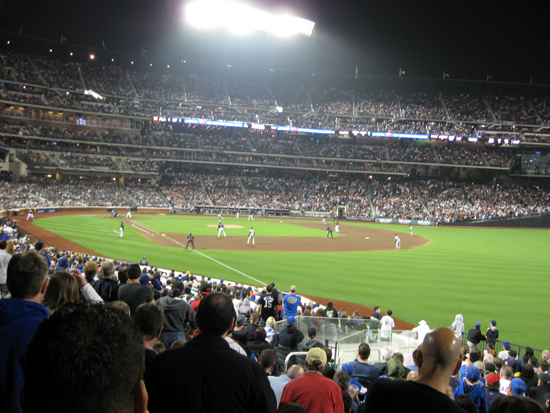 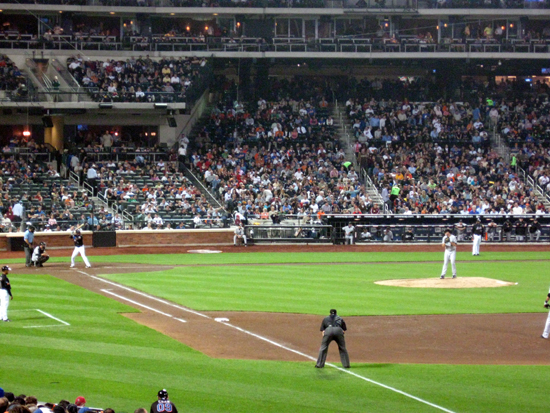 Before we settled in to watch the game, we got dinner from the concession stand. They had a variety of choices, and I managed to get sushi and a fruit salad, while The Gryphon opted for a sandwich. The sushi was surprisingly good, considering I bought it at a baseball game. On the way back to our seats, we spotted the mascot, Mr. Met. Unfortunately, that was the only time we would see him, so I never got a photo.

One of my favorite aspects of the game were the interactive things they do for the fans. For example, they have a big screen, where they put up live video of the fans. This includes the "Kiss Cam," where they zoom in on couples, and the couples kiss. They also play music and show shots of the fans dancing, and they throw free T-shirts into the stands with a huge sling shot. There are cheer alongs, the most common of which is "Let's Go Mets," or signs encouraging people to make some noise. Here's a couple shots of the big screen. 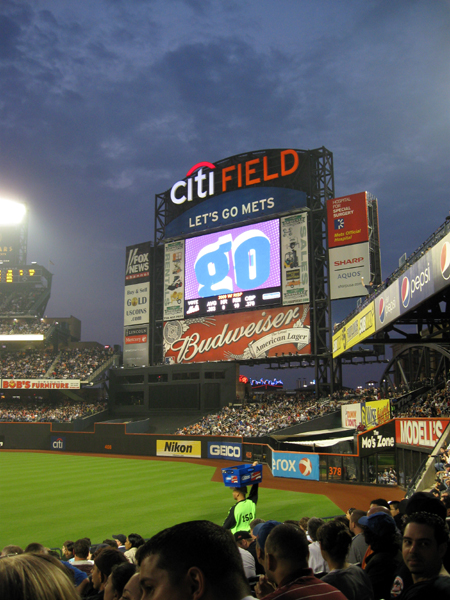 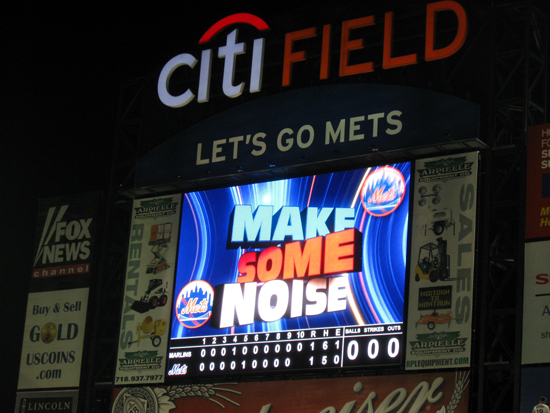 One particularly enthusiastic fan, known as Cow-Bell Man, clanks a cow bell to encourage fans to cheer. He even wears a jersey that says "Cow-Bell Man." I know because we saw him after the game. I tried for a candid shot of him posing for a picture with a kid, but it didn't turn out. 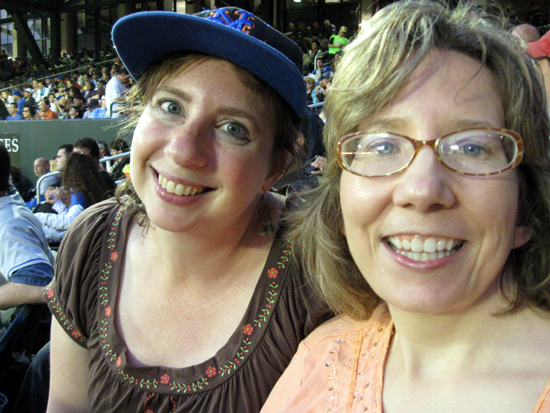 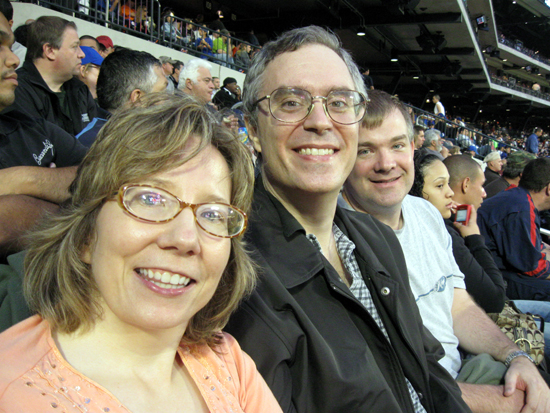 The game was tied 1-1 at the bottom of the ninth, so we went into extra innings. This helped make up for the fact that we'd arrived late. When they did won, it was very exciting. A Mets player stole two bases, so that he could potentially get a run with just one hit. Sure enough, he did it, and the stands erupted in cheers.

Of course, some people headed out right after the end of the ninth. Maybe they had somewhere to be. Or maybe they wanted to get out of the parking lot before everyone else. I don't understand it.

Watching the game was fun for me, mostly because of the people watching. We were in the midst of the season ticket holders, who wore Mets gear and were in good spirits, even when it looked like the other team might pull ahead.

Afterwards, The World Traveler suggested we go to Big Daddy's Diner and share some sundaes. I'd been there before with her when I visited with my College Roommate in December. They have the most delicious special sundaes.

On the way, we stopped at Grand Central to look at the beautiful station and to try out something called the Whisper Corner. The World Traveler's friend led us to it. Turns out it's a little archway where, if you stand in one corner and whisper into the wall, somebody on the opposite corner can hear you. We tried it out, and it worked.

I also got a nice shot of the main concourse area, which has nice stone work and high lofted ceilings decorated with constellations. 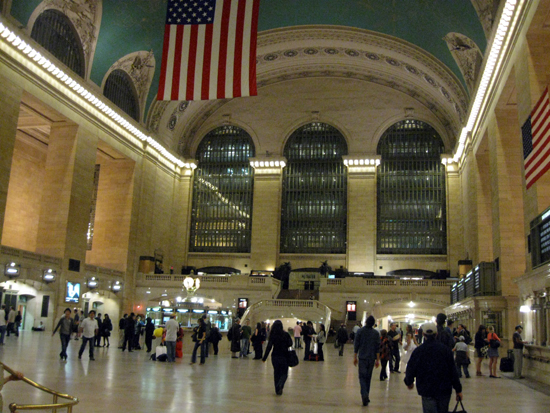 This time, Big Daddy's [SITE HAS MUSIC] was a little more crowded than last time, probably because it's much warmer than in December. This is the diner with the retro feel, decorated with memorabilia dating from '70s and '80s, with an emphasis on the '80s. Clearly, they're aiming at the Gen X-ers, much like retro diners used to target the Baby Boomers.

We ordered a S'more Sundae and a Big Daddy sundae, both of which were packed with goodness. It's a good thing we had four people to eat them, because they were huge. Unlike in December, they melted a little faster, soon becoming ice cream soup. We toyed around with the idea of making and selling Ice Cream Soup. I'm sure it would be a big seller.

Afterwards, we talked for a little while outside before The World Traveler's friend caught a cab home. I took a few more pictures. These are my favorites. The first shows The World Traveler, her friend, and The Gryphon smiling at a joke. The second is a close-up of the lit "Diner" sign. 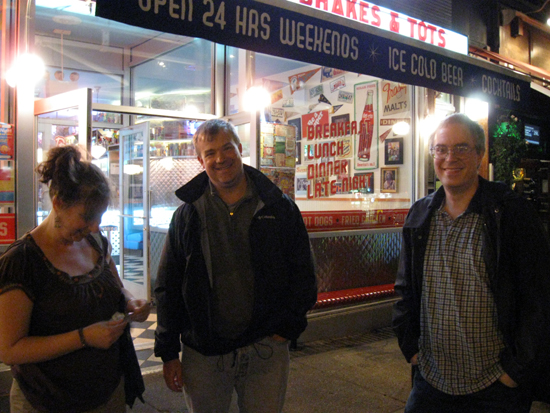 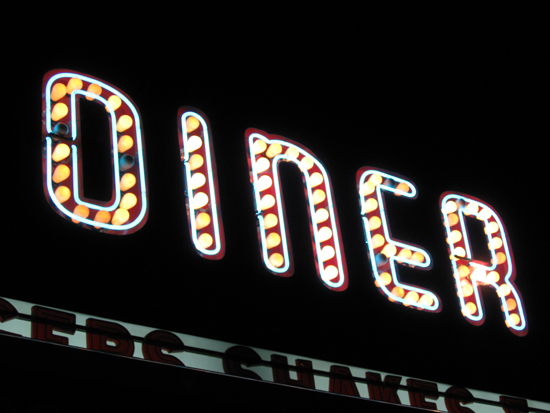 Moral:
Changed plans often work out for the best.