After last weekend in New York, this was a very quiet weekend for my husband, The Gryphon, and I. We stayed home and worked on personal projects. 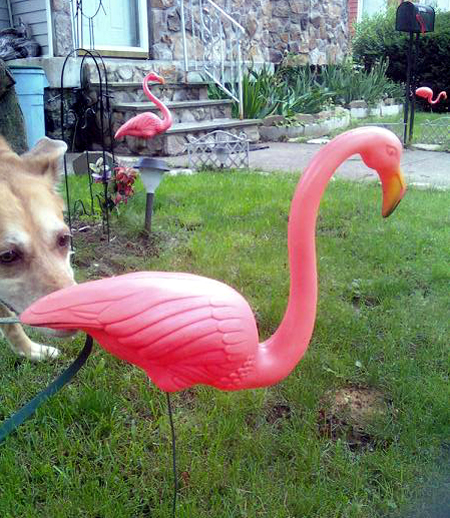 Saturday, I primarily focused on Otakon Press Relations business, taking care of the last of the requests for press credentials, which came in right around the deadline. I also prepared a list for the correspondence secretary, at her request.

That morning, we ate breakfast at a local diner. Afterwards, we went to Whole Foods in Ardmore to look for ingredients for a dinner The Gryphon wanted to cook on Sunday: duck crepes, from scratch. Since they didn't sell duck, we drove through town looking for a butcher shop. We couldn't find one, but it turns out that the Ardmore Super Fresh had duck.

On our explorations, we noticed a Thai restaurant, the Thai Pepper restaurant, so we returned there later for dinner. The restaurant is actually now combined with Mikado, a Japanese restaurant, and the menu offered food from both cuisines. I had some Pad Thai.

Among other things I did Saturday: go through my photos for the last year and a half to find something for The Gryphon to use as a profile pic on Facebook. After all that trouble, the wedding pictures turned out to be the best ones.

I also sorted through some self-portraits I'd taken on Thursday, to update my profile pics on both Facebook and Twitter. Here are a couple of my faves. I'll have to remember that my left side is my good side. 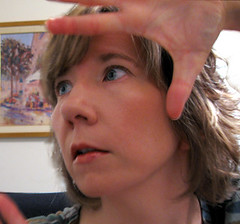 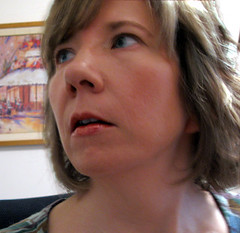 On Sunday, we stayed in and had frozen waffles for breakfast. They were just as good, I felt, as breakfast at a diner.

In addition to trying (and failing) to get caught up on such social networking sites as LiveJournal and Twitter, I worked on the summer issue of Wild Violet. I got the main issue graphics done, including selecting a background graphic and creating the title graphics. In addition, I did graphics and page layout for half of the poetry pages.

Unfortunately, the redesign will not be ready for the summer issue, so I'm going to use the old format for this issue. Hopefully, we can start getting portions of the new design, such as the arts blog, going soon.

For dinner, The Gryphon made the aforementioned duck crepes, which included homemade barbecue sauce and homemade crepes. It was truly delicious. As good as any restaurant.

Moral:
When you're a multitasker, you get a little bit done of everything.