From about third or fourth grade until my senior year of high school, every summer I attended camp at Hartman Center, affiliated with the United Church of Christ, my family's church. Unlike many camps, it wasn't for the entire summer. You would choose from a variety of theme camps and attend, usually for a week. The Music and Drama Camp (MAD) was a little longer, so the campers could rehearse a big performance.

I started in the pioneer camps, where you "rough it" by staying in A-frames rather than cabins. When I was old enough, I sampled different special camps, including Crafts, Art and Photography and Sketching (CAPS); Music and Drama; and even Backpacking. Every one of them was a special experience. While I was always a little nervous when my parents dropped me off, by the end of the week, I was in tears at the thought of leaving my new friends. Some of them became pen pals who carried on a correspondence with me for years, and sometimes we arranged to meet again at camp.

At the earliest opportunity, I went through the Counselor in Training (CIT) program and became a volunteer camp counselor. My goal was to be like Bill Murray in Meatballs, the fun-loving, understanding counselor who could make a difference in kids' lives. The culmination of my counseling experience was serving on the summer staff (Camp Family) at Hartman Center, the summer after my freshman year in college. 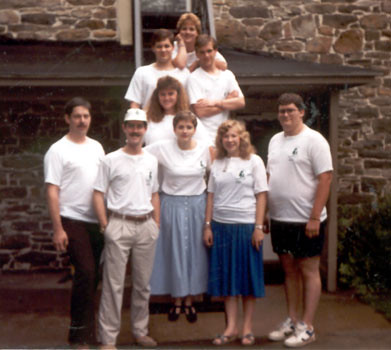 We had permanent bunks in the Stone House, which was the nickname for the big old farmhouse on campus. Each week, we were sent to various camps to serve as counselors, depending on the need. I volunteered for a lot of the adventure camps, one of the only female counselors willing to do so. This meant that I spent a good part of the summer off-campus. Still, when I was on campus, I bonded with my fellow Camp Family members, and we shared much silliness and many inside jokes.

Every Wednesday night, a Camp Family tradition, we'd go to the local Dairy Queen for a "DQ Run." One of the favorite items: the Dilly Bars, both because they're delicious and because it's a ridiculous, slightly naughty-sounding name. It was also close to the word "tilly," which was our name for the secret friends we had all summer long. I think this was the camp director's idea: we would draw names and then, for that week, did secret nice things for our "tilly." This could be anything from leaving them anonymous notes to making them special things in the craft center.

It was the summer of Batman. The movie was big that year, and we saw it in a theater in nearby Lewistown. At every camp, there was at least one Batman, a boy who refused to change his Batman T-shirt all week long. We Camp Family members enjoyed dancing to "Batdance" from the movie soundtrack, which one of us owned, and we made bat-shaped chocolate cookies (along with peace signs, courtesy of me, the hippie). 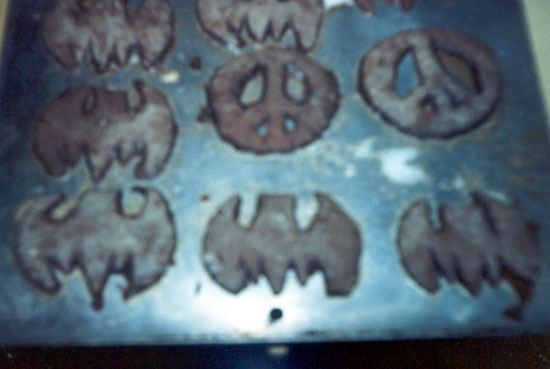 Our group time was limited to Saturday afternoon and evening, after one group of campers left from, to Sunday morning when the next group arrived. We sure packed a lot of bonding into those few spare hours. The camp chaplain, who was just a few years older than us and also stayed in the Stone House, had a Milli Vanilli album we liked to play, the guys acting out different parts of "Girl You Know It's True," "Blame it on the Rain" and "Baby, Don't Forget My Number."

Later, when I learned Milli Vanilli been a sham, it hit me as a personal sort of betrayal. Then I had to laugh, because of all the times we'd lip-synched to their songs, not realizing the irony. We also loved the Fine Young Cannibals, "She Drives Me Crazy," as I remember.

There were so many good times, so many good memories. We wrote to each other for years, but somehow, the correspondence eventually dried up. I'm happy to say that after all those years, I found one of my fellow Camp Family members on Facebook. I promised to share some photos, so I thought this would be a great topic for this week's Memory Box.

Here are some photos from that summer. I had a camera but didn't take many pics (don't ask me why). We're wearing our staff shirts in a lot of these, because we were about to attend the Penn Central Conference, which is a big annual meeting for the United Church of Christ. Obviously, I'm not in them because I was taking them! The woman with the turquoise capri pants, eating an apple, was the Nature Director. For some reason, I don't have any pics of the Arts and Crafts Director. 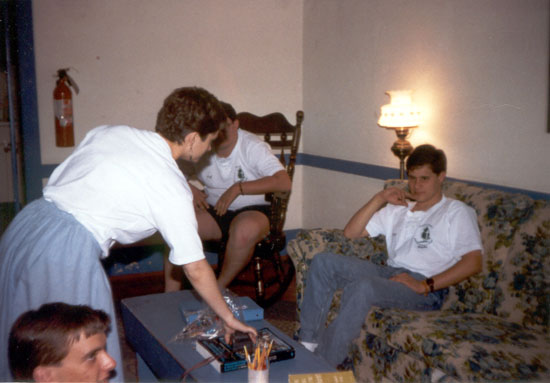 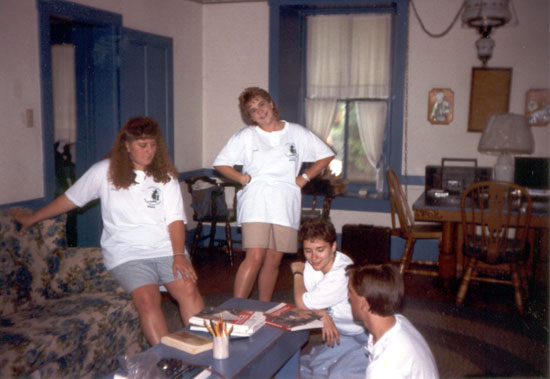 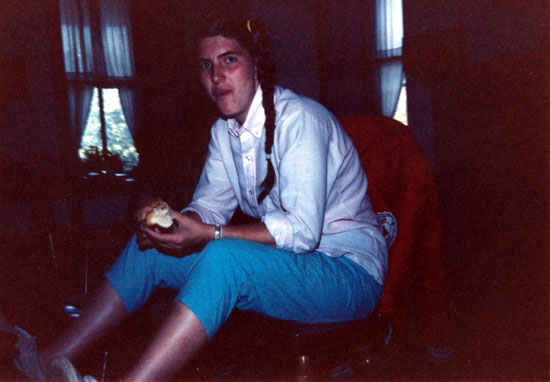 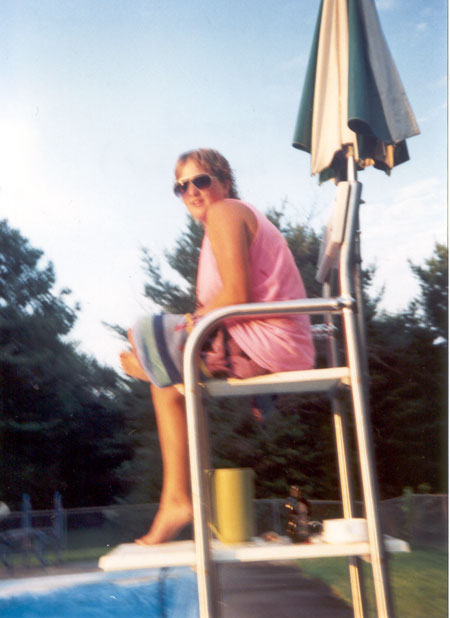 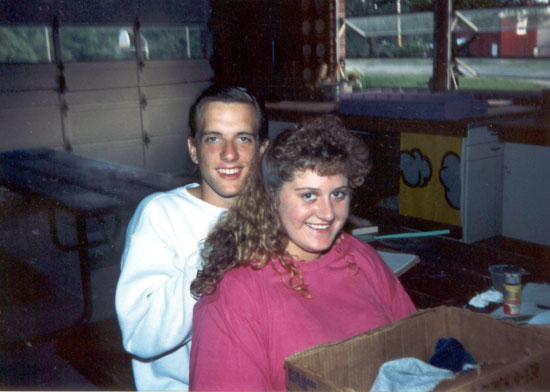 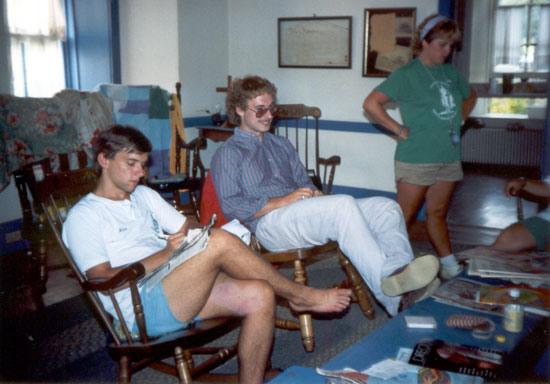 I kept a journal that summer in a three-ring binder which has, appropriately, a Batman sticker on the front, and a "Smile, God Loves You" sticker on the edge. Paging through it this morning, I was reminded of all the happy times. We really were a sort of family, making each other smile, sharing secrets, and telling each other, frequently, that we loved each other. While there was at least one confirmed couple throughout the summer, most of the relationships were close but platonic.

Here's an example of the sort of silliness I'm talking about. This is from my June 9 entry. We were on the way to another church camp, Fernbrook, to engage in a weekend training session. By the way, we were not from Pittsburgh.

It all started while I was asleep, when a white car full of bizarre-looking women pulled alongside us and Tim [the chaplain] raised his eyebrows in greeting. Just as I woke up, he was playing tag with them by passing them and then letting them pass us. Jeff [a counselor] reported that they'd given us the 'V' salute. Whoah! Of course, Tim didn't know what that meant or what they wanted. When they saw us laughing in the car, they got paranoid, and the driver shook her fist at us. Mark [a counselor] made a sign that said, "WE'RE FROM PITTSBURGH. WHERE ARE YOU FROM?" and Jeff held it up the next time we passed them. They felt better than, and when they turned off, they blew us a kiss.

Now we passed Denise's [a counselor] car, where everyone else was. We held up the sign for them. When they passed us, they held up one that said, "NO HABLO INGLES." Then we passed holding up another one: "WE'RE GOING TO CAMP FERNBROOK." They wrote back, asking for directions, and we replied, "WHAT A COINCIDENCE. WE'RE LOST, TOO."

Next time, they asked if we could spare some paper. First, we tried passing it through on my side, but I threw it and missed. Then, they drove up on our left, and Mark and Jodie [the lifeguard] leaned out the back windows and passed paper through. [NOTE: Do not try this at home.]

They wrote, "SEEN ANY HOT MEN?"

I could shares dozens of similar moments, but I'll just share one more, this from June 14, because it's so indicative of how we interacted. Instead of writing personal letters to our friends and family, we would all join forces and write composite letters to them, each chipping in a little bit.

Back in the Stonehouse, and I owe Jeff a million dollars. I gave him a pen to use to write a composite letter to Mike Lamprinos [a high school classmate of mine], and he picked up a similar pen. I bet him a million dollars that pen was mine, and then he found mine.

We were fierce friends, and we had each other's backs. Amongst the silliness, the harmless flirtation, we also helped each other deal with homesick campers, rogue camp directors (each camp had a volunteer director in charge; and some of them weren't great), accidents, and emotional hardships.

After one last weekend together, at the end of the summer once the campers were all gone, I wrote this on August 13, 1989.

This morning was an anticlimax, an afterglow, an aftermath. One by one, we quietly slipped out amid flurries of hugs and luggage. Rebecca and I left at about 9, for a ride home drenched with sun and talk. I dropped her off at Maison Blanche, curiously enough the same place where Chris & Sydnee [who were apparently friends of mine, though their names don't ring a bell] had their apartment. She hugged me good-bye and told me she loved me.

That wouldn't be the last time we saw each other. We got together that winter for a reunion at the camp, although as I remember, one or two people couldn't make it. I carried on a correspondence with my fellow counselors for years, and Mark and Jeff came back the next summer to serve as Camp Family again.

I didn't go back to camp after that. If you ask me why, I can't really say. Maybe because I'd finally achieved my goal of being a fun, compassionate counselor. Maybe because I had found new things (like college radio and the Penn State Monty Python Society) to occupy me. Or maybe because somehow I knew that nothing could top that special summer.