As regular readers know, I like to share items that I find while walking my doggie, Una. Today's item is a photo of two friends, from an indeterminate time (although the hairstyle of the woman on the left looks very '80s). They're on a basketball court in an unidentified suburban area, probably somewhere near Philly, though I don't recognize the specific court. 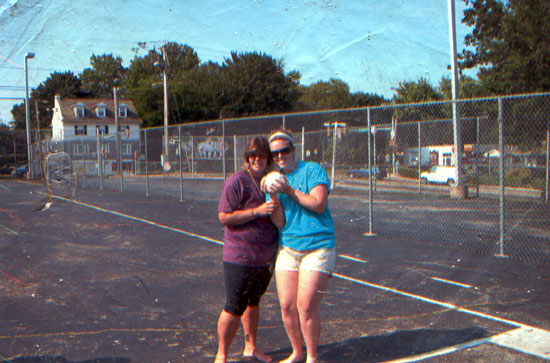 The longer I look at it, the less I am sure. I'm thinking now that it must be a small white ball, although why they'd be posing with it, I have no idea. Perhaps these three friends took a child's ball with them to a nearby basketball court, where they were messing around when one of them pulled out a camera.

As is usually the case with found photos, there is nothing on the back. The bottom left corner is blacked in with a marker, but if that was intended to obliterate something, it did its job: I can't read anything.

I like to think that it really was a snowball, stowed away in someone's freezer until the weather was warm. The three friends roamed the streets, looking for a target. But nobody seemed worth this out-of-season snowball, the result of such careful planning. So they posed for this picture and then, laughing maniacally, tossed it back and forth until it split apart into fragments of cool, slippery ice, melting within minutes in the hot suburban sun.

Moral:
Out-of-context photos can be bewildering.