I've written poetry almost as long as I've been capable of holding a pen. For this I credit my fantastic second-grade English teacher, Mrs. Johnnie Stahl, who taught us poetry fundamentals and had us write poems in her class.

My earliest poems were all metered and rhyming, typically sticking primarily to tetrameter with A-A-B-B rhyme scheme.

By the time I was in high school, I had begun experimenting with free verse, which I felt offered me more options for expression. In today's Memory Box, I'll share some of those early efforts. 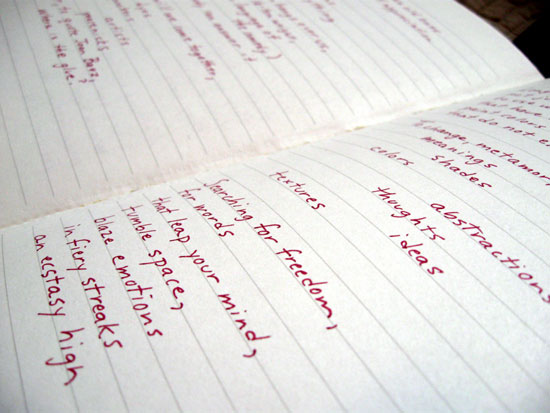 A close-up of the poem "The Writer's Quest"

I was an avid reader of poetry, and among my favorite poets at the time were Emily Dickinson and Rod McKuen, in part because I'd seen him read at Chautauqua, New York, on a family vacation. I loved Emily for her playfulness and her creative use of language, and I loved Rod for his thoughtfulness and simplicity. In my poems, I tried to borrow elements from both: Rod's deep thoughts and short lines; Emily's use of metaphor and penchant for hidden meanings.

Some of my poems jumped full-fledged from my brain, based on something I'd seen or experienced, but others started by sitting down with a thesaurus and making a list of words which I felt were relevant to the poem. I wrote primarily for myself, not worrying about making it accessible to a wider audience. Sometimes even I didn't truly understand it, because I often prized experimentation over comprehension.

I transferred my finished poems carefully in colored ink into a clothbound blank book, a habit I would continue throughout college. While I was working towards my MFA in poetry, however, I discontinued the practice, because every time I felt I had a final version of a poem, I would find a new line break or feel the need to refine a turn of phrase. Today, I view my poems as open-ended, like Walt Whitman, making revisions to them over time. A good poem is never finished.

One of my more successful poems from this volume combined a series of metaphors, inspired by looking at an icicle hanging from a roof. As you can see, I was prone to sentimentality and flowery language.

Drips onto a glistening
bed of fairy dust,
white gold in the
afternoon sun

Resembles a garden hose
or an elbow
overflowing with
freezing water

An elf smile
hung from a roof,
clearest thoughts
suspended above winter

In another poem, I attempted to create a meditative feel, based on observations of the natural world. I also experimented with unusual diction as I tried to capture how things looked from my perspective. As with many of my early poems, it could have benefited from some trimming, to focus on the stronger moments.

Afternoon sunshine
has alight in my hair;
on bed of dry grass
I linger,
held by sun warmth.

I close eyes,
become aware
of each small noise
hum of cars in faraway
jingle of dog collar
pounding of bridge workers
With sun on shoulders
I am complete body
at one with senses.

Head in hedge
I glance up tree:
birds fly sideways.

This side of street
is spring,
other side winter.

I am inside out-looking:
gold hairs glint
on exposed ankles
orange cat fur
on blue gloves.

Next, I'll share an example of one of my so-called "thesaurus poems." In this one, I also made use of humor (complete with unnecessary punch line). It's important to note in this poem, in case it's not obvious, that I envisioned myself as the tempted passerby. Nowadays, I steer clear of personification of objects, which I find cloying. Then again, in this poem, I suppose that's all right.

Diabolically sweet candies,
lying so innocently
in a confectioner's window
Glistening with sugary coatings,
they utter
a mute summons,
their syrupy bodies
modestly concealed
under a red ribbon

A passerby pauses
to glance at the candies,
which lie in their boxes
and hum honeyed music
The pedestrian places
a fleshy hand
on the glass, as if
to pull the candies
through the window

Pudgy face
presses against
the window
Beads of sweat
appear on a pale brow,
blubbery arms
quiver with restraint

With a desperate effort
the tempted one
wrenches away
from the window,
pushes away from
the gleaming glass
With a longing look
at a butterscotch nougat
the pedestrian departs

The glass
faintly glimmers,
already smeared
with human oil
from many passersby

Guilty of an
accursed crime;
to display
candy
in public

Some of my poems were inherently political, with favorite topics being peace, love, and understanding, as well as a critique of consumer culture. See if you can tell the subject of this next poem, which mimics the meter of "Twinkle Twinkle Little Star," although with willfully unusual line breaks. I've included a link that will explain the more obscure reference in this exercise in absurdity.


Since I was, after all, a teenager, some of the poems were filled with angst. I assure you, this poem is all about the drama and is not based on reality. Later, for a comedy show on college radio, I created an angst-ridden poet named Berlin St. Croix, a.k.a. Black Death, who wrote very similar poems (although hers were, of course, funnier).

Despair chilled me
with its icy breath
and ran its cold fingers
down my back
I clung to it
as its voice scratched
the secrets of hopelessness;
the imperfect words
that fed my poverty

It dragged me down
on my lumpy mattress
and fanned my smoky fears
with a paper of disillusion,
all the while chiding me
for my psychotic confidence

Then, as the morning
ripped through the blackness,
Despair creaked away
over barely shadowed floor
Almost imperceptibly
it paused in the doorway;

blew a stale kiss
and assured me
it would return once more.


The poem that ends this particular volume could serve as my ars poetica, in those days. In other words, this was how I viewed poetry as a teenager, and what I wanted my poetry to do. Incidentally, rereading it today, I'd lose the last two stanzas.

Longing to create,
not just transform,
to use words
that have not been invented,
paint colors
that do not exist

Searching for freedom,
for words
that leap your mind,
tumble space,
blaze emotions
in fiery streaks
an ecstasy high

For exploding colors,
as audible as memory,
that shout mountains,
swallow time,
echo sensation
across valleys
and wide ocean

To express all this
without ever
leaving my mind

The poems that I've shared today represent some of the most accessible from this volume. Some were so deliberately obscure that I'm not sure I even understood them while I was writing them. While these poems all remained unpublished, I recycled some of my favorite lines into later poems, and one such recycled line serves as the title for my current manuscript.

Although they're not publishable as anything other than juvenilia, these poems will remain precious to me: part of my evolution as a poet, writer and thinker.

As much as you might change over the years, your key personality remains the same.