This past weekend, I traveled to Central Pennsylvania to visit my parents and celebrate both Father's Day and a belated Mother's Day. The Gryphon joined me, and we also took our doggie, Una. 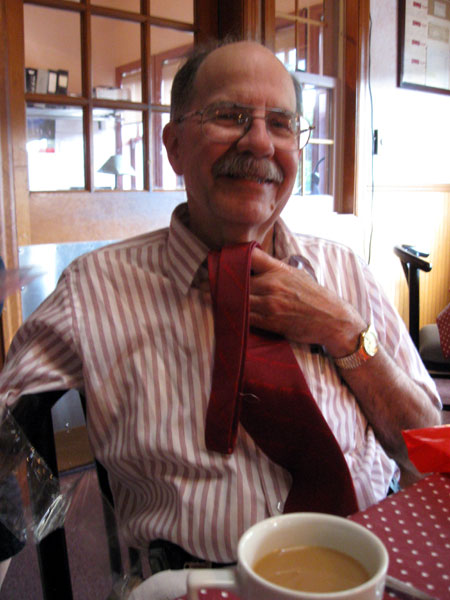 Dad with the tie from Mom
(Faster-loading version)

We arrived mid-afternoon Saturday on a day of sporadic rainshowers. Dad was waiting for us, and we talked about what to do. We decided to take him and my Mom out for dinner, so we got her on the phone and coordinated things. She suggested a restaurant in a converted railroad station, where we'd eaten before. I made reservations.

Since we had some time to kill, The Gryphon and I went with Mom on a trip to a local garden store. She was looking for miniature roses.

More rain hit while we were in the store, but eased up before we left, which was good. My mom is incapable of walking out of a garden store without buying more than she'd intended. I also made some impulse purchases from the bulk foods department: crystallized ginger, dried cherries, and roasted soy beans (yum!).

Mom dropped us back at Dad's for us to get ready, planning to meet us at the restaurant. Even though it wasn't a fancy restaurant, I changed into a dress I'd brought. I don't get to dress up often, working at home the way I do, and I like to do so when I get the opportunity. We both pulled up into the parking lot at the same time.

After placing our orders, we gave Dad his Father's Day gifts. The Gryphon and I gave him some photo albums and photo storage boxes, which I will use to help him organize his family photos. He has a drawer full of photos that came from my grandmother that need to be preserved properly and put in a viewable form. I had the best intentions of starting that this weekend, but we kept so busy I didn't get a chance. I guess I'll do that next time.

I had the halibut special, served with fresh corn and garnished with cherries. Afterwards, The Gryphon and I split a strawberry shortcake. The strawberries were fresh and ripe, and the biscuit tasty.

On the way back from the restaurant, we saw a beautiful rainbow. One of the nice things about rain. 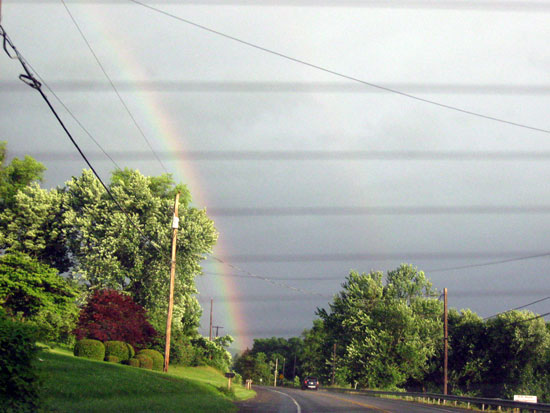 Dad had wanted to see the new Star Trek movie, but we lost track of time and missed the show time. We rented Across the Universe instead, which The Gryphon and I love and figured Dad would, also. No surprise, he did, saying it brought back memories of the '60s. I liked it just as much the second time around.

I got a great shot of Una and The Gryphon relaxing on the couch, as well as a self-portrait in Dad's large mirror. You can see family portraits in the foreground. 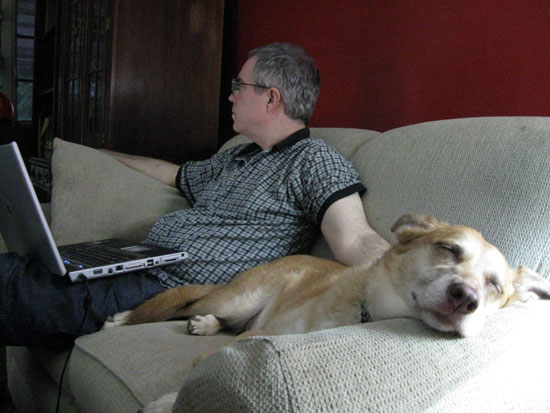 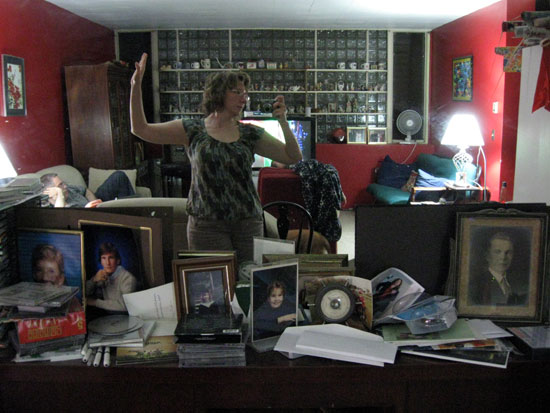 I stayed up a little later than Dad and The Gryphon, going through some poetry I'd brought with me to put together submissions for three lit mags: Poetry, Barrelhouse and Lungfull.

Moral:
It's not Father's Day without a tie.