On Saturday, my husband, The Gryphon, and I attended what's known as the Panic Meeting, or the last official Otakon meeting before the convention.

Just a warning: for the next three weeks, I'm going to be terribly busy and might fall behind on personal correspondence. Right now, I'm being inundated by e-mails related to Otakon. 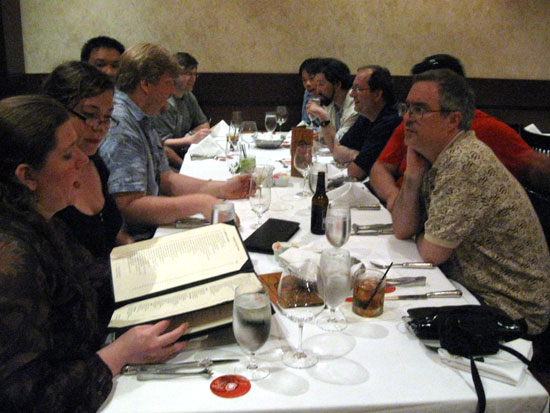 Eating at Fogo de Chao after the meeting
(Faster-loading version)

The meeting was held in Baltimore, in the Baltimore Convention Center, where the convention will be held. I assumed I'd get a chance to scope out my interview rooms, but there wasn't an official walk-through and I forget to try to get someone to show me around. I'll have to do that first thing when I arrive for the convention.

We discussed all the important topics necessary for running the convention: from logistics to scheduling. I was a little frustrated, however, that we didn't have Internet access, so I had to make notes of e-mails I needed to send to people when I got home. I suppose I could have convinced The Gryphon to let me use his new iPhone, but I didn't think of it.

I carried around a notebook during the meeting, jotting down anything that came to mind that I needed to discuss with people. I took care of as much as possible while at the meeting.

Overall, I felt really good about things by the close of the meeting.

Amusingly, I was mistaken for The Cousin again. A new staffer came up to me and called her name. This happens to me without fail every single convention, even though The Cousin has about 5 inches on me in height and is several years older (which I hope means that they think she looks young and I look tall!). I've even been asked before about my daughters (The Cousin has two teenage daughters).

Putting us side-by-side, I guess I can see why it happens. We have similar hair, similar complexions, blue eyes, and both wear glasses.

I'm the one on the right, silly

To add to the confusion, I was sitting next to my husband in the front row, and shortly after being mistaken for The Cousin, her husband, The Photographer, sat next to us. I told him this would probably only confuse people even more.

After the meeting, The Gryphon and I agreed to go to Fogo de Chao, having been invited by The Godfather, who is the head of Guest Relations and therefore the supervisor of both me and The Gryphon (who's helping to run Industry Relations).

The restaurant is a Brazilian steakhouse, which is similar to the dim sum restaurant where we ate in New York City. After filling up at the salad bar, waiters came around with different cuts of meat. They would tell us what it was and, if we wanted, give us a slice. When you're done eating, you turn a green dot at your place over to red, so they know not to ask you about anything else.

I recently began eating red meat again, so I was eager to try different cuts. It was probably the most delicious steak I've ever had. I can see how it would be easy to overdue it. The $50 a head price probably guarantees a lot of people overindulge. I would guess that the different slivers I had added up to about 4 ounces, or about what I would normally eat.

What did me in were the sides. They served a cheese bread I'm convinced was evil, and I know I ate too much fried polenta, too. If I went there again, I'd skip the cheese bread.

The last straw was the fact that The Gryphon and I split a dessert of flan. That definitely made me feel too full. All the way home, I was gassy and tired. We headed home around 9, and I had to take a half-hour nap at the first rest area, since I didn't think I could make it home. Fortunately, that did the trick.

Moral:
Don't be tempted by the cheese bread.