This Fourth of July weekend, The Gryphon and I visited my family in Central Pennsylvania. My brother came down from Vermont with his family, and my sister came up from Virginia. Sadly, her husband had to stay behind and work.

On Sunday, we spent more quality time with my family before driving home. This started out with a swim at the hotel where a friend of my brother and his wife was staying. She had driven from her home about two hours away, just to spend time with them while they were in town. 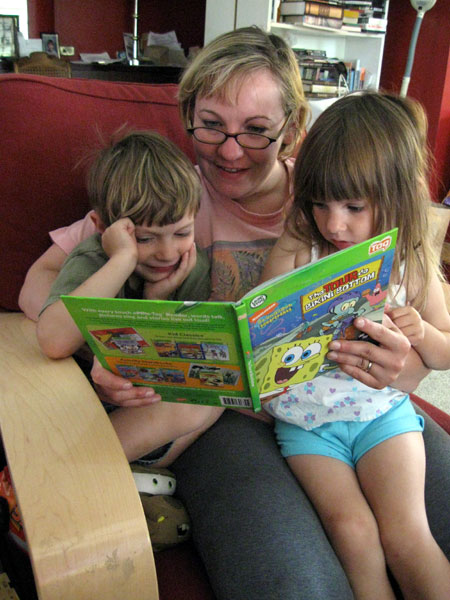 My sister reads
to my nephew and niece

Even though it wasn't the warmest day for swimming, my sister and I joined my brother and his family and their friend in the pool. The Gryphon claimed a lounge chair and relaxed while my siblings and I took the kids into the water. While it took a little adjustment, once you got in, it was very pleasant.

My sister and I took turns tending to my niece and swimming
in the deep end. She was very interested in learning to doggie paddle.
We held her in the water while she moved her arms and legs, moving her
through the water as she did so.

Since he's older, my nephew tends to be more independent. He didn't want our help with the doggie paddle, but my brother got him to practice kicking by holding onto the steps and kicking with his feet. The Gryphon got a good picture of him wrapped in a towel, laughing. 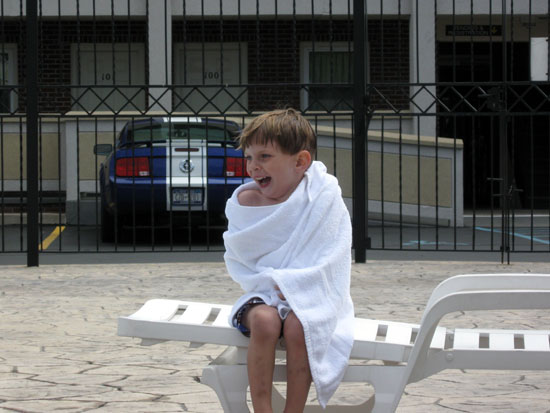 I enjoyed the opportunity to swim, since I hadn't done it in quite a while. Although I always take my swimsuit with me to Otakon, I rarely get a chance to hop in the pool.

When the kids got cold, we wrapped them in towels and gave them peanut butter and jelly sandwiches my brother had brought for them. Not long afterwards, we changed in the hotel room and headed back. My sister, The Gryphon and I stopped in a convenience store for them to buy sandwiches. I had one waiting for me at home: half of the sandwich I'd bought from Original Italian Pizza on Friday night. I also had carrots, celery and yogurt bought at the convenience store.

My dad sat down with my niece while the rest of the people were eating, and colored with her in a coloring book about sea life. 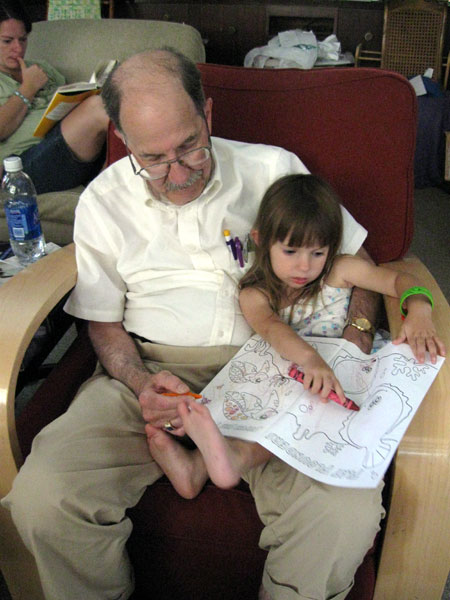 After we ate, I watched The Tale of Despereaux with my sister and nephew. I'd rented it from Blockbuster in the off chance people would want to watch it. My sister and I hadn't seen it, and while my nephew had, he was happy to watch it again. He even watched it all the way through, which just shows that his attention span has been improving since he was little. My niece, brother and his wife took naps while we watched.

When the video ended, I helped my sister pack up. She had a longer trip than The Gryphon and me, so she wanted to get going. I stayed downstairs, then, and took a nap in the front office on the couch, with my doggie Una.

Shortly after we awoke, we learned Mom was coming over soon, so I took Una for a walk, telling them to call me when she had arrived and was settled in. That way Una wouldn't get excited and bark, scaring my nephew.

As we walked around town, I got a couple good shots of Una, near a mural that's in progress downtown. 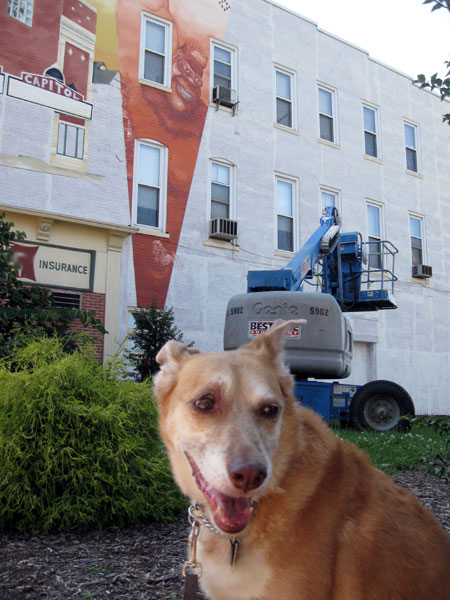 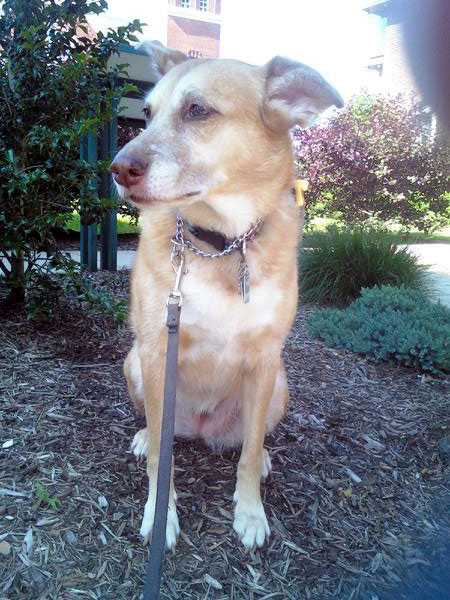 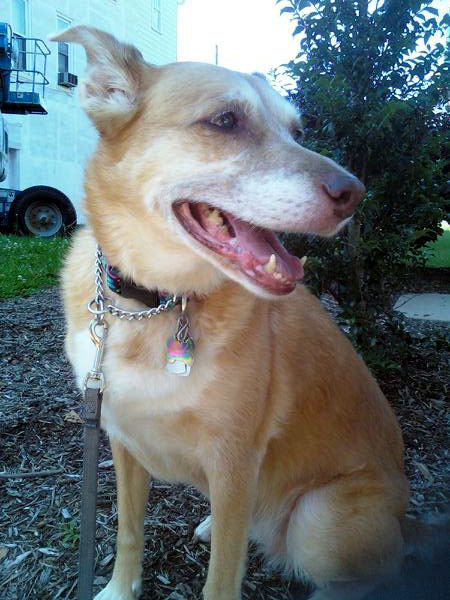 By the time we returned, Mom was fixing dinner. She made a casserole containing hamburger, kidney beans, cheese and onions, served with a salad that primarily came from her home garden. There were also cherries and grapes, provided by the friend of my brother and his wife. Dessert was a low-fat cheesecake, which reminded me more of a cream pie or a mousse. Instead of a crust, it was served on a bed of graham cracker crumbs. I thought it was delicious and asked Mom to send me the recipe.

Even though it was a crowded room with lots of people talking at once, and even though The Gryphon and I sat at a side table, where my attention was focused on making sure Una behaved, it was nice to spend one last moment with everyone.

Una was pretty relaxed as we loaded the car, maybe because she hadn't figured out what we were doing. Often, she starts barking, which I really didn't want. As expected, though, she dug in her paws when we tried to get her to leave. She wanted to stay with everybody. The Gryphon had a stroke of genius and asked her, "Do you want to see Lukie?" Una loves our kitty, Luke, and she immediately popped up and followed us out the door.

We gave everyone hugs, loaded the car, and took off. The trip home went smoothly, despite the holiday traffic. The nap had done its trick: I was alert for the trip. I took a camera-phone picture at a rest stop on I-80 of some sun through the trees. 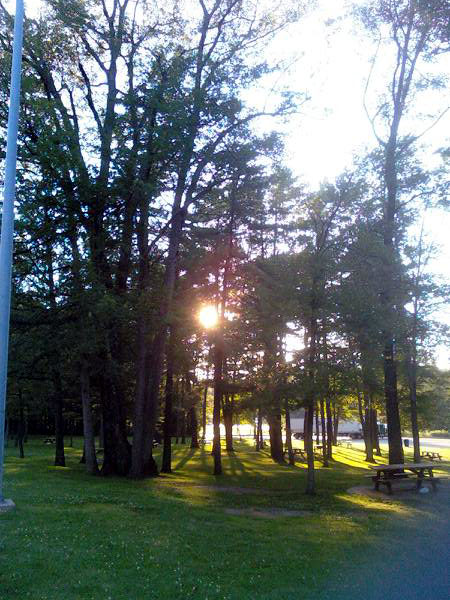 All in all, this was one of the best holiday weekends I've ever spent with my family.

Moral:
Cooperation and compromise make for a pleasant weekend.