Into the Deep End

This was my first year as a department head at Otakon, so The Gryphon and I arrived early. That way I could be prepared to handle anything that came up. We arrived Wednesday evening, after I'd spent a day of organizing things at home. 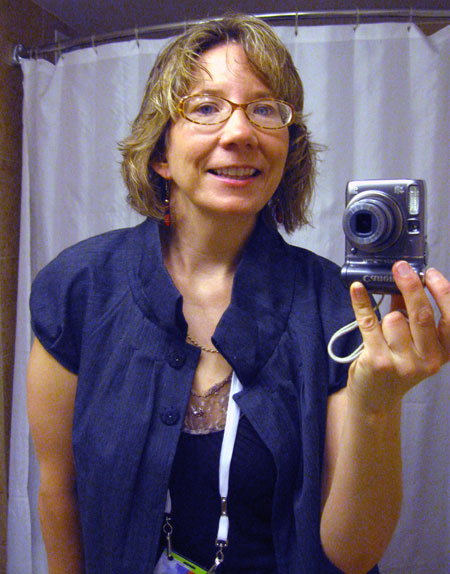 Me on Thursday morning

I was staying in the Sheraton, in a room that was connected to the room that would be used as an interview room. There was some confusion, though, about the keying, and I had to go back and forth a couple times to the desk before I was given a key that could open all three rooms that made up the suite.

We met up with our boss, then, The Godfather. The Gryphon was working in Industry Relations, and both of us answered to The Godfather, who was the head of Guest Relations. We met at the so-called Battle Bridge, the suite where the Guest Relations staff met for off-site meetings and to relax after a long day.

The Godfather had a number of things for me, including the bins that belonged to Press Operations, a corkboard/dry erase board, and some PVC pipe and cloth that could be used to provide a backdrop for photos for one of the guests.

I asked The Dormouse, who happened to be walking along with me, if he would help me get that gear back to the room at the Sheraton, and he agreed. Once we got the stuff moved, we walked over to the Press Ops to see if the computers I'd ordered had been delivered. They had and were operational, but the room door was open. I wasn't certain if the technical people still needed access to everything, so I didn't ask about picking up the Press Ops key. Without the key, I didn't want to deliver anything else that night. If I had it to do over again, I probably would have figured out if that were possible, because anything we could have done Wednesday would have made it easier on Thursday.

That night, I attended a meeting in the Battle Bridge and probably should have obtained a phone list at that time of everyone in Guest Relations. It would have saved me some running around, but I didn't realize such a list was available.

I returned to my room, then, and put together a "to-do" list for the next day, as well as checking up on some last-minute e-mail from registered press and from my Press Relations staffers.

Thursday, I had arranged for my lieutenant, The News Producer, to meet me at the Sheraton. We looked at the suite and put together a diagram of how the furniture should be moved to facilitate interviews. But we decided it could wait until tomorrow, because we didn't need the room until then. 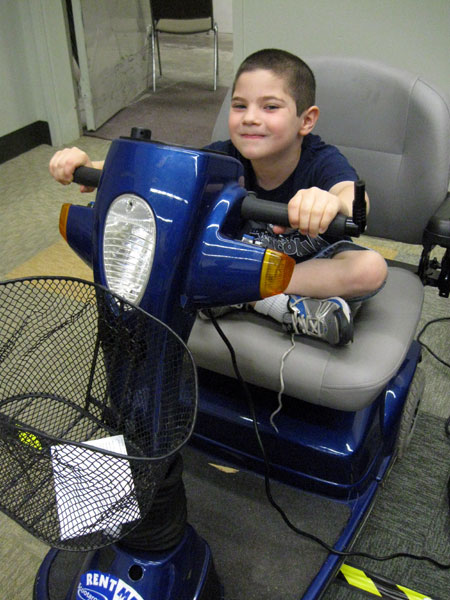 The son of The Scrapbooker and The Laughing Man
sits on a scooter and pretends to drive it. 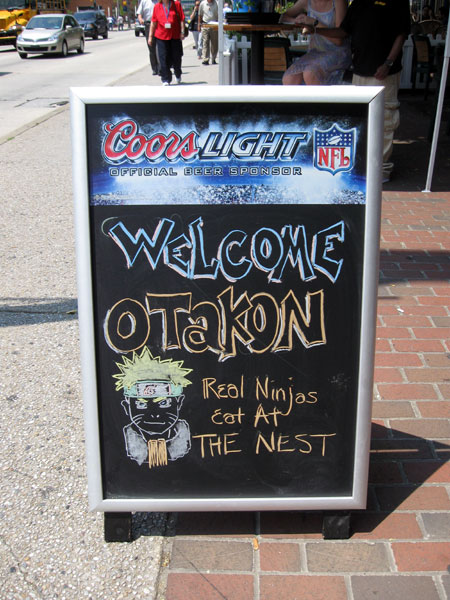 The Nest, across from the BCC, had a sign reading,
"Welcome Otakon: Real Ninjas eat at The Nest." 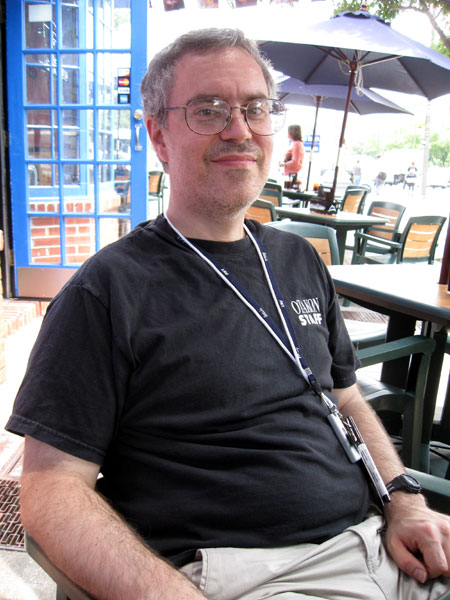 The Gryphon on our lunch break 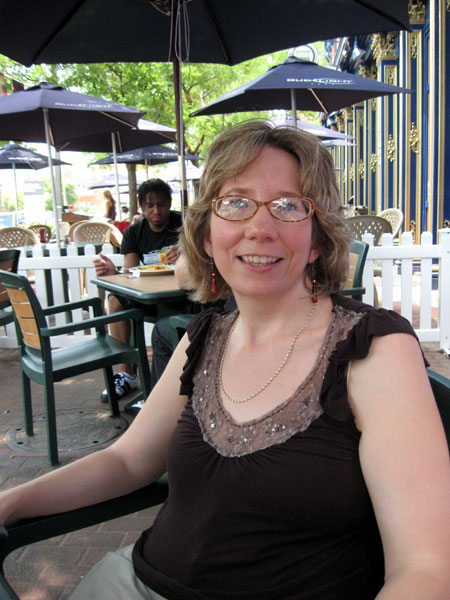 I take a lunch break.

I was pretty stressed that first day, trying to keep my brain focused, working from a "to-do" list I'd written in my notebook. Fortunately, everything that was supposed to arrive did, unlike previous years. But we did have some unanticipated troubles, like having to purchase more ink for the printer (which ran out almost immediately upon beginning to use it) and finding a solution to the fact that I had not ordered enough press ribbons for the members of press. Little did I know that, because of no-shows, we would have exactly enough for the weekend, with a few left over! 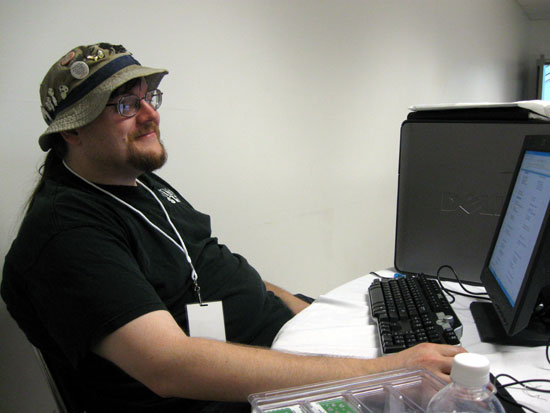 At his station at the computer, The Gamer
looks relaxed and ready for business. 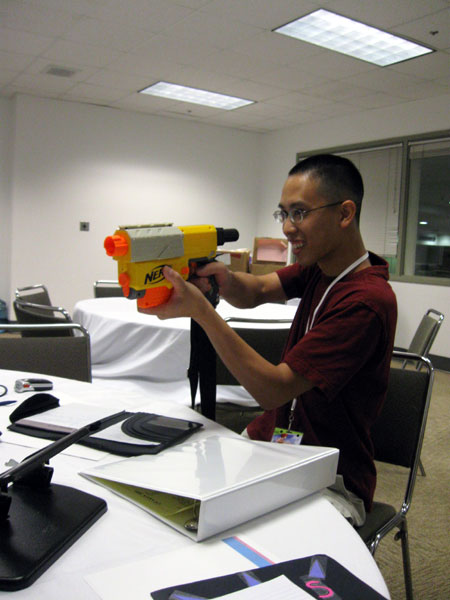 The News Producer with a Nerf gun.

While I had hoped we'd be done by noon, The News Producer and I, even with the help of The Gamer, once he arrived, did not finish until shortly before the all-staff meeting in the Pratt Street Lobby. That's where we heard a pep talk from the president and posed for a group picture before returning to press to deal with the onslaught of press. 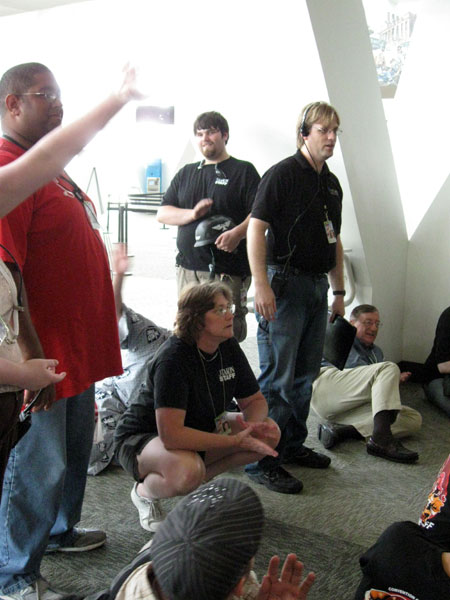 Our fearless president (wearing the headset),
still known by his nickname, The Minion.
Next to him, crouching, is The Cousin, the chief of staff. 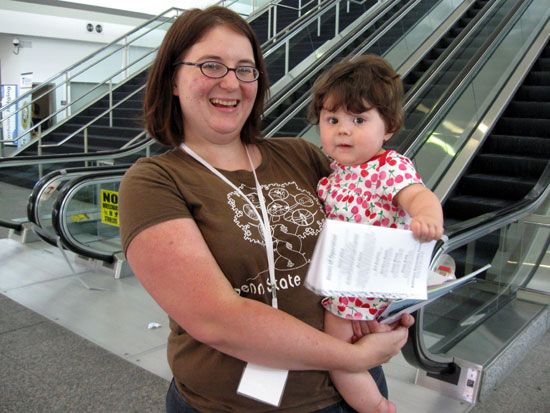 The head of Publications with her adorable baby,
who's clutching a pocket guide.

I'm proud of how my team performed that first night, despite the fact that I was feeling a little overwhelmed. I delivered the press orientation at 7, telling them some important points and taking questions. Then, after a few more directions to my staff (including Quack and The Rock Chick, who arrived just before I left), I headed to the Sheraton to change for the guest dinner and meet-and-greet.

In the past, the head of Press Relations had done exactly the same thing: delivered an orientation at about 7 and then headed to the guest dinner. However, this year, instead of being held at a private residence, it was at a steakhouse. Almost nobody was still there when I arrived! Next year, I'll have my lieutenant give the press orientation.

I did get a chance to meet voice actors Mike McFarland, Tony Oliver, and Travis Willingham, and we exchanged contact information so that I could be in touch with them about scheduling interviews. I followed some people, including The Gryphon, back to The Battle Bridge and touched base with a few people I hoped would be able to help me get some further information. 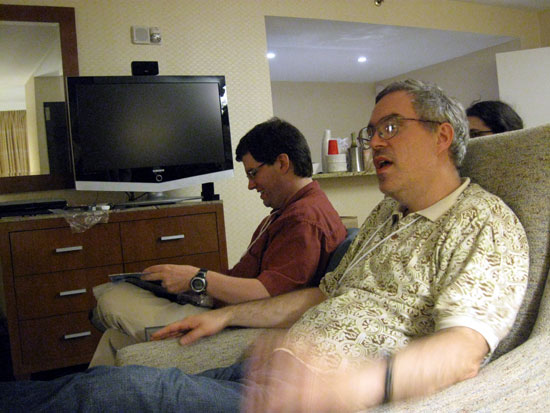 The Gryphon makes a point during a conversation.

At Otakon, at least for the time I've been in Press Relations, we arrange all media interviews for our registered press. We do it this way so that the guests aren't beset everywhere they go by interview requests. It's also done this way because we control access to the rooms where guests and the press can conduct interviews. We keep a master schedule and try to stagger interviews as much as possible.

Back in my room that night, I tossed and turned. I woke up at 3 in the morning with ideas going through my head, so I wrote them all done. By the time I finished, I had put together some good ideas for how to adjust things in my department so that we could work better together. The most important thing to remember: I had to delegate the work so that I could be the one organizing, scheduling and seeing the big picture. I didn't know it then, but that insight would help turn our department into a well-oiled machine.

Listening to soothing music on my iPod, I finally managed to fall asleep.

Moral:
If you're the boss, be the boss; let your staff do the work.