When we last left our heroine (me!), I had tossed and turned, trying to figure out a better way to run my department at Otakon. For the first time, I was a department head, running Press Relations. 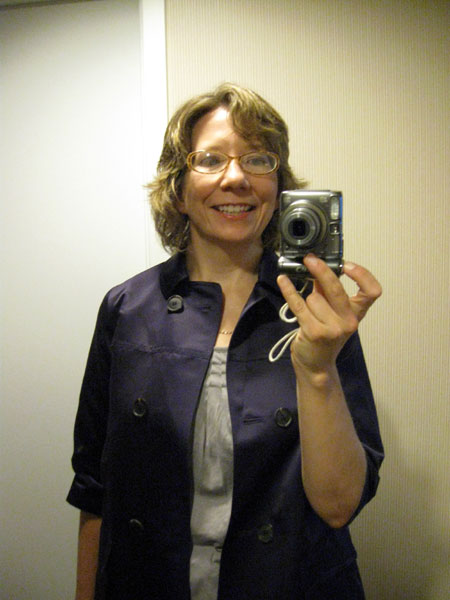 Me on Friday morning

The late-night thinking had helped. Even though my eyes were bleary, I had a plan and felt good about it. The most important revelation that occurred to me in the wee hours of morning: I had a staff, a good staff, and I just had to use them.

So when I ate breakfast in the Staff Suite that morning and ran into our chief of staff, Cousin Sue, I told her about my revelation. She added another important point: "Have fun. If it's not fun, it's not worth doing."

I would be indebted to my staff throughout the weekend for finding little ways to make me laugh and to lighten the mood.

Last year, several of us had worked together in Press Relations, namely my lieutenant, The News Producer, as well as his cousin, Quack, and second-year Otakon staffer The Rock Chick. New this year were The Gamer, who's an old friend and had served many different roles in Otakon, including logistics; and an Otakon staffer I'd never nicknamed before. I think I'll call him the Music Geek, which I base on his love of music, as well as his ability to play several instruments, not to mention his proficiency in computers and his love of several different fandoms. Hopefully, he won't object to this nickname, but if he does, as I do with anyone, I'll change it!

I don't have too much time to write this up today, so I'm going to tell the story mostly in pictures. If other things occur to me that I want to add later, I'll put it in a separate entry.

If we'd had any questions about what the first part of the day would be like, that was resolved when we saw the crowds outside. Our first part of the day would primarily involve registering members of the press and helping them with their questions. We were also trying to follow up on the many interview requests we'd received, many of which I could not schedule before the convention (although I did manage to schedule all of the musical guests ahead of time, something that was not done either of the previous two years I'd worked in the department). 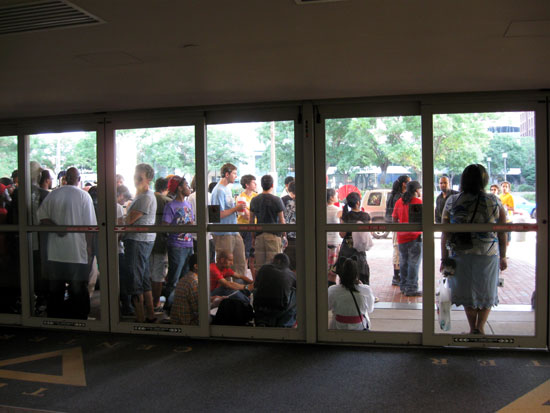 As I walked to Press Ops Friday morning,
I saw a throng of members standing outside. 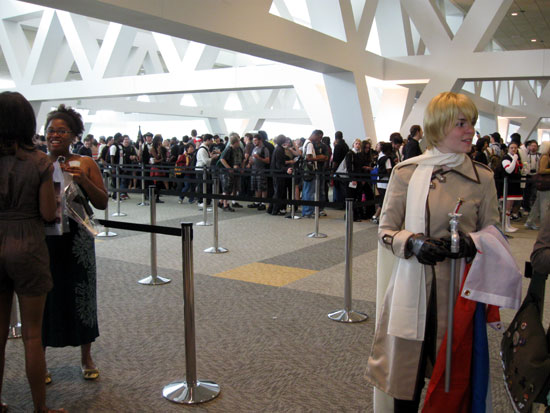 The registration line on Friday morning consisted
of hundreds of people inside the Pratt Street Lobby.

As requested, my staff was very proactive, at my direction. The Gamer handled registration and acted as our receptionist, being the first person who would take a concern and figure out what to do with it. But if he was busy with someone and another staffer was the first to deal with someone, they heard the concern and decided whether it needed the attention of either me or The News Producer. I had also made it clear that when I was not in the room, the News Producer was in charge. He was capable of handling most high-level decisions if I was not around, but he did call me when he needed guidance.

For my part, I was checking in with my staff at press events, making certain that things were going well. Since I had been the one interacting with the guests and their handlers in order to arrange interviews, whenever possible, I tried to be present to greet them in person and introduce them to whichever staffer was going to facilitate the interview or press conference.

Thanks to a brilliant suggestion from Quack, we were all operating from Google Docs, so that we could mark things as done on the "to do" list, update interview schedules with new information, or consult the list of registered press for contact information or other information. Except for high-level decisions and scheduling, which were reserved for me and The News Producer, when something needed to be done, whoever was available could do it. And because we were keeping track of things in the same virtual files, we all knew what had been done, what had changed, and what needed to be done.

I was extremely happy with how well my staff functioned together. At many times, it was like we were a group brain. We even made jokes to that effect, calling ourselves The Borg, an in-joke that had first come up the previous year in Press Ops.

It was great, though, that when somebody realized something, like, "Hey, it's lunch time! We need lunch!" that instead of waiting around for me or The News Producer to order them to, they would say, "I'm going to go pick up our lunches. Who wants me to get them something?"

And believe it or not, for the first time ever in my Otakon experience, I really was too busy to think about food. I don't know what I would have done if the Rock Chick hadn't seen that I got fed! This was such a problem that for my "to do" list on Saturday, I wrote, in all caps, "EAT!" (much to the amusement of my staff).

Our big event of the day was a press conference with VAMPS, a new band including Hyde from L'Arc~en~Ciel, a popular band that had performed at Otakon several years ago. While the band was not an official Otakon guest, since they were playing in Baltimore on Thursday night, The Godfather (head of Guest Relations) had worked out an agreement with them that they stop by Otakon and do a panel and autograph session. In exchange, they gave registered Otakon members priority to their show, and Otakon gave ticket holders for their concert priority seating at the Friday panel.

I had also been in touch with the band's management and scheduled a press conference Friday. We made sure that the press knew to be there early so that they could be seated in time for VAMPS to arrive. And then we all waited, since the band's panel was running over.

In the meantime, I chatted with the Spec Ops staff who had been sent to escort the band, if needed. We weren't sure if word would leak out about the press conference and a flash mob would form, so we wanted to be sure. 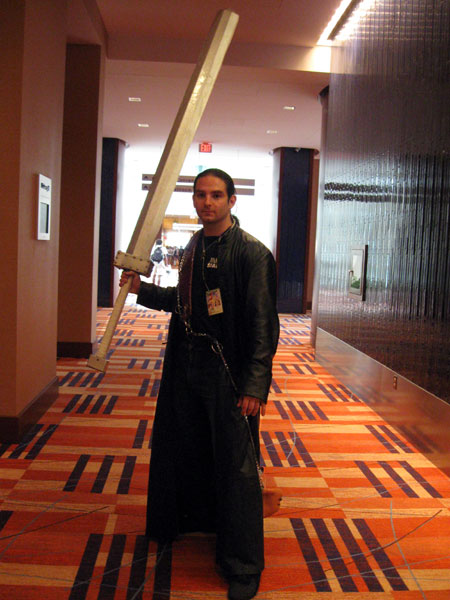 The owner of the legendary sword,
seen in many staff photos over the years. 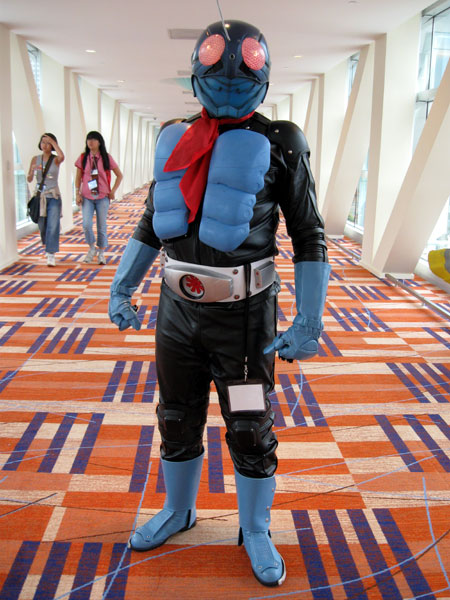 Returning to the Hilton, this brightly-colored
costume caught my attention.

After I knew that the VAMPS press conference was going smoothly and under the control of the Rock Chick, I stopped in at Press Ops and grabbed Quack, who came with me to the Sheraton Press Suite to set up for an internal interview Sony was going to conduct with Becca, one of the Sunday musical acts.

While he headed upstairs, I stopped at the front desk and requested housekeeping staff to help us rearrange the furniture. Then, working from the diagram that The News Producer and I had planned out on Thursday, we put together the room, setting the two armless chairs at one end in front of a painting, on the wall that looked more homey and would be good for photos. We moved a couch to the far end of the room, where other people could sit, and there was a glass table, which could be used for holding equipment or laptops in the middle of the room, plus a lot of extra table chairs that could be moved anywhere.

Sony was happy with the layout, and while they bustled about getting things together, I brought some cold water out for Becca and her mother, who was traveling with her. Then I told them I would be doing work from the other room if they needed me.

Thanks to Quack's Google Docs idea, I could check the progress of the "to do" list, add new items, follow up on some that I could do myself, and do other work from my room. I did have to pay for Internet for the second time, so hopefully, I can get reimbursed for that.

At the very end of the session, Quack had managed to share his web cam with me, so I got a glimpse of the Press Ops room, where the Music Geek had arrived. Meanwhile, my friend The Water Ballerina had texted me about dinner, and I told her to meet me at the close of the interview session, along with my husband, The Gryphon. After Sony put away their gear, I closed up the room and joined them on a brief jaunt to the Inner Harbor to get some sushi at Edo Sushi . 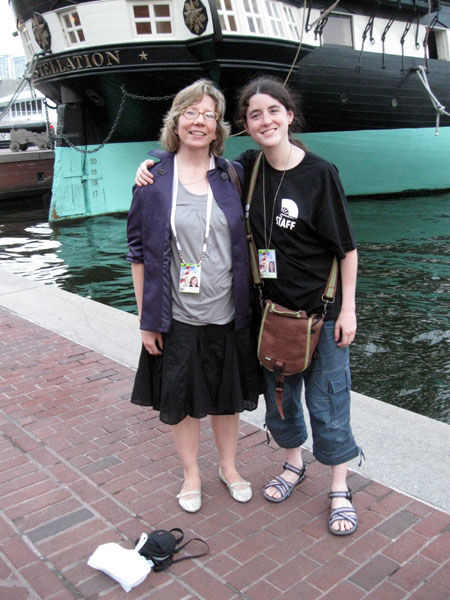 Me and the Water Ballerina in front of a ship
in the Inner Harbor after eating sushi at Edo.

Immediately after dinner, The Gryphon had to rush back to the BCC to take care of some business for Industry. I was in the unusual position of having a little spare time, so The Water Ballerina headed over to Hall D to see the MELL concert. She was the Friday night musical act.

We both really liked her music. It was a blend of different styles, with some of her songs being more progressive hard rock, others being pop, and still others electropop. The technopop songs reminded The Water Ballerina of Yellow Magic Orchestra. She said she'll definitely be buying some of her music.

She liked it so much that she downloaded a virtual lighter on her iPhone to hold up during the encore. During the encore, I fielded three Press Relations calls, so I opted to stay upstairs and text The Water Ballerina to let her know I was up there.

We had planned to see a fan parody next in Video 1, but sadly, my Press Relations Otaphone died. I didn't have any idea if anything important was going to come through, so I returned to my room to charge it.

I did go downstairs briefly, once The Gryphon was done, to join him and a couple others for a drink, but then I headed to my room to get caught up on my sleep. This time, there was no tossing and turning.

Moral:
Your body's natural instinct is to float; start moving your arms, and you'll swim.