Saturday morning at Otakon, I was feeling refreshed, having had some precious sleep. I'm glad, though, that I spent some time the previous evening putting together a list of things to do and finalizing the schedule for Saturday, because unanticipated problems would interfere. 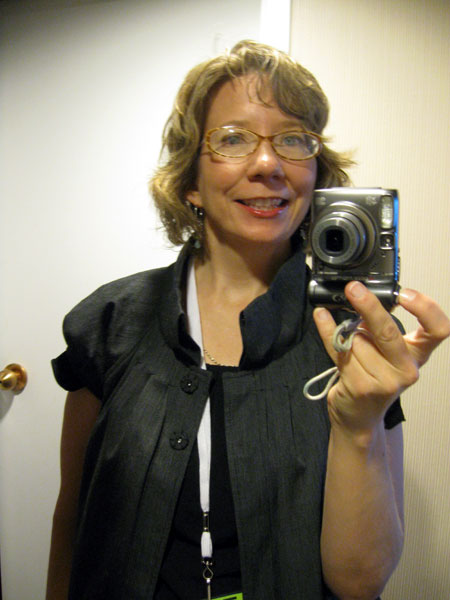 Me on Saturday morning

Usually, if something is going to go wrong, Saturday is the day it will happen. There are the largest number of members present, the largest number of events scheduled, and both members and staff are feeling the effects of too little sleep, too little food, and the bodily toll of walking the length of the Baltimore Convention Center in midsummer heat.

Throughout the course of the day, I would walk the length of the BCC, plus the added distance to either the Hilton or the Sheraton, at least four or five times, round trip, not to mention the little jaunts in between. Wish I'd been wearing a pedometer to see how far I walked!

For a brief period in the morning, while I was assigning tasks for the day and while we were preparing notes for the morning press briefing, we were all together, refreshed and relaxed. At that point, we handed the camera over to one of the reporters present (Justin from Associated Press, as I remember), and he took some pics of us. I also got a nice shot of the Kingdom Hearts Insider folks, who were cosplaying that day. 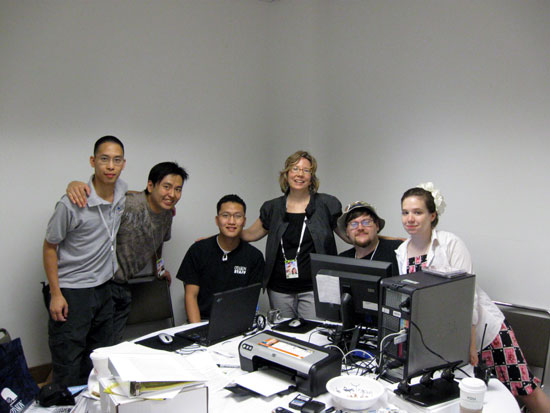 From left, The News Producer, The Music Geek,
Quack, me, The Gamer and The Rock Chick
at our base of operations in Press Ops on Saturday morning. 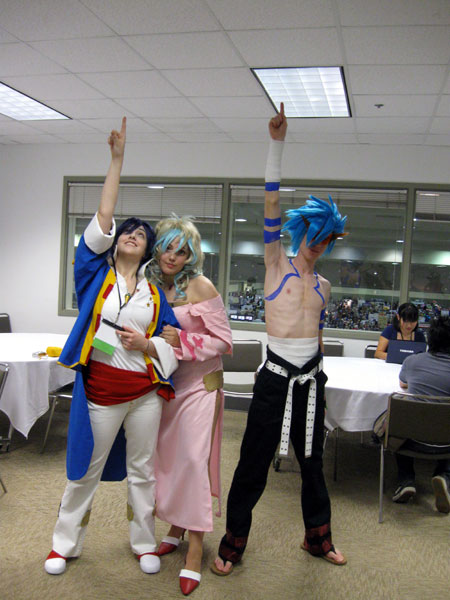 Some press organizations were cosplaying between interviews,
such as this group from Kingdom Hearts Insider.

Just before the press briefing was to take place, I got called away to deal with a legal issue. This issue took some time to resolve, and periodically throughout the day, I had to meet with other Otakon officers to deal with it. Fortunately, my lieutenant, The News Producer, did a good job of handling things in my absence. Once more, my staff functioned as if with one brain, filling in where needed, making sure work got done.

Fortunately, things timed out so that I was still able to check in on most of the day's major press events, such as a morning press conference with MELL, a late morning interview bloc with Becca, an afternoon round robin interview with Naomi Tamura, and evening interview blocs with Becca and Kanon Wakeshima. I checked in to make sure that things got going smoothly, to iron out any problems that came up, and to check on whether my staff needed anything. As soon as things were going smoothly, I left them in charge, with instructions to call me or The News Producer if they needed assistance.

For his part, The News Producer was checking in with me when issues came to his attention for which he needed direction. He was good about following through after I made rulings on things, which was a great help. Especially, as I said, because of some of the meetings I had to attend, when I was unavailable.

I still found a few quiet moments when I could take some pictures. 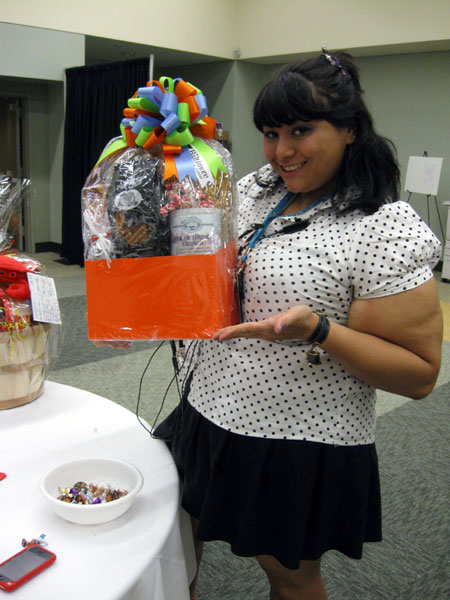 Mistress Chimera shows off a gift basket in Con Ops. 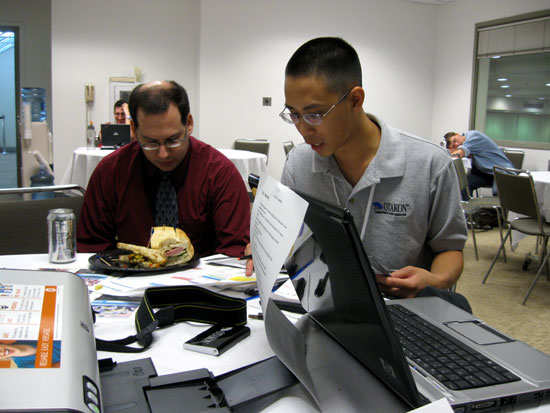 The News Producer (right) helps John Lentini
of Anime on Location to schedule some interview requests. 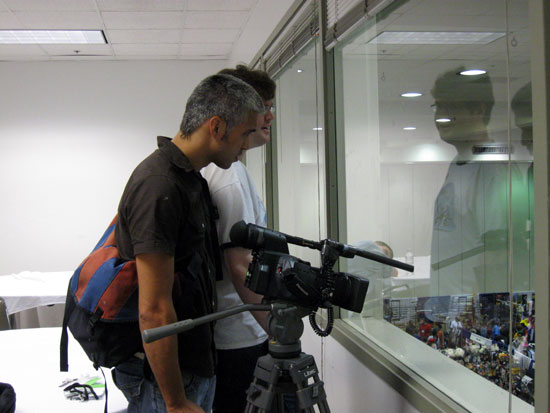 Stephen Walker (in white) of Kawaii Films
confers with his camera person in Press Ops. 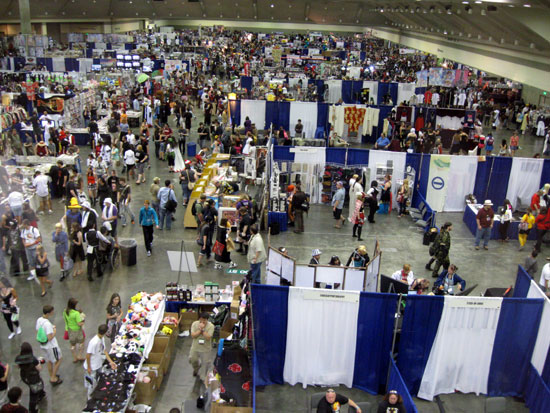 The Dealers' Room is full of people on Saturday afternoon.

Saturday more than any other day, I finally understood what my friends who had been Otakon department heads had said for years. They always insisted that they were working from dawn to dusk, barely having enough time to eat, let alone see anything at the convention. If I hadn't had lunches provided for me by the Otakon Staff Suite, I probably wouldn't have eaten anything other than a few handfuls of fruit or chocolates, provided to me by either press or staffers throughout the day. A sandwich eaten on the run (literally) is still better than no sandwich at all!

Fortunately, my last assignment of the night was actually a good bit of fun. We had been working with Roger Shackelford of Tainted Reality [SITE HAS SOUND] to facilitate an Internet radio talk show which would feature musical guest MELL, as well as voice actor Tony Oliver and several members of Otakon staff. This was an idea that had been gelling for months through MELL's management, in conjunction with Otakon staff, and I'd been brought in the last couple of weeks to make sure it happened.

Once we got Roger's equipment set up, everything went smoothly. It was actually a nice, relaxing time. Roger spoke to Tony about his experiences at Otakon and his recent projects. 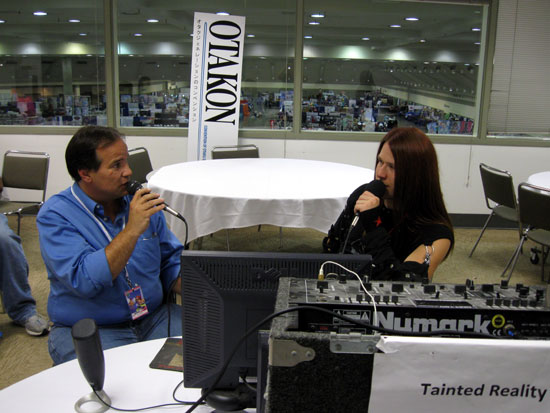 Tony Oliver is interviewed by Roger Shackelford of Tainted Reality

After Tony left, Roger spoke to the Otakon staffers, including our vice president, until MELL arrived. She swept in with her people, and we seated her and stepped outside in the hallway to chat. I thanked the Otakon staffers who had participated. As I stood in the hallway, chatting easily with everyone, I remembered what The Cousin had told me a day ago: "Have fun." And I was.