Out of the Pool

Sunday morning at Otakon, I awoke with a shock at 8 a.m., realizing immediately that something was wrong. The light was wrong in the room; it was too bright. Indeed, I had intended to be in Press Ops by 7:30, but my husband, The Gryphon, had accidentally set the alarm wrong.

I called my lieutenant, The News Producer, and found out he was on his way. I gave him instructions for what to do when he arrived and told him I'd be down ASAP. I also fielded a phone call from the Rock Chick, who had arrived at Press Ops before either of us but who didn't have a key to let herself inside.

Then, after taking a quick shower and grabbing some portable breakfast (some multigrain breakfast bread with peanut butter and jelly and some fruit), I dashed off to the BCC.

Since I was in such a hurry, that was the only morning I didn't get a shot of myself in the mirror. I did, however, get one later when I was headed over to the staff wrap-up party, which has been nicknamed Dead Dog, because so many staff members are "dead dog tired." 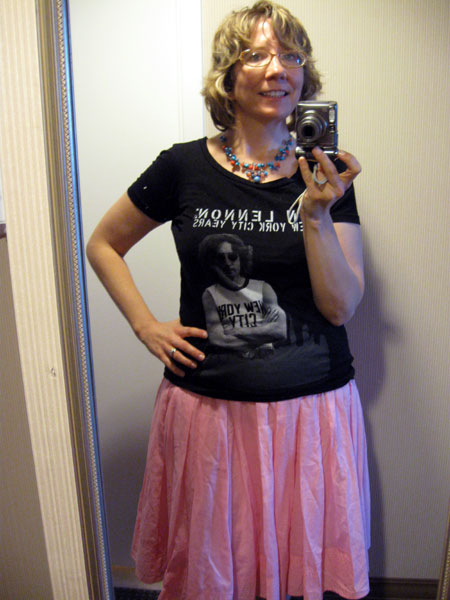 Me on Sunday,
headed to Dead Dog

Sunday was a shorter day for us and, of course, this meant fewer press events. Still, I checked in on the ones that were likely to be a little more complicated, to make sure everything was functioning smoothly. We had a few minor snags but managed to resolve them fairly quickly. As a whole, it was a much more relaxed day. 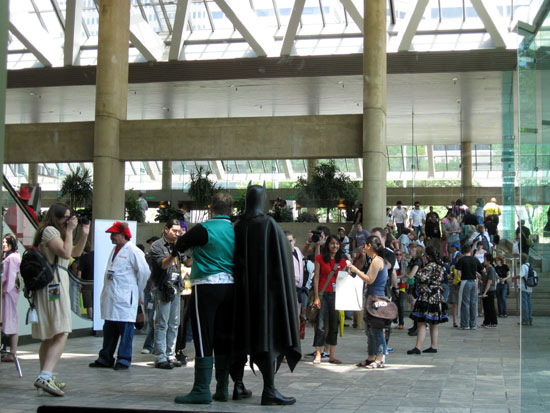 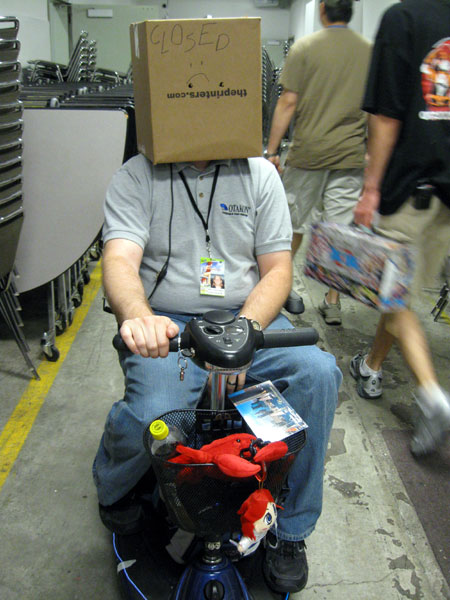 Our president, The Minion, with a mask that reads, "Closed."

Since it was a more relaxed time, I was able to do interviews with three organizations that requested it. First was MTV Iggy for a video piece they were putting together that is not yet available online. (Other MTV Iggy coverage is here).

Then I sat down to talk to the Baltimore Sun reporter, Julie Bykowicz, for an article that appeared both in print and online the next day.

Finally, Stephen Walker of Kawaii Films and I went up into the lobby for a more interesting background while he interviewed me for his documentary, Kingdom Kon (5-minute preview available here), which is about anime convention culture and for which he's been traveling all over North America. He doesn't yet have any Otakon stuff up, but I'll try to remember to post a link when he does.

I also had enough time to talk to some representatives from Anime Central, who were interested in sharing ideas about how to run an anime convention. They were touching base with many department heads, including our board of directors, and I was happy to be able to spend a few minutes with them. I also intend to follow up on that by e-mail later. Similarly, I met a few people from Anime Expo at the Dead Dog dinner, and while I didn't get much time to speak to them, I will follow up over e-mail.

Since we only had gofers available until 1, and we needed to do a proper inventory before packing up our boxes, we got a spare staffer from the staff pool. He was invaluable in organizing our materials and making a list of absolutely everything (something which was not done last year, which made it difficult to plan, since I had no idea exactly what office supplies had been stored).

I believe we shut down a little later than we had the previous year, not leaving the BCC until about 5 p.m. Then again, maybe that's just the reality of being a department head. I left at the same time as the head of Registration, who was smiling easily and carrying a large sheep plushie. I didn't ask him why. I also happened to catch the Spec Ops staffers, leaving en masse, in high spirits. 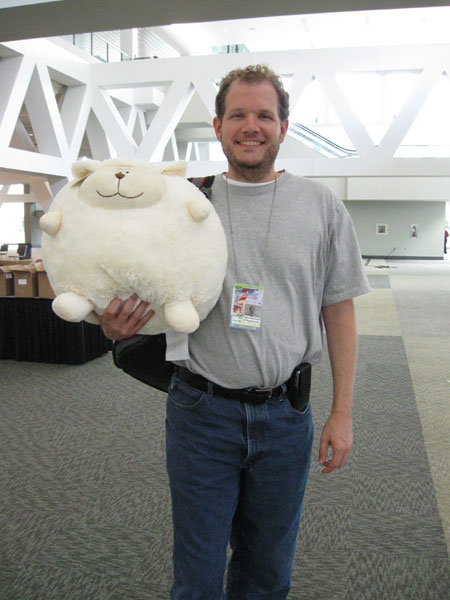 The head of Registration with a sheep plushie. 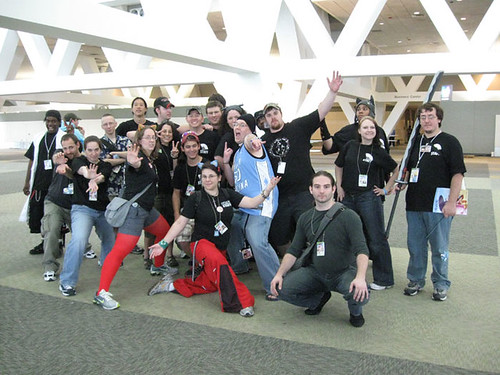 Spec Ops staffers on their way out of the BCC Sunday afternoon.

Of course, my job wasn't done just yet. I had been given the final unofficial attendance numbers, so I parked myself at a computer in the Sheraton lobby and put together a press release. I called our president, The Minion, to get some color on the numbers and then, after I'd written it up, I called him back to run the wording by him.

I also had a few more calls and e-mails come in about Press Relations concerns, which I fielded before heading up to my room. Usually after load-out on Sunday, I have time for a nap and a shower in my room before attending Dead Dog. This time, I only had time to change.

Fortunately, some of my oldest friends were the first to arrive for the dinner, so I hung out in the lobby with The Cheshire Cat and his wife, The Paper; as well as The Dormouse, The Court Wizard, and a staffer I'd just befriended this year, who works in Publications pre-con and was in Registration at-con.

Once the doors were opened for dinner, and people were seating themselves and getting drinks, The Gryphon, who had volunteered to help Vyxle with Dead Dog, had a request. He said that she was putting together a slide show of Otakon pics over the years and wondered, since I had so many online, if I would go through them and put them into a folder for her. I readily agreed, and I probably spent about a half hour or more doing that at a table in the front, while everyone else buzzed around, socializing. People kept sitting down at the table, thinking that's where I was seated, and I had to tell them, "I'm not sitting here. I'm just working on something for Vyxle." Then they'd stand up and leave! Never knew I was so popular.

They showed the pictures before the main speeches of the evening, following the dinner. First, they showed a folder that contained mainly photos that Vyxle had gathered from other sources, plus a few of mine. But most of mine were in a second folder (which Vyxle started for me and had me use while they were testing out the first folder with the projector). The second folder should probably have been dumped into the first folder, saving some confusion. Initially, it didn't get shown, but after I reminded Vyxle about them, she showed those, as well. I was happy that some of my favorite photos got a big reaction from the crowd, who either laughed along with the zaniness of the pictures or applauded the people in them.

Of course, I did have to explain to a few people afterwards that I didn't know the origin of all the pictures in the first folder, because there were some rather unflattering photos in there of people I know, including The Gryphon. I understand they had come from some Facebook albums and such that people were sharing before the convention, to get psyched up for the event. There were also quite a few pics of me in there, which I swear I did NOT add! I only put in one picture of The Gryphon and me in the Dealers' Room in 2004.

If we do something like this next year, I think it would be best to solicit favorite photos from people ahead of time, so that only photos that people like get in! 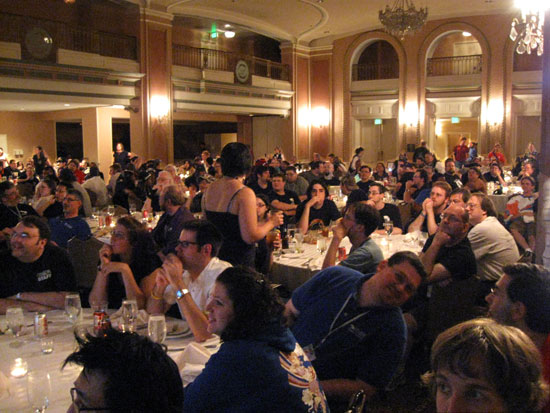 The staffers listens to speakers at the Dead Dog dinner.

Following the speeches and thank-yous, they had a random drawing where staffers could win prizes. I won a MELL T-shirt, size medium, which was random but extremely fitting. Her concert was the only thing I got to enjoy this convention! I thought when I held it up that it would fit, but back in my room when I tried it on, I discovered it's too big. Well, it will make a nice nightshirt. I also got two disks of an anime series, Negima!?, which looks cute.

After dinner, we could socialize in some upstairs rooms. The best part about this was the rooftop portion, where you could peer out over the nighttime city. We stayed and chatted with friends a little while, sampled some chocolates, and then headed to the Battle Bridge to talk to the fellow Guest Relations staffers and share reports in a relaxed setting. 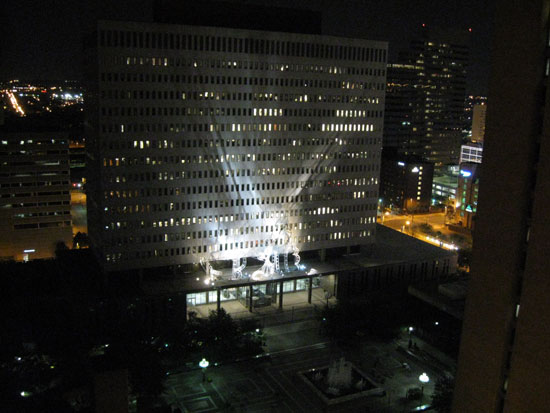 This was the view from the roof at the Dead Dog party.

Monday morning, we slept in and then enjoyed breakfast in the hotel dining room. After packing out, I had to get on the computer and see about distributing an official photo from one of the Otakon concerts that had just been released. I handled that from one of the free computers in the lobby.

For lunch, we accompanied The Godfather and a number of other Guest Relations staffers for a meal at the M&S Grill in the Inner Harbor. Joining us were The News Producer, along with The Invisible Man and his roommate, several other Guest staffers, and The Dormouse, who was finishing his meal outside but who joined us inside to socialize.

The Godfather told us he was very pleased with our performance, and we talked about how things had been handled, plus some ideas for next year. And we swapped funny stories, of course, as well.

Then came the long trek back to Philly, which was made more pleasant by the fact that we picked up our doggie, Una, at the pet sitter's on the way back. She, too, was exhausted, having spent the long weekend playing with other dogs. Our kitty, Luke, waiting for us at home, greeted us with loud, happy mews. It seemed strange that my phones weren't ringing, though I would continue to hear phantom rings for the next couple of days.

Moral:
A department head's work is never done, even when it's done.