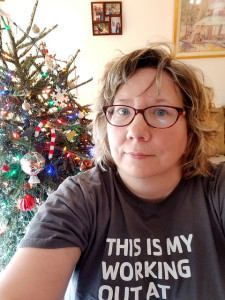 Me after my morning workout today

For those who don't know -- and how would most of you know? -- I'm recovering from a bicep tear I inflicted on myself seven weeks ago. To make a long story short, I fell, at top speed, in full face-plant position, with my arms up at my shoulders. Theoretically, this is the proper way to fall, spreading out the impact and all. However, a couple days later, with my arm still tender, I tried to shovel wet snow. Believe it or not, it wasn't the shoveling that did it so much as a sudden grab for the shovel, when I dropped it. That's when I felt a sharp rush of pain. The next day, I had a giant bruise and a diagnosis, confirmed by my osteopath father, of a torn bicep.

Each day, the pain ebbs away a little further. Each day, however, I face reminders of where I used to be. I was regularly lifting 20-pound dumbbells as part of my workout routine. While I am still, admittedly, carrying far too much body fat, I had acquired a decent amount of upper body muscle. For the first time in my life, I didn't watch my arms wobble in the mirror when doing arm movements in my aerobics classes.

Now, seven weeks in, the workouts that came easily just a couple months ago are simply impossible for the moment. I've paused my home weightlifting workouts until at least February, and when weights are called for in my aerobics classes, I go with weights I previously considered "baby weights." However, I'm making slow strides, getting better every day. A couple weeks ago, I returned to my regular classes at the YMCA -- Cardio Kickboxing, Water Aerobics and Zumba -- and while I had to modify some movements, I felt great about being back. With the holidays, scheduling exercise became more difficult, so I simply focused on the same thing I'd focused on for my first three weeks of rest and recovery: my diet. That was the one thing I could control, so I resolved to drink lots of liquid, track my intake, and avoid alcohol.

You see, in the past, I've often resorted to self-sabotage when I got hurt: over-indulgence, whether alcohol or food, intended to mute the pain. Eventually, I would come back to my senses, usually about 15 pounds heavier, and regret it. That's how I've managed to pack on 45 pounds since my mother died three years ago. First one thing and then another, and I'd fall off the wagon of healthy eating and plunge into despair, trying to fill the void with comfort food that ultimately provided no comfort.

This time, I'm happy to say that I've stayed at about the same weight as I'd been when I first got hurt. It's a little difficult to tell, because my previous scale was very inconsistent. Step on it 30 seconds later and you could get a different reading altogether. I recently bought a more precise digital scale, so regardless of where I was before my injury, I am starting anew now. This scale also tracks body composition, such as muscle mass, fat and water, so I'll be focusing on body composition, not so much on my actual weight. My muscle mass is currently good, but my goal for this year will be to get my fat ratio down into the normal range.

I'm trying to remember to make note of the small milestones. Like today, for example, when I was able to do burpees, the first time since my injury I felt good enough to even attempt them. Slow and steady, with no jumps, but I was able to do it. Right now, when one of my most difficult challenges is to get up and down again, that was a true victory.

The thing is, I'm pretty good at hiding pain, so I usually don't reveal it unless it's impossible to fake it. The arm? There was no hiding that: first of all, the giant bruise and extremely limited strength. Now, when I look normal, I still have to draw attention to it by bowing out of activities that might put too much strain on my arm, like helping to put up tables at the weekly Cub Scout meeting. Before, I was one of the people leading that effort.

With that in mind, I'm going to woman up and admit something that very few people know, except perhaps my sister and my husband. I didn't just hurt my arm in that fall; I also did something to my right shin, on the same side of my body as the bicep tear. That pain, however, has not been as debilitating, so it's easy to hide. Primarily, I notice it when I'm getting down on the floor and getting back up again, or when I start walking after being seated for a while. It's never risen to the level of concern I had about my bicep, and therefore, I simply haven't mentioned it. I can walk and move almost as well as I could before; and unless you knew exactly what I was doing before the injury, you probably wouldn't notice. The ibuprofen I take for my arm helps that, too, but reading up on it, I probably should have been icing it this entire time, as well. I'm going to start doing that now.

When I think about it, my life for the past 20-some years can be seen as a series of injuries. If I start back in grad school, I've experienced the following (in roughly chronological order), almost none of them from organized physical activity:
Looking at this list, you might conclude I'm accident-prone. I'll admit that I am. But I remind myself of the most important thing: I'm resilient. I heal. I did it before, and I can do it again.