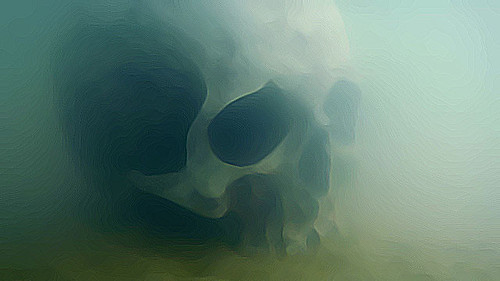 One sun-drenched afternoon, I'd been reading the collected works of Edgar Allan Poe in the living room of my childhood home. I was halfway through "MS. Found in a Bottle," the story of a man lost at sea, telling his final tale as he nears certain disaster.

The tale's narrator, whose ship was devastated by a storm, scrambles aboard a black galleon filled with useless, outdated maps and populated by elderly crewmen. He is certain they are destined for a dark end as he chronicles his experiences.

As the light poured through the gauze curtains, my eyelids grew heavy. Nestled on the comfort of the golden velvet loveseat, my eyelids fluttered closed, and the blue and green floral wallpaper dimmed, soon to be replaced by a muddy, undersea landscape.

I floated through murky depths, sliced periodically with silvery beams from the surface. Unable to move my limbs, I floated log-like through the seascape, soon realizing I was not alone. Surrounding me, the skeletal remains of hapless sailors populated the dreary expanse, in various stages of decay. Torn flesh, leathered and frayed, the brackish water blackened with congealed blood. Browned and ancient, the skulls grinned vacantly at me. Though my skin crawled and my brain repelled at the thought of touching them, I could not move away.

How long I stayed submerged, face to face with these specters, I do not know. Minutes, perhaps. Or eternal hours. At last, I awoke, disoriented, into the gold and green living room, which now seemed dim and cold.

Quite a specific remembrance, don't you agree, for a dream that took place nearly forty years ago, when I can barely remember the story that brought it on? But as countless dreams, and books, and memories, have receded into the acrid miasma of time, these sunken skulls will not desert me. They have followed me into other dreams, revealing themselves in rotted coffins, just underfoot, so that I nearly fall in. Always, in these bleak moments, I am alone in dank darkness, riveted to the abhorrent spot.

After long persistence, the skulls have followed me into the waking world, as well. While helping with a creek cleanup, after months of isolation in the midst of a pandemic, my gloved hands plunged again and again into a marshy creek, and I felt the skulls even then, staring eyeless through the ripples. I would not have been surprised if I had pulled up a jawbone, entangled in a piece of plastic, a snake coursing through the sunken eyeholes.

But nonsense, you say. Skulls cannot move. How could they follow you anywhere? Of course, I am afraid you may be right. Just like my dream self could not move away those eons ago, my mind has never moved away from those stony visages. An undercurrent to my thoughts, they've influenced me to watch forensic shows, and to ponder biology basics. I've even given my son an anatomic model of a skull, which sits in pride of place atop his bookshelf.

Genealogy, my preoccupation since losing my mother seven years ago, can be a litany of loss: the neat dates marking the bookends of a life. I'm a lurker in cemeteries, prowling the aisles (never atop the graves) to read the names and wonder about the lives those bones once lived. I've visited some of my ancestors to leave rocks on their tombstones. On one, the earth was so soft, I nearly fell in, and laughed an unearthly chuckle.

I wonder, sometimes, if I have ever truly awoken.
Collapse