Our cat, Luke, has been super affectionate since we got home from Otakon. Yesterday morning, as I sat down at the computer to check e-mail before walking the dog, he made a little "mew" sound and hopped up behind me on the chair. I scooped him onto my lap, petting him with both hands as he purred happily.

He always does this when I've been away for a while, soaking up every bit of attention. 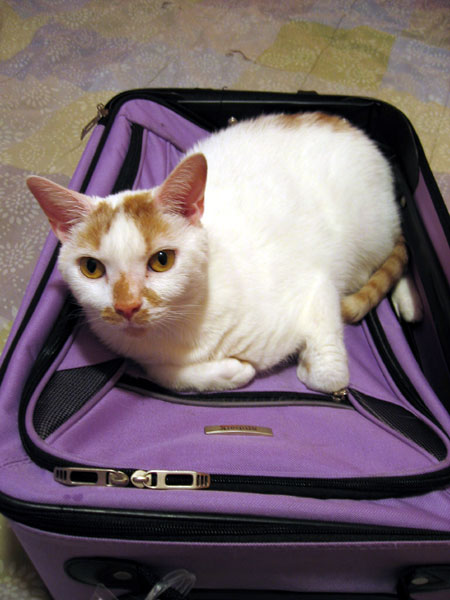 Luke on my suitcase
(Faster-loading version)

Lately, Luke has developed the habit of joining my dog, Una, on the couch to watch me do my daily aerobics workout, with the help of the video game Dance, Dance Revolution. Una learned a long time ago that if she lies on the couch, she's out of the way of fast-moving feet. While Una lies there in a half-nap, Luke paces back and forth, purring in anticipation of me finishing each song. In between, I pet the two animals and take a sip of water, a happy ritual.

Sometimes, Luke gets curious and hops down on the floor to get a closer look at my feet. Then he usually gets scared and runs away. I'm sure I seem to him like a giant stomping around an innocent landscape.

Luke tends to be a bit shy. He tends to hide from people until he knows them well, and even then he might not allow them to pet or hold him. Fortunately, the woman who feeds him when we're out of town doesn't have this problem. When she met him, he greeted her almost immediately. I think she just has a way with animals.

My sister has rarely had more than a glimpse of him, and she told me the other day that he is a "large male cat." I have known my share of large cats, and I don't consider Luke to be one of them. He was the runt of his litter, and barely survived. At his adult weight, he remains at a steady weight of about 10 pounds, in part thanks to strict monitoring of intake. I've known too many indoor cats who are obese and unhealthy. Whenever I visit a family member and see their cats, I come back and think that Luke is small.

What he lacks in size, he makes up for in attitude, especially when it comes to creatures that are smaller than him. I've written before about how fearlessly he protects our house from ninjas disguised as mice and squirrels.

But beneath it all, he's the orphan kitten, found with some siblings, abandoned in a warehouse. I think he has some understandable abandonment issues.

Perhaps this is why, every time I pack to go away, at some point I find Luke reclining in or on my suitcase. I always joke that he's trying to pack himself. But maybe, as I prepare to go away, he simply wants to remind me why I need to come back.

Moral:
Cats are just as emotional as dogs; they just show it differently.