In addition to tracking Otakon coverage this weekend, The Gryphon and I spent some quality time together.

On Saturday, we had dinner at P.F. Chang's at the Plymouth Meeting mall. We opted to sit at the bar, since it was the quickest way to get served. I had a delicious dish of scallops and snow peas with brown rice, and we shared some asparagus in garlic sauce.

Afterwards, we saw the Pixar movie Up at the Regal Plymouth Meeting 10 movie theater. 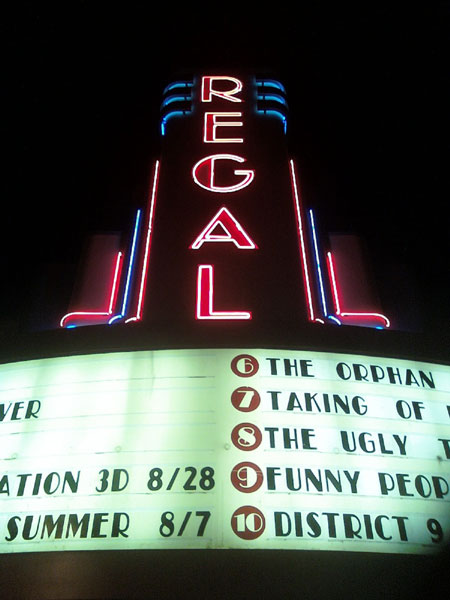 Since I hadn't heard much buzz about Up, I wasn't sure what to expect. It was definitely as good as any other Pixar movie I've seen. In fact, it made me laugh harder than any movie I've seen recently.

Anyone who's seen the trailers knows the movie is about a cranky old man, Carl, who decides to get away and take his house with him, using thousands of helium balloons.

Along the way, he meets an unintentional stowaway, a little boy named Russell, as well as a couple of other colorful sidekicks, including a dog named Dug who talks using a high-tech collar.

What you can't tell from watching the previews is that another factor lies behind Carl flying away with his house is to honor his deceased wife, who had an adventure bug in her early years that she never got a chance to pursue. This Pixar movie is somewhat unusual for the twin facts that not only does it feature an old person, but a character dies within the first 20 minutes. The movie starts by showing us an abbreviated journey through Carl's life with his wife. I believe they do this in order to make the viewer care about her and about honoring her memory.

I really don't think I'm spoiling anything by mentioning this, not only because I've seen it in other reviews, but because anyone who's seen the trailer knows that Carl is a lonely old man. There are, however, many surprises I will not reveal, some of which are the funniest moments in the movie, which had me laughing uncontrollably.

No matter how good other studios get at 3-D animation, no one has yet managed the blend of skilled 3-D animation, great storytelling, and fascinating characters. For those of you familiar with Pixar movies, John Ratzenberger does do some voice work in this movie, although he does not play a main part.

Carl and his tagalong, Russell, fly off to South America in search of adventure. But you should be careful what you wish for. They find their share of adventure, plus a few things they did not expect. You do have to credit Pixar that even during some of the dramatic scenes near the end, they still find ways to inject humor and lightness. Too many movies start out as comedies or light films and spend the first 1/2 of the movie making people laugh. Then, when the plot hits its crisis point, the tone of the movie changes to something darker or more serious, effectively negating the fun of the first half. Pixar's animators still find ways to make people laugh, which is even more fun due to the fact that it's unexpected.

One of my favorite parts of this movie was the talking dog, Dug. He is one of the only talking dogs I've seen in an animated film who actually acts like a dog, down to his facial expressions and body language. Some of those funny moments have appeared in the trailers, such as when he's talking and then interrupts himself to swivel his head and yell, "Squirrel!" These moments are a delight. Dog lovers will find them especially funny.

Just as Dug actually acts like a dog, Russell acts like a little boy. Not just the animated world but in the movie world in general, is populated by little boys who act like little boys only when it's cute or precious but who usually act like sophisticated mini-adults, with wisecracking jokes and a remarkably mature grasp of situations.

Russell, on the other hand, acts like a 10-year-old boy, capable of understanding some concepts and yet falling back on childlike behaviors at other times. Anyone who has either been or knows a 10-year-old child knows that's how they act.

Ed Asner does a terrific job as the voice for Carl. I can't imagine a better pick for this role. In fact, I was telling The Gryphon as we drove home from the movie, "I bet when they were writing the script, they said, 'We need somebody like Ed Asner for this. Hey, let's ask him!'" Asner has made a career for decades of playing the gruff guy with the heart of gold, and Carl fits right into that pattern, though with his own characteristics, as well.

Overall, I think it ranks among Pixar's best.

In the beginning part of the movie, I got a picture message from my sister, taken on the Grand Carousel at Knoebel's Grove. She and her husband had met up with Mom and Dad for another enjoyable day. She'd called me Friday to invite us along, but The Gryphon and I opted out. We've been doing a lot of running around lately and needed a weekend to get caught up.

I would have been more tempted if we hadn't just gone to Knoebel's and also if it wouldn't be a long day that would require us hiring a dog walker at the last minute.

On Sunday morning, we had brunch at the Radnor Hotel, which The Gryphon had heard was quite the spread. However, if we'd know what the weather would be like, we would have stayed home and had frozen waffles.

The rain was coming down in buckets, and there was flash flooding on I-476, the Blue Route. The worst portion was under an overpass, where the traffic was down to two lanes, creeping through deep water. The outside lane had even deeper water.

I was a little worried that we might get stuck, but I figured with this many people nearby, there was a good chance someone would help us out.

The brunch, though, was worth it. Instead of just a typical selection of scrambled eggs, waffles, pastries, fruit and maybe some turkey and ham for the lunch crowd, they had a wide range of both breakfast and lunch foods. I wanted to try many of the lunch foods, but I didn't plan out my plate very well and ended up placing a blintz with cherry sauce next to some salmon with orange sauce. Fortunately, the sauces didn't bleed into each other enough to ruin either dish.

We enjoyed trying out the different choices, and for dessert (which I don't normally have at brunch), I tried dipping a couple things in the chocolate fountain: strawberries, a marshmallow, a pretzel, and a mini cream puff.

When I added it all up at home, even though I'd been filling my plates with lots of fruits and vegetables in addition to the other dishes, it added up to slightly more than I'd typically have for breakfast and lunch combined.

Still, it was a nice experience, and I'm sure we'll return. Hopefully, next time we won't encounter a flash flood on the way.

Moral:
If we're going to brave floods for it, the brunch better be good.