It's been a while since I shared any found items, so here are a few things I've found that made me smile.

First is a brief hand-written note that appears to be written by a child. I call it "The Monster at the Door." The note starts with very precise writing: "Who Is at the door." Then, in a somewhat sloppier handwriting, the question is partially repeated: "Ding dong who is" and the last couple lines devolve into sloppy nonsense: "wononto MORE" and then something completely unintelligible. 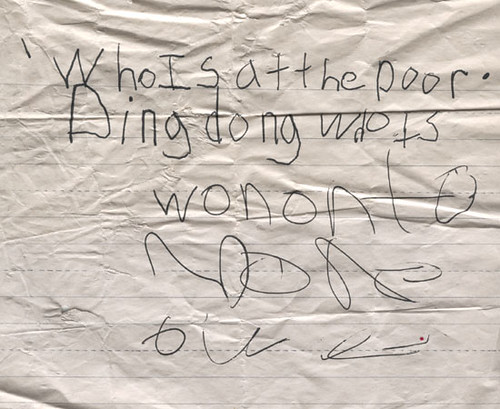 I imagine that would be a typical response to finding a monster at your door: losing your grip on common sense entirely.

Next is a page from a coloring book. It shows a wide-eyed, boyish guy with no visible muscle definition lifting a somewhat small barbell over his head. A sign on the wall above him reads, "Mr. America Contest." A child has colored him with fanciful blue arms, a pink shirt, blue tank top and belt, and yellow face, shorts and legs. He looks more like a Japanese robot than like a body-building contestant. 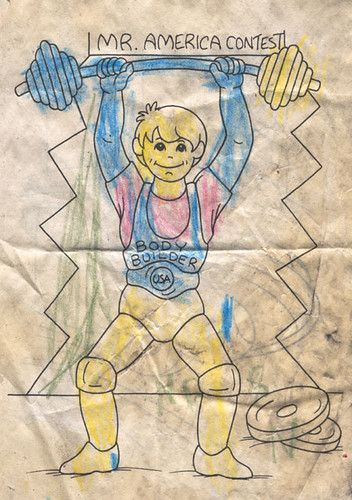 His Ultraman makeover is entertaining enough, but the fact that a contestant in the Mr. America contest (history here, photos here) would look like Speed Racer without his helmet makes me smile.

Finally, I found an old Transpass a year or two ago. A Transpass is used for unlimited travel on SEPTA (South East Pennsylvania Transport Authority) buses, trolleys, and the El (which is UNDERGROUND for much of the time but is still called the El, which bothers me tremendously).

This particular Transpass is notable because it's covered with teddy bears wearing train conductor outfits. A logo in the middle of the picture says "Transit Museum Store, Philadelphia." 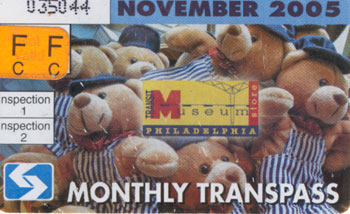 The bears appear to be raising one of their number up on their shoulders. I imagine they're exclaiming, "Hooray for Bear #72!" He must have done something terrific, such as managing to get their picture on a Transpass. Hooray!

Moral:
All Transpasses should have cute pics on them.