On Saturday, The Gryphon and I attended the wrap-up meeting for Otakon 2009. This is where we handled business related to this year's convention, and section heads and officers gave their final reports. 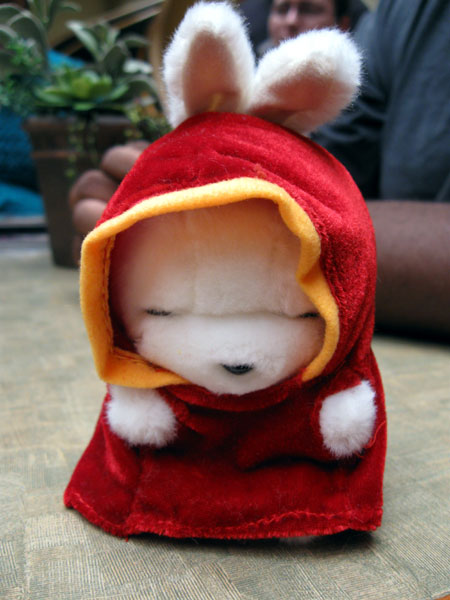 We made an effort to get there earlier than usual, so that we actually arrived before the board of directors meeting. The Gryphon is a member at large of the board, and he said there were some important legal matters to discuss.

While the board was in a closed-door session, I socialized in the hallway with The Godfather, The Cosplayer, the head of Exhibitions, and several other people. The Cosplayer (who will soon be moving to California to pursue a degree in fashion design), was giving away a box of free stuff, including some actual laser discs. One newer staffer took all the Otakon T-shirts, saying he was going to mount them in display cases as collector's items.

The head of Exhibitions took a cute plushie — a white rabbit wearing a red velour robe. I asked if I could see the plushie and immediately pulled up the robe and began pulling it over the bunny's head. For this, I received a good amount of ribbing, but I admitted that I always try to undress plushies wearing clothes. This goes back to childhood days, when nothing irked me more than dolls or stuffed animals with their clothes sewn on. I liked to have the option of dressing them in other things, such as clothes I made myself.

I asked the other women present if they had the same habit, and none confessed. But towards the end of the meeting, I heard my name and turned around. The head of Exhibitions pointed to another female staffer, who was holding the "naked" plushie in one hand and the robe in the other. She waved them and smiled. Turns out I'm not alone!

Between the board meeting and the general meeting, we only had a brief break. I was hungry, so I told The Gryphon I'd get us some food. I met The Corgi Mama in the hallway and asked her where I could go. She suggested Starbucks and agreed to go with me. We got directions from the front desk, but I got confused coming out of the parking lot, and The Corgi Mama pulled up directions to Starbucks on her iPhone. We were amused to discover there were at least 12 within a three-mile radius!

When The Godfather, who was the head of Guest Relations and my superior, he praised me for my handling of Press Relations and said that the department had received accolades from both major media organizations and guests. It was nice to hear, especially in a public forum.

Of the other reports, the most entertaining was by the head of Logistics, who gave a Power Point presentation for each of the sections he oversaw, with slides giving the key points. When we got to the slide for Main Events, it had only two points: "Stuff didn't die. No one blew up." If all the reports had been so pithy, we would have been out of there at 1. 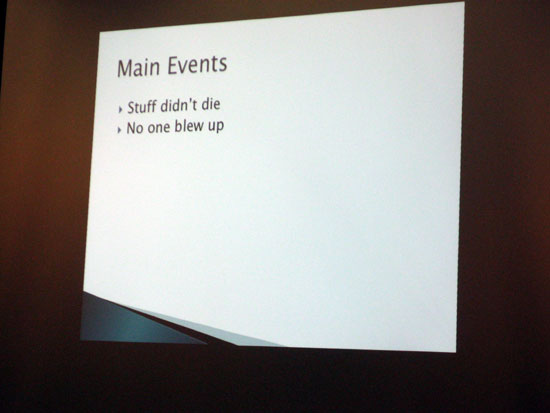 At the end of the meeting, which wrapped up exactly on time, we headed over to The Godfather's house. He was hosting a cookout for members of the Relations, as well as a few other local staffers. It was the first time I'd been to The Godfather's place and the first time I saw his cats in person. They really are adorable. I found them to be extraordinarily outgoing and calm, compared to my high-strung kitty, who hides from every visitor.

I was particularly fascinated by the short-haired kitty, Fuu, who has extra toes that look like thumbs. At one point, another guest and I were trying to figure out if she could use them like thumbs. He was holding a pen out towards her and waving it, to see if she'd grab it. I announced to The Godfather that we were teaching his cat to use her thumbs. 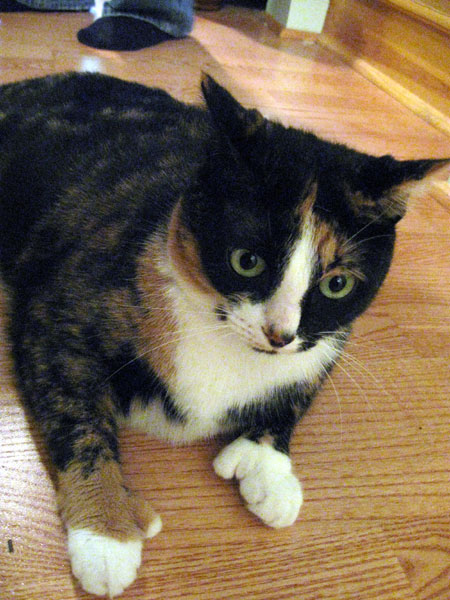 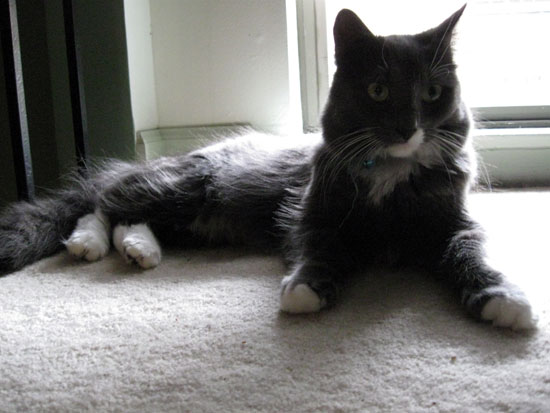 Of course, The Godfather barely noticed, because he was busy preparing the food. Unfortunately, his grill fell victim to an undiagnosed trouble and much of the food prep had to move inside. I thought everything turned out fine, but The Godfather lamented that he couldn't grill things as planned. He provided a nice selection: sausage, hot dogs, hamburgers and chicken, with lettuce and tomatoes, buns, a fresh salad, tortilla chips, salsa, cookies and a selection of different types of cheesecake, as well as a wide supply of beverages.

He had an expanding picnic table bought at IKEA, which he placed in the community yard near the playground, behind his town house. We gathered around it on both his chairs and some folding chairs people had brought. 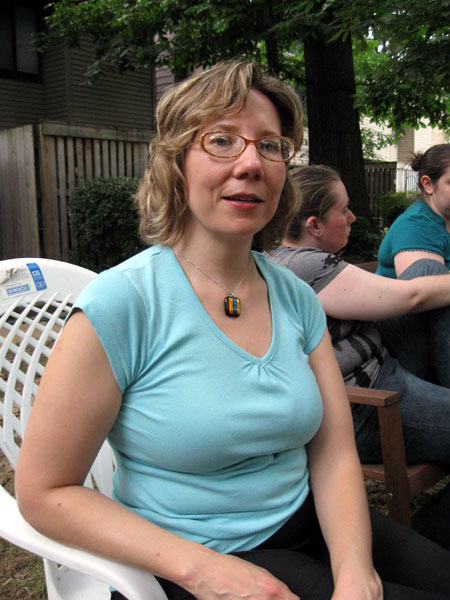 Me at the cookout
(Faster-loading version) 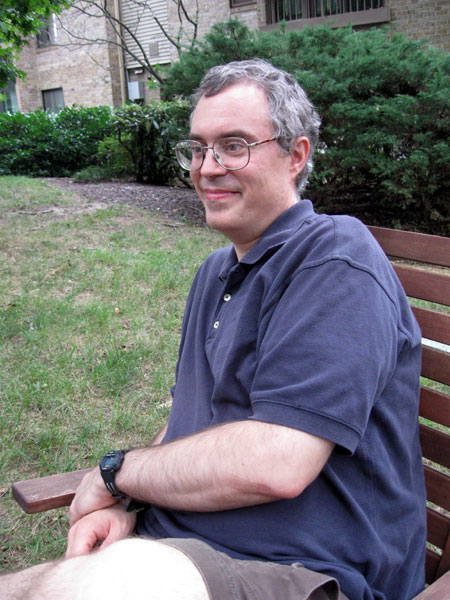 The Gryphon at the cookout
(Faster-loading version)

For a brief period, Hellbuny tried out one of the spring ponies at the playground, just long enough for us to get some silly photos, with him making an angry face and brandishing a wooden pop gun. Love it. 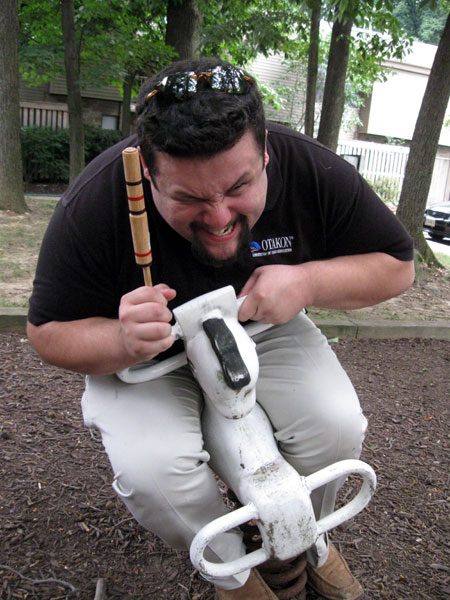 One of the more amusing conversations in the early part of the evening was a heated debate over which was better, Star Trek or Star Wars. As two guys on opposite sides were making their points rather vehemently, we joked that it might turn into a throwdown. The Godfather shook his head sadly and sighed: "I knew it would come to this some day."

I'm fairly certain which side of the argument The Godfather would come down on, because he gave me and a couple other people the grand tour of his place. This included several rooms upstairs, where he keeps his cherished collector's items: shelves lined with books and magazines, many of them signed; collectible figurines from various SF shows and movies, including some original Star Trek figures and a series from Lord of the Rings; and autographed photographs and anime cels.

I hadn't seen such a collection since college, when we used to hang out sometimes at The Mad Hatter's place. He had a wide selection of collector's items, emphasizing collectible toys and models. I'd imagine that by now, nearly 20 years later, it's even more extensive.

Considering that we were all Otakon staffers, it actually took us more than an hour to start talking about the con, which is something of a record. Around the dinner table, we mostly swapped stories from this year. I always love such chat sessions, because it gives me a chance to learn what happens in other parts of the convention. It's easy to get tunnel vision and think of only your own department, forgetting there are more than 400 Otakon staffers, going through their own interesting experiences.

As the evening wore on, people talked more seriously about Otakon business, evaluating what we'd done this year and talking about how to improve. Since The Gryphon and I were highly interested in this discussion, we stayed later than we probably should have and eventually excused ourselves, citing our long trip home.

As it was, while I felt perky when we took off, I gradually grew more tired. We had to stop at not one but two rest areas so that I could take a nap and refresh myself. That's why I ended up adding even more calories to my day, purchasing a Starbucks bottled frappuccino for the extra boost.

We did, however, make it home safely. Fortunately, we'd arranged for the pet sitter to keep Una overnight, so we didn't have to bother them in the wee hours.

The thank-you cookout was a nice gesture by The Godfather after all of us put in so much hard work.