As I mentioned before, I was a big Michael Jackson fan back when his album Thriller was out, so for today's Memory Box, I'd like to share some of the items I collected in those glittery days.

One of my Michael Jackson keepsakes was a children's humor magazine named "Bananas," which featured him on the front for an article about winners and losers of the year. 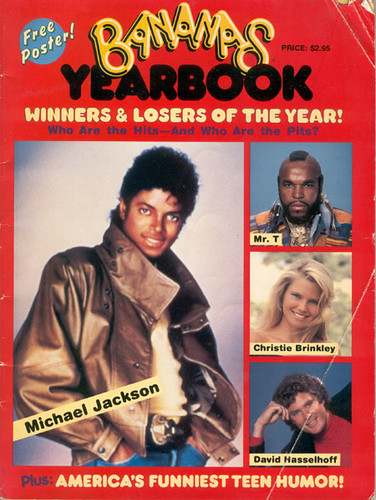 You know, that list still holds up pretty well. Except that everyone knows the coolest thing about Hasselhoff's popular series Knight Rider was the car, KITT.

I also collected a few things I no longer possess, such as a couple unauthorized biographies, which I believe I donated to a book fair years ago, and a poster from the "Billie Jean" music video, which used to hang on my bedroom wall. I didn't throw it out, but rather rolled it up carefully and stored it in my room. Perhaps it got damaged and my mom threw it out.

Oddly enough, I only had one of Michael's albums, Thriller, although I picked up a couple Jackson 5 singles at yard sales. It wasn't until much later that I actually bought CD versions of Bad, Invincible, Off the Wall, and of course, another copy of Thriller.

I still have a couple buttons featuring Michael Jackson photos. I deemed these too precious to actually wear, so I kept them in a dresser drawer, along with some costume jewelry and a pair of blue venetian-blind sunglasses (yeah, Kanye West, you're rocking the look of a 12-year-old girl in the '80s!). 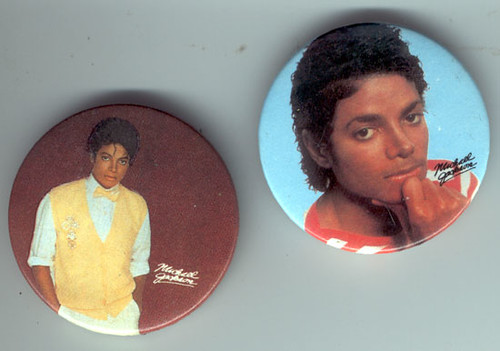 But undoubtedly my best Michael Jackson memorabilia are a set of Michael Jackson trading cards and stickers. You used to be able to buy them in the store, next to baseball cards. Since I didn't have an official allowance, I could only buy them sporadically and never collected a full set. Still, I ended up with 21 different stickers and 26 different cards, plus a few duplicates.

The stickers were on stiff cards that had portions of a photo on the back of each one. If I'd ever had a complete set, I would have been able to complete two different photos of Michael. The cards contained factoids on the back, many of which revolved around Thriller, such as "Michael Jackson's album Thriller has held the number 1 spot on the Billboard charts for an amazing 33 weeks since its release in December 1982."

It's sort of amazing the cards are still in such pristine condition, when you consider that I kept them for years, fastened with a rubber band, inside the "junk drawer" in my bedroom desk. I'd pull them out occasionally to spread them out on the bed and arrange them in order of most to least favorite pics.

Here are a few of my favorites. 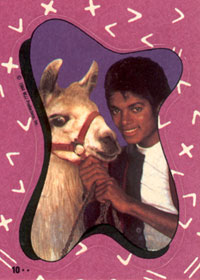 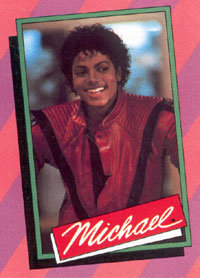 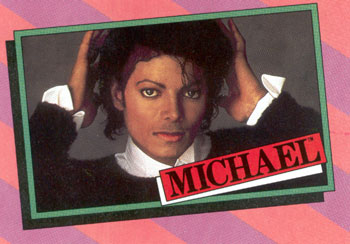 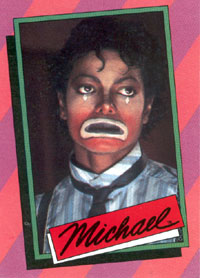 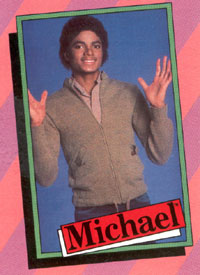 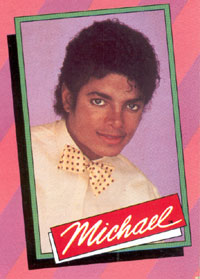 While they are supposed to be trading cards, I never would have traded them to anyone else (although I wouldn't mind finding the ones I never obtained). For many years, I even kept the bubble gum that came with them, until the gum was so hard it became inedible, not to mention being a risk for attracting insects.

It was only for a brief time that I was a collector of Michael Jackson memorabilia. By the time Bad came out, in 1987, I was 16 and felt that I'd outgrown my childish obsession.

You might ask why I still hold onto these items, but they were such a big part of my adolescence that I can't imagine getting rid of them. Plus, every once in a while, it is fun to pull out the Michael Jackson trading cards.

Moral:
Twelve-year-old girls will buy anything that features their fave pop star.