I never knew there was a freshwater wetlands in Philadelphia. Now I do, thanks to my doggie, Una.

As anyone knows who's been reading this journal, this has been a busy summer for my husband, The Gryphon, and I. When we weren't visiting family, doing Otakon work, or participating in other activities, we were at home working on personal projects.

Saturday morning, I was petting Una and remembering how we used to take her to state parks on a regular basis. I couldn't remember the last time we'd done that.

While The Gryphon cooked me breakfast, I flipped through a book called, Philly Dogs Have More Fun by Carol S. Armen. It lists places you can take your dog in the Philadelphia area. One that struck my eye was the John Heinz National Wildlife Refuge in Tinicum, which is the largest remaining freshwater tidal wetland in Pennsylvania. 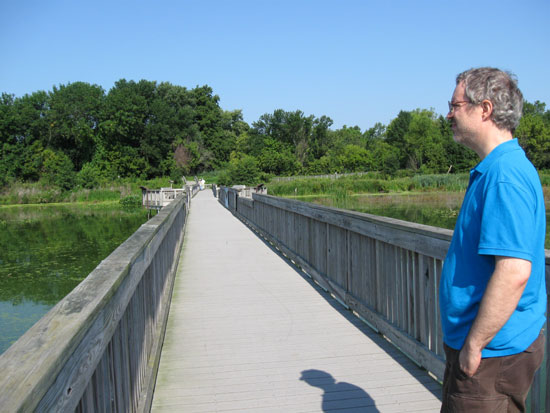 The Gryphon on the boardwalk at the wildlife refuge

I was intrigued, so I asked The Gryphon if he'd like to go. We agreed it would be better to start out early, to get a walk in before it got too hot. So Sunday morning, we set the alarm and got up early, making our way to the marsh to see what we could see. Maybe some birds. The booklet said there was good bird watching at the end of August, and while it was mid-August, we figured it might be starting.

Of course, Una got very excited when we arrived, but she got just as excited when we stopped at the side of the road to consult The Gryphon's iPhone, as our original directions were incorrect.

The first thing Una did upon leaving the car was to leave a present in the grass (if a dog ever gives you a present, don't open it). Fortunately, I had some bags with me, as well as hand sanitizer. I didn't see any bathrooms, just port-a-potties. There might be some in the visitor's center, but I'm not sure.

Not long after we started our hike, we met some bird watchers, all of whom were very friendly. They pointed out some large white waterbirds, visible through the foliage, at the other side of a large body of water, which I later found out is called the Impoundment. They also told us to stop in the visitor's center before leaving and pick up a schedule of their bird-watching hikes and events. Of course, I'm not sure that Una would be welcome at those events, even though I'm fairly certain she wouldn't create a disturbance. She hardly noticed the wild life, so occupied was she with eating grass and trotting along like an insanely happy pup. 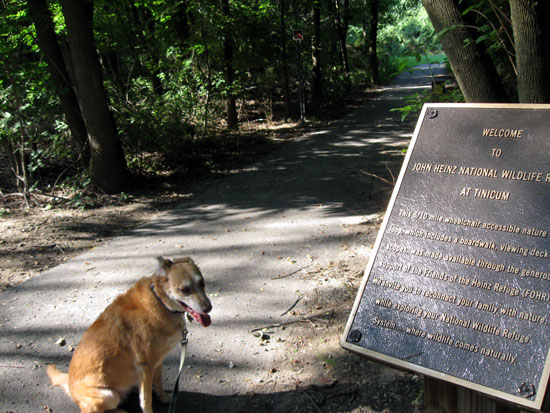 Una at the head of the trail, anxious to get started

Along the trail were signs about the wildlife you might encounter on your visit. In a wooded area was a sign about an owl. We joked that it would be funny if we looked up just then and saw an owl perched in the branches. There was also a sign about the sounds you might hear in the woods, and they were certainly right about one thing: "the incessant song of cicadas."

After we left the wooded area, we crossed a boardwalk that crossed the Impoundment. You could look on either side to view the birds. I found myself wishing I had a camera that could get good telephoto wildlife pictures. The birds seem to think that humans are OK, but best kept at a distance.

There were a few permanent telescopes which you could use to view faraway birds. Of course, in some cases the birds were sitting at inconvenient places, obscured by tall reeds from sight of the telescope. All accidental, I'm sure.

The Gryphon, who tends to be better at such things, pointed out the various types of birds, partly from his own knowledge and partly from signs posted on the boardwalk. According to him, over the course of the day, we saw:


"Some type of gulls" is about the best I can usually do, which is at least more accurate than "some sort of winged animal."

Even though I couldn't get photos of the birds, it was a beautiful area, and I got a few good landscape shots. 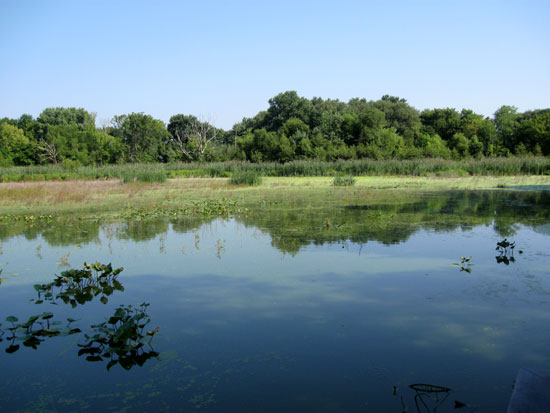 The largest body of water, known as the Impoundment, and a tree-lined shore. 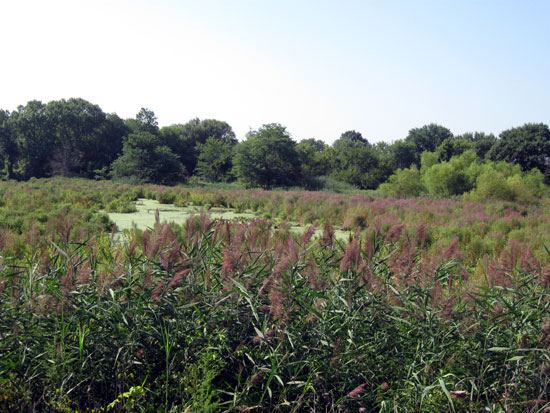 One portion we walked by was very overgrown with reeds. 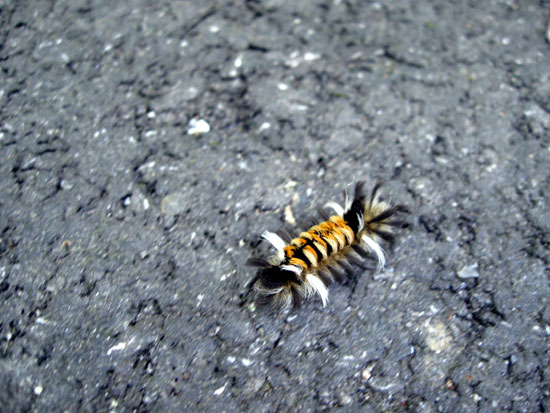 My only successful wildlife shot: a fuzzy, fast-moving caterpillar.

The sun seemed to be interested in seeing the birds, as well, and popped up to a high position in the sky, peering down at all of us. And all the humans, whether carrying binoculars, fishing rods, or dog leashes, wiped their brows with their free hands and said, "Wow, it got hot fast."

There were some shaded portions, even along the shoreline, for which Una was grateful. She was also happy that I encouraged her to walk in the grass, which was cooler, because it gave her more opportunities to snack along the way. The Gryphon came up with an innovative way to give her a drink (we having left her bowl in the car). He cupped his hands, and I poured some water from my bottle into it. Una lapped it up gratefully, even though it tasted like people. (It's people!)

We turned around after making it to the first observation deck, because we didn't want to carry a heat-exhausted doggie. Before beginning our return journey, we stepped on the deck to enjoy a wildly swooping flock of sharp-winged birds (which The Gryphon says were Purple Martins). They had clearly gotten into the caffeine, because they were zooming around like little jets.

At the end of our walk, we paused briefly so that The Gryphon could take a couple of shots of me with Una. As you can tell, she was pretty much exhausted. 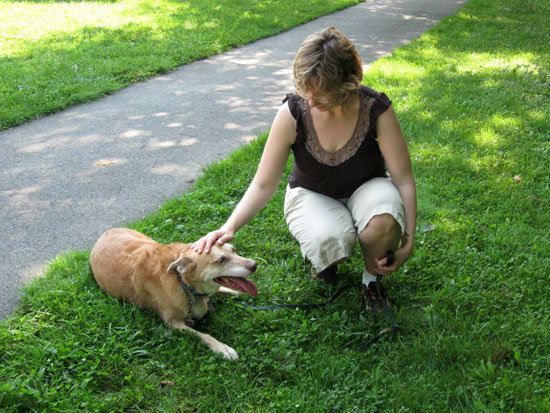 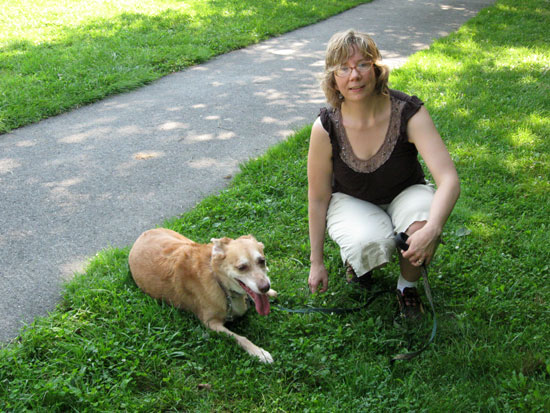 When we got back to the car, I poured water from a separate bottle, brought specifically for Una, into her bowl. She slurped half a bottle down almost instantly, before becoming more interested in figuring out where The Gryphon was. He had gone to the visitor's center to get us the bird-watching schedule.

Since we were hungry, The Gryphon paged through the book to find a dog-friendly outdoor cafe. Most of them were in Center City, and we didn't want to pay for parking. Instead, we drove to the Iron Hill Brewery in Media, where we knew dogs were permitted at the outdoor tables, having seen one there before. Sure enough, Una was greeted like a special guest, and the wait staff cooed over her as if she was the smallest, most adorable puppy in the world. Of course, this meant that Una wanted to come out to greet the waitress every time she stopped by, so we had to tie her leash a little shorter to prevent it. 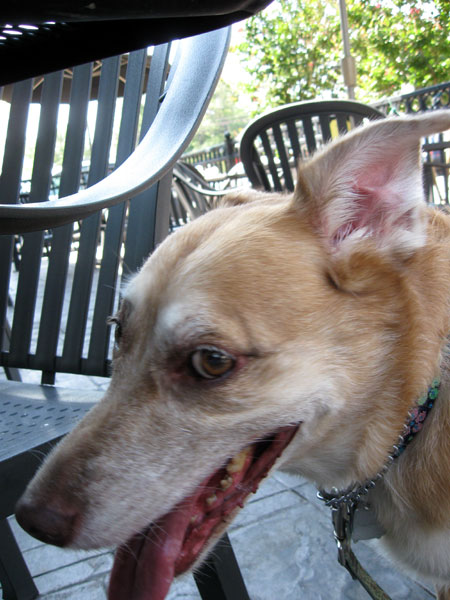 Una at the Iron Hill Brewery

We gave Una the last of the water bottle, which she drank immediately. The waitress filled the bowl for us twice from inside, since Una spilled it the first time. I considered ordering something for Una, but the smallest burger was 8 oz., which was way too much. Especially with the fries. Instead, we fed her immediately upon returning home. Una was happy enough with portions of my hamburger bun.

The best thing about getting up early to go to the wetlands was that, even after spending as much time there as we wanted, and stopping for lunch, I still had time to work on my book.

I think the wildlife refuge would be a nice place to visit once it gets a little cooler. A friend pointed me to some paintings (in the regional landscapes section) by a local artist, Charles Cushing, who has painted the refuge in fall and winter, when it looks gorgeous. I'm sure it would be worth returning. Maybe next time, I'll remember to bring my old Pentax with the telephoto lens. Una, for her part, can sample some fall grasses.

To see where we walked, you can view either this very large map, which is not currently linked to from the official John Heinz National Wildlife Refuge site but is hosted by them (so I'm not sure if it will stick around), or this map of the trails, posted by a Philadelphia-area blogger, Mark Schoneveld.

We walked from the parking area near the Cusano Environmental Education Center, up the left side of the body of water labeled the "Impoundment," across the boardwalk, and then up to the first observation deck. When we returned, we stayed on the shore instead of crossing on the boardwalk again, so that we could see the portion we had not yet seen. It took us about 60 minutes, round trip, with plenty of pauses to enjoy the wildlife.