I had a sixth-grade English teacher, Mr. McLaughlin, who encouraged us to be creative. He is one of many teachers I should thank for making me who I am today. Once a week, he had us do a free-writing exercise based on a writing prompt. On the day the assignments were due, students could volunteer to read theirs out loud. The class would vote for their favorites, and the winners would receive free books from our school's book club program.

I was often eager to read my assignment, but it was the first time I ever wrote for a specific audience. It took me a while to figure out what might work.

For today's Memory Box, I'd like to share a few of my creative writing efforts. Keep in mind, this is what I looked like when I wrote these.

The first piece is untitled, but I'll call it "Breakfast Surprise." In it a fictional older sister named Suzy enters my family and cooks unconventional things for breakfast... like peppers! Of course, I find this amusing for several reasons. First of all, peppers aren't that odd for breakfast, say, in a omelet. But at 11, my culinary world was more limited. Breakfast had to consist of either cereal, pancakes, waffles, or scrambled eggs with toast, as the story illustrates.

Another aspect that amuses me: one of my improv instructors told us that almost every time there's an unidentified woman in a skit, she becomes Suzy. It must be an American thing. (David, by the way, is not my brother's real name, though it is a name I've always liked.)

I apologize for the fourth and fifth paragraphs, which are crammed full of dialogue without proper paragraph breaks between speakers. I apologize, in advance, for numerous punctuation mistakes and a few spelling mistakes in these pieces. Hey, at 11, I didn't know any better.

Mr. McLaughlin liked this and wrote "Very Good!" at the top. 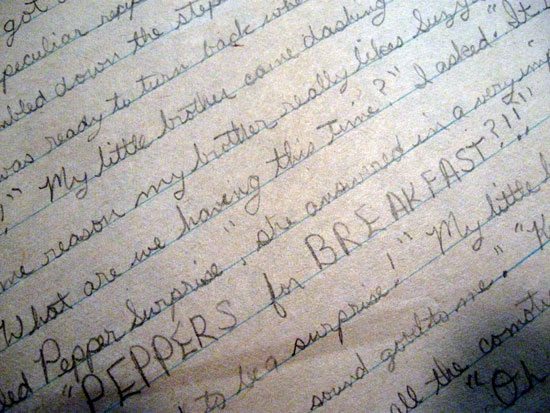 When Suzy makes our Sunday breakfast we never know what to expect. One morning she made burnt cereal. On another Sunday she made onion flavored toast. But what I'm going to tell you about is even stranger than that.

One sunny Sunday morning I woke up to a suspicious aroma coming from the kitchen. "Oh, no," I groaned. "Suzy must be making breakfast again." I crawled out of bed and got dressed. Then I started down the hall to see what peculiar recipe she was trying out this time.

As I ambled down the steps the smell got worse and worse. I was ready to turn back when Suzy called, "Breakfast is ready!" My little brother came dashing down the steps. For some reason my brother really likes Suzy's cooking.

"What are we having this time?" I asked. "It's called Pepper Surprise," she answered in a very important voice. "PEPPERS for BREAKFAST?!!" "Shh! It's supposed to be a surprise!" My little brother David broke in. "Peppers sound good to me." "Keep out of this," I told him. "WHAT'S all the commotion down here?" my father stepped into the room. "Oh, nothing, "Suzy replied. "What's for breakfast," my father asked. "It's a surprise," Suzy told him. "Yeah, a big surprise," I thought.

Suzy got something out of the pan she always uses. It was red. It looked like scrambled eggs. "What is it?" my father asked. Suzy didn't answer. My father took a bite. "Hey! This is good!" he shouted. "Now maybe you'll tell me what it is." "Here it comes," I thought. "It's pancakes." "It doesn't look like it," I said. "That's because I experimented with it. I put food coloring in it and didn't make them in the regular shape." "But you told me that it was Pepper Surprise." And then I knew what had happened. I was so used to my sister making weird things that I never thought she would make something normal (well, almost). Without saying another word, I sat down to eat breakfast.

The second piece is called "What is Excedrin Headache #56," which was clearly our writing prompt. Again, it is a prime example of my 11-year-old form of humor. Mr. McLaughlin gave this one a "Good!" I probably didn't get a "Very Good!" on this one because I wandered away from the topic at the end. Also, I think I laughed more at my own jokes than the class did.

I should note that I wrote this in October 1981, four years before the New Coke debacle. A premonition of the future, perhaps? 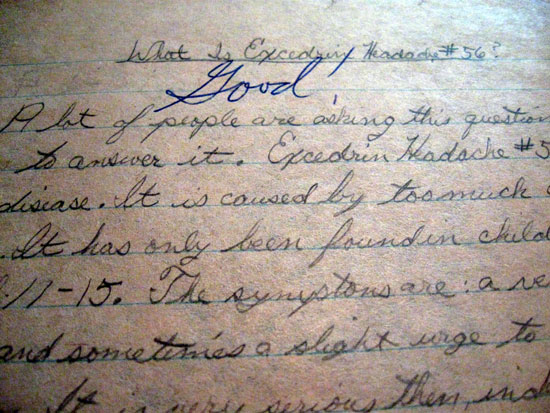 What Is Excedrin Headache #56?

A lot of people are asking this question. My job is to answer it. Excedrin Headache #56 is a new disease. It is caused by too much candy, soda, etc. It has only been found in children from the ages of 11-15. The symptoms are: a very severe head-ache, and sometimes a slight urge to clean your room. It is very serious then, indeed. If a person continues eating candy for three or four days the urge gets stronger. After a week or so the head-ache disappears and the urge becomes permanent.

The only cure is to take off and on a bitter mixture made up of castor oil, liver, spinach, squash and dehydrate plums (commonly known as prunes). This medicine now comes in a shatterproof Coke bottle. It is colored like Coke, but there is a slight difference on the label. Of coure, younger people never look at the ingredients and probably wouldn't notice that the label is marked, "Artificial Coke." You are proably wondering though why the victims wouldn't recognize the flavor. Of course we have figured that out and we flavored the mixture like Coke. The price is also thought of because nobody nowadays likes to throw money away. The price is marked lower, but when the tax is added it becomes the same price.

For those who don't like Coke, it is also sold in Sunkist, Mountain Drew, Pepsi, Birch Beer, Root Beer, and Mellow Yellow flavors, too.

My prize-winning creative writing piece was called "The Practical Joke (That Backfired)." It's nearly twice as long as the other pieces. It's mounted on orange construction paper, because for a brief time, it was on display in my classroom.

The story is about a girl who enters an old house, reportedly haunted, with her friends. Similarly, my friends used to like to explore an abandoned house in my neighborhood. I usually stayed outside, not from fear of ghosts, but from fear of falling through rotted floors! Along with Mr. McLaughlin, I agree that it's the best of the three, because I focused on telling a story, rather than just trying to be funny. 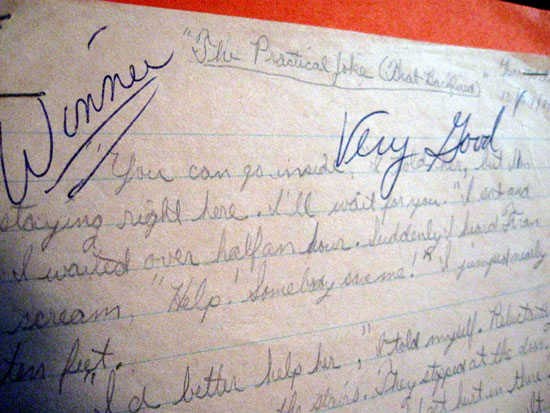 The Practical Joke (That Backfired)

"You can go inside," I told her, "but I'm staying right here. I'll wait for you." I sat and I waited over half an hour. Suddenly, I heard Fran scream. "Help! Somebody save me!" I jumped nearly ten feet.

"I'd better help her," I told myself. Reluctantly my feet moved up the stairs. They stopped at the door. "Move on feet," I urged, "She could get hurt in there." That did it. They moved on through the door. It slammed behind me.

"Boo!" Jamie yelled as she jumped from behind the grandfather clock. I jumped back and hit something. "Grrr!" it growled. Slowly I turned around. It was Fran. "Don't you two ever do that again. Especially in this house. Brrr." I shivered. It sure was cold in that old house! "You're afraid. You're afraid. Nya Nya Nya!" Jamie teased sticking her tongue out. "I am not! It's just c-cold in h-h-here."

"Well, enough is enough lets leave," Fran suggested walking to the door. "Hey! It won't move!" "Stop that make-believe stuff. Just open the door!" I could tell a faint hint of fear in Jamie's voice. "I'm not fooling. I can't!" Fran was shivering now. "Let me try it," Jamie walked over to the door. "Oh, no. It won't budge." Jamie went histerical. She started banging on the door screaming "Let us out! Help! Somebody help!" "Calm down. We'll be okay. Maybe there's another way out," I sounded calmer than I felt. "Sure. And we'll probably run into lots of ghosts," Jamie said in a trembling voice. And I thought I was the frightened one.

"There's no such thing as ghosts," Fran reassured her. I started walking. "Hey! Where are you going?" James asked in a shaky voice, "You can't just go away and leave us." "I was planning to take you two with me. But, if you want to stay..." "Oh, no! I'm coming!" and with one quick step she was with me, clutching my shoulder. "Well, I guess I'll come to," Fran stated as she strode up to my side. I still wonder whether she was only putting on an act, like me, when really she was as frightened as Jamie and I.

We started down the long hallway, Jamie screaming every time she saw a curtain move. We continued in this fashion until suddenly I felt myself faling. There was nothing I could do to stop it. Then I relized that Jamie and Fran weren't with me. But how? I heard Fran calling from above. I don't know how it happened, but after what seemed like hours I reached the bottom. The sun was just coming out. Right then Fran landed beside me. "Where's Jamie," I questioned her. "Oh, she's coming." There was a piercing scream. "In fact, there she comes now," Fran added. Out Jamie shot, screaming all the way. "Hey, look! The sun's coming up." Fran pointed out. "You m-m-mean th-th-that we sp-sp-spent the n-n-night there?" Jamie sputtered. "Well, what does it look like? I mean, it's certainly not going down. Oh, by the way, were you scared, Jamie?" "Who me?" she asked as she started running down the hill toward home, "I'm never scared."

Much to my surprise, my classmates liked it well enough to declare it the best that week. As my prize, I chose a paperback copy of Roget's Thesaurus, which came in handy for writing cryptic "thesaurus poems" in high school. Every time I pulled my thesaurus out, I remembered how good it had felt to reach someone with my words.

Moral:
Teachers who encourage creativity are the best teachers.