Naturally, the hottest week of the summer was the week our ancient downstairs AC unit died. I soon learned that, if you try to do aerobic exercise (DDR) in a hot room, you get dizzy. Even if you're running a fan. 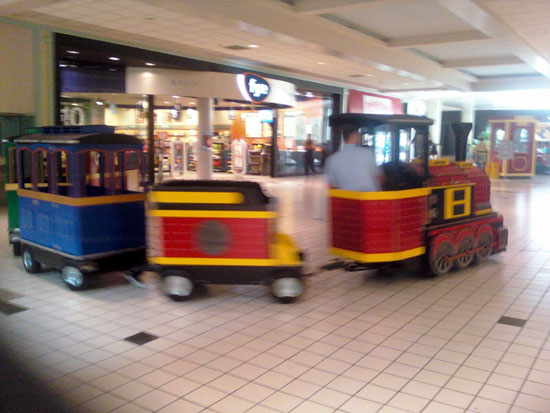 The Granite Run Mall has a new feature:
a little train for kids to ride, driven by a conductor.

So on Saturday, The Gryphon and I drove to Sears to pick up a new unit. He had calculated that, for our space, we would require 8,000 BTUs. However, they didn't sell any Energy Saver AC units in that size, so we selected a 10,000 BTU Energy Saver unit instead. To fit it into the trunk of my Ford Focus hatchback, we had to put the back seats partway down.

I was impressed to learn later that The Gryphon managed to get it onto our porch by himself. He called our landlord and arranged for him to help install it Wednesday. I guess until then, I'm working out at the gym.

After that errand, The Gryphon suggested we go to a housewarming party at the home of a couple he knows through PAGE (Philadelphia Area Gaming Enthusiasts). I already looked pretty nice, in a pair of black capris and a scoop-neck fitted teal shirt, but I wanted to jazz up the look a little, so I bought a multicolored long necklace with different shaped wooden beads in one of the boutique stores. On sale, too. Coincidentally, it hung just in the right space to cover up a few drops of soda I spilled on myself at the party. Bonus!

The Gryphon looked up the directions on his iPhone, and we stopped on the way to pick up a bottle of wine as a gift.

The couple lived in an apartment complex, surrounded with trees and greenery, and we had a little trouble finding the right building. I suggested we ask a pizza delivery driver in front if he could point us in the right direction. After all, I used to deliver pizza and know that, aside from a postal carrier, they're usually one of the best people you can ask for directions. Turns out he had just delivered an order to the very apartment we were seeking! We couldn't have timed it better.

The apartment was up a long flight of stairs (must have been fun on moving day). A number of people were gathered around a round table, playing a game (natch). I recognized a few of them, including one PAGE member who's also an Otakon staffer and a Facebook friend. He gave me a hug, as did another PAGE member I hadn't seen since her summer barbecue last year.

Everyone broke from the game to get some food. I filled my plate half full of fruit and veggies, then took one slice of white pizza. As I snapped a picture of my food, I got a couple questions, so I explained the camera diet project, and they seemed to understand.

After eating, I joined in a game of The Great Dalmuti, a simple card game. As soon as they explained the rules, I remembered playing it before. It's a fun game, if it is terribly simplistic.

It rained off and on all afternoon. During a break, the host (who reminded me of the late John Denver but with darker, longer hair) took a few of us to see the lily pond, which is in a green area between some of the buildings. It has a recently built (or rebuilt?) bridge and platform. The green glade and peaceful pond were quite beautiful, especially with the little red fish dashing between the lily pads. I hope nobody in this apartment complex lets their cats outside! 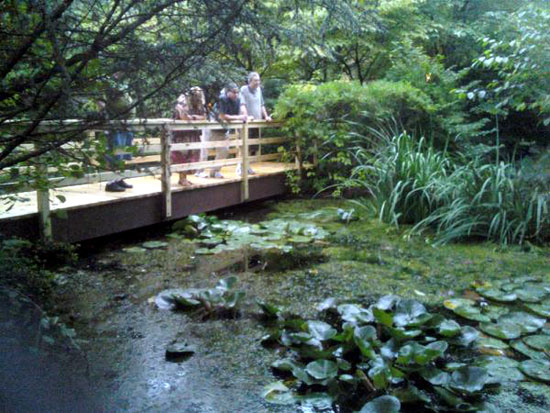 The lily pond, with The Gryphon, the host and guests on the wooden bridge 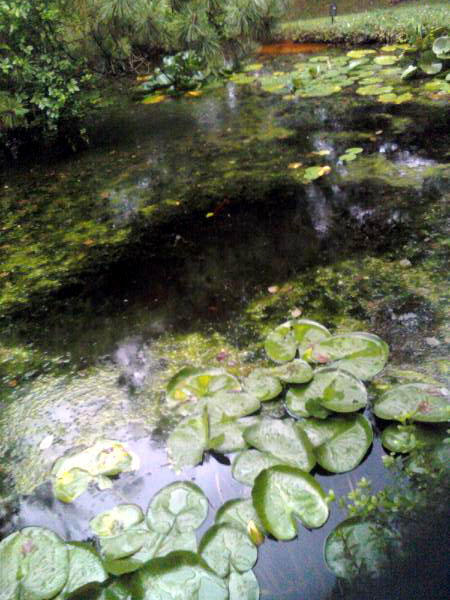 A view of the lily pads, from the bridge

Our host and hostess have an indoor cat, but I only got one glimpse of her, at the beginning of the party. She was standing at the end of the hallway, having momentarily appeared to ascertain the source of all the noise. Fur standing up on her back, she disappeared into a doorway, never to be seen for the rest of our stay.

I also played a couple hands of another card game, Fluxx, which is also a simple game and has the potential to be hysterical with the right group of people.. I played with The Gryphon and one other player, who owned the deck. I think she thought the game confused me, because I kept asking questions. That's simply how I learn: I confirm what I think I understand, to make sure it's right. She tells me there's a Monty Python version of the game, and I think I might order that to take to the next party at The White Rabbit's house.

In addition to games, there was, of course, good conversation. I talked about music for a while with a guy who had a long gray ponytail and had attended an impressive number of concerts back in the '60s and '70s. He even saw Jimi Hendrix live. Color me envious. Then again, sometimes it's good just to hear stories from people who experienced things I'll never get to see.

We stayed until the sun went down and then, since it was an hour drive, returned to our dog and cat, who were much happier to see us than the cat at the party.

Moral:
Most cats are not party animals.