I was popular this weekend, or at least on Saturday. That night, I was invited to two simultaneous events. I managed to put in an appearance at both of them.

The first was a dinner party held by Kapow's wife, whom I'll call Eeyore because of her love for that character from the Winnie the Pooh books. She was having a women-only dinner party at her place. The Paper was invited, too, so I met her at her place and we went together in her car.

The Paper's place, incidentally, was where the other event was taking place, that being a session of the role-playing game, Confed, run by her husband, The Cheshire Cat.

Eeyore lives on a residential cul-de-sac of ranch homes built in the '80s. Little did we know that this sleepy little neighborhood was filled with drama. 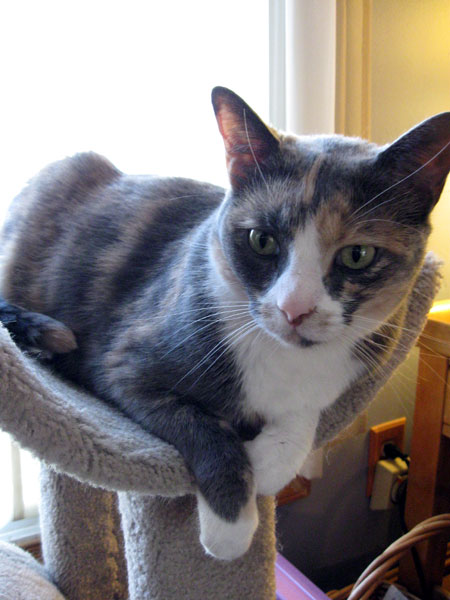 The Paper and I were two of the first people to arrive. We were greeted at the front door by Eeyore and a very friendly cat named Iggy, who happily hung out near me all night so that I could pet her.

Another guest was in the middle of a text conversation, aggravation on her face. We soon learned that her boyfriend had just broken up with her over text message, and for the flimsiest of excuses. Eeyore and I assured her that she was better off without anyone who would pull such a stunt.

Our hostess made me a fantastic blended drink consisting of orange juice, some Parrot Bay coconut rum, and vanilla ice cream. Because it was a bit strong and also because it was a bit rich, it was the only alcohol I had that night.

She also offered us appetizers of grapes, strawberries and some mini puff pastries filled with spinach and cheese. We chatted in the living room while the other guests arrived. One by one, they filtered in until we had a total of about seven. Three of them had worked together (although only one still worked at that place of employment), while one guest was a neighbor. A final guest, like The Paper and I, had initially met Eeyore through Kapow.

After we'd had appetizers, Eeyore served dinner. There were two main courses: a chicken dish from a crock pot, and cheese lasagna. In addition, there were green beans, peas, and a salad, which made me very happy. Nothing adds to my dining enjoyment more than colorful fruits and vegetables.

Over dinner, Eeyore and her neighbor regaled us with stories of the cul de sac soap opera. It was like watching an episode of Desperate Housewives (except without the affairs). From people arguing over parking spaces and cigarette butts, to somebody running over someone else's mailbox and leaving huge divots in the lawn, to the strange neighbor who walks around the cul de sac obsessively, in sweat pants and high heels. This woman complains about everything but has been spotted surreptitiously weeding for a recently-widowed neighbor.

Eeyore's dinner guest had her own story, which would be suitable for any health-care town hall meeting. Her boyfriend is now living with her and her sons. It's not something they planned to do so soon, but he was an independent contractor who had an accident, smashing up his left arm. With no medical insurance and no one to care for him, he is depending on her to provide shelter and care.

"That's why we need health-care reform," I said. The statement hung in the air, unanswered. This was not a night for talking politics.

As a group, we also shared stories about weddings, which started because Eeyore's brother is getting married on Halloween. None of us could understand why he and his bride won't be using that as an excuse for a fun, casual celebration. Yet, this will be a formal affair. Through all the wedding stories, I felt bad for the guest whose boyfriend had so recently dumped her. She smiled a forced smile and kept staring down at her now-silent phone.

Turns out she's not the one whose feelings I should have been concerned about. As we made our way to the kitchen for dessert (delicious cookies I'd made from a Weight Watchers recipe, a homemade cinnamon roll, a vanilla layer cake, and a cream pie with cherry topping), one guest revealed that she is going through a rather painful and messy divorce.

The same women who not that long ago had been sharing wedding stories now offered up advice about divorce. At one point, The Paper raised her hand and asked, "Am I the only person here who's not on my second marriage?" She wasn't, there being a newlywed in the room as well as the newly single guest, who seemed to feel a bit more comfortable as she heard other women's stories about breakups.

Many of us had both a sympathetic ear and good advice to offer, and I learned something, as well. It might not have seemed it at the time, but I realized how fortunate I'd been with both my own divorce and my parents, both of which were amicable. How lucky I am, as well, to have found a second husband who's such a perfect match.

At about 9 p.m., The Paper suggested we head out. She was driving and tends to get tired early, since she gets up early each day. We said good-bye to everyone and headed back to her place.

Incidentally, it had been raining off and on all night, but the rain timed itself perfectly for us, both on the way there and the way back. It was mild enough for us to walk to the car and accelerated while we were driving, slowing down again as we exited the car.

I intended to go inside just to share the extra cookies, but as luck would have it, I ended up staying and playing some Confed. I will write about that another day. That story, too, involves a wedding. And, I would soon learn, a bomb.

Moral:
Hearing other people's sad tales puts your own into perspective.