While going through my box of grade-school and high-school writings last week, a specific essay title caught my eye, "Who Am I?" From the handwriting, it was obviously written in high school. I dug it out today to take a closer look for today's Memory Box. 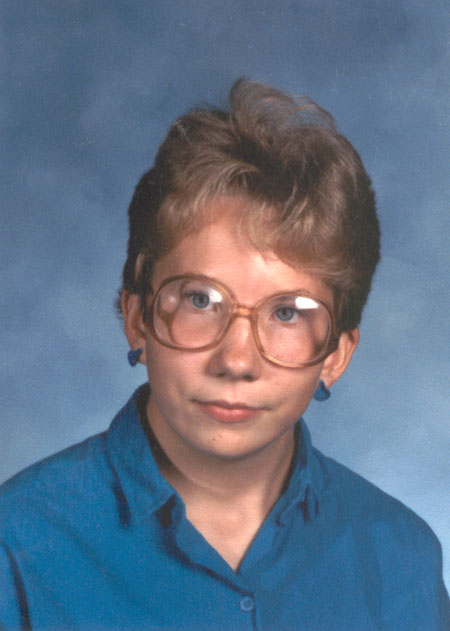 The two-and-a-half-page essay was in response to a class assignment, which I'd also kept. The assignment sheet would panic conservative pundits like Sean Hannity, who would be convinced that such a class must have involved liberal indoctrination ("They're talking about feelings... and SEXUALITY!"). However, my home town tends towards conservatism, as do most of the teachers. I'm not sure, but I'm guessing that the assignment was a way to get the students to write on a topic they knew well, and perhaps to help them think about career goals.

Write a paper describing who you are, especially dealing with the subjects that have been discussed in class. So far we have talked about values, goals, emotions, self-concept, communication, relationships, and sexuality. Even if you don't include all of these topics, the important thing is that you take time to think about yourself. Your strengths and weaknesses, your beliefs, your abilities, your goals and your view of yourself.

The paper will be worth 50 points. It is due Friday, April 3. Make sure your grammar and spelling are acceptable.

If you have a problem with this assignment see me as soon as possible. Do not wait until the deadline. 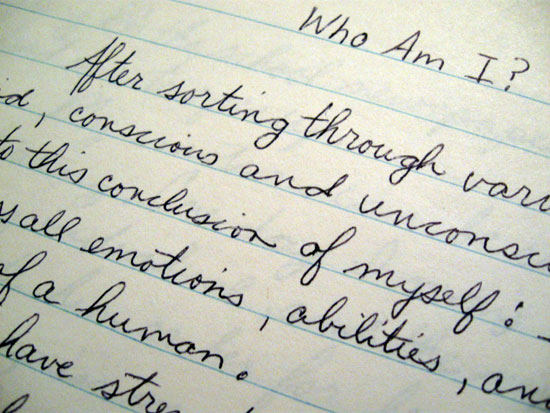 My response is hand-written, which was acceptable in those days before home computers and printers were standard. The teacher awarded me all 50 points. Reading through the essay, I'm amazed by how much of it still holds true. Then again, some experts believe that your basic personality traits are set by age 5. I've included some helpful (if a bit excessive) footnotes.

After sorting through various files of my mind, conscious and unconscious [1], I have come to this conclusion of myself: I am human [2]. I possess all emotions, abilities, and possibilities expected of a human.

I include in my values a strong belief in God, a belief in human nature, and a belief in myself. I value a sense of culture. By this I mean the cultural things: Shakespeare, Bach, Raphael, and even [Ray] Bradbury, [Joan] Baez, and [Keith] Haring [4]. A clean world tops my list as an environmental value.

In the social area of my life I am developing relationships and learning how to communicate. I have developed friendships and close friendships with both boys and girls. Beginning two years ago, when I was a counselor at a church camp, I have become more outgoing. There I learned to communicate through body language as well as through voice. Writing for the school newspaper has also helped me to open up.

My emotions can be confusing and frustrating. One day I may admire an outgoing individual, and the next day, I may hate him or her for being so pushy. I tend to suppress my anger, and when I finally release my hostility, I emerge exhausted and regretful [5].

One area in which I have little patience is sex-role stereotypes. Many people make sexist jokes about women staying "barefoot and pregnant." They ridicule any male who shows sensitivity or a love of such "effeminate" things as music or pastel colors. Although most people assure that they are "only kidding", I often feel my anger begin to rise [6].

I have set myself some goals, both immediate and long term. After I get my driver license, lose some weight, and get accepted to the Pennsylvania Governor's School of the Arts, I will breathe a sigh of relief. Until then I will pursue those short-term goals [7].

My major long term goal is to become a journalist and writer. But first I must be accepted at college and perhaps serve an internship on a paper [8].

So I have established that I am human, with human thoughts, goals, values, and emotions. Now I can begin to accept myself and other people [9].

1. Don't ask me how I explored my unconscious mind. Maybe I wrote part of this in my sleep.

2. Human, eh? You don't say! Not a squid or a gerbil? If I didn't know better, I'd think my younger self was just being a smart ass. The truth is, though, that I was giving what I considered to be a serious and considered (and ever so deep) response.

3. None of these have changed much. I'm not sure, however, why I considered running to be one of my strengths. Perhaps I thought I ought to include a physical strength, to balance out my physical weakness, the crawl stroke. Ironically, I still love to swim but haven't jogged in ages, ever since injuring my knee in college. Suffice it to say, never run on a bone-chillingly cold morning without a proper warmup.

4. I discovered Ray Bradbury through my parents' book collection and Joan Baez through my mom's records. I first read about Keith Haring's work in a magazine: possibly YM (then known as Young Miss), which was my go-to mag for pop culture and also introduced me, believe it or not, to They Might Be Giants. I loved Haring's primitive, dynamic style, such a revelation for my orderly, protected teenage self.

5. Then, as now, releasing my pent-up hostility amounted to little more than some harsh words or a snide comment. Afterwards, though, I unfailing feel guilty and wish I'd kept a sock in it.

6. Author as an Angry Young Human. Gender stereotypes are still one of my pet peeves. I believe now I understand why I chose to identify myself as simply human in the first paragraph. From my earliest days, I found attempts to identify gender based on personality traits as tiresome. If I do some things that are considered "girly," I do them because I like them, not because I'm a girl. Likewise, if some of my traits could be considered "masculine," that doesn't make me a boy. I think the best way to summarize it is to say that, as an adolescent, I both wanted to be like Superman and to kiss him. I also wouldn't have minded being Wonder Woman, but only if she could fly.

7. I did, indeed, get my driver's license, and I also lost weight. I did not, however, make it into the Pennsylvania Governor's School for writing, a bitter disappointment. Looking back, the selection process was a bit odd. We submitted writing samples and then, we semifinalists took part in a further pop quiz, if you will, where we sat in a room (in Harrisburg, perhaps — my mother might remember) and had to write a poem on the spot, using some words they wrote on the chalk board. Seems a bit random, wot?

8. Been there, done that. The truth is, I never wanted to be a journalist as badly as I wanted to be a writer. So after earning a bachelor's degree in broadcast/cable and a master's of fine arts in English (poetry), I worked for three years as a newspaper reporter/assistant editor for my hometown newspaper. By now, I could have been working in a larger market, no doubt, but the job was high-stress. I got a migraine every week, like clockwork. So now I'm just focusing on the writing bit.

9. Translation: look, I even wrote a conclusion that tied back to my opening paragraph. Give me an A, already! I'm a writer, dammit!

Moral:
The more we change, the more we stay the same.