While walking Una yesterday, I found a piece of notebook paper with an intriguing paragraph. Since it ended abruptly, I assumed it was a first draft of something that the writer started over again, possibly a class assignment. A little girl's name was written at the top.

I am 8 years old and I finily get to go on my frist mammoth hunt and on the hunt I had to stay out in the forest for one day and sleep on the grond.

"Well, that's cute," I thought. "And creative, in a quirky sort of way." I found myself wishing that I could find more of the story. Today I could not believe my luck when, walking on the opposite side of the street, I noticed a piece of yellow lined paper. At first glance, when I saw that it was also about a mammoth hunt, I thought it was a continuation by the same student. But then I found another page nearby. And another. And another. All by different students, and nearly all about this fictional mammoth hunt. Clearly, this had been a class assignment. A few of them were dated "September 30" and one was dated "September 30, 2008." Perhaps the teacher put them in the trash, and they blew away?

The assignments range in details and technical ability. I believe the paragraphs were written in response to the children learning about ancient humans. It seems they were asked to imagine a mammoth hunt and to write about it as if they'd been there and were writing in a diary.

The next one is also by a little girl and is dated "Semp 30," her mistaken abbreviation for September. This author seems to be a bit timid about the idea of killing her food. She managed to spell "mammoth" four different ways and also seemed to believe they resembled deer:

I was scared because I hate animals and if one of the hunters killed a mamatth I would just be scared because I would not have no were to go if the mamoth familie wanted to attack the hunter that killed the mammoth that why could never be a clan (?) plus the mamotth is dangreous and they couldnt kill a mammoth because of there horns that was on ther head. The hunters cooperated by helping find food and made sure if his family moved from one place to another they moved and they help put a fire together to make food. 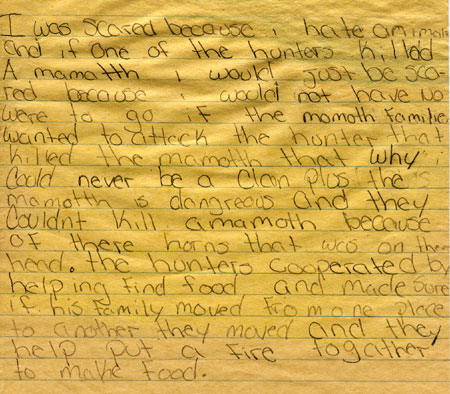 The next student, this one a boy, seems to have misunderstood the assignment and written, instead, a diary entry about his real life. Or at least, that is, if he really does have two bears. Either that or he imagines that, even in prehistoric times, there was TV. Clearly, this was spelled out phonetically. If you read it aloud, it makes more sense. It also sounds exactly the way a child might speak.

My name is S. and are go to ELEMENTARY school and are Leaf in a house and are go to school aerf day and are do my homwork and on Friday are go to herTV and are go and taerp and eat and are have two bears and we go to the baesball kert.

The next one is written by a boy but from the point of view of a girl. Despite some misspellings, it's quite well-written, including some ambitious vocabulary, a drastic injury, and even a "scrumpcios" recipe.

Dear Diary, Today I had my favorite food, Wooly Mammoth. There was a mammoth hunt. My father's friend Dave lead it. It was hard, too. You have to chase a lot of Woolie Mammoths of a cliff. Sadly he lost he leg, but it could of been worse. A Woolie steped on his leg. We had no choice besides cutting it off. My father made something he calls Que Sauce, after my grandmother's mama (ph) Quesey. He used onions, sea salt and some other things, his secret. He put the Que stuff on the Woolies. It was superior! I just call it Amy Que, after my name Amanda Quesey. I admire it when he roasts it, because I always have a colosial appitite. My meal was scrumpcios, and I'm full. Good night. Signed, Amy 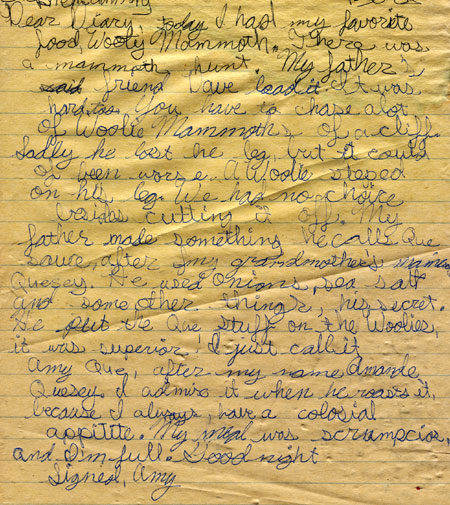 The next one is very difficult to read because it's in closely-written, light pencil. I had to adjust the contrast in PhotoShop before I could figure it out (although some of it was still unreadable). In this version, killing the mammoth is a family affair, and the protagonist, a girl named Little Lamb, is more concerned about making clothes out of the hide than about eating the mammoth.

My name is little lamb and today we finally are ready to hunt for mamoths our leader my father Big Fur is with my cousins, uncles, granpa, and brother Wolf pup is out there with his sharpest (UNINTELLIGIBLE) yet him. I'm so scared my mom Little Snow said don't worry but she is scared because this is the first time Wolf pup went out grandma said that she would take me to watch (UNINTELLIGIBLE) camp, but I have to help make cooks (?) out of mamoth hide. Besides I would rather skip that.

As me and Wise Rose my grandma walked in the cold weather (?) uphill and this is how it happened. Big fur came behind and stabbed it and others came in and started throwing sharp rocks at its head (?), then Wolf pup stabbed it in the head (?) and killed it! But I wasn't aware that (UNINTELLIGIBLE) roar left end (?) Big fur said it was forbidden to (UNINTELLIGIBLE) I ran and started helping with the hide, but Wolf pup saw my (UNINTELLIGIBLE) but then I saw that once they left they take the mamoth by and drag it to camp and cut off its hide and coat and make clothing. 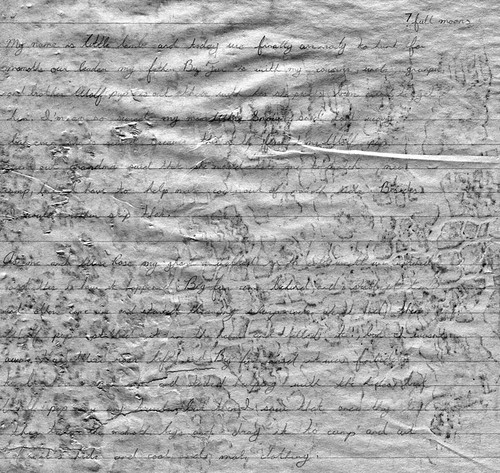 Hands down, the most entertaining one was by the final student, a boy. Entertaining, that is, because it sounds like it's written by the crocs in the comic strip "Pearls Before Swine." There are two different versions of the story, on two sides of a piece of yellow lined paper. I'm going to start with the one on the back. It reads:

One day Me and CEEF went hunt for mammoth. I was so saory (?) & poured to be a man. We found one a Big one. We cut in bottes leg he fell. I cut his tout We dirg he to the clan.

Actually, rereading that, I think that the crocs' command of the English language is superior.

But the second one made me laugh out loud, partly because of the fractured grammar and spelling (although if you read it aloud, it does make sense), but mostly because of the postscript, which reads as a "note to self" about one last important task that should be accomplished before eating the mammoth.

One day I went on a mammoth hunt. It was 4 hour an 23 min a long Day. But we found it was eat the food so I cerrp up on him cut his leg with a seep he fall on a loock so die. I was proud I killed my fist mammoth.