This has been a busy Labor Day weekend for The Gryphon and I, starting Saturday when The White Rabbit had his traditional get-together. He'll also have friends over this afternoon, and we hope to be there for part of it.

Saturday, after sleeping in, we bought ingredients for a pasta salad and whipped that together, as a team, before heading up to The White Rabbit's place. We had arranged for a pet sitter to come by and walk Una around dinnertime. 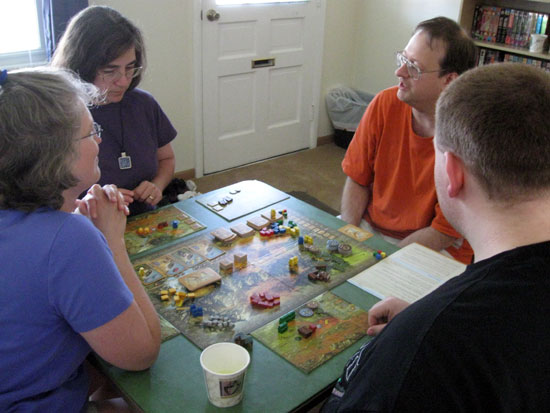 (from left) My College Roommate, The Book Lover,
The White Rabbit and another guest play a board game.

We arrived around 3 p.m., and several people were already involved in a board game, my College Roommate being one of them. She had made some chili, which I got from the kitchen, along with the pasta salad and some veggies, for a late lunch.

While the others played their game, I chatted with The Martial Artist, there with his wife, The Book Lover, and their little boy. The poor little guy was under the weather, and nothing could console him. He lay on the floor, crying, and his dad wiped his nose and tried to make him feel better. In his soft little voice he said something I found adorable. The Martial Artist asked him, "Do you need a nose wipe?" 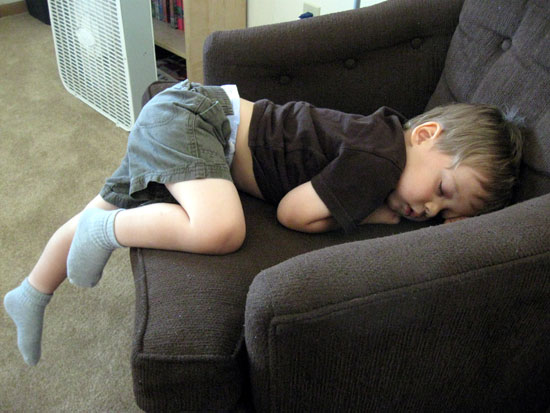 Eventually, he conked out on a chair (see above photo), while The Book Lover finished the game and the two parents packed up their belongings. At least we got to see them for a short while.

After a socializing pause, The White Rabbit asked if anyone would like to play another game, Ticket to Ride. In this one, the goal is to build rail lines between different cities. The Cheshire Cat had arrived, so he played, along with The Gryphon, me, The White Rabbit, and My College Roommate.

The game is a German board game, as we explained to Batman's Roommate, who arrived while we were playing. Shortly afterwards, Batman and The Dormouse also arrived. They sat nearby and commented on the action or joined in conversation.

The goal is to try to build specific rail lines, which can be achieved by gathering cards of a certain color, which correspondend with markings on the board. Once you have enough, you build a section of the line, placing your plastic train markers on them. Points are based on the lines built and those completed.

I thought I might win by completing a cross-country line from New York to Seattle, and getting rid of my extra trains before some had finished their lines. But The Gryphon had been working diligently and completed more total rail lines. He edged me out by three points. A match made in heaven.

Afterwards, The White Rabbit fired up the grill. The Gryphon helped him form hamburger patties and then grilled them for everyone (see photo below). 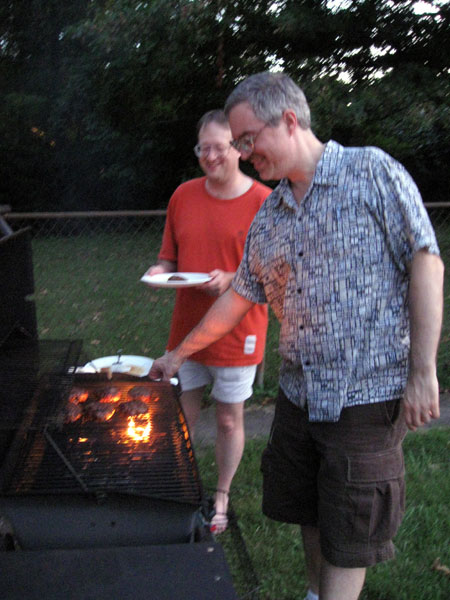 It was a pleasant night to be on the back porch, chatting. I got caught up with My College Roommate on how her life is going. The guys were talking about something that apparently required illustrations from the Web, because The Dormouse brought out his laptop. Then, since we were all getting eaten by ninja mosquitos, so stealthy you couldn't feel them landing, we went inside.

My College Roommate wanted to play another game, The Settlers of Catan. I joined, along with The Cheshire Cat. I asked The Gryphon if he wanted to play, and he declined. Then, thinking about the fact that he'd be one of the only people not playing (Batman and his roommate already having left), I asked, "Do you mind if we do it in front of you?" Then, red-faced by my verbal goof, I added, "That came out wrong. I think I need some ice" and zipped out of the kitchen for some.

The Settlers of Catan, another German board game, was non-violent with many moving parts and rules. As The Dormouse is wont to say, "I don't have OCD. I'm German." Before you can even start the game, you've got to lay out a board which consists of a number of hexagons that have to be in a certain order, with corresponding circles with numbers on top. I'm not sure why they don't just include a game board, unless it's so that people can change the board to make it more challenging.

This game depends so much on luck that a few bad dice rolls can make it difficult to catch up. Fortunately, the three of us were playing nice, none of us wanting to smash the others into oblivion, so we all laughed at the random turns of luck. We seemed to be rolling nothing but sixes, which got both of us a rock, time after time. Of course, if you get enough of them you can trade them for something useful.

I was not surprised or upset that The Cheshire Cat won, because he'd made smarter placements of his initial settlements, getting the goods he needed to complete more roads and settlements while My College Roommate and I were getting nothing but rocks. We talked about the different forms of game play, like the people we know who play in a cutthroat manner and then get slammed into the earth by everyone else!

When the game ended, I couldn't believe how much time had passed. The Gryphon told me it was about 10 p.m. Since he was falling asleep on the couch, I agreed it was time to head home. We did arrange, before leaving, to meet some people for dinner tomorrow, since The Court Wizard was going to be in town for just a brief period.

This meant postponing my birthday celebration (dinner and a movie) until next weekend, but to my way of thinking, that only stretches out the fun.

Moral:
When luck is not on your side, you get nothing but rocks.