As I mentioned in my entry on Monday, Labor Day was a busy social weekend for us, seeing friends each of the three days.

Since he was the out-of-town guest, we let The Court Wizard decide where to eat. He suggested a hibachi restaurant. Coincidentally, The Paper also had a 30 percent off coupon for this restaurant, so it turned out to be a great choice. 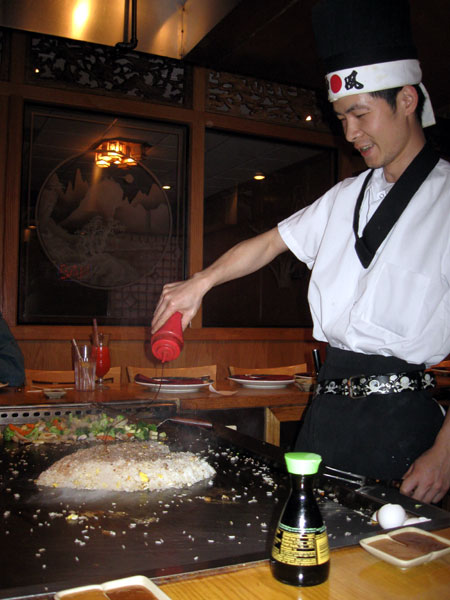 The hibachi chef makes a heart out of the rice.

It was quiet when we arrived, probably because it's a holiday weekend and many people were attending picnics and parties with friends and family. There was only one other table occupied when we arrived, so we got one entirely to ourselves.

The chef did the usual things, such as juggling cooking implements and making a volcano out of onion rings. I happened to take a photo at exactly the right time. Although the fire blew out my settings, making the picture way overexposed, it's still a good dramatic moment. 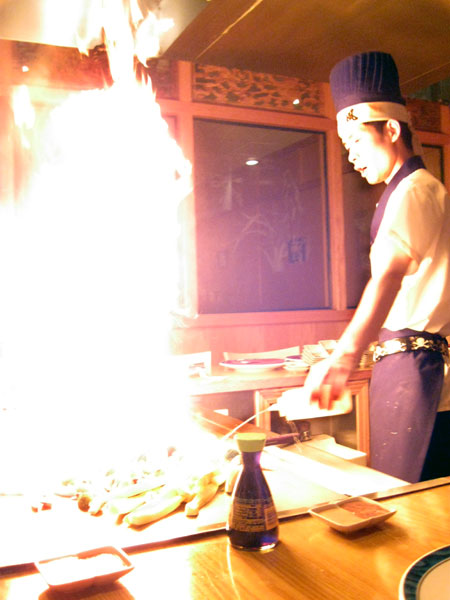 The hibachi chef shows off with a controlled flame.

The chef was young and, ironically, sort of quiet. But he made us smile, and the food was good, too.

It was nice the restaurant was so quiet, because we could actually hear each other all the way down the length of the table. As usual, we ended up discussing a range of topics, heavily weighted towards pop culture. At one point, a conversation started based on a SF series with which I wasn't familiar. This led into The Gryphon and The Cheshire Cat discussing an obscure point of military history, each of them dredging up impressive data from memory.

"I like it when you guys talk smart," I said. This was quickly followed by a stinging comment from someone that I no longer remember.

To this, The Court Wizard responded, "Great, now we're not so smart."

As long as the conversation doesn't go on too long, I always find it interesting to hear people discuss esoteric topics with authority. Maybe that's just a mark of my intellectual curiosity.

We also got into an interesting discussion about a graduate-level course The Paper is taking, for which they are discussing different modes of assessing personalities. She lamented the fact that one of the tests under discussion is no better than guesswork, the test being promoted largely by a company that gets money for distributing it. This makes it about as reputable as a tobacco industry study on the health benefits of smoking.

When the professor discussed outmoded forms of methodologies, The Paper brought up phrenology, a term which stumped the rest of her class. It did not, however, stump our dining companions, all of whom are quite brilliant.

After dinner, we all ordered desserts. I shared a green tea ice cream with The Gryphon. It wasn't quite what we were expecting, tasting a little too much of honey, we thought. At least it didn't taste artificially sweet, which would have been worse.

Afterwards, we hung out at the home of The Cheshire Cat and The Paper. Although we were talking about such topics as astronomy and different canonical readings of the Bible, there were plenty of laughs. The Gryphon and I left after he started falling asleep in his chair.

On Monday, Labor Day, The White Rabbit had another get-together at his place. There was a good chance, it being a holiday, that some of the shows I transcribe every night would be repeats, but I could get no confirmation of that ahead of time and had to work around my usual schedule, giving me only about three hours with friends. I shouldn't complain, though, because The Gryphon couldn't go at all. He had to stay behind to make sure something got done for work.

Since I hadn't had time to cook, I bought two barbecued chickens from the grocery store on the way.

When I arrived, a number of people were hanging out in the living room. To my surprise, although there were more people there, I believe there was less food than on Saturday. There were however, more bottles of soda and packages of hamburger buns, so I think I know what people brought.

The AMV Editor offered to carve one of the chickens, which was good, since I was hungry (it being past my lunch time). I tried a little of that, with some carrot sticks and some homemade hummus.

Attending the party, in addition to The White Rabbit and The AMV Editor, were The Cheshire Cat, The Court Wizard, The Dormouse, The Video Editor, and a couple friends of The White Rabbit I'd met at a previous party. They were three guys in their 20s, along with the wife of one of them. Also attending were The Martial Artist, The Book Lover, and their son, who had recovered from his illness and was his usual happy little self.

The White Rabbit was busy in the kitchen, with the help of The Cheshire Cat, making some hamburger patties for the grill. They were basically using just meat, no filler, with some spices added.

The Book Lover was reading a book to her son on the steps, and he was engrossed in it. 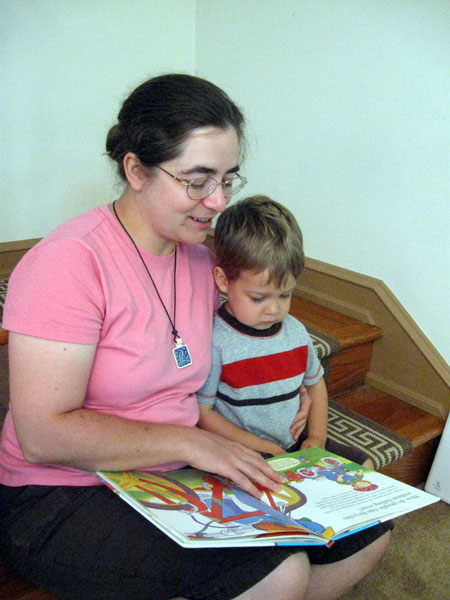 The Book Lover reads to her son.

For a little while, I talked to the wife of one of the younger guys. She's a cyclist. Turns out she knows my friend The Cyclist but doesn't know her very well, only by her considerable reputation in cycling circles. This particular woman, however, wasn't a competition cyclist, which is why she doesn't know The Cyclist better.

She initially mistook me for The Cousin, which happens all the time, despite the difference in our heights and ages. Apparently, it's our similar hair and glasses.

I learned that she's also in the health-care field, so we talked about the Obama health-care plan. She's in favor of it and is exasperated with the pointless dialogue that's been going on this summer over nonexistent issues such as "death panels."

That led to talking about my job, transcribing cable news and the things I hear on a regular basis from right-wing commentators. At this, The Book Lover said she doesn't know how I do it.

I shrugged. "It pays the bills."

A new game of Fluxx was starting, so I joined. Playing were also The Court Wizard, The Martial Artist, The Dormouse, and for at least a couple hands, Batman. As I thought it would be with this group of people, Fluxx was fun. We weren't just playing to win. Instead, people often played cards because they thought they were funny. At one point, we had rules in effect that had us drawing two cards and playing four, with the winning condition being that you had to have 10 cards in your hand! I was the one who placed the card setting the winning condition, laughing maniacally as I did.

At this point, The Court Wizard remarked, "Yes, I'd heard this game can go on forever. Now I know why."

We had fun, but after three hands we were done. There's only so much you can laugh.

By then, the burgers were ready, so we moved onto the back porch to wait our turn. I let other people go the first time around, since I wasn't terribly hungry. If you're wondering why I was having a burger, I've started eating red meat again (as part of my current attempt to get more protein). This is a good thing because of, as I mentioned, the almost complete lack of food that was not meat-related. 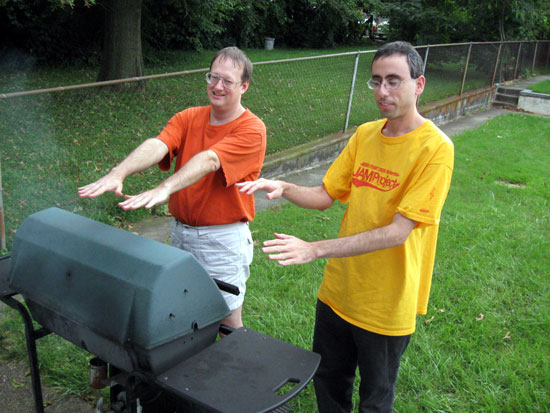 The White Rabbit and The Court Wizard
warm their hands over the grill.

The Video Editor is working on a new fan parody, and he was urging everyone to give him funny lines he could use. Of course, when someone finally did say something he thought was worth using, he had to borrow a pen and paper from someone!

He did get what I felt could be a few related jokes. At one point, I poured myself some iced tea from a bottle that had a huge chunk of ice in the middle. When I asked how the bottle got frozen, someone offered that it was in the cooler, sitting next to some dry ice.

"Why did you use dry ice in the cooler?" I asked The White Rabbit.

The answer, in unison, came from The Cheshire Cat and The Court Wizard: "Because it's awesome!"

This, I told The Video Editor, could work with an earlier line that he'd just jotted down. When one of the 20-somethings left, he waved and said, "I'm leaving because I'm allergic to awesome."

Really, all he has to do is invite a bunch of these guys to a writing session. I guarantee he'll come away with some great material. I've been writing comedy with them for <gasp> 20 years.

Sadly, I couldn't stay much longer, due to the constraints of my evening schedule. As Murphy would have it, when I got home, I learned that three of my usual transcription assignments were not needed, since they were repeats. I could have stayed an extra three hours.

Moral:
All it takes to impress me is a good vocabulary and a grasp of esoteric knowledge.