It was another busy weekend for The Gryphon and I, although this one involved work as well as fun. Saturday was mostly work, as we attended the election meeting for Otakon.

We got up bright and early, dropped the dog at the sitter, and arrived in Baltimore in time for the board of directors' meeting (The Gryphon being a member at large). 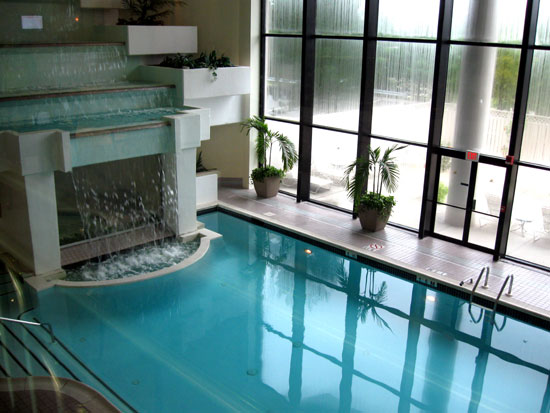 We didn't get to swim in this fabulous pool
while at the election meeting at a Marriott in the Baltimore area.

I sat in on the meeting, having nothing else to do. But I was disappointed to discover the wireless Internet access was limited, and all the codes had been distributed already.

This meant that, during the portions where my attention and input were not required, I couldn't go through submissions for Wild Violet, as I'd planned.

Instead, I chatted in the hallway with Batman, who was similarly disappointed at the lack of Internet access. He was there just to participate in the elections. Even though this is his last year at Otakon, he cares about the future of the organization.

We joked about how we should have brought cream pies, so that if there were any tense moments during the meeting, we could start a cream-pie fight. But as it turns out, there was only one contentious discussion, over a personnel issue. The lack of cream pies resulted in the discussion being civil and relatively drama-free.

During the drier part of the board meeting, I worked on a poem, figuring I might as well do something constructive.

I actually thought we were running over in terms of time regarding the general meeting, but since they skipped a break, we started the election portion of the meeting exactly at the scheduled time. (I, by the way, made a run to a nearby Starbucks to pick up lunch for The Gryphon and I.)

We did, however, have so much discussion about some of the positions that we ended up running over our time and, since the hotel booted us out of the meeting room, had to finish the elections in the hallway for the members at large positions.

While I won't go into details about the election process, I will say that I am very pleased with the new crop of officers, which includes Vyxle as president, her fiance Hellbuny as recording secretary, and my wonderful husband, The Gryphon, as the comptroller. In addition, The Dormouse is serving on the board of directors as a member at large, as are The Godfather (who will also head Relations again) and The Laughing Man. As former Otakon presidents, they all offer valuable insight into the organization's history, as well as practical insight into the running of the convention. 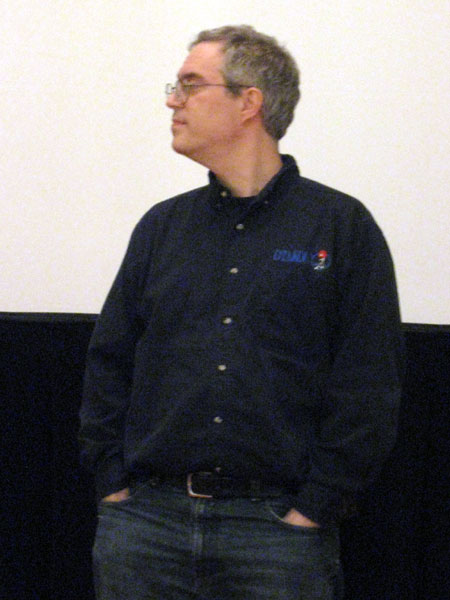 The Gryphon listens to his opponent
for the Otakon comptroller position.

I felt that the staffers, both old and new, were asking relevant questions of the candidates, participating in reasoned discussions about each office, and casting their votes after careful consideration of each candidate. It made me feel good about the future of this organization.

Since I started working for Otakon in 2001, there have been multiple shifts in leadership. Typically, one crew of people steps up and makes their way through the elected offices before burning out. At this time, people often panic, saying, "Who can possibly take over?" But always, new people step up and express willingness to lead us forward. It gives me hope.

Afterwards, The Dormouse asked The Gryphon and I to join him, Batman, and The Plushie for dinner. I stipulated that it had to be someplace we could get seated and served quickly, since we needed to get home at a reasonable hour to pick up our doggie from the dog sitter. He suggested the Mongolian Grill in Columbia, and we agreed. He gave us directions I believe he obtained from the front desk, which were printed up from Mapquest.

Unfortunately, Columbia roads are not terribly well-marked, so even with directions in hand, we got lost and had to call The Dormouse, who put The Plushie on the line, who as a local was able to give us better directions.

Even though it took longer than desired to get to the restaurant, everything else went smoothly. Our friends had already secured a table, so then all we had to do was order drinks and wait in line to choose ingredients for the cooks to grill up for us. I opted for a mix of noodles, peppers, broccoli, tofu, and a small amount of chicken, along with some spices and a little chili oil (well, a little too MUCH chili oil, I should say). In addition, I got a salad and finished off with some fruit and a little pudding. I was happy to get all the vegetables, because often on Otakon meeting days, I don't eat terribly well.

We weren't the only staffers to choose that restaurant. No sooner were our bowls delivered than The Godfather arrived, with a crew that included Vyxle, Hellbuny, the head of Exhibitions, the head of Industry, and a few other people.

I was glad that we got to spend at least a little down time with friends after all that business.