Although my birthday was on Tuesday, The Gryphon and I celebrated Sunday.

He got me a card during the week, which I thought was sweet because it made reference to what I wrote on my birthday, where I said that, while Tuesday's child is full of grace, I'd never fit that description.

On the front, it shows a still life of an embroidered clutch, a high-heeled satin sandal, and a beaded necklace. It reads, "You are style and grace."

Inside, it says, "You are beautiful. Happy birthday." To this, The Gryphon added, "Yes, you are. All of it. I love you."

As far as a gift was concerned, we waited until Sunday to go shopping. I'd requested a food processor, because I often make recipes that call for them. In such cases a blender, which is only good for liquid concoctions, simply doesn't do. While I do have a mini food processor, a gift from my Mom, it has a small capacity, forcing me to process food in batches.

The Gryphon had done some research online and determined Sears was a good place to shop. They're getting a lot of business from us this year: two air conditioners and now a food processor. Luckily, they were having a sale on all the kitchen appliances. We compared the relative merits, and The Gryphon used his iPhone to check some online reviews before we made a selection. We went with the Hamilton Beach Big Mouth 14-Cup Food Processor. The term "big mouth" refers to the large opening, not because it's an appliance for gourmands.

I hope to use it for the first time this week. Perhaps tomorrow.

We had dinner reservations, but we finished at the mall quicker than The Gryphon had anticipated, in part because we decided not to stop at Radio Shack to pick up a special battery for the front doorbell. It had mysteriously stopped working a couple days previously and now, just as mysteriously, was working again. The Gryphon called the restaurant and had them move our reservation earlier.

Of course, this meant that we got stuck in traffic on Broad Street. Surprisingly, though, we were only five minutes late for our new reservation time. We ate at Chifa [SITE HAS SOUND], which was participating in Restaurant Week. This is when restaurants across the city offer special meals and special deals.

We followed the hostess downstairs to a table in the basement area, which also includes a bar and lounge area, with low seats and red cushions. Our section was lined with gold, 3-D tiles with loops, making them look like little safety deposit boxes. I wonder how many people try to open them. (I did.) 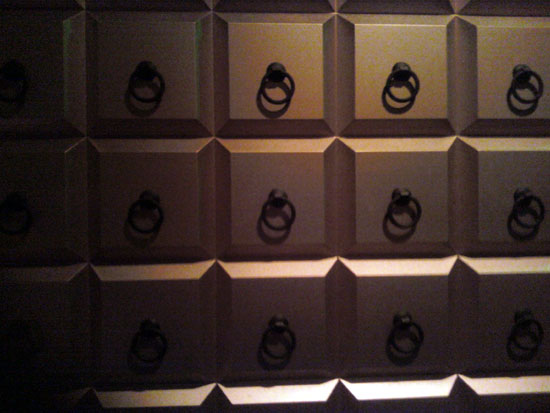 The gold wall in the basement seating area of Chifa

Chifa specializes in tapas, which was one reason I chose it. I thought it would be fun to sample different foods. The Restaurant Week menu allowed each patron to choose two first courses, two main courses, and one dessert. Of course, we chose eight different choices and each of the two available desserts. This turned it into something of a tasting menu.

We both loved the Pork Belly Buns, which were served as an open sandwich, or a deconstructed pork bun. I also loved the Red Curry Del General, which had an elegant blend of spices, counterpointed by coconut milk. Everything we tasted, though, was a treat. The only dish of which I was not terribly fond was the Beef Noodle Bowl, which was a little salty for my taste.

I also had two glasses of wine, one red and one white. This was also part of the Restaurant Week deal, the two glasses together being offered at a discount.

As we were enjoying coffee, The Gryphon used his iPhone to consult movie theaters in the area. We saw that Ritz 5 was playing September Issue, which we'd been talking about earlier that day, after seeing The Devil Wears Prada on FX. The documentary follows the staff of Vogue as they prepare a big issue, featuring Ann Wintour, who is a partial inspiration for the Meryl Streep character in The Devil Wears Prada.

Since we had a little time before the movie, we got some coffee from the Cosi on Fourth Street and then relaxed on a bench behind the First Bank of the United States, which is also where I took my self-portraits on my birthday. 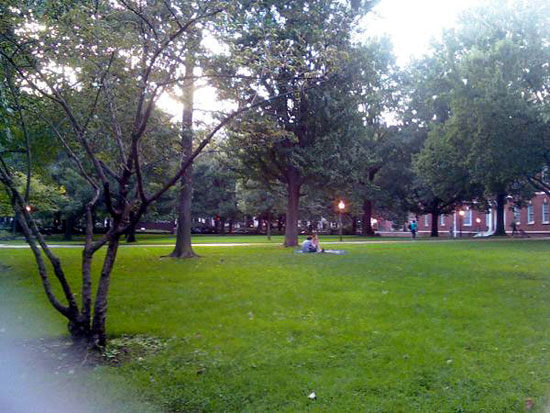 The park behind the First Bank of the U.S. 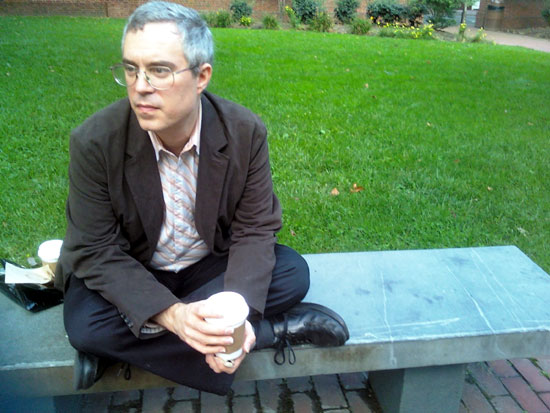 The Gryphon, perched on a park bench

As we walked to the theater, I found a plaque on a building that I'd never noticed before, which drew my attention because it referred to a famous relative. James Wilson, signer of the Declaration of Independence and one of the first justices on the Supreme Court, was the brother of my direct ancestor, who if I remember correctly, was a farmer. (My branch of the family tended to be farmers and doctors.) Interestingly enough, this connection does not come from the Wilson side of the family but from my paternal grandmother's side, the Marshalls.

The sign (pictured below) reads, "On this site, in 1779, resided James Wilson, a signer of the Declaration of Independence, and a leading lawyer in Philadelphia. Having represented certain Tories accused of treason, Wilson incurred the wrath of patriotic elements after the British army left Philadelphia. These feelings culminated in a riot in which the mob fired on Wilson's home and killed several persons." 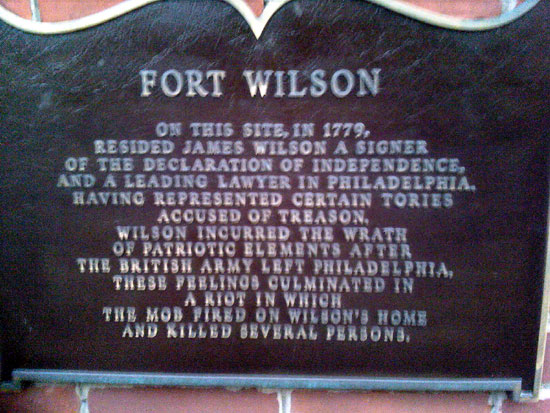 Grandma Heritage (my grandmother had remarried many years after my biological grandfather's death) had never told me about this particular incident. I find it a bit disturbing that somebody who was simply following the newly-established legal code in this country would be subject to such mob violence. Truly, though, I'm not surprised Grandma didn't tell me about it. She only passed down stories that she felt added to the honor of our lineage. She left out a lot of the good ones.

We were the first to show for the movie, and I thought we'd have the theater to ourselves. By the time the movie began, it was pretty full, at least in the center section.

The first part of the movie drags a little bit, as it introduces the viewer to the workings of the magazine. Increasingly, throughout the movie, the principle figures open up and reveal more about their thoughts on the process. My favorite was Grace Coddington, the magazine's creative director. She's the one with the thankless job of choosing outfits for proposed shoots, which editor Wintour goes through, getting final say on what to keep and what to lose. Coddington often manages the photo shoots, with Wintour deciding what photos will make it into the magazine.

Coddington was a fascinating character. Here she was, working at the biggest fashion magazine in the world, dressed always in a simple black dress and comfortable wedges, her long red hair puffing around her like a mane. A former model who had worked at the magazine as long as Wintour, she was just as strongly opinionated and did not easily give up. The movie showed that she really cared about the artistry and found it frustrating when Wintour cut beloved photos.

By the end of the film, the movie is less about Wintour as the "most powerful woman in America" but more about the interaction between Wintour and Coddington, how that friction and counterpoint makes the magazine a success.

They are very different women. Wintour is always guarded. Except for micro expressions, she tries to keep herself in check. Coddington hides nothing. A spirited romantic, she strives always to create beauty.

On the way back to the car, we saw a few signs that said, "TO SET #2." We saw some security-type guys sitting in a parking lot, blocked off with orange cones, next to one of Philly's famous murals. This is one of my favorites, a mosaic of a young boy, called "The Lincoln Legacy Project" by Josh Sarantitis. I watched it being constructed, back in 2006. There's been a lot of filming in Center City Philadelphia this summer. Can't wait to see what results.

We stopped at one of the famous art installations on Chestnut Street, "Woman Looking Through a Window," by George Segal, which sits outside an office building between 6th and 7th streets on Chestnut. It shows a woman (who as it turns out, is quite small) peering through a window
frame.

Since it seemed appropriate, I stepped into the art. 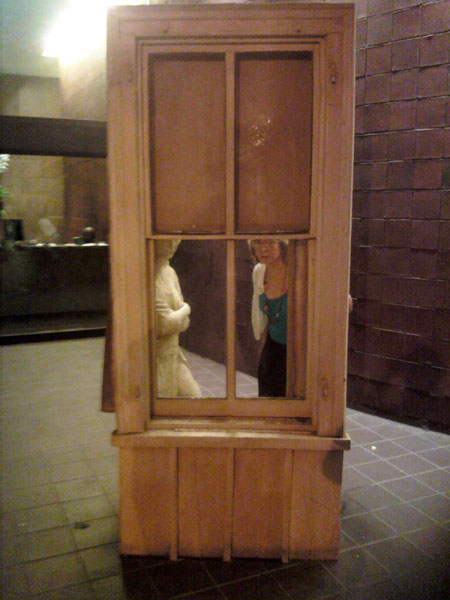 Moral:
Style and grace require their own form of strength.