As you may or may not know, I've been having troubles with my computer for the last month or so, which has led to constant frustration and has impeded my ability to do anything but my most pressing work.

This weekend, The Gryphon fixed all that. 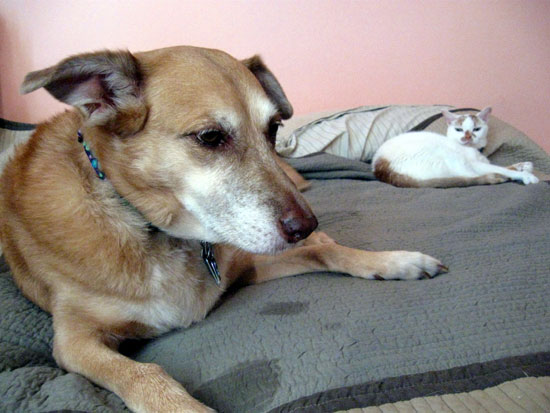 Una and Luke hang out on the bed

First, he uninstalled Norton Antivirus and my other anti-spyware and anti-adware programs, which were apparently conflicting with each other. Instead, he installed a trial version of Kaspersky Anti-Virus, for which he'd heard good reviews.

That seemed to solve most of the problems, but I still experienced a couple crashes that seemed related to Internet Explorer, so he installed an updated version of Firefox and told me to use that instead. Wouldn't you know it: I haven't had a crash since!

Needless to say, I was extremely relieved to learn that my problems were all software-related, because I'd feared a major hardware malfunction, which would lead to all sorts of trouble and expense. That's one of my best birthday gifts ever.

We had a fairly quiet weekend, working on personal projects. One of them was to finally hang up the clock that The Gryphon gave me as an anniversary present last year. We are striving to stick to the symbolic anniversary gifts (either the traditional list or the modern list), since it gives us a focus. Last year, I went with the traditional gift of paper, getting him a framed drawing of a gryphon, done by an artist friend. He got me a clock that's reminiscent of Salvador Dali's artwork, which is especially significant since we saw a Salvador Dali exhibit together at the Philadelphia Museum of Art several years ago. 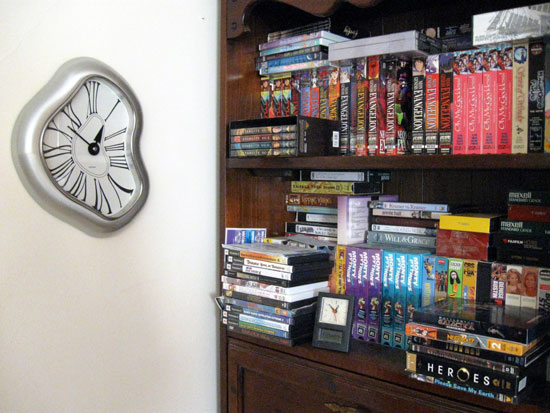 The Dali clock, next to our over-stuffed video shelves

At long last, we also put away the plates that my father had given us for a wedding present nearly two years ago. They are in the Fresco pattern, which according to the Web site is apparently no longer stocked. Good thing he got us two boxes, or eight total settings. That's plenty for now, and if we want to get more plates later, we can buy a complementary pattern.

In order to put them away, we had to decide what to move out of our cupboard, which we then boxed up until I speak to a friend who might want them. I'm not sure she will, since none of the large plates match. They were acquired by the two of us, haphazardly, over the years. 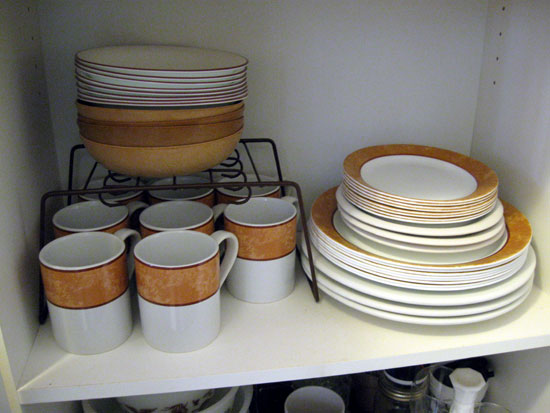 Our new plates on their shelf 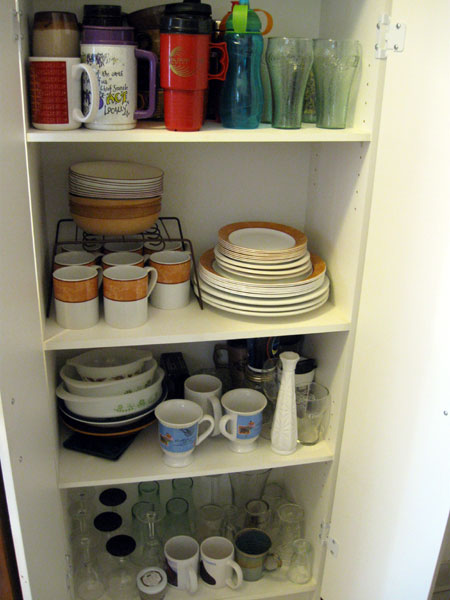 A view of the entire cupboard

My only disappointment was to learn that these new plates, being modern plates, are somewhat larger than the plates we were using. I reminded The Gryphon that we need to remember to give ourselves reasonable servings, rather than simply filling the plates, or we'll be eating anywhere from 1 1/2 to 2 times more!

Speaking of eating, we went out for breakfast Saturday at IHOP and then stopped at a local farmers' market, where we picked up some produce. We also heard a band, Patrick's Head [SITE HAS MUSIC], who were a folk duo. They also play Irish folk music, although that morning they were sticking to originals. 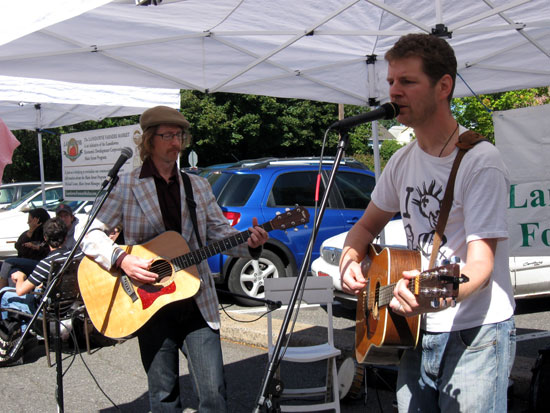 The band Patrick's Head perform at the farmers' market

That evening, The Gryphon made us a nice dinner from the produce we bought, consisting of whole wheat pasta, chorizo, mozzarella, peppers, onions, broccoli rabe, and mushrooms, along with some spices. It was delicious.

Sunday, we ate leftovers from IHOP in the morning and in the evening, went out to Charlie Brown's Steakhouse, where we used a coupon I'd received for my birthday. It's the birthday that keeps on giving.