The plan yesterday morning was, first, to stop at Kohl's to pick out an outfit to wear when my husband, The Gryphon, and I celebrate our anniversary this weekend. Then, to stop at the bank and post office, and finally to stop at the grocery store. All of this was to be accomplished in time for me to do my regular afternoon transcription assignment.

That was my plan. The universe had other plans. It had something to do with Murphy's Law. 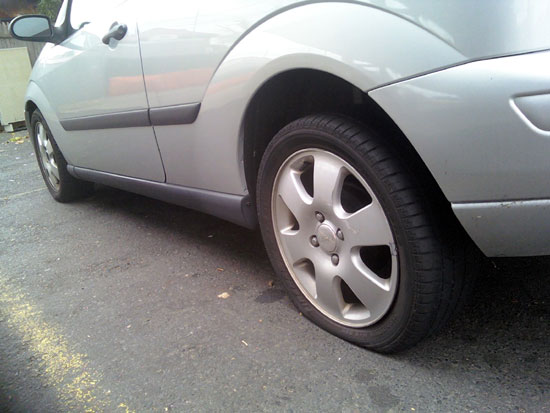 As I was pulling out of my driveway, I noticed my tires seemed a little low, so I stopped at an Exxon station to fill them.

All was going well until I got to the back rear tire, which would not take any air. In fact, I couldn't even get a reading off it, as there was very little air pressure left in the tire. It had deflated almost completely on the way there.

No problem, I thought. I'm at a gas station. I've got a jack in the back. Why don't I take a crack at changing it myself? If I can't do it, I'll either ask inside for assistance or call the AAA (Automobile Association of America, for those who might not know).

While I did manage to figure out how the jack worked, that's where my efforts stalled. No matter what I did, I could not get the lug nuts to budge. That's when a guy in his '40s or '50s sauntered over, holding a cup of coffee, and told me that I needed to lower the car so that the tire was still resting on the ground. That way it wouldn't spin as I tried to remove the lug nuts.

"Good tip," I told him, and after lowering the car, I tried again. Still, no luck. He took a crack at it, but he also couldn't budge them. The jack, it seems, which had come WITH THE CAR, was not a great fit for the hole inside the hub cap. Despite studying the wheel carefully, we could not figure out whether the hub caps were supposed to be removed (I suppose at this point I should have consulted the owner's manual, which I'd previously consulted with the jack, but I didn't think of it.)

The only thing the man did figure out was that the lug nuts had plastic caps that had to be removed. When I drove my 1988 Ford Ranger, Red Arrow, nothing was this complicated.

At this point, I had to face facts that it was time to call AAA. The Good Samaritan stuck around, talking to someone on a cell phone in his car, until I told him they were on their way. The funny thing is that two other men tried to assist me. One drove a service van and thought he might have a tool that would help but wasn't carrying it that day. The other offered to try to muscle it, but I assured him it wasn't necessary.

Of course, if I'd been on the side of a road somewhere, I would have just called AAA and sat in my vehicle, but here was a public space with security cameras everywhere. I figured as long as I didn't accept any offers to drive me to a garage somewhere, I was OK. You don't transcribe as much cable news as I do without thinking of such things.

With 35 minutes to wait, I had to kick myself that I hadn't brought either my Sony digital voice recorder or the mini notebook I frequently carry. I had not a scrap of paper or anything to read. Finally, I bought a diet Mountain Dew and three local newspapers in the gas station.

I'd barely gotten through the first paper when I heard my voice. I looked up to see my unlikely hero: a heavyset guy in a red AAA shirt. He'd just pulled his tow truck into the parking lot. I explained the problem, and he said there was no worry. He had the proper tools and would take care of things.

Sure enough, he had a fancy pump that worked by hydraulics. He also had a crossbar lug wrench (I'm sure there's another name for this). It fit the hole in the hub cap better and provided more leverage. I have one at home, which I used to carry with my truck. I ought to carry it once more.

Up until this point, I was kicking myself. If only I'd brought the right lug wrench, I could have done it myself. But then he informed me the wheel was frozen in place because of a combination of accumulated salt and rust. He knew this before he even got the tire off, because he'd seen it so many times. The only way to release the tire was to hit it several times, with a lot of force, from behind with a rubber mallet. I don't believe I have one of those.

By the time he was tightening the lug nuts on the donut spare, he was dripping with sweat. I finally admitted to myself that perhaps, even with the proper tools, I couldn't have done it myself. This guy weighed at least twice as much as me and no doubt has superior upper body strength, and it was a big effort for him.

He gave me the standard warnings about driving too fast or hitting pot holes with the donut spare, and getting the regular tire fixed as soon as possible. I thanked him and tipped him generously.

Of course, this completely threw off my schedule for the rest of the day. I did manage to make it to Kohl's for the outfit, but then I had to dash home for my afternoon assignment. Afterwards, I went to the auto dealer to have the tire fixed (turned out I'd run over a nail). And then I just barely had time to stop at the grocery store before having to eat dinner and get ready for work.

Today, I managed to complete the errands I'd meant to run yesterday, as well as a completely different errand: getting a renal ultrasound to figure out what's going on with my left kidney. As I lay on the table with my shirt pulled up, the tech moving a gel-covered device over my stomach, I thought, "Well, this isn't how I imagined my first ultrasound."

She wouldn't tell me anything about the results, but I saw what seemed to be a marble-sized dark spot on the screen. My doctor was supposed to receive the results this afternoon, but I haven't heard anything today. So I'll call tomorrow and find out the diagnosis and the next step.

That is, unless the universe has other plans.