Even though our actual wedding anniversary is tomorrow, The Gryphon and I celebrated Saturday. I work weekday evenings, so we won't be able to do much tomorrow.

The Gryphon, true to form, tried his best to make it the best anniversary he could. On his suggestion, we went to the John Heinz National Wildlife Refuge again with our doggie, Una, in the morning. We took a walk around, and I got some more pictures. 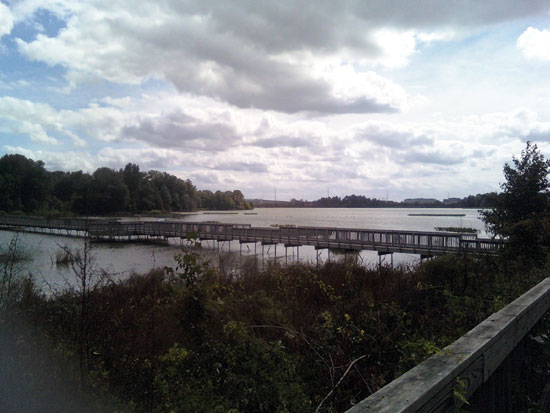 The boardwalk across the Impoundment
(cell phone pic)

It was much cooler than it had been the last time, which meant there were more people. There were also fewer birds, but I think that has more to do with the time of year than the temperature. We did see many ducks, geese, herons, and swans.

This time I brought along my old Honeywell Pentax, primarily because it has a telephoto lens, and I thought it would make for better wildlife pictures. Of course, it had been so long since I used it that the battery which operates the light meter was low. As a result, I'm certain the resulting photos will be off, probably overexposed. I'll know once I pick them up later today from CVS.

One of the biggest challenges this time around was that there was an extended family there with about five or six children. Most of the kids were good, but one little girl was fascinated by Una and kept trying to run up and pet her. Finally, I told her that it wasn't a good time, because Una was excited about being in the park, and she stayed away. She did, however, call out "Doggie!" every time we crossed paths.

I also took some photos with my digital camera, and even with my phone camera, so even if the others don't turn out (which is, sadly, extremely likely), I have at least a few pics. 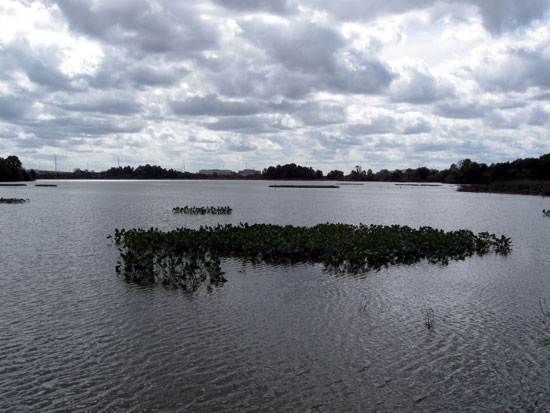 A view of the Impoundment from the boardwalk. 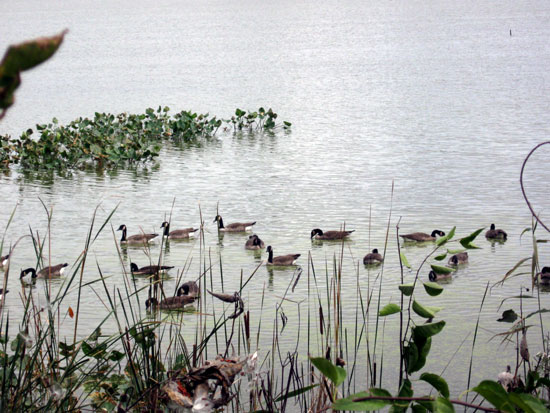 These ducks on the Impoundment were the only wildlife
I photographed with my digital camera. 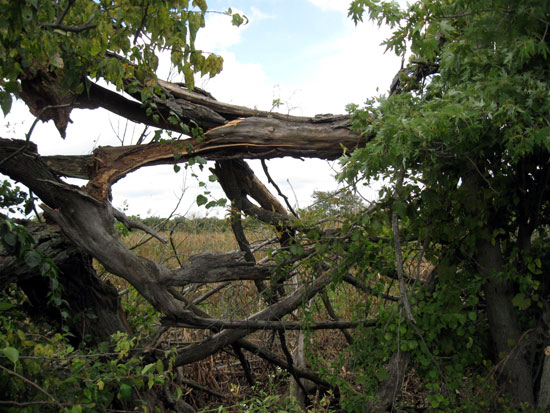 Some fallen branches form a crisscross. 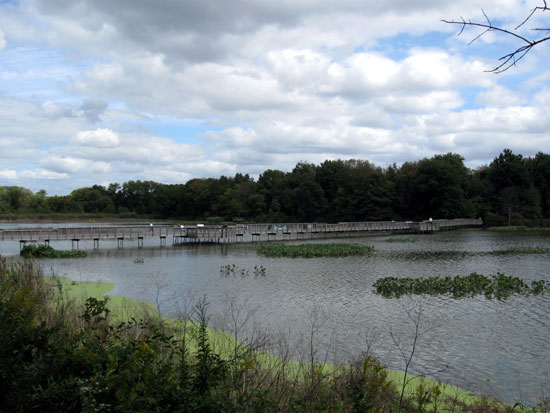 A shot of the boardwalk over the Impoundment, on our way back. 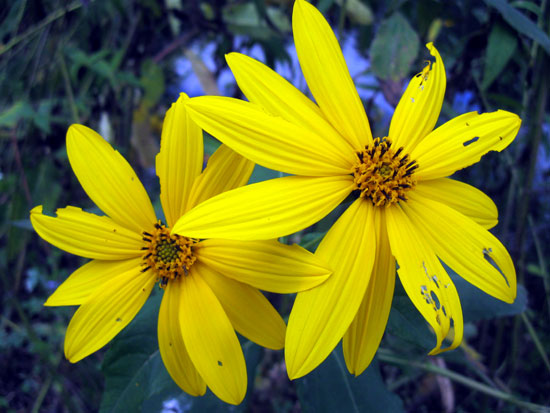 A close-up of two sort of ragged-looking yellow flowers
which had been blowing in the breeze. 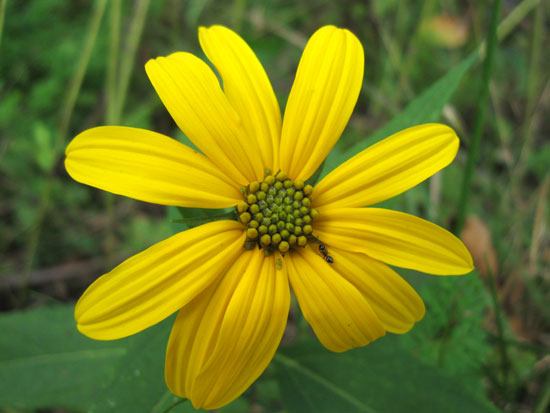 A close up of a bright yellow flower. 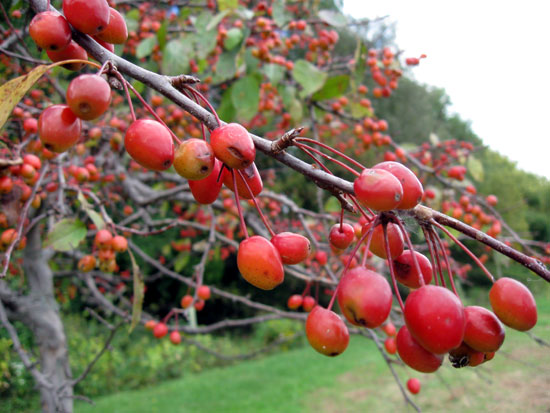 This tree with bright red berries was right next to the parking lot.

We took a nice, leisurely walk along the same path we took the first time we visited. This time, because it was cooler, we were able to go farther. Una wasn't exhausted from the heat but, instead, cheerful and bouncy.

It was beautiful in the morning, which was lucky. As it turned out, it rained that evening and for the rest of the weekend.

For our evening out, I wore the new outfit I'd bought at Kohl's. It consisted of a violet halter dress with an empire waist and a fitted top, along with a very dramatic short-sleeved gray sweater with scalloped edges. You can't see in this photo, but I also wore some lime high-heeled sandals. 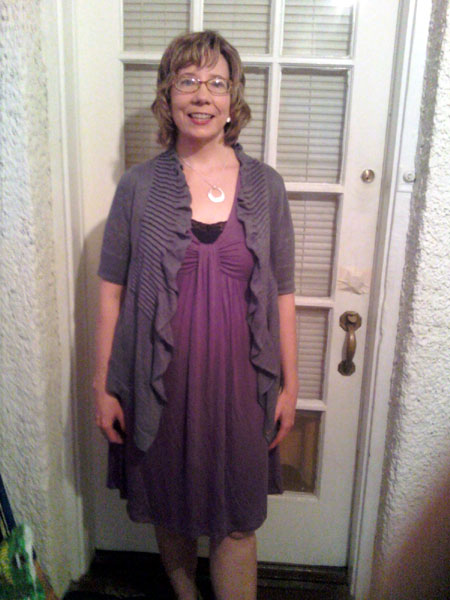 The Gryphon had made reservations at Pod [SITE HAS SOUND]. I'd suggested it, because it has the same kind of retro '60s feel that we had tried to achieve at our wedding and reception. We were last there about two and a half years ago, while we were looking for ideas. 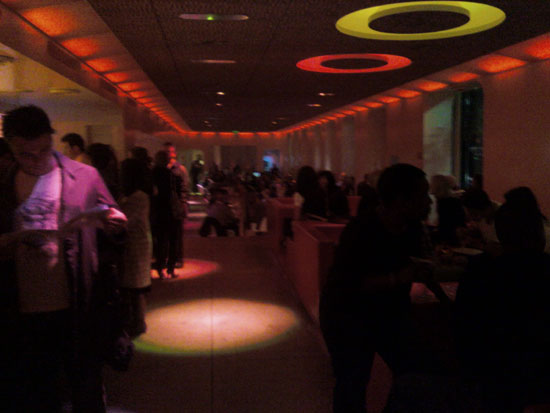 The brightly light bar area in the front of the restaurant. 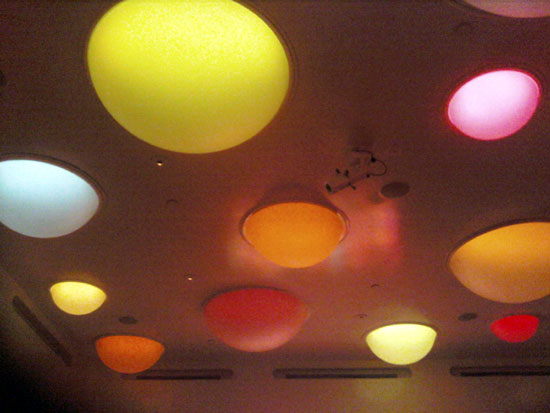 The colorful half-sphere lights on the ceiling of our room.

They sat us at a table in the back section, where a series of cubes arranged in a rectangle lit up with different colors. We started off by trying some of their signature drinks. I had the Zen and Tonic (Zen Green Tea liqueur, Hendricks gin, tonic water and cucumber. The Gryphon had the Samurai Jack (Jack Daniels, raspberries, honey and mint leaves). They were tasty. We split an appetizer of Kobe Beef, served with ponzu and wasabi and cooked tableside on Japanese river rocks. That was incredible to watch: the thin slices of meat sizzled as they cooked on the smooth, heated rock.

For my main entree, I had the Glazed Chilean Sea Bass, which was served with Japanese sweet potatoes. The Gryphon got, as I remember, the Pork Shank. We also each got desserts. I had a special which was a pear that had been dipped in batter and fried and dusted with cinnamon and sugar, served with caramel and, I believe, a hazelnut cream. It was very good. The Gryphon had the Wonton Love cheesecake, which they served with a sparkler in it, since it was our anniversary. 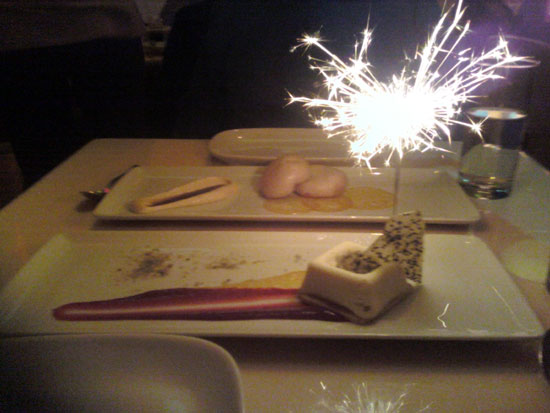 The cheesecake with the sparkler in it.

For that moment, it felt just like our wedding reception again; a perfect way to celebrate.

Moral:
You know you're in love when the rain doesn't ruin the evening.