My sister and her husband visited this weekend. It was the first time we'd seen them in person for several months. They arrived Friday night, but of course, I was working at that time. They watched some TV with The Gryphon and then hit the sack.

Saturday, the plan was to go to the John Heinz National Wildlife Refuge in the morning. But by the time we finished eating the delicious breakfast of scrapple and homemade pancakes, courtesy of The Gryphon, it was raining outside. However, Weather.com said it was only supposed to rain in the morning, so we figured the best thing to do would be to wait out the rain and try to go in the afternoon.

We amused ourselves for a little while by taking cute pictures of our dogs, "reading" my sister's book. My sister's dog, Emma, took to it more naturally. We had to keep tapping the floor near the book until Una finally looked down. 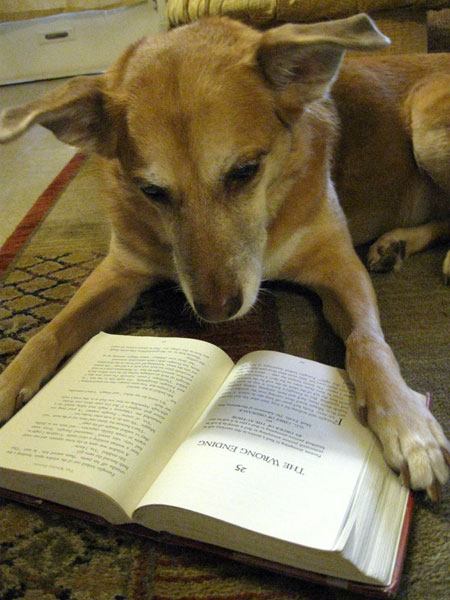 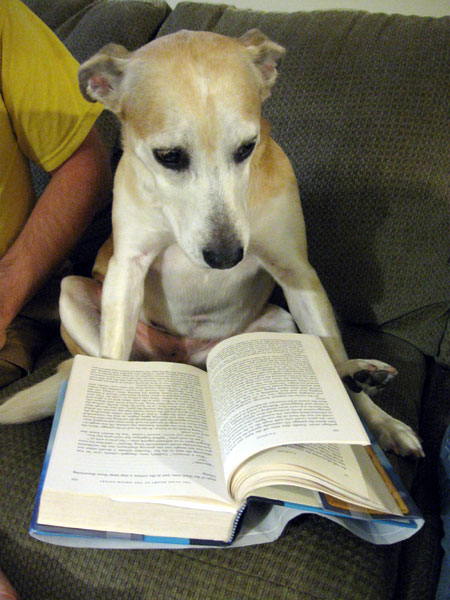 In the meantime, I suggested we go to the local K-Mart to look for a pastel sweat suit my sister could use for her Halloween costume, a Care Bear. Her husband came along, but The Gryphon stayed behind. First, we thought we wouldn't find what she wanted. There were sweatsuits on the rack, but they were dark-colored velour. Finally, we noticed some shelves containing various colors of sweat pants and tops. She found a pink one, although she had to get a larger top than she needed, since they didn't have it in her size. Trying it on in the dressing room, she told me that even though she knew it wasn't the most flattering outfit, it was really comfortable.

By the time we got home, it was actually pretty nice, so we packed up the dogs, some water bottles, binoculars and my cameras (both my Honeywell Pentax and my Canon PowerShot A590 digital camera). We loaded up in my sister and her husband's Saturn, because we wouldn't have all fit in the Ford Focus.

This time, The Gryphon wanted to try hiking on the opposite end of the refuge from where we had been going, just to try something different. On this map, we entered at the parking symbol on the far bottom left corner. Before, we entered from the parking area near the Cusano Environmental Education Center, at the top right corner of the map.

The entrance was an unobtrusive parking lot off Route 420. If I had know what that end was like, I would have suggested going to the end we knew better. While the place we'd been before has a nice, wide path, a boardwalk, and a good view of the Impoundment, where geese, ducks and other water birds frequent, the less cultivated end had a rough narrow path, part of which ran along the highway. When we finally reached a body of water, there was Darby Creek on one side and the muddy Marsh Restoration Project on the other. The muddy water didn't attract many geese and ducks, although we saw some fly overhead.

My sister and her husband appreciated the park anyway. They pointed out frogs they heard and looked for snapping turtles. I think I was the only one who was disappointed.

Still, I managed to get some pictures of flora and fauna. We also spotted a very large snapping turtle swimming down the creek, which made my sister very happy. Here are the best photos I got with my Pentax. I'll share more photos later this week. 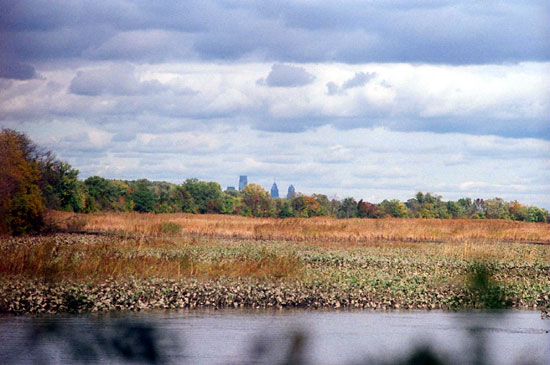 The Philadelphia skyline is visible across the muddy marsh,
filled with dried grasses and a far line of deciduous trees, starting to turn fall colors. 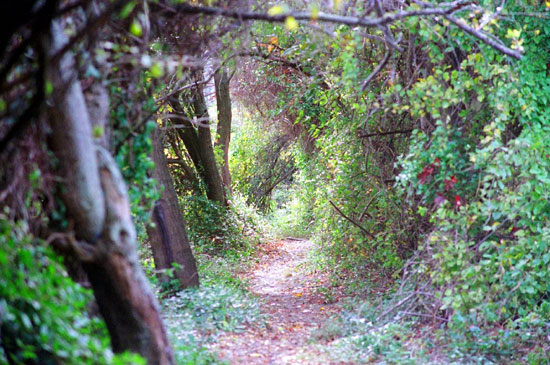 The path we traveled, which at points was lined with a thick mass of green vines. 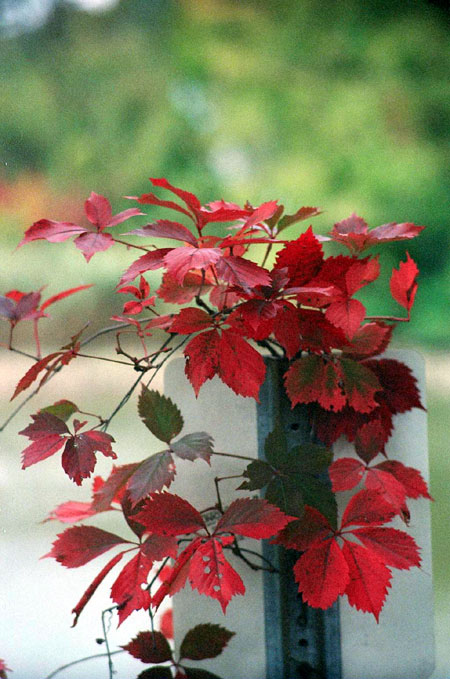 A red vine climbs up a sign in front of Darby Creek.

My one successful picture of flying geese for this trip,
against a partly cloudy sky. 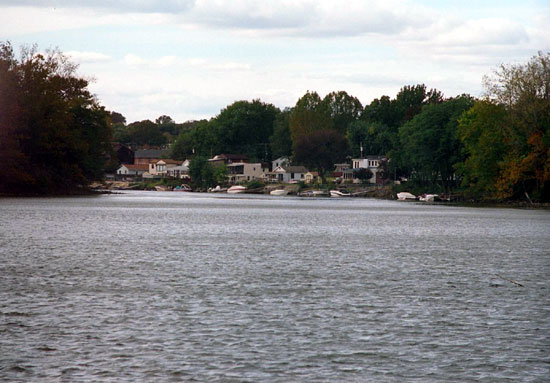 We paused in front of Darby Creek on our return for some pictures with my Canon PowerShot. 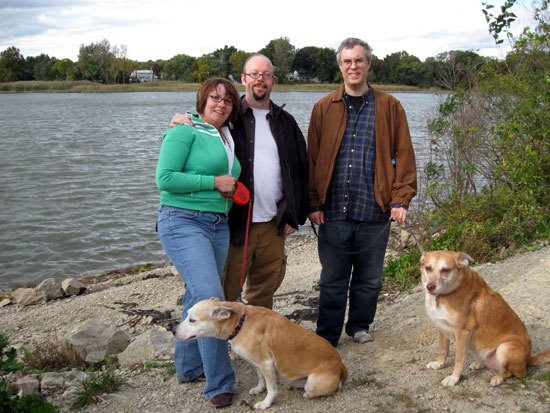 (from left) My sister and her husband with their dog, Emma,
and The Gryphon with our dog, Una, in front of Darby Creek. 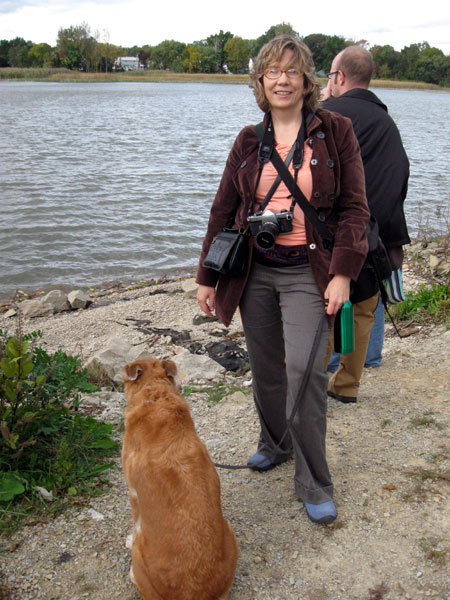 Me and Una in front of Darby Creek. My sister's husband is in the background.

On the way back, we took a different path, which was muddy in parts. We had to ford it carefully, and I had to hold up my new pants so they wouldn't drag. But fortunately, we managed to make it without too much damage.

We returned home with just enough time for my sister and her husband to prepare for a dinner date with an old friend of my sister's husband, who lives nearby. The Gryphon and I went out to eat at DeMarco's in Clifton Heights, a little Italian restaurant. I had the crab cakes, which were crispy on the outside and tender on the inside with mostly crab meat and not a lot of filler.

Since my sister had talked about coming back at 7, we made sure we were back before then. As it turned out, they returned by about 8. My sister and I went to the local Blockbuster store, then, to rent a movie. We rented Year One, because we like Jack Black and thought it might be funny.

Of course, my sister didn't get all the way through it, because she put on the sweatsuit she'd just bought and got way too comfortable, falling asleep on the couch, then excusing herself to go to bed.

The Gryphon and I, and my sister's husband, watched the movie all the way through. I thought it was pretty good. In particular, I liked the fact that it didn't rely on a lot of stupid visual jokes but more on humor through dialogue and situation. Michael Cera, who delivers lines in a very understated way, was a good counterpoint for Jack Black, who tends to be over-the-top.

Sunday was just a quiet day. Again, The Gryphon made us breakfast. This time, a frittata with zucchini and cheese, again with scrapple.

In the late morning, my sister and I took our dogs for a nice walk around the neighborhood. Both dogs were well-behaved and enjoyed it.

For lunch, we all went to the Llanerch Diner. For the first time since we've been going there, we had slow service. This was annoying, because my sister and her husband wanted to get on the road.

I tried one of their Black Angus burgers, the Cordon Bleu Burger. It was pretty good, but I wasn't overly impressed.

As soon as we got back from the restaurant, my sister and her husband had to pack up and go. I hope they had a good time. We might not have done a whole lot, but at least we spent some time together.

Moral:
When you're taking guests somewhere, go for the familiar.